Stephen Harper, the Terrorists, and the Canadian Demockery 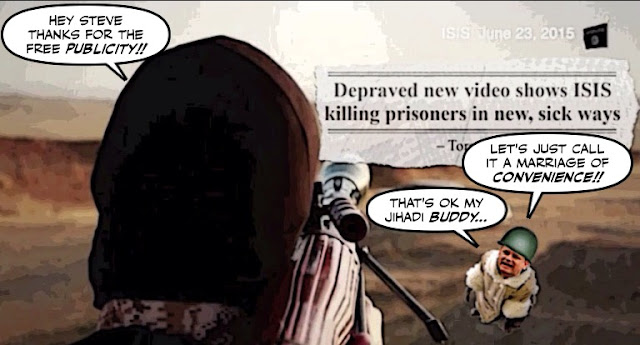 Well it's been three days since Stephen Harper and his Cons teamed up with the beasts from ISIS to make that ghastly attack ad.

And even though it starts with the sinister ISIS national anthem, and goes downhill from there, they still haven't been arrested for promoting terrorist propaganda.

Even though Harper is a repeat offender. 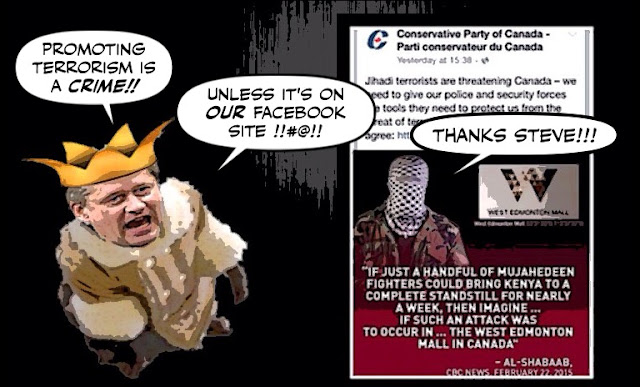 The terrorists need him to give them publicity, make them sound bigger than they are, so they can recruit more followers.

Stephen Harper needs to make them sound like a real menace, so that he can try to scare more Canadians into voting for him.

Even though he is the greatest terrorist menace this country faces. The only one capable of destroying it.

But then why should we be surprised? When as Michael Harris points out, he's the leader of an army of jailbirds.

Given his personal selection of Porter, Bruce Carson, Patrick Brazeau and Del Mastro, it’s a fair question: does this PM have an infatuation for jailbirds?

Who thinks he's above the law and is turning this country into a demockery.

Another giant step towards Canadian demockery.

Because he just can't help himself... 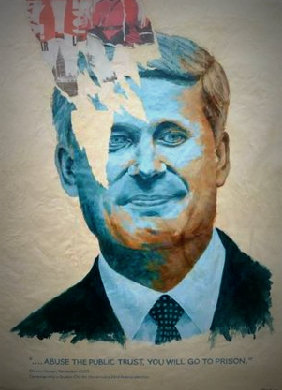 Some people tell lies to conceal the truth; the Conservatives tell lies because they have forgotten what the truth is.

And he thinks he can get away with ANYTHING.

And the good news? I think his criminal behaviour is going to cost him the election.

Because when a Toronto streetcar driver stops his vehicle near a busy intersection to get out and sign a petition against Bill C-51... 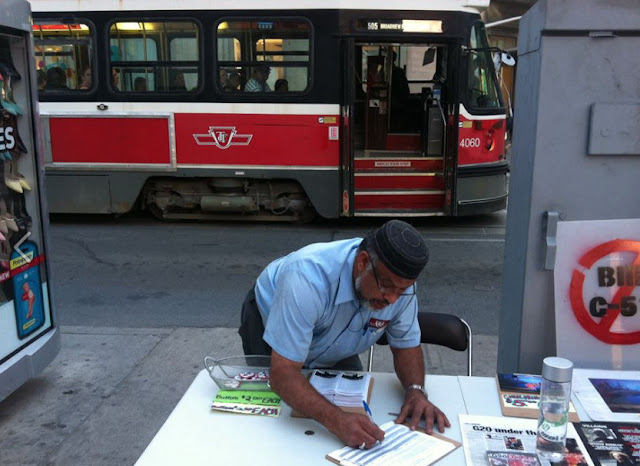 And you read so many letters like this one in the newspapers.

When is Stephen Harper going to learn that blind loyalty to him isn’t half as important as being honest? I also wonder when all members of the press are going to stop slavishly following Harper around, hoping for some little crumb of a quote when most of us don’t care where he is or what he says.

I am really tired of the deterioration of my country’s standards and the chipping away of our democracy so that one person can wake up every day feeling in control. Mr. Harper, I can hardly wait until October when you face all of the voters whose jobs and rights you have so easily destroyed.

You know a popular revolt is brewing.

And that with every passing day more and more Canadians are determined to get rid of him. 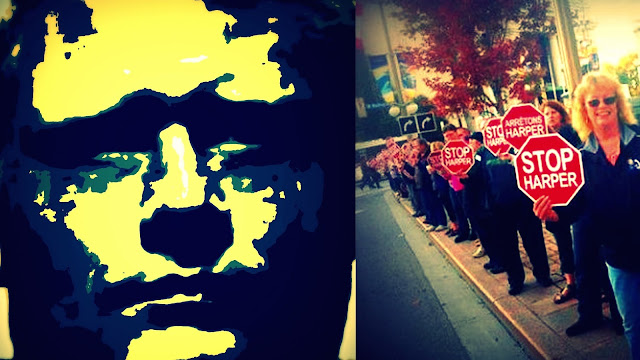 His criminality, his depravity, his lies, his hypocrisy, the very sight of him disgusts them.

Time is his worst enemy. Followed closely by himself.

He has run out of history.

And the day of justice is coming... 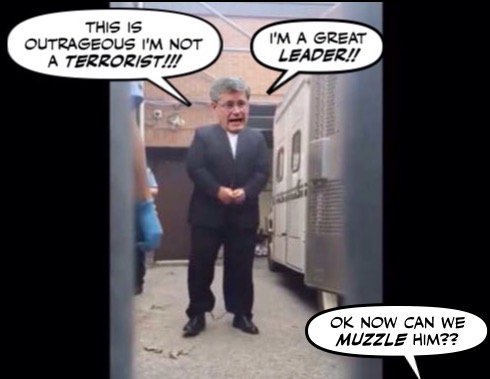 Look backwards, not just forwards. Inquiries into the harpercons' serial crimes, and then, genuine consequences for this scum.

I hope to see many posters circulating on social media that include Harper's 2012 quote about Del Mastro (below) along with a 2015 photo of Del Mastro being led away in handcuffs and leg shackles.

When the prime minister was asked about it in the House of Commons a week later, he spoke up for Del Mastro, saying “Mr. Speaker, as we all know, the honourable member for Peterborough has submitted all of his information to Elections Canada. . . . The member of Parliament not only won that election but has since won a subsequent election. He serves his constituents and this House honourably, and I think we all should treat each other with a little more consideration than that.”

I would say Mr. Harper has an uncanny knack of judging character. He willingly surrounds himself with individuals who share his unethical approach to politics. The traits he most admires in others are the traits he sees in himself.

Mr. Harper willingly stood by Dean Del Mastro because his animus towards Elections Canada is ingrained within his psyche. He dates back to his time at the NCC when his organisation took EC to court over the limits placed on third party advertising.

Mr. Harper has nurtured the toxic culture within the CPC and he has fostered the attitude within the party that rules are made to be broken and anything goes just as long as you win. He sets the example and he leads the way. The direction all comes from him It really is no wonder why Stephen Harper attracts like minded individuals who have little compunction for bending the rules.

hi thwap...you're right, but the problem is that there list of crimes is now so long, it's hard to sum it all up in a written article or for that matter a video. It needs to be boiled down into the kind of short shocking messages that can penetrate the insane din we live in. The Cons are pretty good at doing that, but the progressive parties can't seem to see the forest for the trees. They need to be able to frame the Cons far more effectively and powerfully than they have so far....

hi anon...thanks for the link. I especially like the sign "Be a good neighbour don't Harper." Of course if I put that up on my street where everyone votes progressive, I'd have a lot of indignant neighbours at my door, with flaming torches, accusing me of slandering them... ;)

hi anon....don't worry, that Del Mastro perp walk is going to be in just about every attack ad. When the guy was Harper's parliamentary secretary, how can we miss? But you're right, Harper is responsible for creating a toxic culture. And he is now reaping what he sowed, His faithful flunkies in the PMO may still stroke him or stoke his vanity. But they are losing touch with reality. And in an election campaign that could really hurt them...