Stephen Harper and the Great War on Pensions 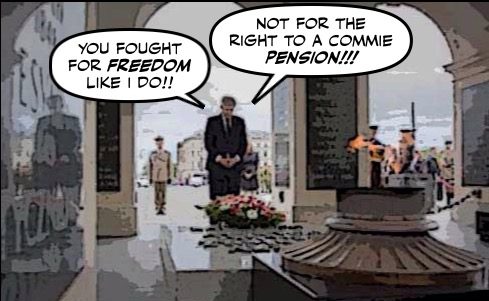 Well there he was in Poland yesterday, relentlessly pursuing the ethnic vote again, by portraying himself as the fearless leader of the Great War on Russia.

And the champion of freedom and democracy.

Even as the Senate rammed through his totalitarian anti-terror bill.

Which will kill OUR freedoms and turn us into a police state,

But at least on the Great War on Pensions front, Stephen Harper did suffer a serious setback.

Because as I wrote about recently his vague promise to strengthen the CPP with voluntary contributions is just a scam.

One that the Cons themselves rejected five years ago as being unworkable.

When the idea of allowing Canadians to make supplementary voluntary contributions to the Canada Pension Plan in order to enhance their retirement benefits came up in 2010, former MP Ted Menzies was the parliamentary secretary to minister of finance Jim Flaherty.

Both trashed the notion. “We have ruled out ideas we collectively determined cannot work,” Menzies told the House of Commons. “The verdict was unanimous. This was not a good idea.”

But the Harperites are now desperate.

And their not so new not so great Finance Minister Joe Oliver, will say or do ANYTHING to try to win the next election... 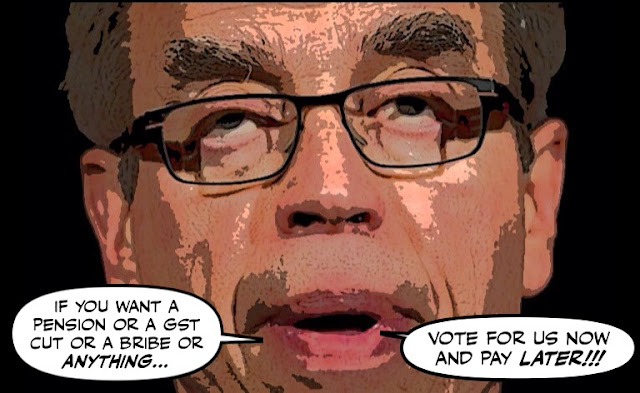 And that hasn't stopped their massive propaganda machine, from attacking  opposition plans to strengthen the CPP with small but mandatory contributions... 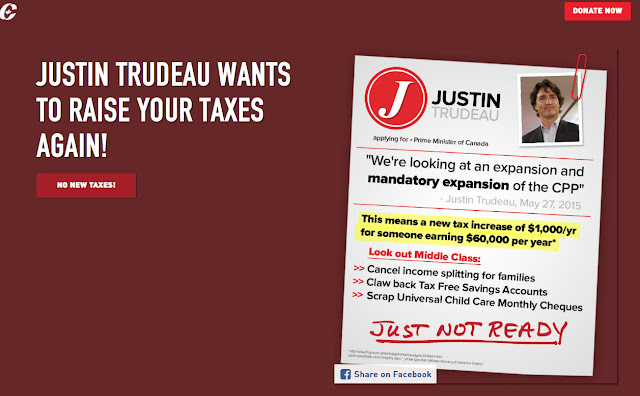 By portraying it as a massive tax grab, when it's no such thing. And every line in that new ad is either a complete distortion or another Big Lie.

So I was really glad to see that according to a new poll most Canadians believe that contributions should be increased.

A majority of Canadians agree that Canada Pension Plan contributions should rise so that benefits can be increased, a new Forum Research poll says. The survey found 59 per cent of respondents favour the increases, while 25 per cent disagreed, and 16 per cent had no opinion.

Including many Con supporters.

Even among Conservative supporters, the party that has in the past resisted the idea, 50 per cent of poll respondents favour the idea of increases, while 36 per cent were opposed.

And that most of those polled know a scam or a Con artist when they see one... 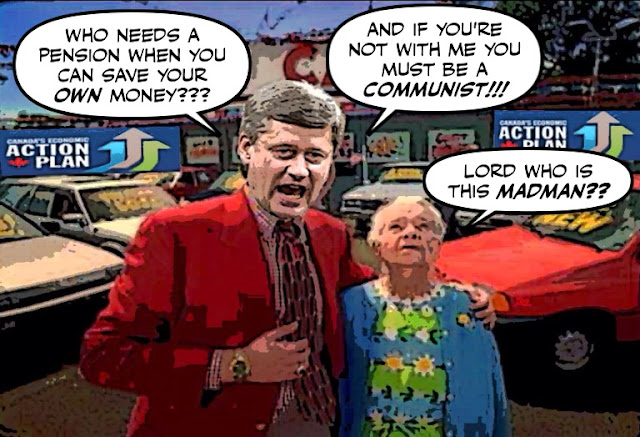 The Forum poll found nearly one half of voters (47 per cent) view the Conservative government’s voluntary plan as an “election ploy’’ while 31 per cent see it as a genuine attempt to help Canadians save for their retirement.

Which couldn't be better news, for we will be able to use that against them in the next election.

When we remind Canadians that Stephen Harper will NEVER keep his promise to strengthen the CPP.

Because he doesn't believe in pensions... 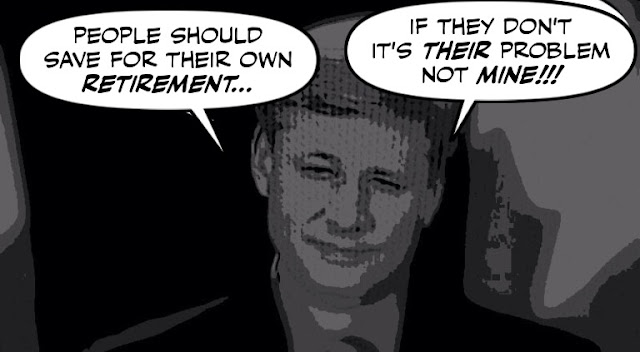 So his phony plan will come back to haunt him, as will his plan to turn us into a police state.

And they will both help defeat him, by helping us portray him as a cold cruel maniac.

For we will not allow him to steal our freedoms.

And we will not allow him to steal our future...

People should save for their own retirement... unless you are a Con MP and so warrant a nice fat pension at 55, for being nothing but a lickspittle sycophantic tumour on the body of Canada.

Everyone else needs to work 12 years more and don't deserve a damned thing. And if they work longer than age 71, they're too old to qualify for a pension!

more people will want improvements to C.P.P. because more and more people don't have employers with a pension plan. given the cost of living people simply can't save. More and more people are working in p/t, low wage jobs. they know when they retire they won't have an income. with an ever increasing number of seniors filing for bankruptcy in Canada, voters will see the hand writing on the wall and it DOES NOT SAY vote Steve and poverty

It isn't just young people who are in precarious work. A lot of people between 50 and 65, er... make that 67, are in very straitened circumstances these days. I'm not rich enough to file for bankruptcy. I don't owe a lot because I don't buy anything on credit, but I own nothing either except my computer and stacks of worthless books.

No shame, obviously, when MPs can clam copious pensions.

He stole that from the rest of us the man has never worked and yet he is among the Canadian rich, he is a thief.