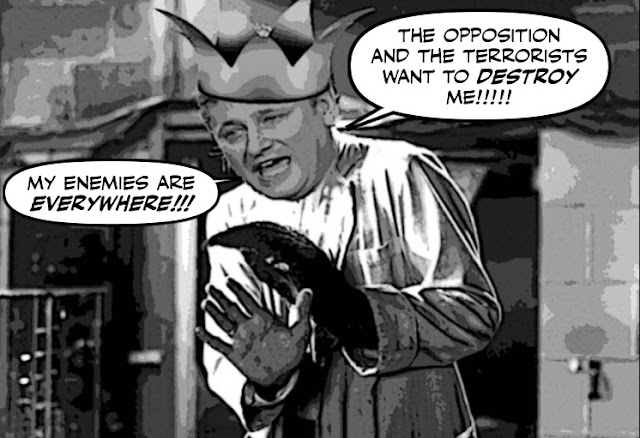 In one of my last posts I wrote about how Stephen Harper is now so desperate he is looking crazier every day.

Morphing into a monster who can no longer be restrained by the rule of law.

And yesterday when he flew into Toronto to personally deliver a cheque for a commuter train project, those fears were only reinforced... 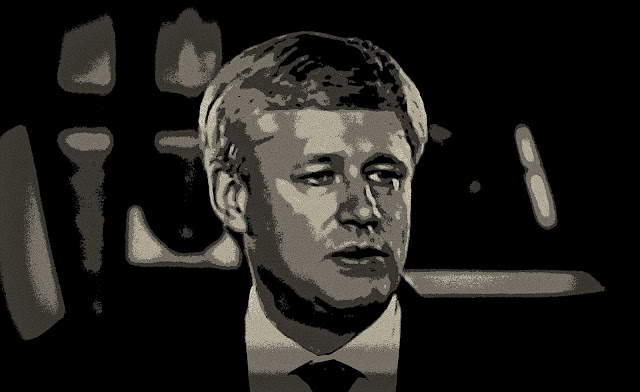 For although he was plastered with make-up, there was new look in his cold dead eyes.

And it was pretty clear that something had changed, and that his transformation is now complete. 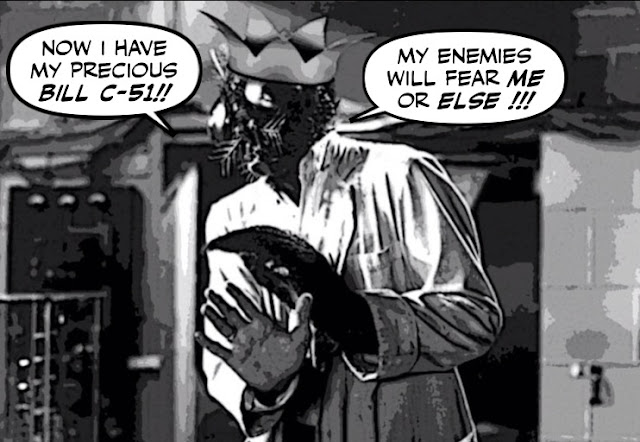 For now he has his precious police state.

Bill C-51 has been given royal assent and is now the law of the land.

And as Michael Harris writes, Harper is trying to remake Canada in his paranoid image.

After ten years of governing by stealth and lies, Stephen Harper has finally laid his vision for Canada on the line. It’s Bill C-51. This is Harper’s “War is Peace” moment. If anything can bring his decade of division, deception and deconstruction to a merciful end, it will be this piece of democracy-killing legislation.

For that dangerously flawed bill could only have been dreamed up by a leader like him.

C-51 is the transparent and triumphant work of someone who likes martial authority, likes being photographed around people in uniform, likes dishing out punishment to anyone who crosses him, and wants to turn Canada into a giant yard-sale for the oligarchs who run things.

Or a power hungry maniac, so desperate to hang on to that power, he is now willing to openly flout the rule of law... 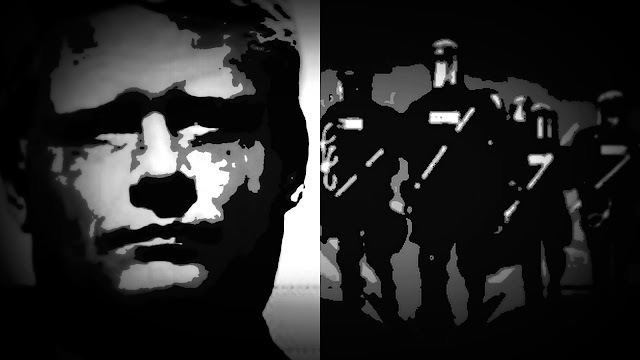 There’s something new here. The police state usually pads up behind you on cat’s paws. But this time, Harper has stabbed his finger into everyone’s chest to give us a hearty shove. This is a blatant, brazen grab for the kind of power no leader in a democracy should seek — let alone have in perpetuity.

Or do or say ANYTHING.

For if you doubt that, check out this exchange with Tom Mulcair, and how Harper answers any question about the criminal activities of his rotting regime...

And then ask yourself, how could ANYONE trust a deranged demagogue like that one with new powers like these?

In a democracy, we can use our right to protest against anything we stand against. But not anymore.

This bill will affect anyone who “undermines the sovereignty, security or territorial integrity of Canada or the lives or the security of the people of Canada,” including union members, environmentalists, Aboriginal rights activists or basically anyone who stands in the way of national security.

According to Canadian Journalists for Free Expression, “any protests and strikes that lack the proper permits would be fair game… [and] that could include not securing the appropriate noise by-law exemption for loud megaphone use after 7 p.m.”

Or ask yourself this question:

How did a piece of legislation that has raised the ire of four prime ministers, five former Supreme Court justices, First Nations Chiefs, the 36,000 lawyers of the Canadian Bar Association, 51,000 members of the Postal Union and even former CSIS agents ever make it out of the Department of Justice, let alone through the House of Commons?

And then I think you'll agree with Michael Harris:

This PM isn’t interested in the rule of law, but the rule of Steve. And that is what Bill C-51 is all about — and why this guy should be running North Korea, not Canada.

And I'm sure you know what we must do.

We must unite all decent Canadians to defeat the monstrous Stephen Harper and his depraved Con regime.

Before he really does change this country beyond recognition.

Before his madness leads us to absolute disaster, and destroys what's left of our Canada. 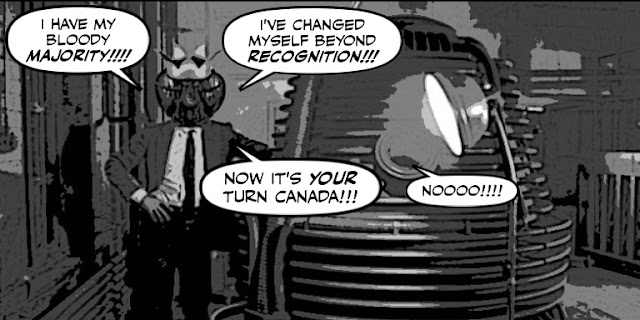 Everybody who gets little (or big) handouts from Harper has to remember that it is their money he is dishing out. And that he renegs on all his promises or makes it so that the money arrives sometime in 2020. There is always a catch.

The Conservatives have to worry when even the great Conservative/convict, Conrad Black, is publicly expressing his great unhappiness with them.

The Liberals, however, also have to worry as Conrad Black seems now to be professing his love for them.

And the NDP too should start to worry because it seems Conrad Black may be warming up to them if his affair with the Liberals fail to work out.

But the good news is, when even Conrad Black is unhappy with Harper, he is toast. Unless he cheats again of course .... and the question is will he be able to get away with electoral fraud again as he had done in all three elections: 2006: In and Out; 2008: Dean Del Mastro, 2011: robocalls ?

It took a while but people are finally learning how undemocratic this bill is and it will lead to Harper's undoing, along with the other hundreds of reasons to vote him out this fall. We will not allow Harper to turn this great country into a banana republic run by a maniacal dictator.
JD

CSIS: “C-51 will help us defeat the enemies we plan to invent”
http://www.thebeaverton.com/national/item/1909-csis-c-51-will-help-us-defeat-the-enemies-we-plan-to-invent

I for one can hardly wait until Stevie starts having his friend Paulson order the RCMP to start rounding up and arresting Canadians, even if it is me or mine. Then Canadians will truly see how dangerous Steve really is. Now Stevie most likely won't have anyone arrested between now and election day, but after wards, ya, just wait.

of course he may not be returned to office. James Moore said he wasn't running. No great loss. He's the cabinet minister from B.C. who said it wasn't his responsibility to feed his neighbour's hungry kids. Steve could still call off the election and wait a year. he could do it. no problem just call Parliament back and I'm sure his stewgie G.G. would accommodate him.

Even right wingers see Bill C-51 as a threat to a democratic society. But Steve will rock on, until the final minute. We can only hope it happens sooner than later.

hi anon....yes, after having blown the surplus, most of the funding promises the Cons are making now are drawn from thin air, and are not worth the paper they are written. For example the commuter train funding promise that I mentioned in my post, is now being closely examined and is looking nothing less than fraudulent. For one thing it would blow their infrastructure budget on just one project. And the funds the,selves are supposed to be spent over 20 to 30 years. If anybody else tried it they would be sent to prison...

hi anon...yes I see Lord Hot Cross Buns has abandoned the Cons over of all things his penal policies. Who says prison isn't good for some people? But it's his libertarian wing he has to worry about the most. Because many of them are outraged by Bill C-51 and that could really cost him...

hi JD...I think you're right. Polls have clearly shown that the more people find out what's in the bill the more they loathe it. And we still have a lot of time to educate others and drive that message home. The fact is despite his best efforts, and all that tax payers money he has been unable to grow his support beyond about 30 percent. And that's a long way from the majority he needs to remain in office....

hi David...yes I ran that manifesto from Voices a few days ago, and I must say I was impressed. There are now a lot of groups out there working to dethrone our would be king, and its very encouraging...

hi David....yes, it's too bad Rick Mercer is off right now because he'd be having a field day. But he'll be back just in time for the election so I'm sure he'll make up for it then....

hi e.a.f...yes Harpo has no choice now but to hang in to the bitter end. He should have resigned months ago, but the "terrorist" incident gave him a new lease on life and inflamed his ambitions. The problem is those kind of things never last, and now he's back to dealing with cruel reality....