Jason Kenney and the Not So Great Con War on Russia 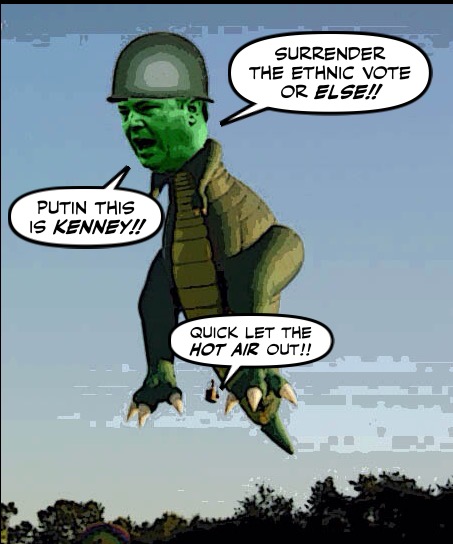 As you know, the thought that Jason Kenney is our Defence Minister, sometimes keeps me awake at night. Or makes me wake up screaming.

Because I fear that absurd chicken hawk might use his big mouth, and appalling judgement, to make the dangerous situation in Ukraine even more dangerous.

And lead us cheerfully into the Third World War, or what religious fanatics like him call The Rapture.

So I'm glad to report that Kenney is now deflating his own balloon.

Hinting at how close Canada has come to providing lethal aid to Ukraine in its war against Russian-backed separatists, Defence Minister Jason Kenney said Thursday that he recently ordered a military inventory to determine what weapons Canada could send to the Ukrainian army, if it chose to do so. The answer that came back was: not much.

Although the thought that he was actually looking for weapons to send into that volatile conflict is hardly reassuring.

I actually had our military do an inventory of possible equipment, just to prepare for all eventualities. The conclusion is we just don’t have useful, operable equipment that we could send,” Mr. Kenney said.

And even though it was only in crass pursuit of the ethnic vote...

The inventory was also ordered around the same time the Ukrainian-Canadian Congress launched a large-scale lobbying effort, arguing the West’s reluctance to provide weapons to Ukraine “fuels Russia’s escalation.”

It does make me question his judgement, and his sanity. Again.

But then like his Great Leader Stephen Harper, he is desperate.

Because after blowing so much hot air out of his cannon mouth, and having raised the expectations of the Ukrainians so much, he must now let them down gently. 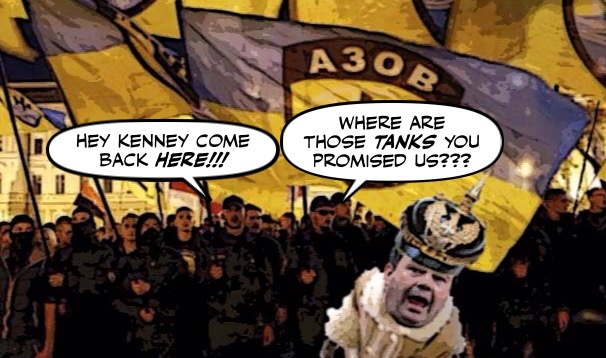 And could prove fatal for the Cons. Because no weapons, no ethnic vote.

Which would make it Kenney's most humiliating retreat since the foreign workers scandal blew up in his face... 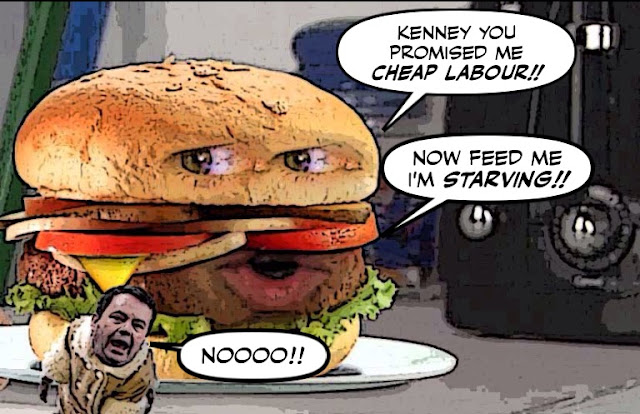 Still I see Kenney is off to meet with the Ukrainians. Again.

Mr. Kenney flies from Brussels to Kiev on Friday, where he will meet with both Ukrainian President Petro Poroshenko and Prime Minister Arseniy Yatsenyuk. While in Kiev, Mr. Kenney said he will announce a “bundle of relatively small projects” aimed at improving the country’s governance.

No doubt to give their military Stephen Harper's new marching orders, and spread some election goodies around, like the Cons are doing in Canada.

And I'm sure he'll take SOMETHING to help them keep the Russian bear at bay.

And we're not selling THEM to the Saudis.

The Canadian government carefully courted Saudi Arabia in the years leading up to an unprecedented $15-billion arms sale to Riyadh brokered by Ottawa that remains shrouded in secrecy, documents show.

Those champions of human rights and democracy.

And of course if the cat doesn't work, I'm sure Kenney can privately assure the Ukrainians, that as soon as he can find enough bows and arrows.

More help will be forthcoming...

Jason Kenney, the mouth that roared.

When can we give peace and sanity a chance?

And fire him and his Great Leader. 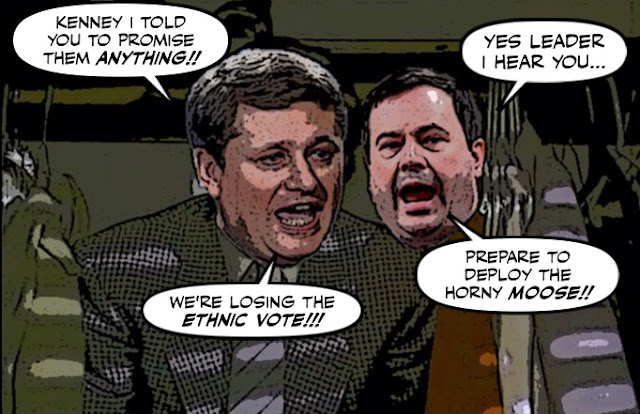 Kenney must be overjoyed now that Moore is gone, and probably sees himself as Harpy's successor.

Surely Canada can find some kind of weapons to send to the Ukraine. Rumour has it that Laureen and an RCMP bodyguard have been secretly training a crack cat commando squad in a suite at the Chateau Laurier hotel. Canada could always deploy them to the Ukraine. Unfortunately, it seems that Laureen has become so attached to them that she can't bear to part.

But there's always those leftover muskets from the war of 1812 celebrations. And maybe a snowmobile.

So ? Send her along with the cats.

I meant to allude to the reformatory statagists plan to unleash their secret weapon Lureen.

Like I said before, Canada has about the same number of Ukrainian Canadians as First Nations-- about 1.2 million each.

But First Nations peoples are not on Harpo's radar because most don't vote.

Perhaps Kenney ought to remember Canada doesn't have much in the way of military equipment. They haven't provided funds for that. Kenney ought to remember one of the navy ships gets its parts from craigslist. Kenny ought to remember only one in 12 RCMP officers have carbines and training on them. So Jason, have a reality check. This isn't the U.S.A. which has lots of armaments or Russia who has lots of them. This is the Canada you created, where the gangsters out power the cops. Our armed forces aren't any different. If we had to suddenly find a lot of weapons to fight off an invasion and the U.S.A. wouldn't help, Jason would have to check with is local Hell's Angels chapter to find the fire power he needs or some of their friends.

Jason and Steve keep blowing their pie holes. They need to come back home and figure out who keeps killing all the First Nations women and why there is a boil water advisory in some reserves which have gone on for 18 yrs. Like Jason, charity begins at home and I'm sure there are a few reserves who would like clean drinking water. cut the war talk and come home now and do the job Canadians are paying you to do. No one in Europe pays any attention to you and Steve. The two of you are most likely considered the two bat shit crazies from Canada. At the rate these 2 are going they make Gilles Douceppe and the Bloc look like committed Canadians. At least they stay home and look after Canadian business, as they see it.

Kenney ia a complete buffoon. I cringe every time he gets near a microphone or twiiter.

hi anon....yes I'm sure Kenney's happy to see Moore go, but he can't be too happy because a lot of social conservatives are leaving the Con regime, so his hold on it has been weakened. But yes, if Harper is defeated it's going to get ugly...

hi anon....you're right, something has to be done with all that military equipment left over from the War of 1812. And a snowmobile would be good too, especially one of those stealth ones that we were apparently developing a few years ago. Until somebody figured out that although they were invisible you could hear them coming about ten miles away. But of course if they REALLY wanted to win the war they could drop Kenney on them. And just the sight of that would make the Russians surrender immediately... ;)

hi anon...thank you for pointing that out. I talk about the ethnic vote, but I know some Ukrainian-Canadians too and like me they think Harper is a maniac. Of course, when he starts going after the Scottish-Canadian vote, I'll also have a chance to prove that you can't buy Canadians that easily... ;)

hi rumleyfips...send Laureen AND her cats? I think that would be contrary to the Geneva Convention...

hi David...somebody recently told me about a group that is trying to register as many First Nations people as possible. That would be great, and I have wished them luck. What a great way to get back at the Cons for the shabby way they have treated them...

hi e.a.f....please don't publicize the state of armed forces after ten years of Con rule. Or the Dutchy of Grand Fenwick will invade and defeat US !!! But yes the Cons are all talk and no action, thank goodness.
And I can't wait for the day those blowhards are finally silenced, and we can act like Canadians again...

hi Pamela...yes he is an absolute buffoon. And like Vic Toews he can be a maniac on Twitter. But the good news is that he has made so many mistakes recently his stature has been greatly diminished. And if he still dreams of becoming Prime Minister he is dreaming in technicolour as we say in Quebec...

Google: Rally the First Nations Vote. Lots of web articles but I couldn't find one central website or Facebook page by that name.