Why the Cons Won't Be Charged For Their Terrorist Attack Ad

If you've seen this latest Con attack ad aimed at Justin Trudeau, you know how monstrous it is.

How it starts with the sinister ISIS anthem, and crudely and cruelly exploits the faces of men about to be savagely killed. You know why it's been called a snuff film.

And why Stephen Harper should be charged under the provisions of his own ghastly Bill C-51, for spreading terrorist propaganda.

But sadly it seems Harper and his ghastly gang will NOT be charged.

For at least one very good reason.

While Conservatives may have inadvertently violated the propaganda provisions in their own controversial anti-terror legislation, Bill C-51, by posting ISIS photos and playing the group’s anthem to the backdrop of an election-style ad blasting Justin Trudeau, they’re probably safe from defending it in court.

Legally, the Conservatives might have an airtight defence: themselves. A few paragraphs below the new laws criminalizing the advocating, promoting or commissioning of terrorism content is a piece on consent: “No proceeding under this section shall be instituted without the Attorney General’s consent.”

Can you believe it? The hapless stooge Peter Mackay... 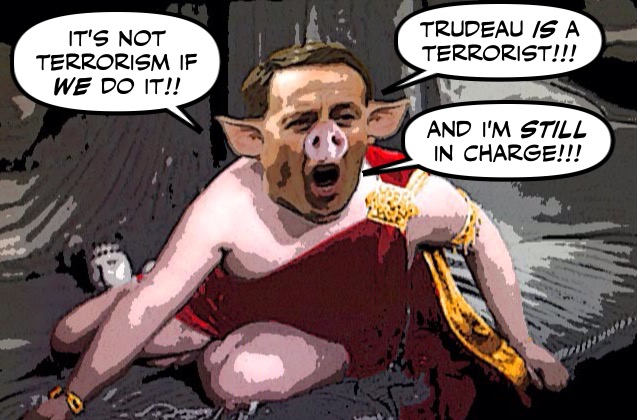 Just when we thought we were safe, he comes crawling back again.

But then it doesn't really matter whether the Cons are charged or not, because by not doing so they are only undermining their own anti-terrorist law.

In politics these days it's perception that counts.

And when even the National Post thinks the ad is revolting, you know the Cons are in big trouble.

What makes this ad so utterly revolting is imagining what those men might have been thinking as they were lowered into that pool. More to that point: imagine, just as a thought experiment, what they might have thought had they known footage of their deaths would be soon be used as campaign material by people they had never heard of, in a place they could only dream of. What would they have said if someone told them, as they drowned, that their executions would be used to help win an election?

This can be said succinctly: videos of people being murdered should not be used as campaign fodder — not people being executed by ISIL, not civilians being blown up during the 2013 Boston Marathon bombing, not a plane flying into the World Trade Center in 2001. It is morally vacant, utterly revolting and also, not all that politically savvy.

And to make matters even worse, it seems that even some of their own supporters feel the same way.

I love the conservatives, but this bashing needs to end. Does not look good from any party. Instead of the conservatives always telling us what Trudeau is doing, why don't they tell us what they are going to be doing/have done.

So an ad that was intended to damage Justin Trudeau, and will no doubt be repurposed to use against Tom Mulcair, has ended up damaging Stephen Harper.

By making him look even more disgusting... 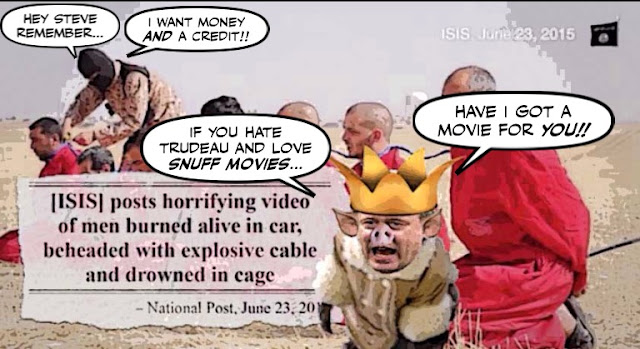 And reminding Canadians why so many want to get rid of him so badly.

You know I've said it before many times, and for many years, but I'll say it again now.

Stephen Harper's morally depraved nature, his utter lack of human decency, his psychopathic inability to feel the pain of others, are the demons that helped create him.

But at a time when so many Canadians are desperate for change, or the promise of something better, the last thing he needs is to have that attack ad reveal those demons.

And remind them of his monstrosity.

So his own demons will drag him down further.

And they will help consume him... 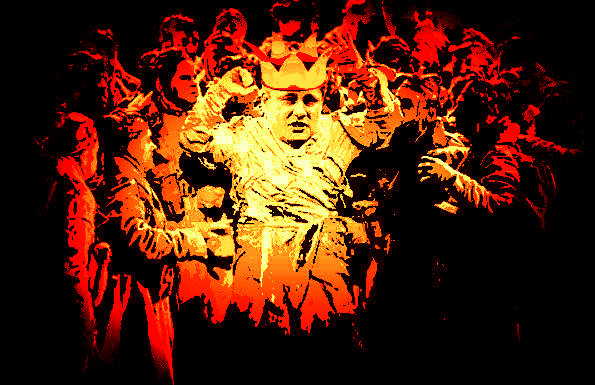 I wonder if this is the equivalent of the Chretien ad that did so much damage? I sincerely hope so.

I think the wheels are really coming off the Con campaign, first these ads and the fact that the Gov't apparently had decided to stretch postpone) a review of services for exiting Canadian Armed Forces members and recent veterans to 2017.

This has to be madness. From what I hear the military are not all that happy with since leaving Afghanistan and now this. Apparently there are 300,000 Canadian Legion members who may not be too impressed plus a lot of former military men and women too. I suspect that a lot of Legion members would have been Con supporters but after the Fantino fiascos and now this.

I think that not only Harper but most or all of senior Con party members and the Harper advisers are in an alternate reality. And I don't just mean the short pants in the PMO

The one burning question is, "where do they get these images"? I would be hard pressed to even search for them on the internet without fear of being watched let alone not having the desire to even view them. Can you imagine the sick depravity of the individual working in the propaganda office who seeks out these images and compiles them in their own video to serve any purpose?

Not a problem if you are working for the ruling party. Heck, the Prime Minister's Office is so deranged they may have just asked the Communications people in Ottawa for a couple of effective clips

Have the Cons really gone crazy? Bill C-377 just passed the Senate. Unless it has been very weasel wordedly rewritten it would seem to apply to anything from Unifor to the Law Society of Upper Canada and the Canadian Medical Society from what I was hearing earlier

Depraved indeed. This ad will come back to haunt Harper big time. He is one sick individual to allow this garbage to be used to try and win votes and I believe most people will feel the same.
JD

Harper first got elected in 2006 on the idea that he and his Cons would "clean up" Ottawa, bringing renewed democracy, transparency, and financial accountability. He was characterized by his supporters as being a decent, moral, Bible-believing leader for our time.

When Kory Teneycke was asked if there would be more Cons ads using ISIS footage, he said something like: "Wait and see".

Even hockey players oppose Bill C-377. I wonder what Harper's pal Wayne Gretzky think of it?

That is absolutely disgusting. I refuse to even look at ISIS footage of their tortures and murders, or the more high-tech ones perpetrated by Western powers.

hi jrkrideau...I hope this ad does them a lot of damage, to me it seems like an act of desperation. But maybe the juxtaposition of those images, and out of context quotes from Trudeau, will sway some people in this country. I hope not. I choose to believe that most Canadians are better than that, and that come October the Cons will be made to pay for what they have done....

hi zoombats...that's a good question. I've never tried looking for an ISIS video because their degenerate brutality sickens me, and I'd rather not have CSIS come after me. ;)
But yeah it is quite an image, the Cons in their bunker, watching terrorist videos....

hi David...yes I saw that, and I must say Kory never looked more sinister. Another few months in the PMO and he's going to look like Dracula...

hi JD....yes I think this ad is the essence of Harper. Not a thought for those doomed men who he would use like props as he uses others all the time. He couldn't be a worse Prime Minister and human being, and we can't get rid of him soon enough...

hi hinofan...well I see the Wild Rose party is back to being the Wild Hog party, that was quick. I'm glad to see that Notley is still popular though, so hopefully their squealing won't go anywhere...

hi lagatta...yes it is disgusting stuff. I felt bad myself making a photoshop out of one of those pictures, but it was the only way I could think of to express my contempt, and try to make it absolutely clear what they are doing. As for that ISIS banner...I read the story, I can't believe that CNN was so clueless. And there's an article in the Guardian where the guy who made the banner writes about how he was just trying to make a statement, and is not amused that some found it funny...