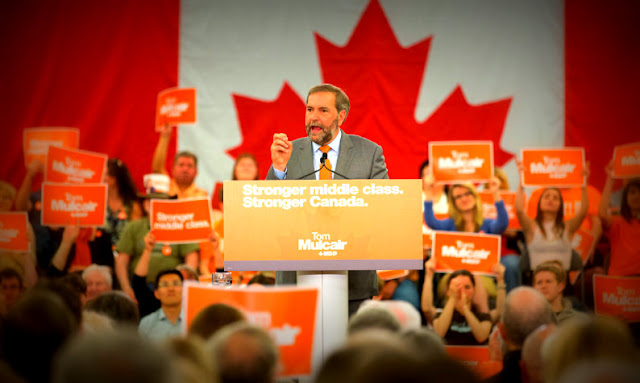 As I've been saying for quite a while the winds of change are sweeping across this country, and the latest EKOS poll only confirms that.

It's lead over the other parties continues to grow.

And if an election was held tomorrow it would likely be in a position to form a minority government. 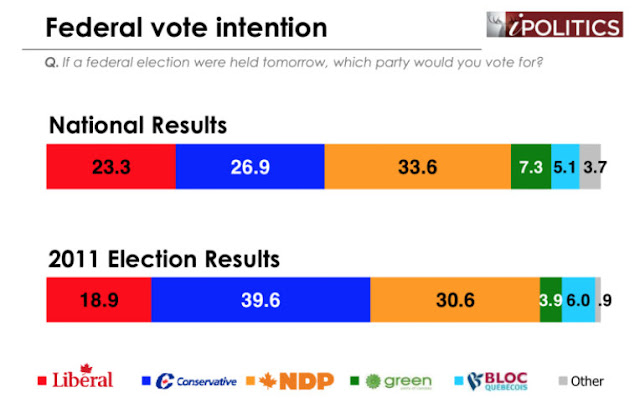 In five of our last six polls, the NDP improved its standing with Canadian voters and the party now stands at 33.6 per cent — a 16-point gain in just four months. The New Democrats now have nearly double the support they had at this point prior to the 2011 election. Support for the Conservatives and the Liberals continues to languish, with the two parties standing at 27 points and 23 points respectively.

And since the NDP is still climbing, it can now dream of even bigger things... 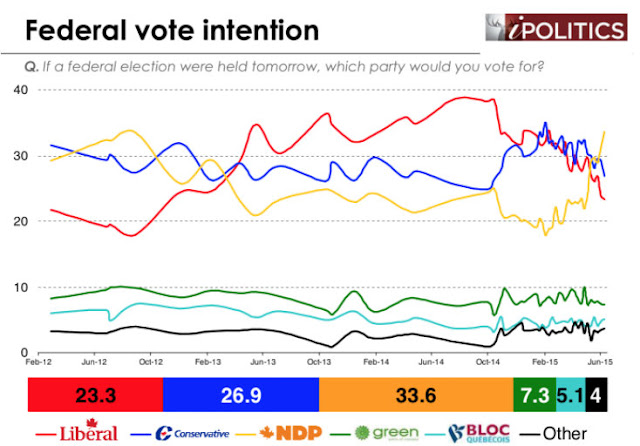 As Frank Graves points out there are some caveats.

For NDP Leader Tom Mulcair, the most troubling aspect of his party’s robust poll numbers is how they tilt towards younger voters. One-third of the party’s constituency is under the age of 35. These voters typically don’t vote in great numbers and they are a politically fluid group, with a tendency to bounce between parties.

But I'm sure that young voters will turn out in numbers never seen before.

And the best news is that Stephen Harper's Cons are falling like a stone...or a meteorite. 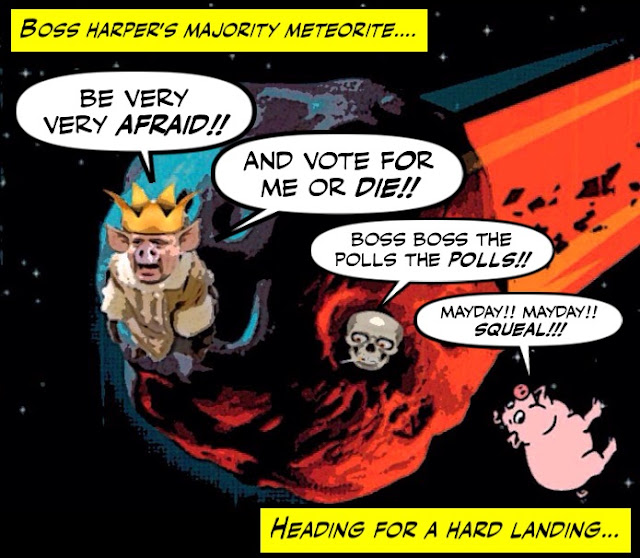 And it seems that their foul anti terrorist Bill C-51 may be helping to drag them down. 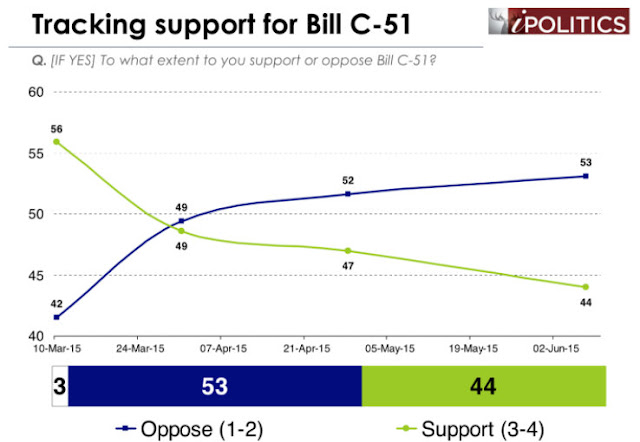 The charts above show that support for C-51 has declined sharply and there is now clear majority opposition — a far cry from the majority support of a couple of months back (the period which coincides with the Liberals and NDP changing places in the polls). It’s also worth noting that the percentage of ‘strong’ opposition is twice as high as strong support — which suggests that the growing opposition is engaging emotionally.

Which shouldn't be that surprising.

For as the Fear Factor fades, and as other polls show that the more Canadians learn what is in Bill C-51 the more they loathe it, resistance to the bill can only grow.... 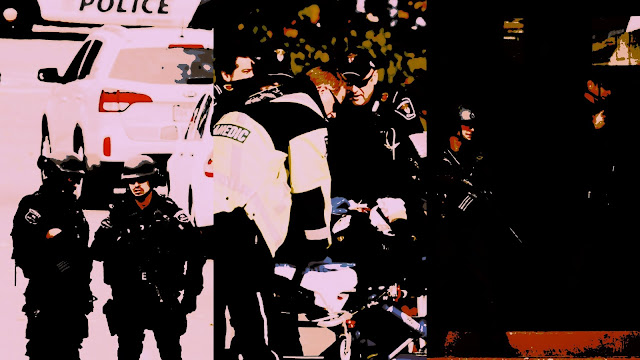 These findings echo the trends noted in an essay we released in the wake of the Parliament Hill shootings, when we cautioned that while Canadians are often initially supportive of measures meant to protect civlians at home, such support quickly tapers off.

Virtually every response to the terrorist threat over the past decade has been deemed a failure in hindsight. The public flatly rejects the notion that threats to our security can be resolved through further restrictions on personal freedoms — and they’ll hold their leaders to account for any decisions which further erode civil liberties.

The NDP may also be benefiting from its position that the Senate should be abolished. Because even though many experts believe that would be almost impossible, it does reflect the views of most Canadians.

And Stephen Harper stands to lose the most... 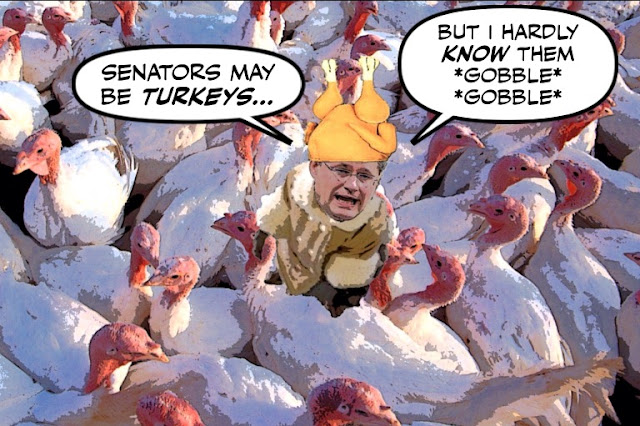 But beyond the individual issues I think what is mostly responsible for fuelling the NDP's rise is that desire for change. And the clear desire of many progressive voters to support the party that can best defeat the Cons.

And if the NDP continues to climb in the polls, and if the Liberals continue to decline, I'm pretty sure more progressives will join them, and what is now just a surge could very well become an orange wave. 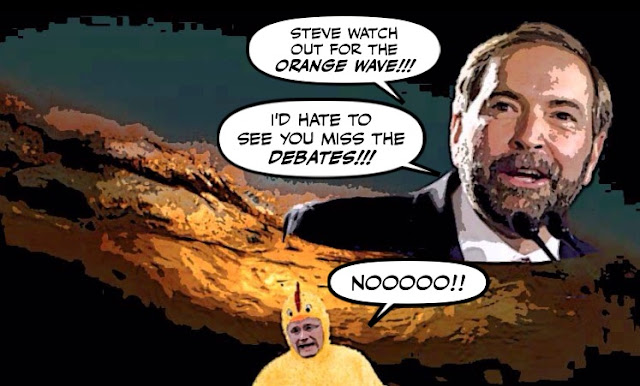 Especially if Tom Mulcair does well in the leadership debates as most Canadians believe he will.

As they say, only time will tell. But that time is running out for the Cons.

And for someone like me who dreams only of toppling that foul regime by whatever democratic means necessary, it couldn't be better news.

I've been waiting so long for that dream to come true, or for our ship to come in.

And now I finally think it is... 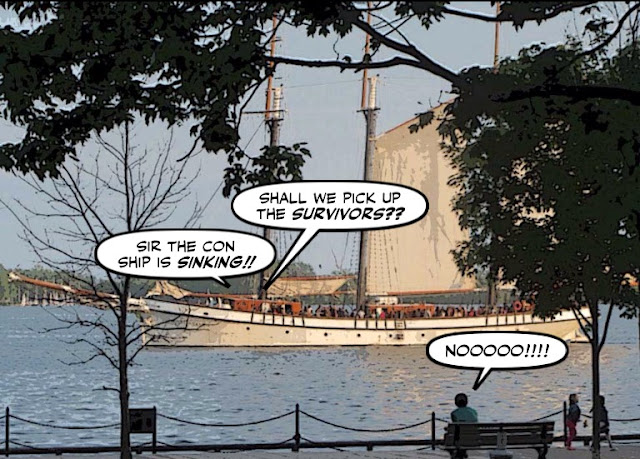 Now isn't that great news to end another week in Harperland?

Hey tyrant, watch out for that orange wave !!!

Simon, I know you must have watched Mulcair at work on more than one occasion..he eviscerates the other parties, there is no contest..and the only other person who can back Harper and his residual scum up against the wall is the redoubtable Elizabeth May..what a pair those two would be as debating p[artners!
As for Harper,unless he can control the questions and has a great backdoor team feeding him answers, he's in big trouble..debates? I don't care who holds them or when..he won't show up, literally and figuratively. Stick a fork in him, Harper is done!

Was this before or after the great Gilles Duceppe comeback?

I never thought I'd agree with rightwing Mario Dumont about anything, but I think he had a point about "addiction to politics". I know Gilles Duceppe slightly (from the union movement) and while I'd never voted Bloc, he made some very good interventions, including some for neglected First Nations people on the Ottawa/Outaouais River (the REAL pronunciation is somewhere between the French and English mishearings). I think people here are much more interested in getting rid of Harper.

Before we all get our knickers in too big a twist......... it will still take voting for the candidate most likely to defeat the Conservative, in each and every riding, to defeat the Dear Leader.

I have heard that strategic voting is out and that we should vote for the candidate of our choice. It makes sense to me. If you look at Alberta, it's obvious they did not vote strategically and they got rid of the Cons.

I live in B.C. and saw what the polls said and saw the election results, Dix lost by a landslide. Of course he brought in "easterners" to run the campaign, Notely brought in B.C.er Gerry Scott and won.

I personally do not talk about an win for the NDP OR Liberals yet. it isn't over until the fat lady sings and the aria hasn't begun.

I like the idea of Gilles Duceppe running in this election. He brings a new dynamic to the debates and it will be fun to watch. things could be worse than he and Elizabeth May hold the balance of power or deciding who get to be prime minster because I do know one thing, neither of them will support Harper.

The NDP was the only non con party that was organized. That helped them. There was for sure strategic. Many Alberta Liberals and Alberta Party and even somne PC voters went NDP. I know because I live here. We wanted change and they were the strategy to do that.

hi mizdarlin...I'll believe the fork when I see it, but I do believe that the winds of change are blowing in our favour again. It's going to be very difficult for Harper to get anywhere near a majority, and of course if he falls short, he will be toppled before he knows what hit him....

hi lagatta...the polling ended the day before Duceppe made his announcement. But I don't think it will make any difference. I've always liked Duceppe myself and so do a lot of Quebecers. But that didn't stop them from defeating him and all those other BLOC MPs when they thought Jack Layton migt be able to topple the Cons. And I'm pretty sure the same thing will happen this time...

hi anon...I'm open to any way of defeating the Cons, and progressives shouldn't vote for a candidate that cannot win. I'm sure people are going to be very conscious of that when the time comes....

hi anon...well if you put it that way, I agree. Crushing them is better than just sweeping them away. Unless they're swept away into a pool of sharks... ;)

hi anon 12;28....strategic voting should definitely be another weapon in our arsenal. There are arguments for and against it. But if we can at least agree that we won't vote for a candidate who doesn't stand a chance of winning, we'll be ahead of the game. We'll have a chance to examine this question more closely well before the election. And what I can say is that it did work to an extent during the last provincial election in Ontario....

hi e.a.f... I agree we should not count our chickens before they are hatched. But the trend line for the NDP is impressive, and if it continues it will almost certainly cause a snowballing effect. As for Gilles Duceppe, although I like him I'm not happy to see him back. The Bloc could still siphon away some votes and cause an even greater split in the progressive vote. And remember if we have to topple his minority government Harper will use the separatist menace to try to demonize a coalition like he did last time....

I think with the Orange Crush sweeping Alberta all Con Clowns are shaking in their shoes. Most especially Harper-con-clown. All of Canada took note and could see sea-change and a breath of fresh air. I was pleased to see 'The Notley Crue' get in and clean out the crooked Cons...

yes, and it maybe the people of Alberta give Steve and Jason the heave also. Friends tell me Steve and Jason are not well liked these days in the Calgary area. Might be Steve's continual mouthing off about Muslims.