Stephen Harper and the Trouble With the PMO 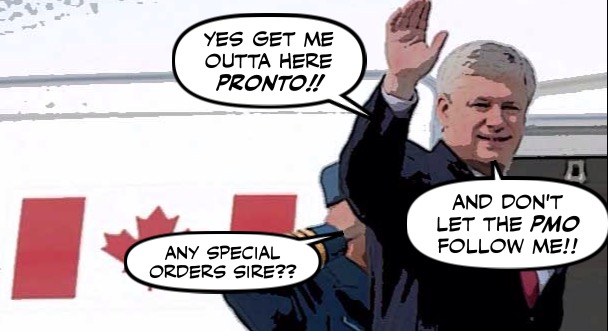 Well there he was waving happily as he set off for Ukraine to pander to the ethnic vote. Again.

And no doubt Stephen Harper WAS happy, because if that plane didn't have wings we'd have to call it a getaway car.

For at least now he won't be in Parliament next week to answer questions about the latest senate scandal.

Or the latest example of his appalling judgement.

One of the Conservative Party’s top spokesmen on law-and-order issues will face an RCMP investigation over his Senate travel claims related to his work on behalf of victims of crime, sources said.

Because that WOULD be embarrassing. I mean so much for his Great War on Crime.

Or so much for the Conservative brand.

What’s emerging on Harper’s watch is the seamy portrait of a panic-stricken, Tory-stuffed Senate whose leadership is implicated in the expense scandal, where the auditor has found widespread evidence of dodgy claims and where the rules have been rewritten to give anyone under a cloud every benefit of the doubt. We’ll get the full picture on Tuesday. But what we’ve seen already would make a vulture gag. This isn’t helping the Conservative brand.

Or as Chantal Hébert points out, so much for the young fanatics in the PMO whose political judgement must also be questioned.

In Harper’s centralized Conservative operation, admission to the partisan speaking circuit is controlled from the top. At what point does it stop being a coincidence that the Harper appointees whose names are brought to the attention of the RCMP happen to be some of the most prominent on the party’s speaking roster?

For what does all this sleaze say about them, and their depraved leader? 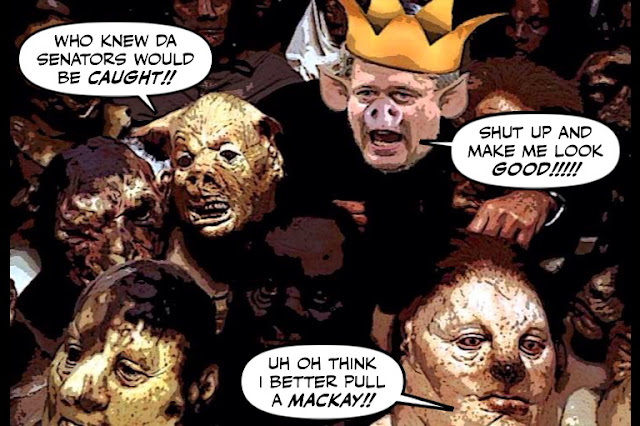 Since chief-of-staff Nigel Wright left the PMO over his dealings with Duffy, Harper has put the political management of the government in the hands of a core group of fierce loyalists. They in turn have tended to place their trust in like-minded partisans to man the Conservative front line in question period, at the negotiating table of the election debates . . . and in the Senate.

In most instances, they have made matters worse.

And if you want to know how incompetent they are, all you have to do is examine their latest attack ad aimed at Justin Trudeau, the so-called "hair" ad... 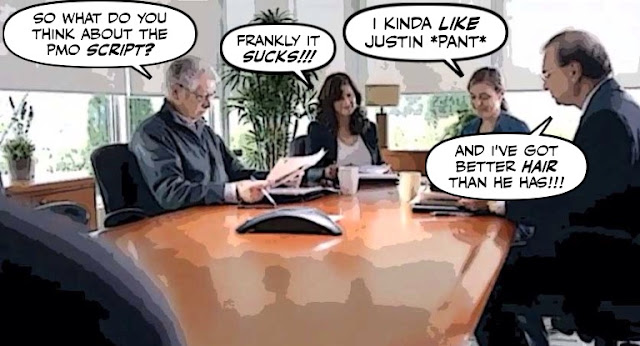 Which as it turns out was practically a carbon copy of an old NDP ad.

Was full of lies and distortions from beginning to end. May have helped the NDP more than it helped the Cons, as I pointed out in a post yesterday.

And to make matters worse, according to that latest Abacus poll, appears to have bombed.

We measured reactions to four different political advertisements (two CPC ads – here and here), one LPC and one NDP ad). In each case, we asked if the topic of the ad is important, if the audience agreed with the points being made, if the ad built support for the sponsor, and if the ad is fair or unfair.

Three of the four ads were considered fair by large majorities (80% plus) of those surveyed. Less than half (41%) considered the CPC Interview Trudeau Hair ad fair, while 59% felt it “crossed the line and was unfair."

The CPC Interview/Trudeau Hair ad had a negative 29 net score, with 36% saying it made them more inclined to support the Conservatives and 65% saying it had the opposite reaction.

And made this MUCH cheaper version of that ad, made by some Liberal supporters, look good by comparison...

And the best news? If this PMO is what we're up against in the next election we're laughing... 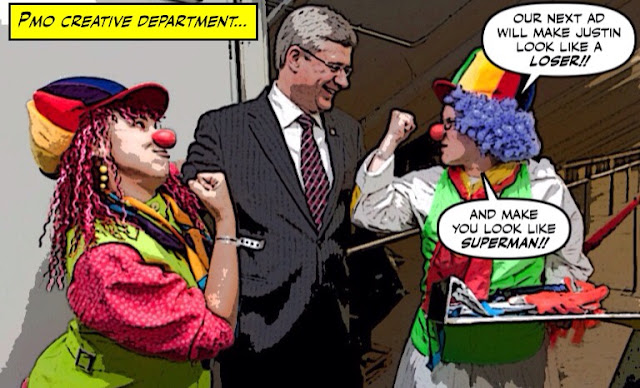 For what WOULD they have their Great Leader do next I wonder? 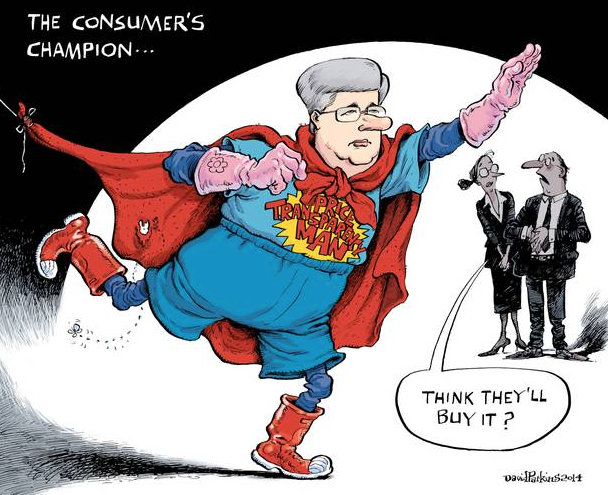 And yes, let's have a round of applause for them and their depraved master.

For they do so deserve it... 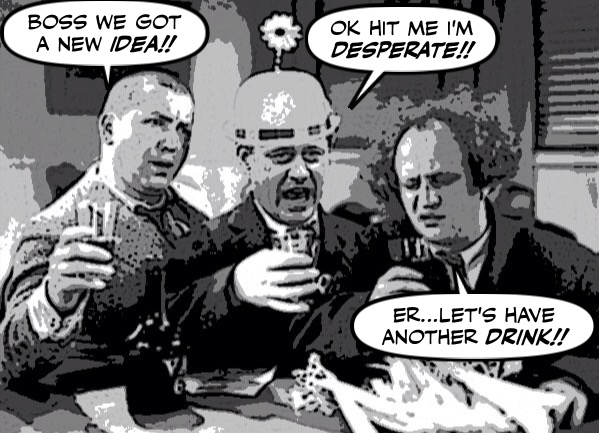 And they're all going down together.

Have great weekend everybody !!!!

Our warrior hero is off to do more harm than good in another troubled part of the world. Just can't rely on our European allies to try and broker a truce that might allow the Russian speaking part of eastern Ukraine to eventually reintegrate as one country. Wonder what he would do if the Inuit people decided the Con government has no respect for them and declared sovereignty over his precious oil reserves in the Artic. Wait we already know what he would do!! The Cons of this world never win, all they do is pull everyone down to their level.

Simon, Harper must know of the successful American engineered coup to unseat a democratically elected Ukrainian President and putting in place there man who is now the president. Harper must know of the American bases in eastern Europe that are a threat to Russian sovereignty and he must know about the US in using NATO as an arm of their foreign policy wanting to build more bases closer to the Russian border. So what's with the rhetoric? I don't think it is just for the Ukranian vote back home, although I think that is part of it. His rhetoric flies completely in the face of the facts and these are facts that he is fully aware of. Is he doing it to show that he is supporting the American agenda? For those who know the truth and it's there for anybody to see, Harpers bellowing about Putin sounds ridiculous. I cringe whenever he steps on the international stage.
We are not as he likes to say the envy of the world, we are ,under his leadership the brunt of many jokes I'm sure. I'm not sure though why all the rhetoric against Putin. Any thoughts?

My thought is that Russian phobia is the second bogyman in a three pronged scheme. The first one is fear of the religious terrorists that require us to give up freedom of speech ( hate speech is what they say it is ) and to allow spying on who ever they choose. Not everyone is religious so you need another bogyman to capture the other dissenters. Therefore; if you are against his oily vision and not a religious terrorist by definition you must be a Russian supported communist. It also fits that Russia is our Artic neighbor and as the ice caps melt due to global warming the oil rich resources become more accessible. In order to control and freely exploit these resources the Cons need an excuse to down play the significance of the Inuit and ramp up the military and eventual industrial presence in the Artic. The Russians are coming is a perfect excuse. It also helps that Harper would like to displace Russia as a major oil supplier to Europe perhaps this and the votes is his only reason.

The glue that keeps the bogymen working in sync is ethical corruption however once this genie was let out of the bottle it quickly morphed into greedy corruption. Admittedly the two bogyman theory as a form of manipulative control is abstract and gives Harper too much credit as a mastermind for most to take seriously but everyone understands greedy corruption and that hopefully will be his undoing.

The desperation is clearly showing as Rome slowly burns around them. In typical style, the coward flies off to "save" the Ukraine and vacuum whatever votes he can con out of Ukrainian Canadians, once again, all paid for by us saps, the Canadian taxpayer. I hope Ukrainian Canadians can see through Harper's pandering and conning for their votes and realize that they are merely a means to an end for a desperate dictator.
JD

Kathleen i read that at their last meeting they were pondering setting WWIII on us all the world or plunging it into a massive rescission and that they would later form a one-world government and currency and only they could save us. They make me wanna puke every Canadian Prime Minister since and including Trudeau Senior has been members and are at their beck and call. You think Harper engineered this destruction of Canada alone? No he was following orders. The Bildebergers find many uses in deranged men like him...

They are puppet masters and look upon us all with disdain and want eliminate the majority of us.

Hi Mogs.....I have been researching and following the Bilderberg 'Society" for a couple of years now and definitely believe they have a Big Agenda to destroy most of us.
Thanks for the link.......had never heard of the stones......but it all fits in with the proposed New World Order.
I mentioned here awhile back that Harper won't have to call an Election because WWIII will be started by then.......this will be the only way he can stay in power!

Try telling this to the ordinary person on the street and they will think you are crazy........

Ya Kathleen I have been trying to wake people up since the 1980's and they would look at me and yawn and ask can't you talk about something nice like how nice the weather is today? I would reply ya sure okay but it is not lasting much longer with the way we are going own it when it comes.

We are there now. I have been following the Bilderberg 'Society" for about thirty years and I know they are up to no good. Harper is a member: