Breaking: New Poll Suggests The NDP is Now Leading the Other Parties. 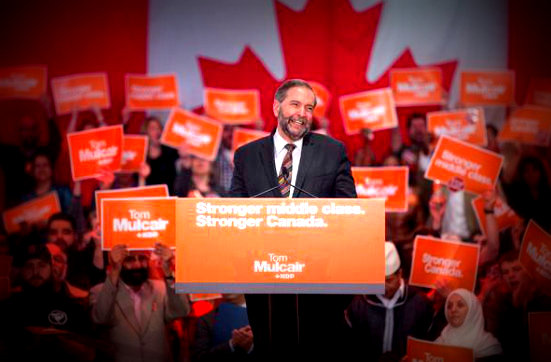 For weeks Tom Mulcair and the NDP have been climbing steadily in the polls, and it was clear that if that trend continued it was only a matter of time before they passed the other parties.

Well now they finally appear to have done it.

According to the latest EKOS poll they are now in first place. 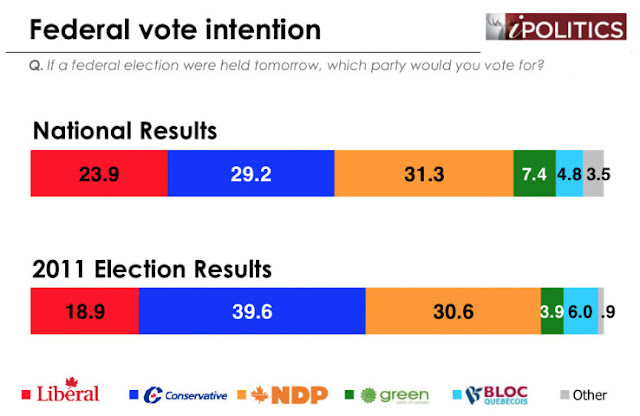 Just as it looked like we were setting into a three-way tie, the NDP appears to be opening up some daylight between itself and the Conservatives — who are still stuck at sub-30 — and the listless Liberals, still drifting downward in a significant erosion of their support.

And according to this poll and others, still climbing. 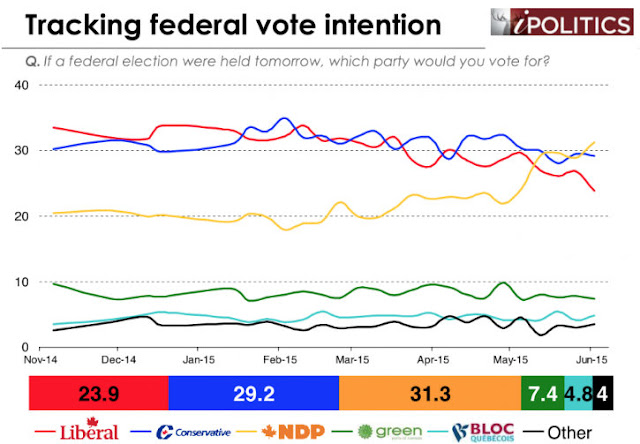 The Liberals continue to decline as the NDP continues to rise. The Conservatives are languishing well back of where they need to be for a reasonable shot at another stable government.

And while it's hard to say what exactly is responsible for the decline of the Liberals, and whether their support of Bill C-51 is hurting them as badly as many predicted it would.

But one has to think it has had an effect, and that together with Rachel Notley's victory in Alberta, and Tom Mulcair's strong performance, has made the NDP a legitimate option to replace the Cons.

Right across the country... 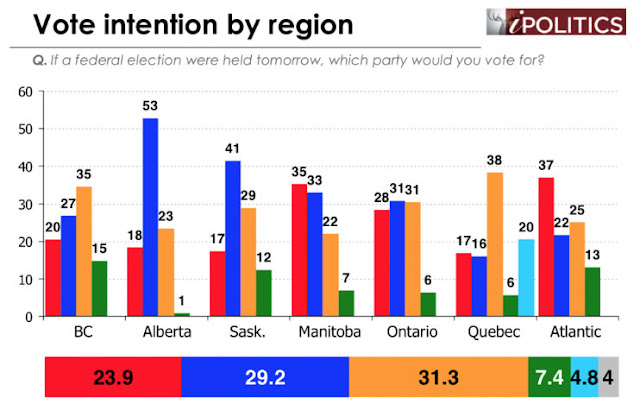 And nowhere more than in Quebec. 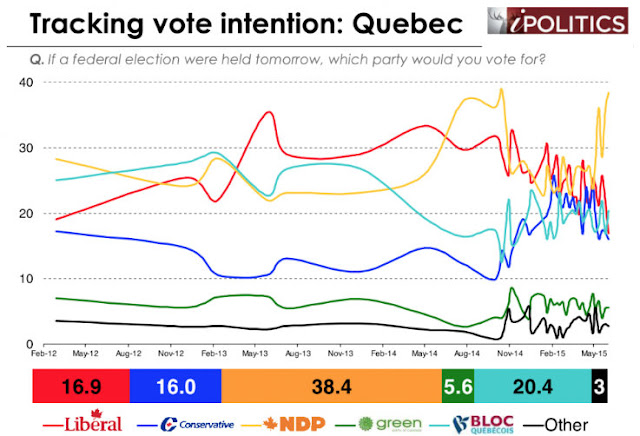 The NDP now holds a commanding lead in Quebec and enjoys double the support of any of the other three contenders. Liberal support has dropped considerably in Quebec; the party now finds itself in a three-way tie for second place.

Where just like they did last time when they thought Ignatieff's Liberals were fading, Quebecers are rushing to back the progressive party they think has the best chance of beating the Cons.

That surge could also grow if the Bloc numbers which seem a little high to me, and may have been influenced by the death of Jacques Parizeau the day before the polling ended, start bleeding away to the NDP as they did last time.

But of course the best news is that this is just the latest poll to suggest that Stephen Harper is in big trouble.

Not just because his popularity is tanking, but also because his whole campaign to date has been aimed at Justin Trudeau... 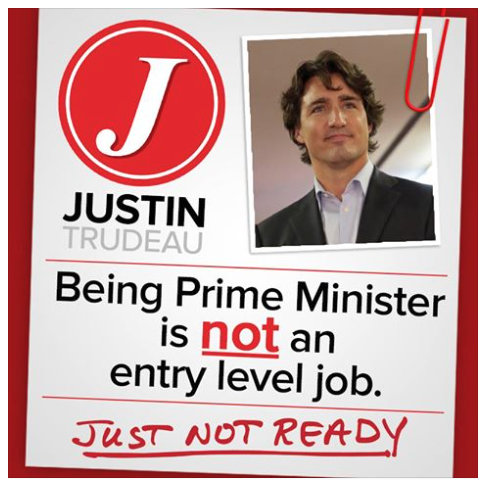 And this latest ad's claim that Justin is not ready right NOW, rather than boost Harper's numbers may actually be making it easier for some Liberal voters to switch to the NDP.

Who said Great Monkey Leader was a political genius eh?

As to what the future holds, it's too soon to say. But the latest Senate scandal will probably help the NDP since they have no senators, and believe the Senate should be abolished.

The political leader debates should help boost Mulcair since he is a very good debater.

And since there are now so many progressives who will do ANYTHING to defeat the Harper Cons, what's happening in Quebec could be replicated to some degree in other parts of the country, where more could join the NDP surge.

Just like they would have joined a Liberal surge if they had been ahead, and the NDP had been fading at this stage in the campaign.

Which explains why, as I said in my last post, Harper is looking so desperate. 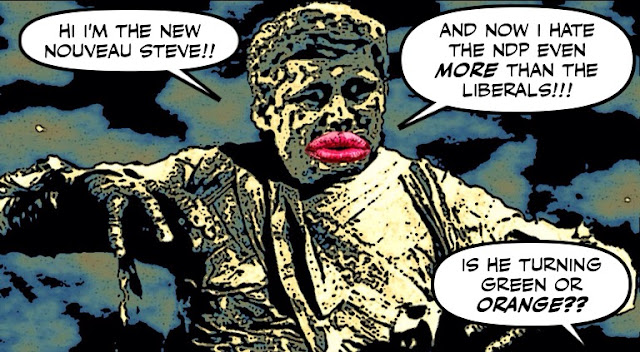 Because although it's hard to quantify, change does seem to be in the air. And it was always going to be Harper's biggest enemy.

He's been around too long, you can't put lipstick on a mummy, or a monster.

And with a little bit of luck, this long nightmare could soon be over...

That's great news and will only improve as time goes by and Harper's criminal group the CPC are further exposed. People are finally learning how corrupt they are when they read things like Duffy and the wife flying out to BC for a fundraiser that cost taxpayers 11 grand and raised 1,500 for the CPC. That's a great little scam there Harper but now the jig is up and you're going down.
JD

I can't say I'm surprised as the Con wheels seem to have have come off some time ago......arctic sovereignty issues, northern food mail program, ice breaker debacle, Nanisivik, Senate issues, juvenile attacks on Trudeau, top MP's getting out of Dodge, the "war" on terrorism....the list is endless......and then the whole Bill C-51 bulllshit. They've quite clearly shot themselves in the ass.....several times now.

I find it funny the CPC have essential spent millions of dollars, both public and party getting rid of the chief obstacle to Mulcair becoming Prime Minister and shot themselves in the foot as well.

And I saw this coming years ago.

Yes, the Con ads may in fact be sending support to the NDP. if people really don't want the Cons back in office and the public is buying the ads that Trudeau just isn't ready, (which I'm not buying--just isn't progressive enough) then they may decide that mulcair is more mature and will make a better leader for the country. This might do the Green some good also, because if they won't vote Con or NDP and Trudeau "just isn't ready" well Elizabeth May is older and they may simply decide to vote for the Greens.

hi JD....yes it is good to see that the NDP is doing well, especially since the Liberals seem to be fading and somebody has to stop the Harper Cons. As you know, at this point in Canadian history that's all I care about. And with about three-quarters of Canadians wanting change, with only a few months to go before an election, it couldn't be worst news for the Harper gang....

hi Way Way Up....yes they are acting like a very tired government, and Harper's hold on the party seems to be driving off all but the rigid ideologues, and that can only make things worse. I believe that change is good, and we've never needed it more than do now. Of course it's way to soon to declare victory. Harper is going to be delivering cheques into mailboxes all over Canada. And unless the NDP surge continues, he could still win a small majority. But that would only force the NDP and the Liberals to work together to topple him, so as you know that would make me happy too... ;)

hi Gyor...yes, it seems that Stephen Harper is so obsessed with Justin Trudeau he didn't see this coming. I believe he wanted the NDP to become strong enough to split the vote, but definitely not strong enough to form a government. Of course as I told Way Way Up, it's not a done deal. The Harper cult could still snatch a small minority government, so the NDP and the Liberals might still have to form a coalition government. Which would force ferocious NDP partisans like you and equally ferocious Liberal partisans to work together, which as you know would give me almost as much pleasure as seeing the Cons thrown into the dumper.

P.S. Tell Mulcair if he becomes PM I want to be our ambassador to Tahiti... ;)

hi e.a.f.... yes it's very interesting. The Cons have said they focus tested that Justin is not ready ad to the max. But as I pointed out in my post, saying that Justin might be ready some day, but not now, they may have inadvertently helped the NDP more than themselves....

"P.S. Tell Mulcair if he becomes PM I want to be our ambassador to Tahiti... ;)"

Sorry he cannot. It's part of France. Would you settle for Consul-General?

I had not thought about the ad having that effect but the way the polls are trending espeically the 65+ votes seem to support that . (Overheard in grocery store re Mulcair pre-Alberta election older (60s?) couple) "by far the best leader, pity he's the wong party" .

Given the ads and the NDP victory he may not be the wrong party any more.

yes! the orange wave keeps growing... however, we must remember what happened in BC in the last provincial election... when NDP was certain to win... and Christy won !
I suggest not to trust what the polls are saying and become complacent. More than ever, the stop-harper campaign is critical and we must keep asking everybody to VOTE ! mainly to the youth !