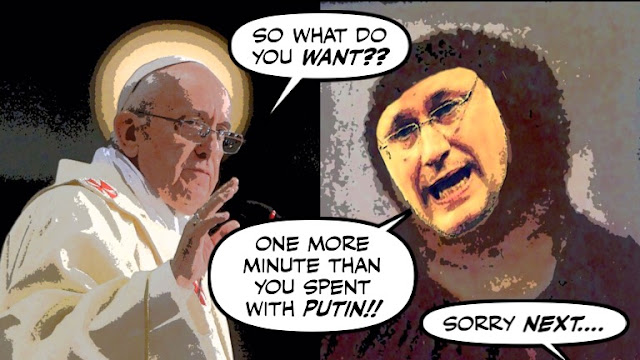 Well it seems that it was as I predicted yesterday. Pope Francis was indeed not too happy to see Stephen Harper.

And couldn't have made his feelings more obvious.

Harper’s 10-minute meeting with the Pope Francis was unusually short by Vatican standards. Russian President Vladimir Putin had a nearly 50-minute private audience with the pontiff a day earlier.

But then who came blame him eh? 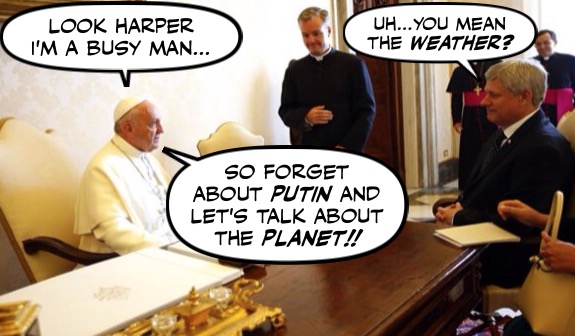 When the Pope is about to release an encyclical on the need to fight climate change, and Harper is the world's most infamous climate change denier.

And he brought Jason Kenney AND Julian Fantino with him.... 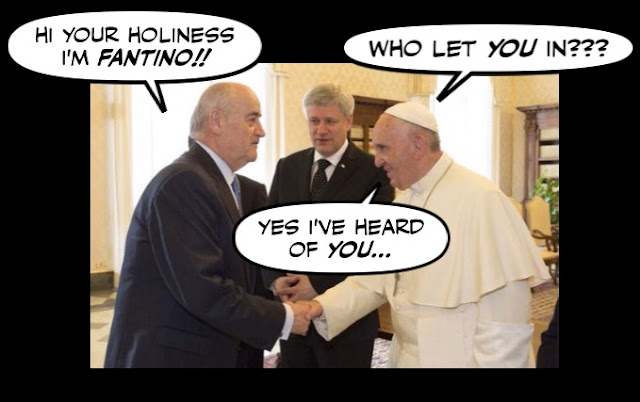 Which is enough to ruin any social occasion.

And then of course there's the fact that while the Pope is trying to get a ceasefire in Ukraine, Harper is determined to fan the flames of war.

And using that AND the Pope's visit for crass political purposes.... 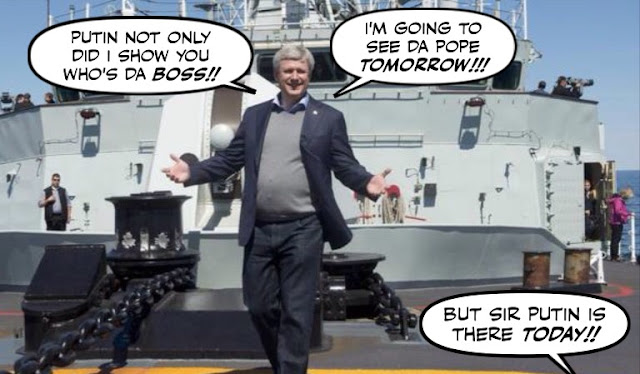 And while the PMO claimed that Harper raised the question of residential schools, the Vatican communique makes no mention of that, but does mention the environment.

At the conclusion of the conversation some questions of international politics were treated, with reference to Europe and the Middle East and the prospects of peace in that region, as well as the struggle against terrorism and questions related to the environment.

Which no doubt explains why Harper spent so little time with the Pope and so much time dodging the media.

Harper was visible to reporters only briefly on three occasions when short, frenetic photo ops took place. The prime minister did not speak nor did he take questions from Canadian media travelling with them on the final day of his travel.

And why the Pope was so obviously glad to see him depart... 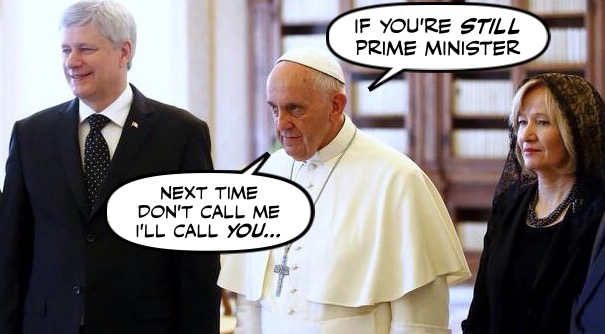 For he must know what most Canadians know.

The embarrassment is almost over.

And Stephen Harper's good to go...

I'm sure when the Pope looked into Harper's sunken dead eyes, he saw hell. The desperate Despot seeking salvation and a way out of eternal damnation. Too late for that now Stevie. Your sins have paved a road straight to hell and I can't wait to see you take that ride.
JD

Steve may think of himself as a "Christian" but he isn't, in my opinion. "Christians" don't do the things Steve does. At least Putin will go to confession from time to time.

I'm sure the Pope was wondering who the 3 idiots were and when told they weren't Curly, Larry and Moe but a P.M. and 2 cabinet ministers from Canada, I'm sure the Pope rushed off to say a few prayers for Canada.

The picture of Steve on the ship...Look closely. Is that his navel. Does he have an outie? (Or a belly button ring?)

Jeez! Look at the look on the pope's face. You'd think he had just seen something all disgusting and pudgy and hairy! Oh, wait . . . .

I think its a second penis

CBC reported that Putin was late and the Pope still spent an hour with him. Steve, however, showed up on time and yet His Holiness gave him just 10 mins. I think it kind of shows who the Pope preferred to spend his time with.

And the picture above would seem to confirm that ... the Pope hardly looked happy .... and it should not be difficult to look happy just for 10 mins.

Seems to me His Holiness must be thinking when Steve and his Mrs. would leave, eh?

The Pope did not even want to see Steve he was being polite but curt. Okay I've seen you you monster now get out.

I wonder who did all the talking in those 10 minutes Steve spent with Pope Francis ... LOLOL ... TY