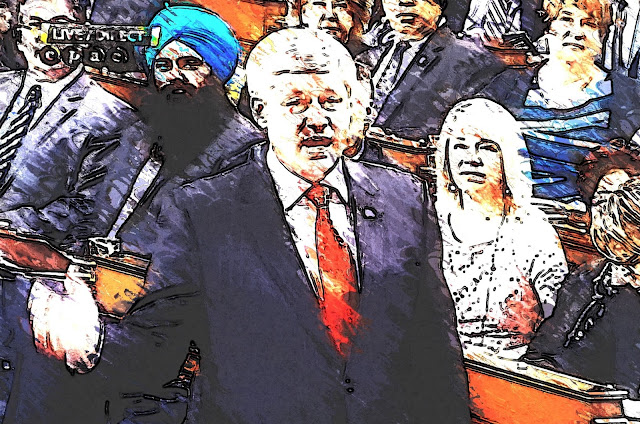 I grabbed this screen shot of Question Period yesterday with my new, shiny, but very cheap cell phone.

And as you can see it didn't come out that well eh?

But when I looked at it later, I thought it captured Stephen Harper's state of mind rather well.

For he is desperate, he is a mess, and it was yet another disastrous day of scandals, starting with this one.

A controversial Conservative senator has been expelled from his party’s caucus following allegations in a published report that he was having a sexual relationship with a 16-year-old girl. An official in the Prime Minister’s Office says Sen. Don Meredith is no longer a member of the Tory caucus.

Another scandal that can only remind Canadians once again of Harper's appalling judgement.

Meredith is the fourth Conservative senator to leave the party’s caucus in the last 18 months as the upper chamber continues to deal Harper a splitting political headache.

Make them wonder how many favours DOES he owe his rabid religious base?

And whether ANYONE can become a Con senator?

Meredith also landed in hot water for referring to himself as “Dr. Don Meredith” in press releases, despite the fact his doctorate came from a institution that didn’t have degree-granting abilities.

But then, and still on the Senate scandal front, came an even more devastating blow.

A report that his old buddy Nigel Wright will get to testify at the Duffy trial BEFORE rather than AFTER the election as Harper had been hoping. 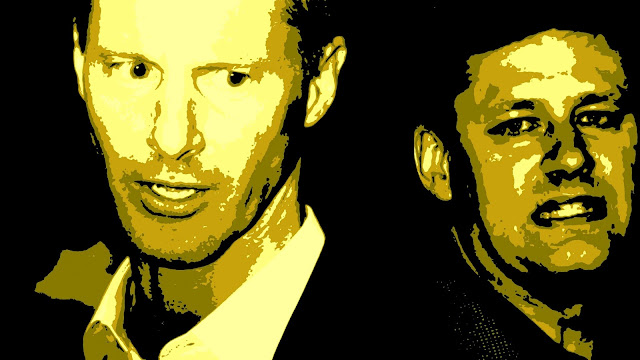 Nigel Wright is expected to testify at the Mike Duffy trial when it resumes the second week in August, Global News has learned. A source close to the case says Wright, who now lives in London, is expected to be called as the first new witness in August and could be on the stand for up to a week.

Which can only remind Canadians, just a few weeks before that election is called, of the corruption of the Harper regime.

And make them wonder once again whether Harper was telling the truth when he claimed he knew NOTHING.

Wright, the former chief of staff to Prime Minister Stephen Harper, is expected to face a grilling from Duffy’s lawyer Donald Bayne about what – if anything – Harper knew about Wright’s decision to personally repay Duffy’s $90,000 in expenses.

As well as wonder who is more likely to be a LIAR, Harper or Wright?

Bayne has already read in court from a police interview with Wright in which he claims Duffy may have had a legal and technical argument to claim the expenses. But he said the prime minister ordered repayment anyway.

Which of course could be FATAL... 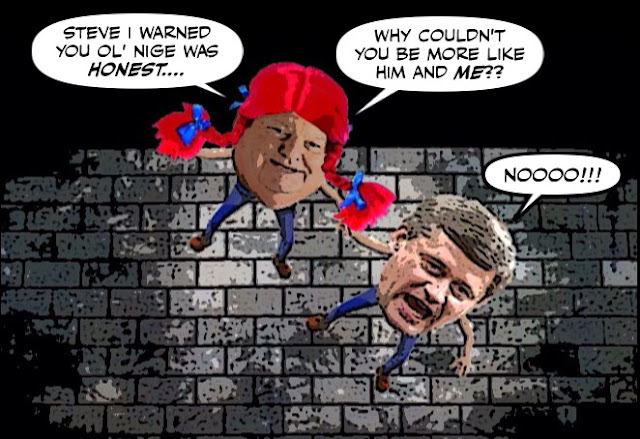 But believe it or not, those sex and senate scandals weren't the only ones to have Harper looking like a mess yesterday, or looking for a closet.

Because in the evening on the CBC, came news of the activities of another one of his stellar appointees...

And that scandal couldn't be more devastating.

Because it can only remind Canadians of the hypocrisy of Stephen Harper. And that when him and his Cons talk about austerity, they mean austerity for others not THEM.

And of course can only remind Canadians as well of the disastrous state of the Harper economy... 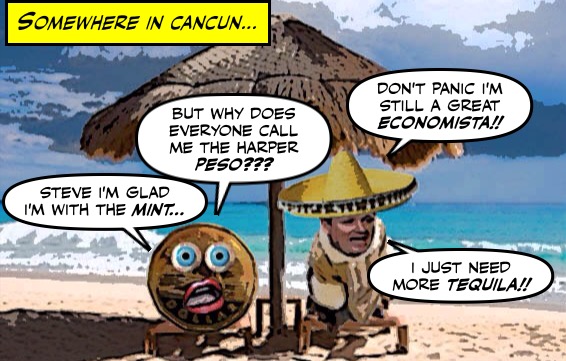 And why most of them won't be able to afford a fancy vacation anytime soon.

Which won't make them happy when the election is held in the chilly days of October, and he's still claiming he's a Great Economist Leader.

And to make matters even worse, today is the day Pope Francis officially releases his encyclical on climate change.

Which can only make Harper look even more like dangerous climate change denier.

Or even more like a man who is running out of time... 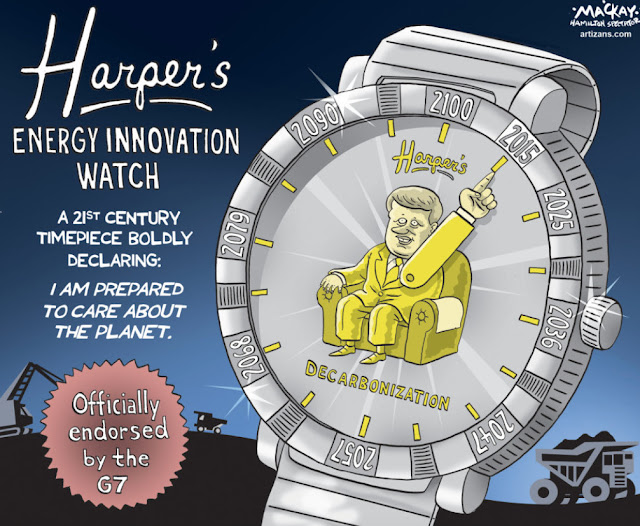 And is now too dangerous to be allowed to remain in office.

Which finally helps explain why he was looking like this in Question Period yesterday.. 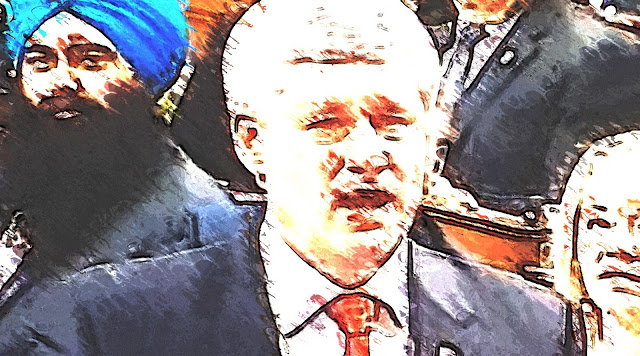 Because you don't need a good camera to tell you that's NOT what a winner looks like.

That's the face of a desperate man who can see the writing on the wall.

And knows that his time is indeed almost over.

Knows that if his scandals don't bury him, or jail him, we will.

And that he is going down...

Instant Karma going to get this MF.

Add to the fact that neither he nor his Defence Minister are doing anything about sexual harassment in the military. Firing the General, even if his term is almost up, would send a message to the military that this is not acceptable. Not firing him is like accepting that it is true. Tired of apologies about everything. Let's see action.

Am I the only one who can't help thinking about how Harper slithered in on the coat tails of the great Liberal scandal under Paul Martin..and how he beat that thing to death for as long as he could...talk about the pot callin' the kettle...

Scandalous Cons have convicts ever been any different in history? No Harper is another cheap tart for his overlords...

Actually Simon those pics look like art to me. After we defeat him you should have the best ones blown up to something like four feet by six feet and have a gallery showing entitled something like the end of dark days in Canada end of the Harper con era. This is their post mortem -------------> Now go straight to jail.

I agree, that the pictures taken of HARPER show him for exactly what he is ... a HATE MONGER ... any Canadian who cannot see through this "CREEP" has got to be deaf, dumb, blind and STUPID !!!! ... Has HARPER forgotten that there are many people of Russian descent living in Canada??? ... I happen to be one of them and I am very proud of it ... I can speak "ALL" of the slavic languages ... does this mean I shouldn't have Polish and Ukrainian friends-relatives any more??? ... HARPER is acting like his friend BENJEE, who, went on TV during their election to get people to "get to the polling stations" so as to not allow "ARABS" to win seats??? ... if I am wrong on that comment, I apologize, but I do NOT think I am ... how dare HARPER, supposedly a leader of this great country Canada, insult Russia and Putin non-stop ... Ukrainians should also realize, HARPER is using AND insulting them as well, maybe NOT through his words, but definitely by his actions ... STOP playing right into HARPERS hands ... HE is doing nothing for you ... My final comment today is that HARPER showed his complete ignorance, to every NATIONALITY, when the "Truth and Reconciliation" report was completed ... a 7 year study??? ... HARPER must have commissioned this??? ... TSK TSK MR.HARPER ... U should be totally ashamed of yourself !!!! ... May ALL of the CANADIAN voters send you packing in October ... HARPER is a racist ... HE is ugly on the inside, as well as the outside ... HARPER should not go away "MAD" ... HE SHOULD JUST GO AWAY !!!! ... ... TY

The scandals are almost daily now and I couldn't be happier for Stevie. He sure knows how to pick them.
I wonder if Meredith and Toews have ever gone on double dates with their little girlfriends? Roller skating, the arcade or maybe a sleepover. I wonder how Stevie's ex drummer is doing these days, anybody know?
Here's a slogan for Harper, "If you're with Stevie, you're with the pedophiles".
JD

hi Steve....the only Karma that counts is defeating him and his Cons in the next election....

hi anon....I completely agree with you, but it's not going to happen. Lawson is retiring soon and the Cons have decided to let him continue as chief until then. As I just told Steve, if we want change we have to change the government...

hi mizdarlin...no you are not. Harper propelled himself into power by using a Liberal scandal and promising to do better. Only to end up presiding over the most scandalous government in modern Canadian history. As the clip in that CBC video showed his hypocrisy knows no limits. And it couldn't be more disgusting....

hi Mogs...I don't know if those pics are art, but I have to confess there was an in joke involved. My companion Seb had to scoot off to a wedding in the Saguenay, and took my not so new phone with him by mistake. Leaving me with his newer, but cheaper phone with a rotten camera. !!#@!!!
But in my attempt to improve the shot, I put it through a filter, and was quite pleased with the result. That will not however save Seb when he gets back... ;)

hi anon...well I think we all agree with your sentiments. Whatever we do we cannot let Harper and his horrible Cons win the next election. Help organize the resistance to them in your riding, and we will make October 19th a wonderful day of liberation...

hi JD...yes the sandals are coming fast and furious and one can only hope they will make a difference in October. I'm sure they will, however I watched a live broadcast of a Harper newer in Toronto today, and if you can believe it, not one of the local reporters asked him about the Meredith scandal. It's pretty hard to get me down, but that WAS depressing....

When you look at the Con ad regarding Trudeau not being ready. Well if being ready means having very poor judgement and appointing people who turned into crooks to the senate, thank heavens the kid isn't ready. You bet the kid isn't ready. He hasn't appointed anyone awaiting sentencing or waiting to be sent back to Canada from Panama because of a $22M fraud. And of course the best to date, appointing a senator who was getting it on with a 16 yr. old. If those are the qualifications for being P.M. than thank heavens the other party leaders will never be ready, but I'm willing to give any one of them a try.

This P.M. may be considered 'ready' by his party, but really what has he done:

1,200 murdered women not on his radar
continued fall in employment and increased income inequity.
scandal after scandal with his appointees
going to war where it isn't warranted.
thinking its a good thing to drop bombs on people which cost $90K a piece but not having sufficient carbines for RCMP in Canada
having almost 400 women file a class action suit against the RCMP for rape, assault, et.
a military where sexism is rampant.
plans to cut $30 Billion from our health system in 2017.