I don't expect much, or anything really, from the barbaric kingdom of Saudi Arabia.

The home of the beheaders, and the nexus of terrorism.

But even by its brutish standards this is outrageous.

Saudi Arabia's Supreme Court has upheld the sentence of 1,000 lashes and 10 years of imprisonment on blogger Raif Badawi, despite a foreign outcry. Speaking from Canada, his wife Ensaf Haidar told the BBC she feared his punishment would start again on Friday.

Because this is medieval barbarism...

If Badawi, who has done absolutely nothing wrong, is flogged every Friday for the next four moths he could die.

And what makes it even more disgusting, if that's possible, is that even though his wife and children are refugees in Canada... 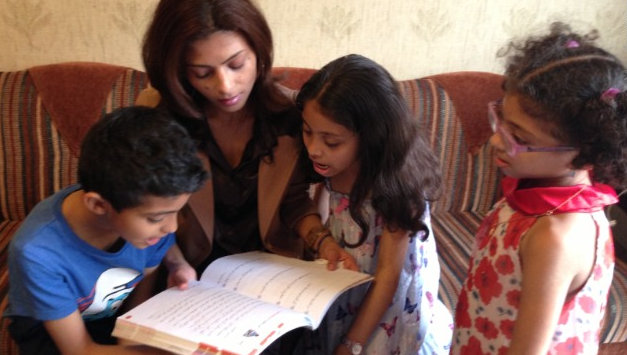 And every Friday will be a day of torment for them as well, Stephen Harper's bestial Con regime has done almost nothing to save him.

For all the wrong reasons.

Canada’s Department of Foreign Affairs has not done a human rights assessment of Saudi Arabia in the past two years even though Ottawa is brokering a $15-billion arms deal to sell fighting vehicles to Riyadh, a regime with an abysmal record for treatment of women, dissenters and offenders.

Departmental records also reveal that Ottawa is issuing export permits connected to the light armoured vehicle (LAV) sale announced in 2014. Under Canadian law, the government should do an official assessment of whether the transactions will further endanger human rights in Saudi Arabia.

Because for the Cons money trumps human rights and the terrorist menace, no matter what their depraved leader might say.

You know what he thinks about rights and bloggers... 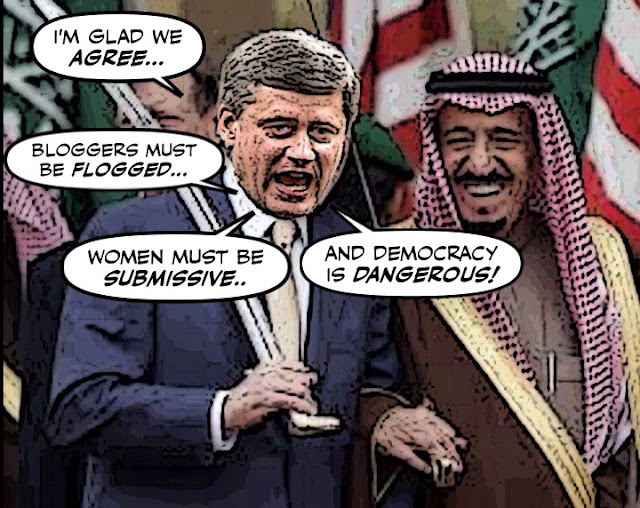 And his cowardly depravity knows no limits... 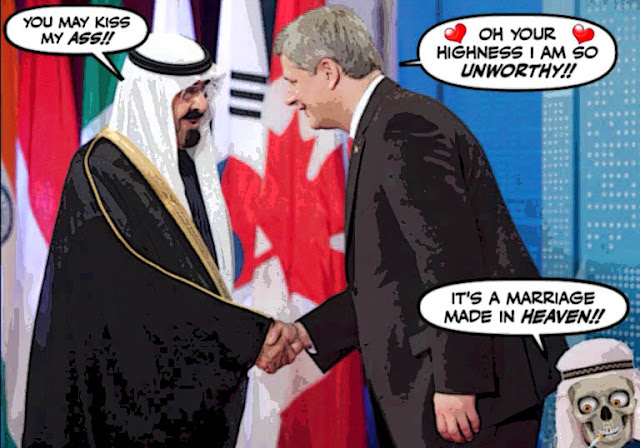 And all I can say is what I've always said: 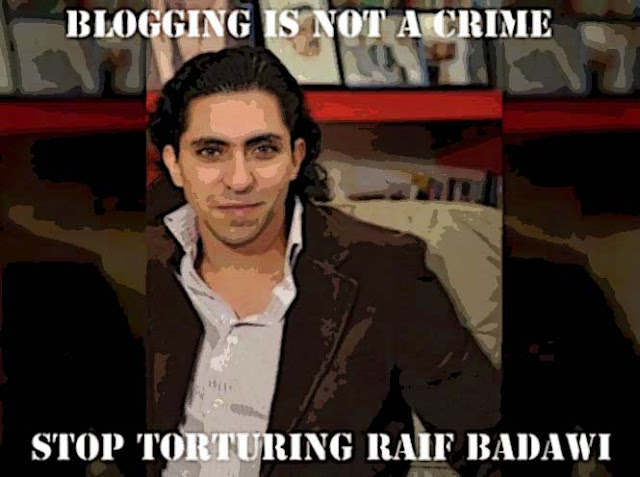 Let's make sure the Saudi beasts hear that message.

And let's use this latest atrocity as yet another reason to get rid of our own bestial monster.

Before he degrades us further.... 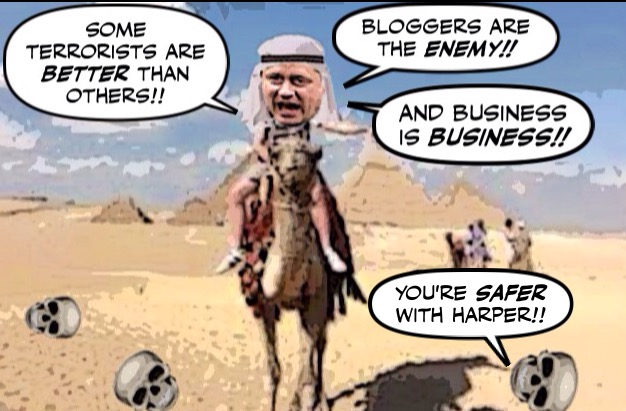 Think about it this way. Stephen Harper is just days away from extinguishing internet freedom in this country with his totalitarian bill C-51.

Without a squeak, the despicable Harper Government has recently allowed control of the Canadian Wheat Board, fall into European and Saudi Arabian hands.
From Wikipedia: "Amid criticism, the Canadian Wheat Board's Single Desk marketing power officially ended on 1 August 2012 as a result of Bill C-18, also known as the Marketing Freedom for Grain Farmers Act, which was tabled by the Harper government and passed in December 2011. The Canadian Wheat Board changed its name to simply CWB, reflecting its changed status. CWB continues to operate as a grain company, although the bill also set a timeline for the eventual privatization of CWB.

On 15 April 2015, it was announced that a 50.1% majority stake in CWB would be acquired by Global Grain Group, a joint venture of Bunge Limited and the Saudi Agricultural and Livestock Investment Company, for $250 million."
More grounds for the Impeachment of Stephen Harper for Crimes against Canada!

In addition to supplying small arms and Light Armoured Vehicles (LAVs) to Saudi Arabia, Canadians , via the Great Economist Harper, also gave them all the grain cars, elevators and other assets of the Canadian Wheat Board for the "princely" (not a Saudi Prince,though) sum of $250 million!
Assets bought and paid for initially by Canadian farmers!

This all fits into the "plan"!

I wonder if you google "public enemy #1" if harper's picture shows up yet?

Yes, there is steve trying to be a big deal at the G-7. Did he bring up the case? Not so much. Why not? probably doesn't like bloggers. he loves those Saudi's though. Just his type of guys. well steve does believe the second coming is "imminent" so perhaps he thinks the second coming will save the blogger before the Saudi's kill him. Oh, I forgot, the blogger is Muslim.

No wonder Steve likes el gordo. El gordo gave B.C. Rail away to his bag man for a billion $ and Steve gave away the Canadian Wheat board to the Saudi's for far less. Can't you see it in 10, 15 yrs a great drought and any wheat Canada produces goes to Europe and Saudi Arabia. Nice going Steve. Canadians could starve. I do hope if it comes to pass, Steve will be one those who starve. What goes around comes around.

Jason Kenny was at the Bilderberg Meetings in 2014........all part of the New World Order!

Steve is off his rocker and so crazed he does not even know it. One day he is friends with the Israelis next day the Ukrainians day after cozy with the House of Saud [who are imposters and a sworn enemy of Israel] Harper is like a globe trotting trollop. I am hoping it backfires in his face or better still he gets beheaded in Saudi Arabia....

The west has disrupted the normal order of things in the middle east to the point that its like biker gangs out of control. The only purpose of today's friends are to help survive to fight again tomorrow. It is likely that their sponsors think that if they can keep the game balanced they will weaken each other to the point that they will not be a threat to anyone else. The only problem with that is that they could morph into a beast capable of destroying the spectators. Harper is totally clueless about the high stakes game of friends today / enemies tomorrow and places Canadians in harms way for a few lousy votes and to court the US on pipeline approvals. It would be much better to spend the money helping some of the refugee victims of the democratic liberation of Libya.

Steve isn't a bright boy and his education was in "economics"???? Would appear they didn't teach much about history. Steve is so small town, he doesn't understand the world at large. when you see Steve at these international events, he seems right out of place. wonder if he even knows which fork to use. Even his suits don't fit him properly.

Canadians being at the Bilderberg is not so they can "inform" the Bilderberg. its just to question them to ensure they have the latest information and to know how far they can take advantage of Canada by having their own government do it for them. The Bilderberg is made up of elites. Canadians who attended aren't international elites. They're more like small town idiots. Like what could Kenny ever tell them that they didn't know, ditoo El gordo. its just to make them feel good that they are invited, so when they are asked to do something not in Canada's interest, they do it.

The First Canadian to be invited to Bilderberg was Mansbridge. I would suggest they wanted to speak with him to have a clear understanding of Canadians. He provided them that. Since then the rest are there to set them up for the "fleecing".

The Bilderberg was established following WW II. the first president was the current king of the Netherland's Grandfather. its a small country with a lot of business interests. Its called Royal Dutch Shell, the grandpappy of all multinationals who set the low low standards of occupying other countries and taking their natural resources. They were in Indonesia. hell they were even in Tiwain for a while in the 1500s.

hi hinofan...yes I was sorry to see the Wheat Board sold, and even more distressed to see it bought bt the Saudis. And let's not forget, irony of ironies, that they are deliberately driving down the price of oil, which is badly hurting Steve's Alberta. And let's not look at the way the Cons are mouthing off about terrorism, while clutching their Saudi boyfriends, who are as I said in my post the nexus of terrorism. I'm all for supporting good jobs, but selling our souls for them as too high a price to pay...

hi anon...no not yet, but you can be sure the verdict of history will be a harsh one...

hi e.a.f... yes I'm sure if the blogger was a Christian Steve would have raised the matter a tiny bit more forcefully with the Saudis. But the end result would probably have been the same. Human rights mean nothing to those miserable Cons, and business must come first. If he's prepared to torch the planet for some oily short term profits he really is capable of ANYTHING....

hi Kathleen...if Jason Kenney is part of the New World Order, I want someone to stop the world so I can get off it... ;)