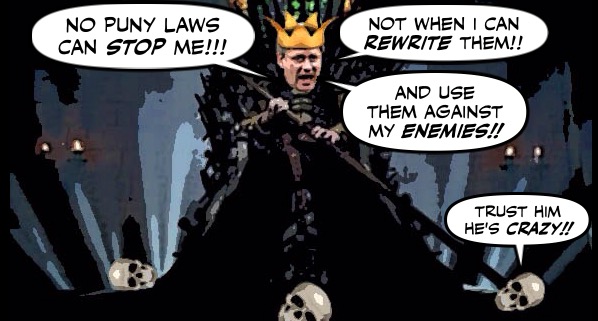 For years Stephen Harper has made a mockery out of our democracy, turned our parliament into a Roman circus, attacked the courts, and flouted the rule of law over and over again.

Like some deranged ruler on some monstrous throne, who is so crazed with the lust for power, and so morally depraved, he now believes he's above the law and can do anything he wants.

And for years he has managed to dodge and weave, and claim that he knows nothing about anything bad that ever happens in his sinister office. Or the dungeons of the PMO.

But now at last, he may have finally gone too far.

Prime Minister Stephen Harper acknowledges his government pressured the Mounties to swiftly destroy long-gun registry records, even though they’d been warned it was illegal.

An exchange in the House of Commons on Tuesday marked the first time the Conservative government has flatly asserted that it was actively encouraging the RCMP to delete the registry data in 2012 — notwithstanding an ongoing investigation by information commissioner Suzanne Legault and a written promise from the public safety minister to respect the law.

Because when he pressures the national police force to commit an illegal act. And then tries to protect the police and himself, by rewriting laws that were in existence at the time the illegal act was committed.

After being informed this March of Legault’s case for laying charges, the Conservatives responded by retroactively rewriting the 2012 law, backdating it to October 2011 when the long-gun bill was first presented in Parliament, and burying the amendments in a 167-page omnibus budget bill.

Legault has called the government’s move a “perilous precedent” and a history-denying “black hole” that sets the stage for retroactive cover-ups of more serious government wrongdoing, including electoral fraud and spending scandals.

He is guilty of rewriting history, like Big Brother himself... 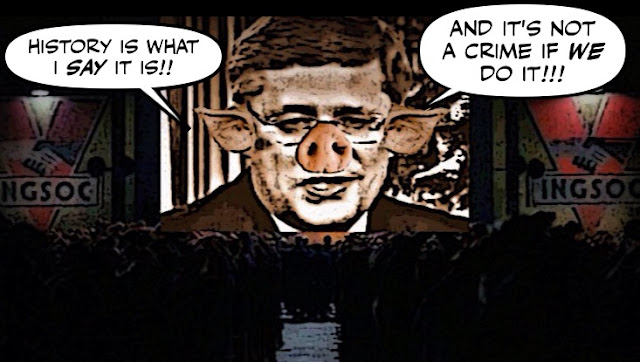 He is guilty of counselling a criminal act.

And when on top of all that he lies like a thief, by claiming that this was all about the move to destroy the gun registry. When the gun registry would have been destroyed whether the RCMP had waited a few weeks or not.

Like he does in this exchange with the Liberal deputy leader Ralph Goodale...


He is clearly desperate, absolutely shameless, and capable of saying and doing ANYTHING.

But the good news is that the Ontario Provincial Police are investigating this  scandal. And if they determine that the RCMP did indeed break the law, as I can't imagine they won't, they will come under pressure to also lay charges against Boss Harper and his PMO gang.

And whether they do or they don't, the controversy and the stench of criminality, along with the stink lines of the Duffy trial, will linger in the air all the way to the election.

And Harper's decision to rewrite laws, even as he passes his equally Orwellian Bill C-51, can only convince more Canadians that he is too corrupt AND too dangerous to remain in office.

Because he is dangerous, he is out of control, he does think he can get away with anything.

And for that reason alone he must be defeated.

Justice and decency must be restored.

And the mad king on his monstrous throne.

Must be restrained as soon as possible... 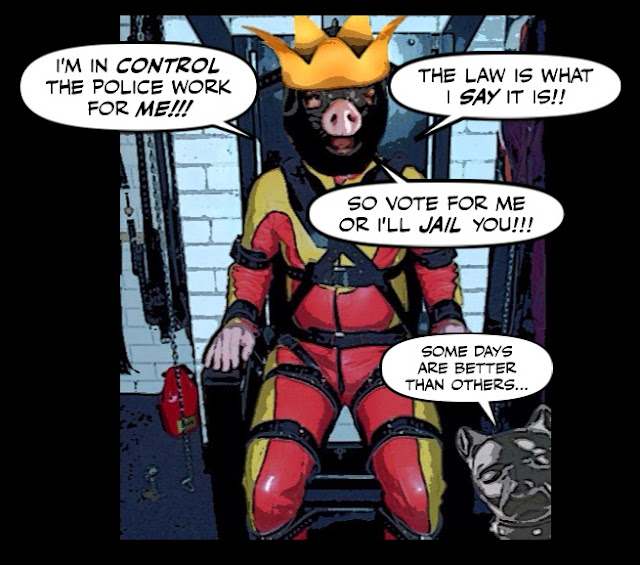 Sigh. What to do with such a disgusting criminal running our country?

I feel bad for the gun nuts. They were so easily manipulated by the putz that is Harper and actually helped bring him to power.
What all the gun nuts (and, of course, honest legitimate owners of guns) forgot in their zeal to scrap the gun registry is that Harper would bring about something SUBSTANTIALLY more heinous than the gun registry: Bill C-51. Now, politicians and the law enforcement of the land can label anyone a 'terrorist' or claim they've been 'radicalized' when they don't agree with Herr Harper.

People: please remember that Harper is the MASTER of double speak.

If his mouth is moving, he is lying.

His hands were shaking the second time he spoke.

So let's see, the Ontario Provincial Police are investigating the Royal Conservative Mounted Police for engaging in criminal activity. That's just sad. And where is Commissioner Bob during all this? Hiding under Steve's desk?

So the truth comes out! Stevie is not trying to protect the RCMP but his own sorry ass. Hopefully the OPP will keep the investigation active although I am sure our tax payer dollars are funding high priced lawyers to shut it down .... same as for the senate documents that show "province of residence" was poorly defined. First you charge someone with fraud because they refused to "take one for the team" and then withhold evidence that might help the defendant. This is the type of thing that Putin does when the opposition becomes too vocal. At least for now Putin is better at it; no wonder Stevie dislikes him so much.

Harper has lost any morality that may have remained in his scandal ridden party. The audacity of re-writing a law to his advantage is beneath contempt for a democratic society and now he admits to coaxing the RCMP. This guy's off his rocker. History will remember him as the most corrupt PM ever and I hope the inquiries into his criminal activities follow him to the grave.
JD

That's not saying much about the RCMP either. They appear to be as crooked as Harper himself. Even though I have a nephew who is an RCMP and a very good one I might add.

hi anonymous....yes he is disgusting and he is a criminal, and the day he was elected was the most disastrous day in modern Canadian history. But the good news is that even some in the gun lobby have been mobilizing against Bill C-51, and when others realize that the rewriting of history has nothing to do with guns, and can be used against them, I'm sure more will join our side. And of course I remain confident that we will in the end defeat the monster. And won't that be a glorious day?

hi anon....yes Mulcair's characterization of his government as a Banana Regime really shook him up. And seeing how easily he is rattled makes me really look forward to the TV debates....

hi anon....well it could be worse, the RCMP could be investigating themselves. I have no idea what's going to happen now that the law has been rewritten. But what I do know is that if the OPP says the RCMP would have been guilty if the law hadn't been changed, the optics are going to look horrible. And its the perception of scandal that will do the Cons most harm...

hi anon...he's trying to protect the RCMP, but only because if he didn't that scandal would hurt him, And it is I believe one of the most outrageous things that filthy regime has ever done. But the good news is that Harper and the Cons are already operating under a cloud, and that kind of stunt will only make them look worse. The damage is cumulative, it fuels the desire for change, and that is what in the end will most likely bring them down...

hi JD....I'm glad you feel the same way I do. The audacity or nerve of the man, to practically brag about pressuring the police to break the law. But it is more evidence of the way he is corrupting our institutions, and it should only make it easier to persuade Canadians that the Cons must be evicted from power before they corrupt everything in this country. Give them enough rope and they will hang themselves...

hi Irene...no it doesn't say very much for the RCMP, which is getting perilously close to earning itself a reputation as Harper's Police. I also know that there are many decent officers in the force, and I don't blame them. I blame their superiors for not having the courage, or the morality, to stand up to the Cons. They should understand that not only are they playing with fire, they are risking the future of the force...

I for one don't believe that the long gun registry was destroyed at all.Having that registry buried somewhere is a choice weapon for the future and gives the ability to seize weapons at his every whim and desire.Don't forget the flood at High River and then ask just how the horsemen knew which houses they needed to break into in order to remove legally held weapons.