What The Con Terrorists Did To The People Of Ottawa

The Con terrorists held the people of Ottawa hostage for three long weeks, so they could torment them at will.

They blasted their air horns day and night to try to deprive them of sleep, and poisoned them and their children with their toxic diesel fumes.

They intimidated and threatened them with their vile racism, misogyny, and homophobia.

And now we're getting an idea of the mental toll the Con trucker thugs inflicted on their helpless victims.

Putin's War and the Threat of Nuclear Catastrophe 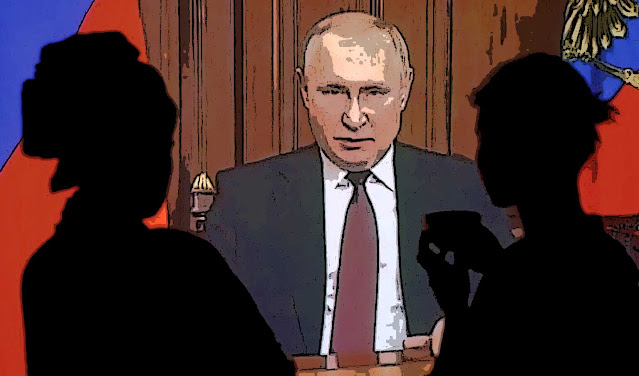 He is a nasty little man, the kind of little man who needs to hurt others to make himself feel bigger.

He is a foul bully who only Cons and political thugs like Donald Trump can admire,

He claims he wants to "de-Nazify" Ukraine.

But who is the Nazi now?

Candice Bergen and the Right-Wing Conspiracy 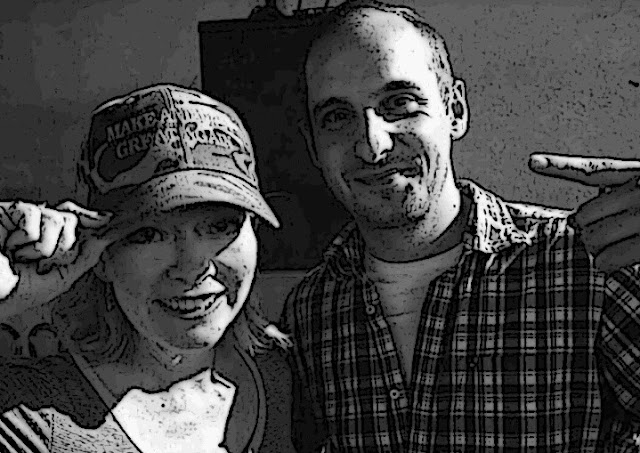 I thought I knew Candice Bergen. I knew she was an icy religious fanatic, a woman who hates Justin Trudeau so much she can barely contain herself.

Or contain her groupie passion for Donald Trump.

I also knew that she encouraged the trucker thugs to invade Ottawa, and made them feel welcome. Until she had to cut them loose in a hurry because they were making her look bad.

But something she did in the Commons yesterday, during the debate on the Emergency Act, absolutely blew my mind. 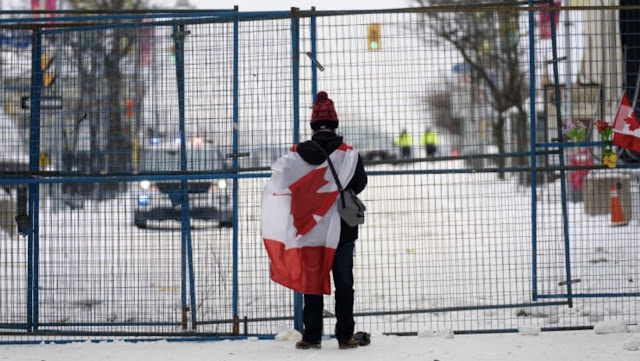 It's amazing what a difference a few days can make. Just three days ago this poor loser might have thought the Con terrorists were winning.

As he bellowed and belched and pulled chunks of roast pig out of his teeth.

Like so many trucker fascists he probably still thought that he could terrorize the long suffering people of Ottawa, topple the duly elected government, and put Justin Trudeau on trial for treason.

But Trudeau had no intention of giving in to them, the police had a brilliant plan, and Ottawa was liberated at last.

The Con Terrorists Holding Ottawa Have Finally Been Defeated 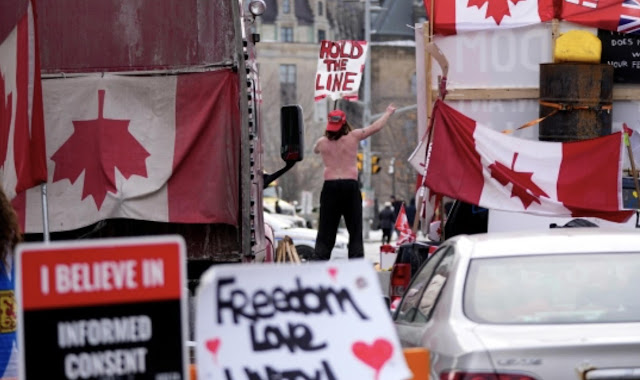 So they could keep living it up, with a lot of American money.

Keep demanding that the government surrender, and that Justin Trudeau be arrested and executed for "treason."

Soaking in filthy saunas, and roasting a whole pig to show their contempt for the poor people of Ottawa. 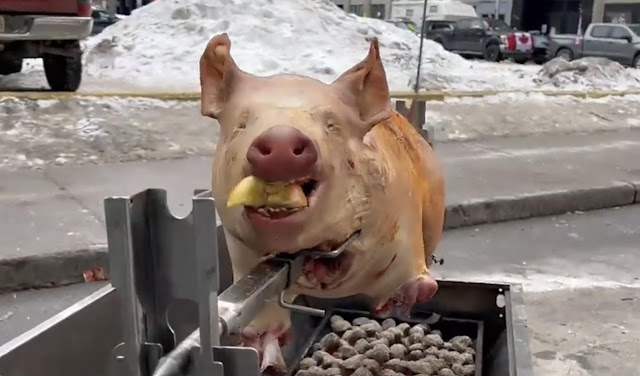 While torturing them further.

But luckily that didn't last long.

For the police finally moved in, and soon many of the trucker Cons were the ones squealing like pigs. 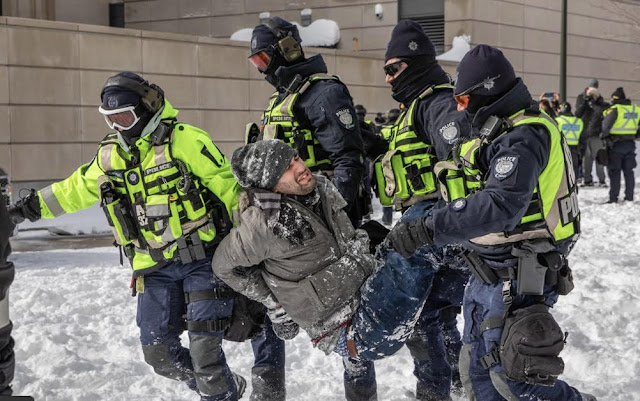 As they and their top leaders were arrested.

Large numbers of police officers are moving in on protesters in downtown Ottawa and making arrests — including high profile organizers Tamara Lich, Chris Barber and Pat King — during an intense clash with the demonstrators who have so far refused to leave the area. 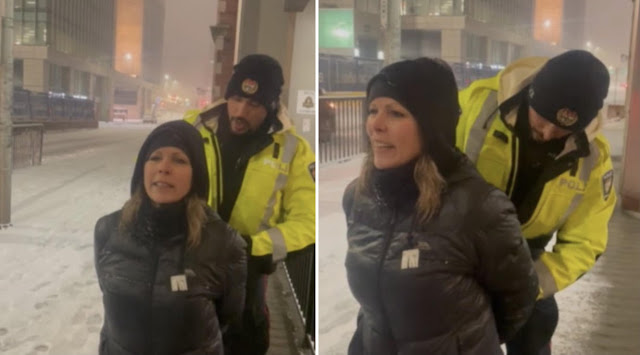 Their bank accounts are frozen.

And one truck after the other finally left, or was towed away. 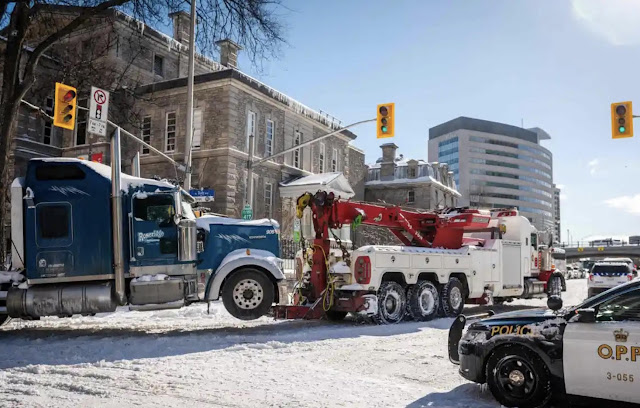 It's was a wonderful sight, and I was impressed, and at times frustrated, by how restrained the police behaved..

But there was a reason police had to be very careful, and that's because many of the hardcore trucker thugs, are religious fanatics.

Christian faith — with an overtly evangelical feel — flows likes an undercurrent through the Freedom Convoy in Ottawa.

It's unclear how many of the roughly 4,000 people who gathered in the Parliament precinct this past weekend call themselves Christians, but the biblical references were everywhere — in the hand-made placards lining the stone and iron fence at the border of Parliament Hill reading, "We are praying for Justin [Trudeau]," quoting parts of Psalm 23 or paraphrasing 1 Corinthians 1:27 in the New Testament:

"God chose the foolish to shame the wisdom of the wise."

And all through the occupation they were everywhere... 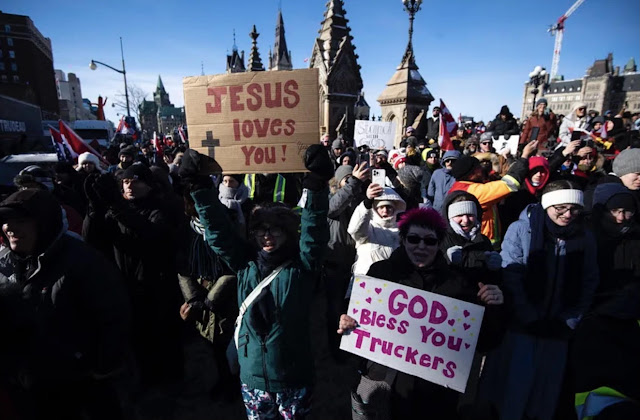 And I mean everywhere... 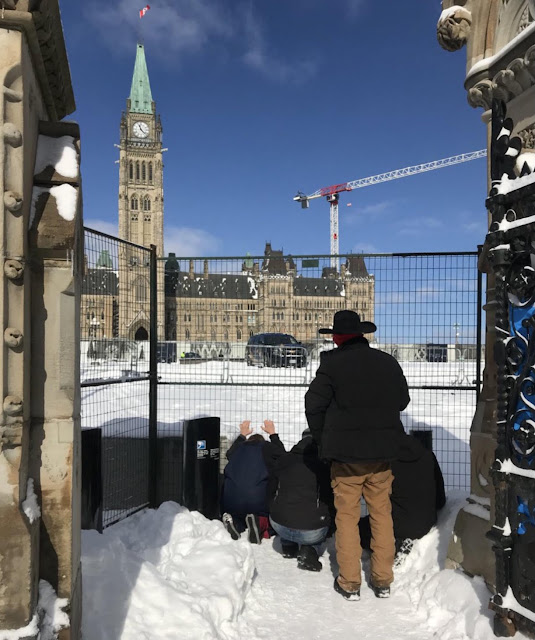 Trying to replace science with bullshit from their Bibles... 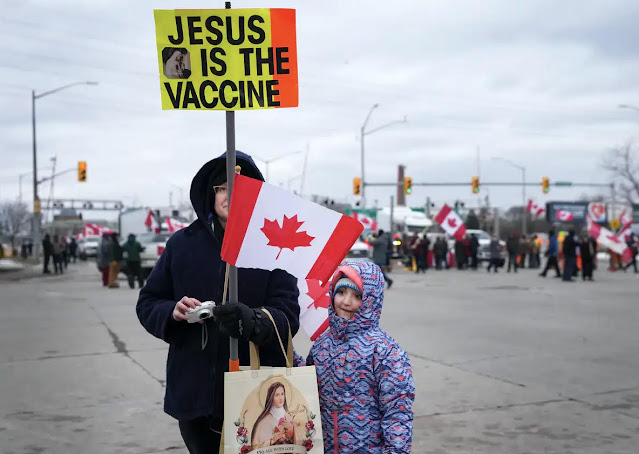 Or at least heed the voices in their heads.
This one is particularly moving, or should I say disturbing? 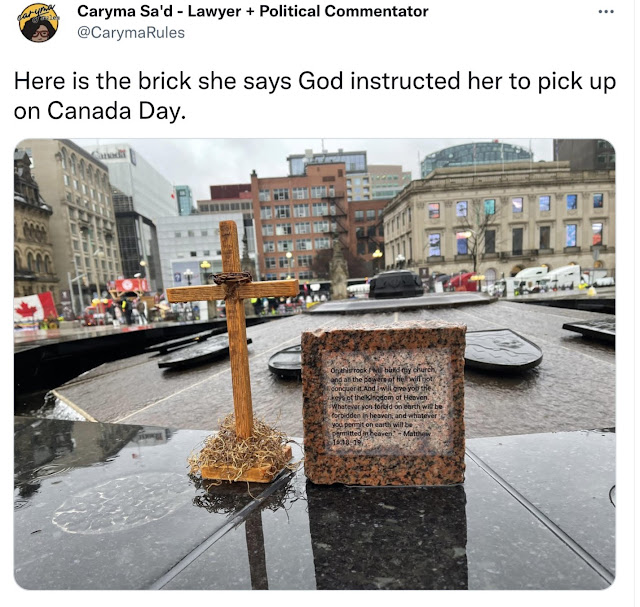 And isn't this special?

Starting Friday, "Jericho marches" began circling the parliamentary precinct every morning. The name refers to the Old Testament story of the Israelites walking around the walls of Jericho for seven days. On the seventh day, the Israelites marched seven times, blew rams horns and shouted. The walls came tumbling down.

They were trying to bring down the government by walking seven times around our parliament, and honking blowing their horns.

But don't laugh, or be fooled, those Con kooks and assorted anti-vaxxer fanatics really are dangerous.

Children are being used as human shields.

Police officers are being assaulted. 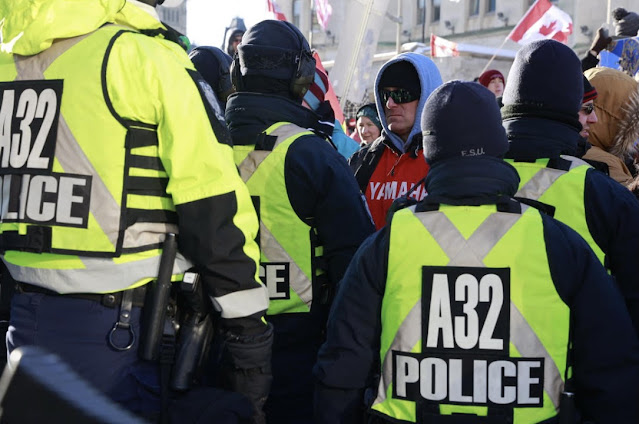 And yet, despite all of that, and the economic damage they have done to this country, the Cons are still supporting the trucker terrorists.

No doubt because so many of their MPs and supporters are also under the sway of the religious right. 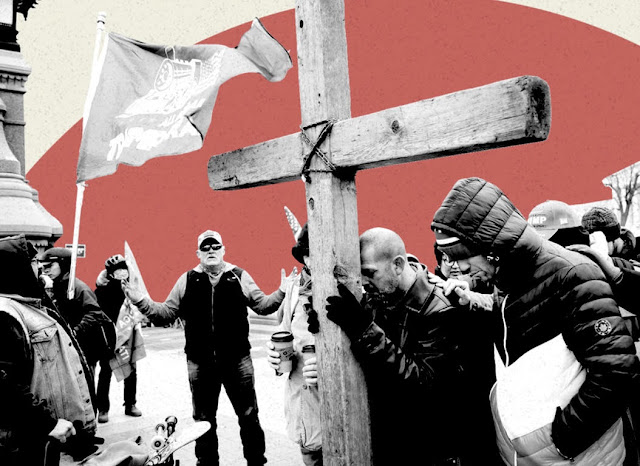 Take Candy Bergen for example. She now says she's against the blockades, but she is also against the Emergencies Act.

Even though she encouraged the terrorist truckers to occupy Ottawa, and she couldn't have welcomed them more warmly. 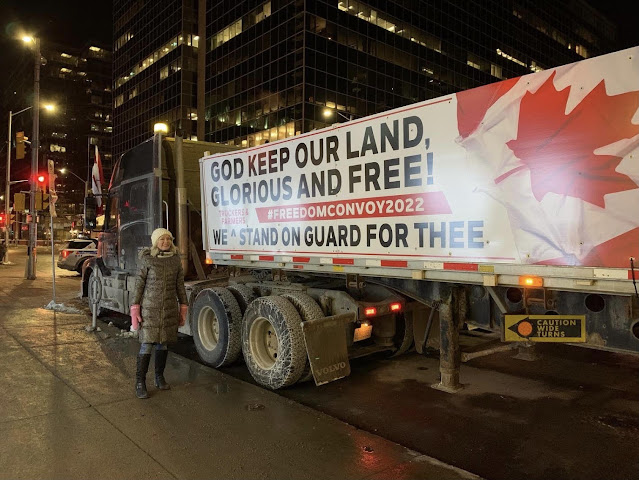 Especially the trucks with the word "God" on them, like that one or this one... 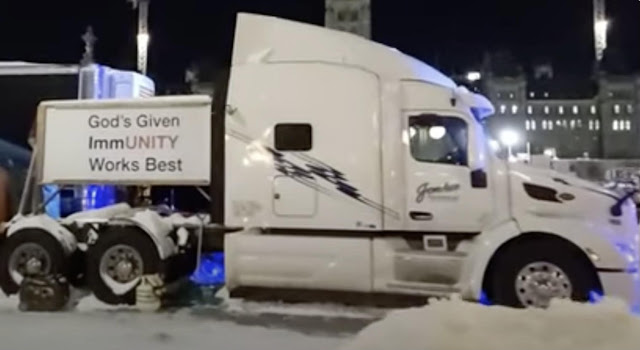 And then there's Pierre Poilievre who is making it clear where he would take this country... 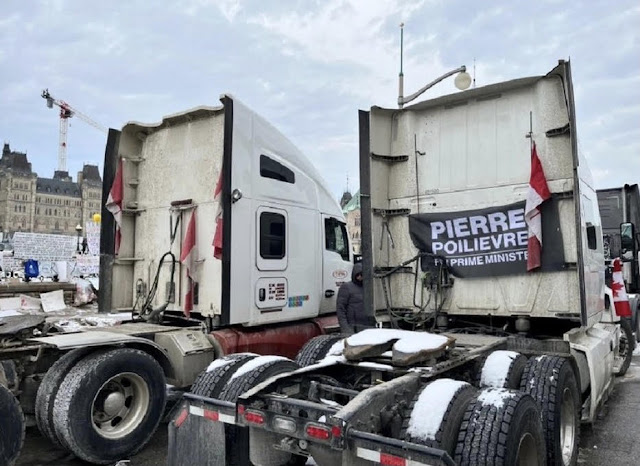 Which should also make it clear why he should NEVER be Prime Minister.

For when you collaborate with the trucker terrorists who held a Canadian city hostage for more than three weeks, you are no better than a terrorist yourself. And you will pay for what you have done, all the way to the next election.

This evening the police were still clearing away the last of the Con fascists and their trucks. 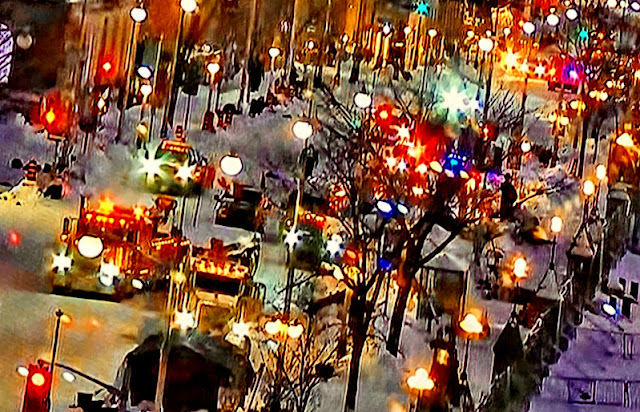 But the battle has at last been won.

Wellington street looks and smells cleaner than it has in a long time.

And along with the police and the people of Ottawa, Justin Trudeau was the big winner. 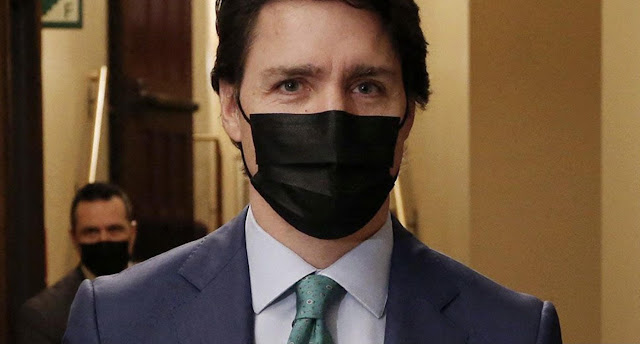 He refused to negotiate with the terrorists, even when they threatened to kill him and his family.

He brought in the Emergencies Act to break the backs of the religious fanatics who thought they could turn us into a theocracy.

Canada still lives, and our long nightmare is finally over...

The Slow Collapse Of The Con Terrorist Truckers 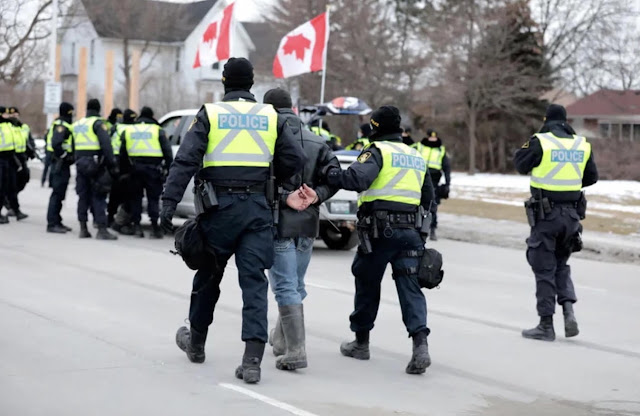 The Con terrorist assault on our country has been going on for more than two weeks, but at last the trucker thugs are showing signs of surrendering.

At the Ambassador Bridge, as in other places, they vowed they would not move until all vaccine mandates were scrapped, the government was overthrown, and Justin Trudeau was arrested.

But sadly for them, they were the ones who ended up being arrested, and led away like sheep all their bully words dribbling out of their rear orifices.

And if they thought that was scary, this must have been even scarier.

Who Are The Con Extremists Directing The Trucker Terrorists? 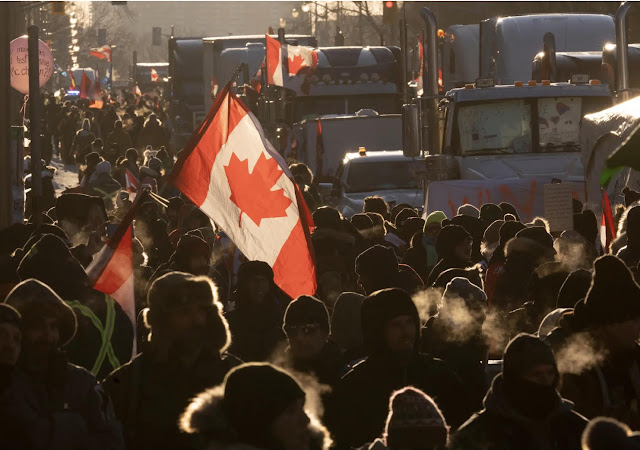 It's a hostage taking that has now been going on for two weeks. A horror show unlike any other this country has seen.

And in the murky darkness there are so many questions that need to be answered.

Who are these Con trucker thugs and what do they really want?

What shadowy right-wing extremists are orchestrating this all out assault on our country and its democracy?

And the burning question. 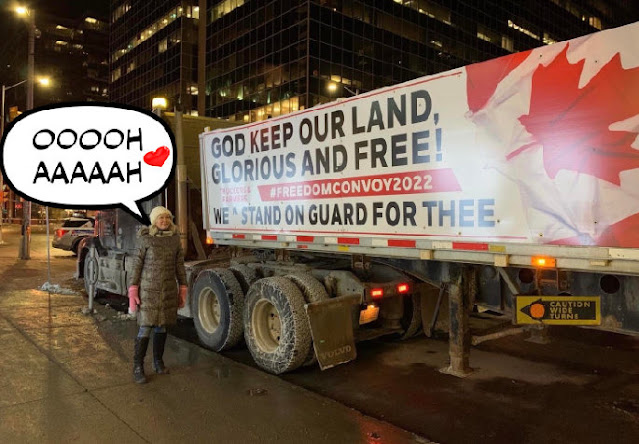 When Candice Bergen saw the terrorist truckers roll into Ottawa she couldn't wait to embrace them.

And on her first day as interim leader of the Cons she sent out an e-mail to Erin O'Toole's senior caucus team, suggesting that they should use the convoy to embarrass Justin Trudeau.

I don’t think we should be asking them to go home. I understand the mood may shift soon. So we need to turn this into the PM’s problem.

And even though the trucker thugs quickly became everybody's problem, her love for them never faded.

The Ugly Cons and the American Assault on Canada

It's been just over a week since Pierre Poilievre went on to an overpass to greet the terrorist truckers invading Ottawa.

Since then he has visited the truckers, and brought them coffee and donuts, even though he must have known many were calling for the overthrow of the duly elected government.

And the arrest and lynching of Justin Trudeau.

But now suddenly, Poilievre has stopped talking about the occupation. And with good reason.

The Far Right Delusions of the Political Thug Pierre Poilievre 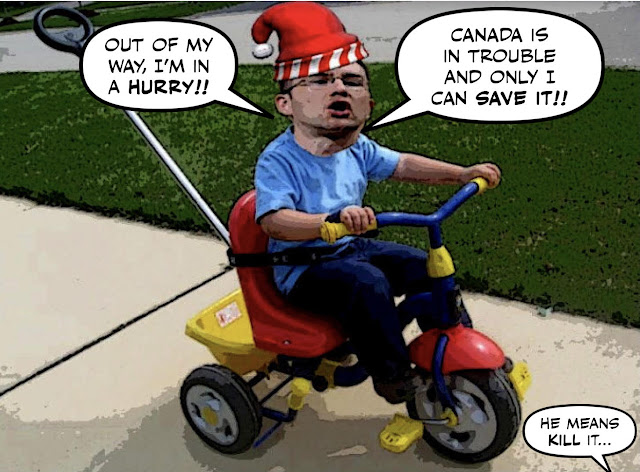 Pierre Poilievre could barely wait for Erin O'Toole to be dead and buried before launching his campaign to replace him.

He claimed that he just couldn't wait to save his decaying party, make us free again, and deliver us from Justin Trudeau.

And is now posing as a Con messiah.

Why Are The Scummy Cons Supporting The Terrorist Truckers? 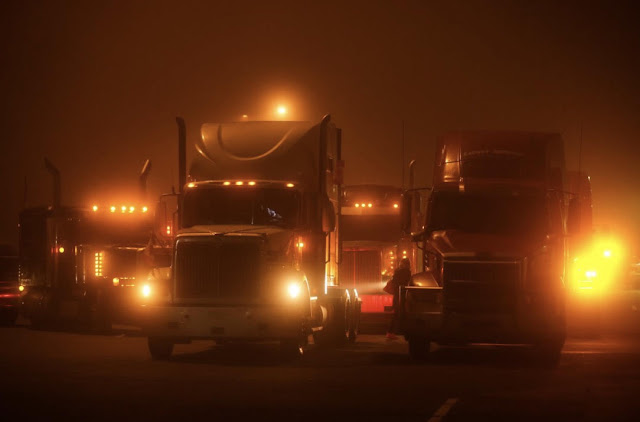 They rolled into Ottawa almost a week ago. They turned a protest into an occupation.

They've been terrorizing the people of that city ever since, with their Trump-like slogans and their airhorns.

And they say they're not leaving unless their demands to end all vaccine mandates are met, and/or the government resigns.

It's the most outrageous attempted blackmail of our democracy most Canadians have ever seen.

But at least now we know who they are...

The Brutal And Sudden End Of Erin O'Toole 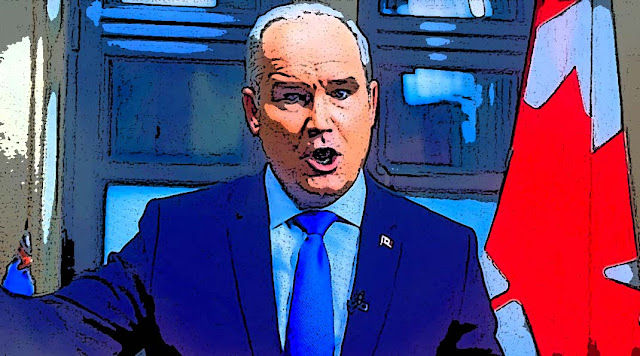 It is said that in the last few minutes of his very short life as Con leader, Erin O'Toole finally lost his cool.

His beaming mask slipped off his face, and he attacked his many enemies in his own caucus.

Which unfortunately for him, only made even more Con MPs want to fire him. 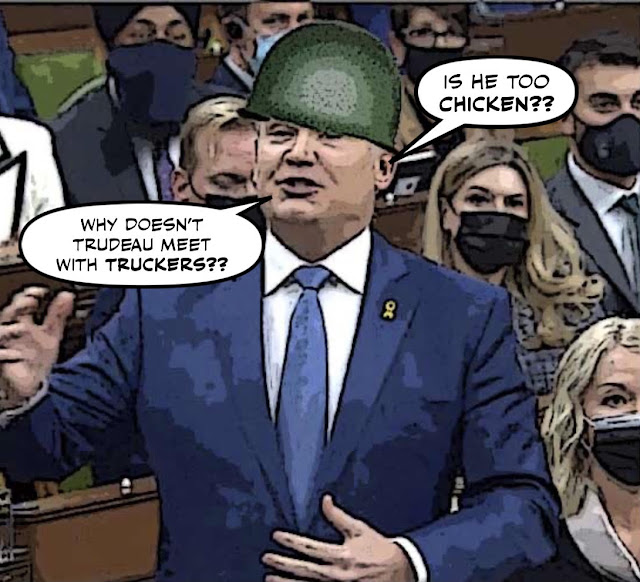 It was Parliament's first day back after a long break, and Erin O'Toole seemed particularly  agitated.

Waving his arms around, huffing and puffing, and demanding that Justin Trudeau meet with the truckers, even though many of them want to kill him.

So I can only imagine his shock when he found out that many of his own Cons want to get rid of HIM !!