Stephen Harper, the Merchant of Fear, and the Con's Ghastly New Attack Ad 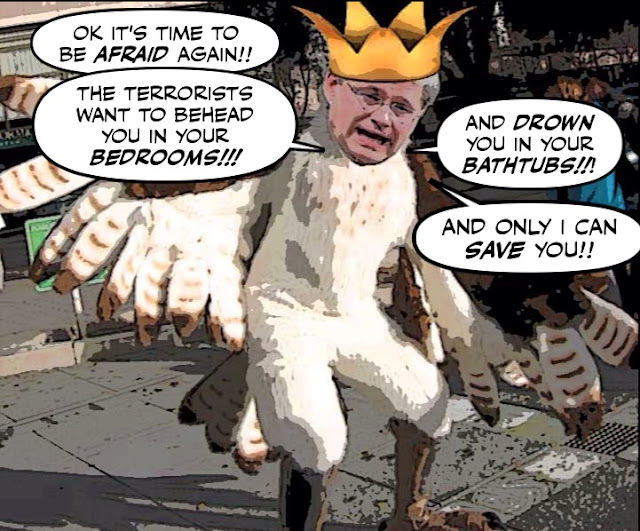 He's tried everything but nothing is working. And the situation couldn't be more desperate.

So Stephen Harper is going back to the basics. Back to what he does best.

Trying to scare Canadians into voting for him. And attacking Justin Trudeau.

Or as he does in the latest, and most grotesque Con attack ad ever, trying to do both at the same time.

Can you believe that ad, or what kind of a depraved mind it must have sprung from?

Or that he would have us believe that if we don't stop the ISIS beasts in Iraq, they will not only behead us in our bedrooms, they'll drown us in our pools or our bath tubs.

And it will all be Justin and Tom Mulcair's fault for not supporting his bombing mission and playing politics with war.

Justin Trudeau and Tom Mulcair are engaging in “irresponsible electoral politics” with their positions on the Middle East and the fight against ISIS, Prime Minister Stephen Harper charged Thursday.

When in fact his bombing mission is an almost total failure. It's clear that ISIS is only  interested in securing it own so-called caliphate, and unlike Al Qaeda not interested in attacking other countries.

Nobody has played electoral politics with that war as much as has Stephen Harper. 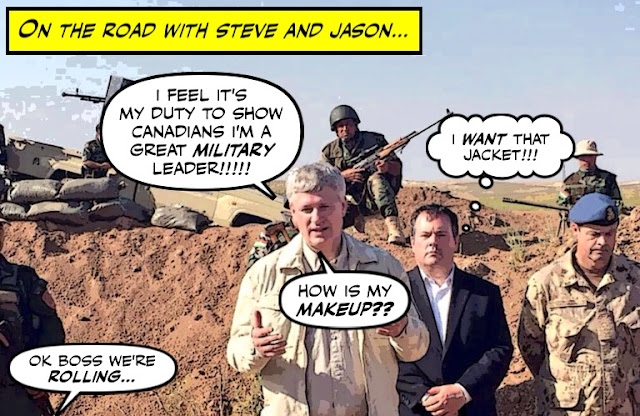 And for using ISIS' ghastly propaganda in that disgusting video, and violating his own anti-terrorist law, Harper and his foul Cons should be arrested.

“Here they are using the music and images of a terrorist organization. So not only does it undermine decency, but it undermines the credibility of the Conservatives on their own bill,” NDP MP Paul Dewar told CTV News.

But then of course he is desperate. He needs to scare Canadians again, it's all he's got left. He needs to sell fear like a salesman. He needs to make them tremble in their shoes, like he trembled in his closet.

But as Michael Harris points out, what happens to a fear merchant, when people stop buying? 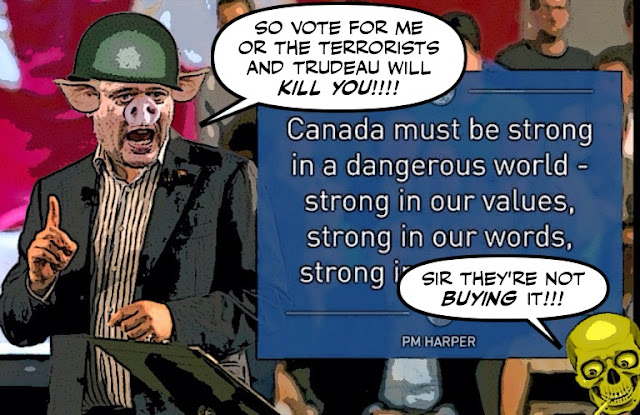 You can tell a lot about people by what they believe in. Money. Art. Jesus. Bingo. All roadmaps to the soul. Stephen Harper has built his government and his career on information control and marketing. The nerd nobody liked is getting even; he now edits reality full-time.

Justin Trudeau has it absolutely right on the war in Iraq. He is not soft on terror. His critics — which include the painfully out-of-touch panel on CBC’s Power and Politics — are the ones who are soft-headed. Wars on nouns are notoriously unwinnable. Since 9/11, nearly twice as many people have been killed by anti-government fanatics than jihadists, according to the New York Times.

From Canada’s perspective, ISIS is what you call a manufactured threat. It is marketing to scare you into perpetuating a government that lives on fear and deception.

And as I would point out, what does a fear merchant do in Canada in the middle of our only too short summer? 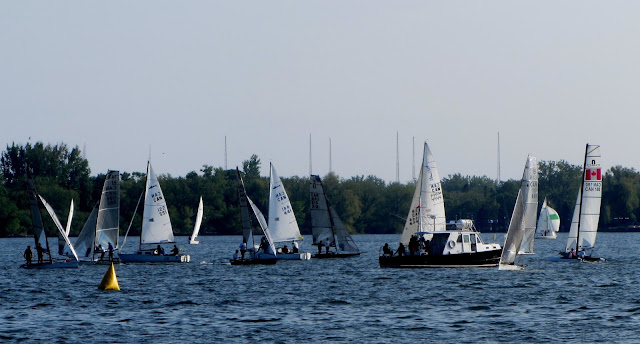 When the last thing the shattered survivors of Canadian winters want to do at this time is worry about terrorists, or for that matter listen to Stephen Harper.

Although I'm sure many of the many people who loathe him were willing to sacrifice a few precious summer minutes yesterday to watch this political show...

The Deaner, Harper's parliamentary secretary, on the way to the Big House.

And what with so many others who could soon join him.

And what with Nigel Wright getting ready to testify, and all those e-mails:

If those emails clearly show that the genesis of the repayment scenario was PMO-driven and known at the highest levels of the office, there will be no closet dark enough for the prime minister to hide in. If Nigel Wright’s testimony and the emails lead Canadians to believe that the PM actually knew about the deal, and then lied to Parliament, the merchant of marketing will be facing mission impossible.

It looks more like summer of scandal than a summer of war.

Which should just about demolish any chance he has of winning the next election.

And for using that disgusting terrorist propaganda for the lowest political purposes, one can only hope that at the end of this summer, after we've defeated him.

We can dress him up in ISIS orange.

And send him to the place he so rightfully belongs... 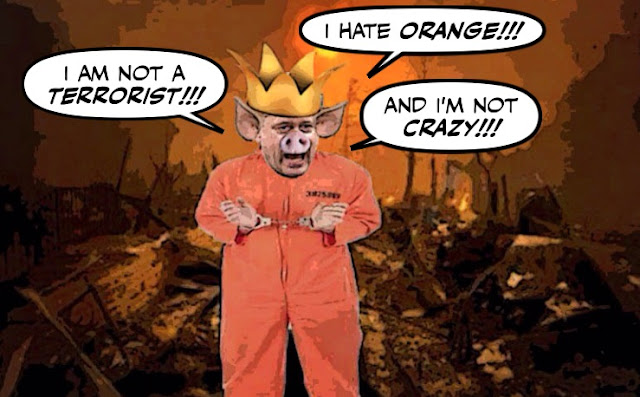 For there was never a worst Prime Minister.

Or a Canadian leader who stooped so low...

Trudeau has it right, stop bombing and spend the effort on improved training of Iraqi and Kurdish forces. At present the US appears to be trying to put a softer face on ISIS because defeating them would strengthen the shiite Iranian and Assad regimes.which now appear to be a bigger threat than the sunni led ISIS and Al Qaeda groups. Makes you wonder what insanity led us into this mess in the first place? But we all know that it was GW and his war on terrorism and altruistic desire to spread democracy to this part of the world. How can we blame little Stevie for following in big daddy's footsteps?
RT

ISIS videos are recruiting ads aimed at the type who will join. Public funds are now being used to move this advertising off a low viewership utube venue and onto prime time Canada wide tv screens.

Harper is flacking for ISIS and using your money.

The desperation is clearly shown in this ridiculous ad. The opposition needs to start their attack ads with the image of Dino in shackles as it will become ingrained in peoples minds and let them see how depraved this bunch of frauds and CON artists we have running this country.
JD

They just shut HarperPac down. Must have discovered that most Canadians do not like US style politics or they don't really need it as the Canadian TV networks are a better channel for Con biased stories. Last night CTV news reported that Trudeau would stop the bombing missions but failed to report that he would step up support training of ground forces. Perhaps some future bombing missions will be required to prevent massive troop movements but overall they are extremely negative as its unlikely that ISIS compounds have targets painted on them and are set up miles away from civilian infrastructure such a schools, hospitals, etc. Unfortunately, If ISIS has to be defeated instead of being used to diminish Iranian and Syrian power, ground troops that will have to do it. Hopefully it will be with well trained Kurdish and Iraqi soldiers and not Canadians as it will be a lethal fight.
RT

Saw old Dean, there and it perked me right up. They have so many fraudsters in the Con party, who can you really believe. How can you believe a P.M. who has so many members either having sex with teenagers, in jail for fraud, being investigated for fraud, getting out of jail for fraud, waiting for export to Canada to face fraud charges. Now Steve has his own version of what Trudeau and Mulcair are saying. Is it just another fraud? or is "great hide in the closet leader" having hearing and comprehension problems. Who knowns at this point, who cares, the guy isn't fit for office. He has all sorts of criminals around him, he thinks there is a terrorist behind every door, but doesn't care there are 1,200 murdered/missing First Nations women and won't build a road to a reserve which has had a bottled water order in effect for 18 yrs. Spending $90K a bomb in the middle east but no training or carbines for the RCMP. What type of a leader is this over the hill, idiot? Out of touch, crazy, bat shit crazy, delusional, a fraud? take your pick. I just want him gone.

Exactly! And recall GW saying he was a uniter, not a divider! Just like Stevie. 8-)

If we want to avoid having terrorists attacks made against us we should stop bombing over there. Every bomb that kills a civilian produces more ISIS fighters. We could stop training too and spend our resources doing humanitarian things. As many humanitarian things as we can. So many people are suffering over there that more war should not be encouraged. We might be able to help bring about peace if we are trusted.

hi anon...it is all insanity, and is fundamentally a religious war between the Sunni and the Shia. Unless those two branches of Islam can somehow reconcile, nothing we can ever do will stop that senseless slaughter. And yes, we are living with the consequences of the War on Iraq, which nobody should forget Harper was only to eager to involve us. George W Bush and Dick Cheney should have been tried for their war crimes along with Tony Blair and a few dozen others. Because what they have done to that whole region is almost beyond belief...

hi rumleyfips....yes that is without a doubt the most disgusting attack ad they have ever made, with the possible exception of the one about Chretien's facial paralysis. They should be ashamed of themselves, but as you know the Harper Cons are shameless. So all we can do is get rid of them before they disgrace themselves further...

hi JD...yes, it's important to remember the Cons wouldn't be doing any of this if they weren't desperate. And I for one intend to make the Deaner one of the stars of my attack ads,,, ;)

hi RT...the war can only be won when the Iraqi Sunnis who are relatively secular compared to others, can be persuaded to trust the Iraqi Shia, who took revenge on them after the fall of Saddam. Because if not the Iraqi army will be fighting in a desert and they will never beat ISIS....

hi e.a.f... yes I was glad to see Del Mastro go off to jail, although I really didn't think he should have had his legs shackled. I would like to see him taught a good lesson for his criminality and his arrogance. But I don't like to see anyone humiliated, with the exception of Stephen Harper. Who I would like to see towed around Ottawa in a cage, so people can throw peanuts at him... ;)

hi anon...I really don't know what to think. When I see some of the atrocities committed by ISIS, like the picture I saw the other day of a teenage boy being crucified for snacking during Ramadan, I feel like going over there and killing as many of them as I can. But of course that's NOT the way to go, and we can't let emotion dictate our foreign policy. And I also read that a recent wave of atrocities was triggered by the bombing campaign, so are we helping to save the lives of the innocent, or making their lives worse? Finally, I have always believed that Canada is best equipped to serve as a peacemaking force, and I too would prefer to see us concentrate on protecting and helping the armies of refugees whose plight is absolutely heartbreaking. Once we evict the foul Cons from office, we need to have a serious discussion about what kind of a country we want to be....

Simon, in case you haven't seen this, you really must watch this interview between Kory Teneycke and Tom Clark: http://globalnews.ca/news/2078347/does-the-conservatives-new-ad-contravene-their-own-anti-terror-law/ The full transcript is also on the page. KT dares to say that the CPC is more truthful than the news and then ducks and dodges when he's called out on that. Then, when asked if they would use any more terrorist videos, he just says 'wait and see'. Despicable on both counts.