How Stephen Harper Changed the Face of Canada 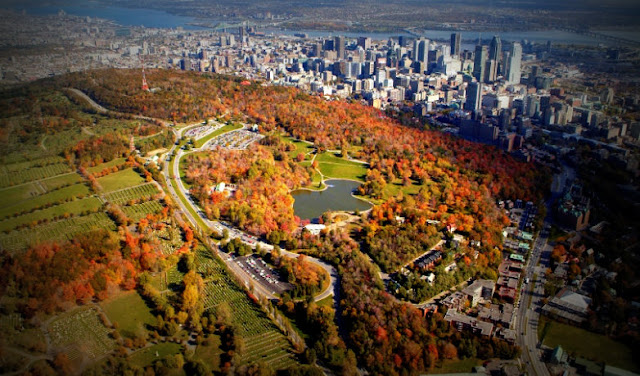 It still looks like the Canada I first saw on a glorious fall day long ago, through the window of a plane coming into land at Montreal airport.

As I bounced up and down in my seat with excitement, and looked down to see if I could spot any bears on Mount Royal.

A country so big and so beautiful, it took my breath away.

But sadly it isn't the same country. For as Carol Goar points out, Stephen Harper has altered it almost beyond recognition.

Who would have believed a decade ago that the census — the gold standard of national fact gathering — would become an election issue?

Who could have imagined the Canada Revenue Agency going on a witch-hunt for charities that oppose the policies of the governing party?

Who would have conceived of Ottawa sub-contracting the delivery of foreign aid to Canadian mining companies, long criticized for violating human rights abuses and fouling the environment of developing countries?

Who could indeed have imagined that he would destroy so much that was so good about this country? 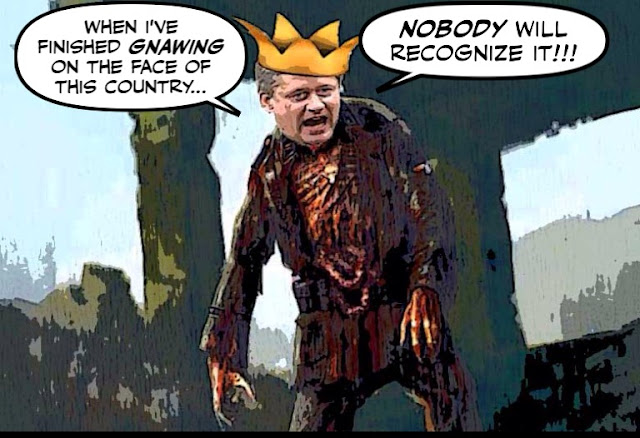 Demolish so many cherished institutions it had taken us years to build up, and rape our precious Canadian values so brutally.

Canada has metamorphosed from a middle power that championed international co-operation and led the world in the campaign to eliminate deadly landmines into a country that seeks to be known for its military might. The Tories equate diplomacy with weakness, negotiation with naïveté.

A nation that once took pride in its ability to integrate people of all origins into a peaceful, pluralistic society now glorifies pre-Confederation wars, elevates fallen soldiers to hero status and repatriates their bodies with tearful pageantry.

Who could have imagined that he would do such terrible damage? That even after him and his filthy depraved Con regime are finally defeated, it will take us YEARS to repair.

Some of Harper’s changes — the muzzling of federal employees, the withholding of public documents, the stifling of dissent, the marginalization of Parliament — can be undone. Others such as the dismantling of national institutions will be difficult and expensive to reverse.

You know shortly after reading Carol Goar's story, I read another story where the writer suggests it's time to cut the maple leaf flags off our backpacks.

And while that's probably a good idea, because Harper's bellicose policies and his big mouth have made us targets all over the world.

I don't think that writer understands what those little flags meant to me and so many others... 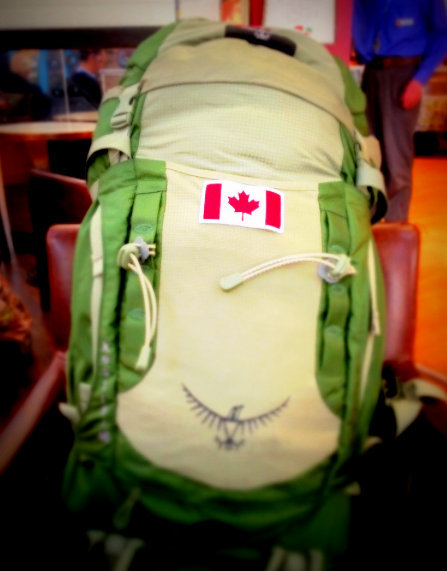 Because for me it was never a chauvinist symbol, or something to brag about, or set us apart from our neighbours. It was a message of friendship to all the people I met in my travels abroad.

It was my way of telling them that I may come from a giant country, but it's one that doesn't bully anyone. I wanted to let them know that we were peacemakers not warmongers. And that we wanted to work with them, to set a good example for others.

And in our humble but decent way help build a kinder, gentler, more equal world for everyone.

And you know what? That's STILL the Canada I believe in.

So although what has happened to it has made me very angry and very sad. And even made me wonder whether I should return to the country I came from.

Which is very small, very humble, but also very beautiful... 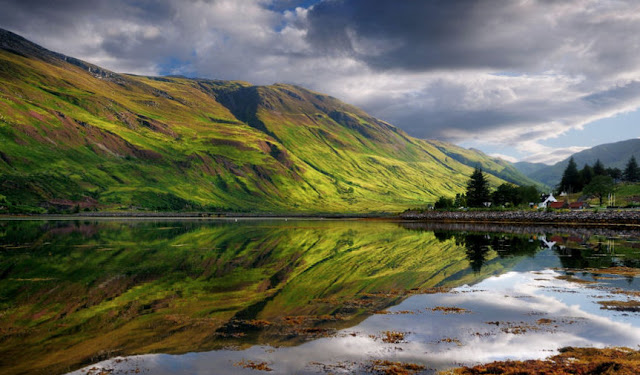 And where these days the rebel spirit in those mountains is very much alive, and hope flourishes. Unlike Harperland where for too many it goes to die.

But I'm never going to do that because this is my country now. I fell in love with it the moment I saw it. It really was love at first sight.

So what I am going to do is work harder than ever to take the Harper Cons off our backs.

I want to defeat them, crush them beyond recognition, make them pay for what they have done.

And I am going to get my Canada back... 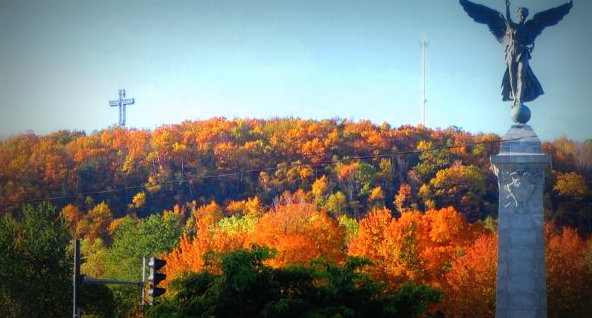 You know it's funny. It was a bitter disappointment to discover that there were in fact no bears on Mount Royal, the first place I saw through that plane window.

But that's where I met Sébastien, the awesome Prince of the Saguenay, who is now my companion.

Yup. There are now 111 days to go before the election.

Let's use revenge to motivate us.

And make every day count...

The problem with politics is its easy to be a Harper and hard to be a Trudeau. Moving people backwards is easy, forwards takes leadership. The flag on the backpack is a good example. Now that Canada is seen abroad as a war mongering nation our citzens are no longer safe to travel with stickers on the backpack.

On the other hand, while everyone else is celebrating comming out of the closet, Harper is making it his home.
<a href="http://thinkingaboot.blogspot.ca/2015/06/the-confederate-flag-moves-to-it-while.html:>Times change </a>harder than one mans fantasy.

This level of monstrous stupidity had always been sitting there in the hearts and minds of the right-wing demographic. Who knows why it's been awakened? But it certainly serves elites. They've brought their Rush Limbaugh, Sheriff Arpaio vileness north of the border, giving us the careers of Ezra Levant, Rob Ford and stephen harper.

How do we stop it?

The odd thing with the census is that is just as important for business as it is for social programmes. I'm sure there are some businesspeople who are fed up with the obscurantist side of Harper's policies.

That photo of Mont-Royal is beautiful, but I'm not looking forward to autumn, now that we have several of the fresh summer vegetables here at Marché Jean-Talon.

A piece by Mulcair in the ghastly Sun, of all places. I copied the article elsewhere so as not to read the sunnish comments: http://www.torontosun.com/2015/06/28/cities-key-to-middle-class-jobs

Much easier to inflict damage than to repair. You can destroy a lot with very little, but that destruction is huge, costly, and perhaps impossible to fix.

Harper has done the equivalent of the German's Blitz on England, so much destruction in so little time, and from which we will unlikely rebuild but only transform into something different. If he has not killed Canada, he has given in a mortal wound.

hi Steve....yes it is easier to be a Harper than it is to be a Trudeau. Harper spends most of his time just catering to his base, and using one wedge issue after another to try to add another ten percent to his fold, which was enough to give him a majority last time. And of course he has no moral scruples so he is free to do anything. While Justin who is constrained by scruples, is trying to find a middle ground, and in this country at this time that's not easy. But yes, with Harper spouting off wearing a Maple leaf on your back in many places these days, is like fixing a target on your back. It will take many years of patient work before we can do that again...

hi thwap....I think we stop it by both attacking the Cons in the most devastating manner, while offering a shining vision of something better. And if we do that I think the desire for change will overwhelm everything else....

hi lagatta...I always knew the Cons were grotesque ideologues, but when they gutted the census, and could offer no sane reason, I knew that it could only have come from the Straussian mind of Stephen Harper, who believes that knowledge is for the elites, and that the masses should be kept ignorant. And that we ad entered a whole new stage that couldn't be more insane or more dangerous. As for Mount Royal I lived for a while in the McGill student residences at the top of University street, so the mountain was on my doorstep. And I enjoyed it in all seasons, whizzing down from Mount Royal to the residences on my snowboard, or biking up to the chalet and Beaver Lake But mid July, when the tam tams are beating in the evening was my favourite time, and it was absolutely magical....