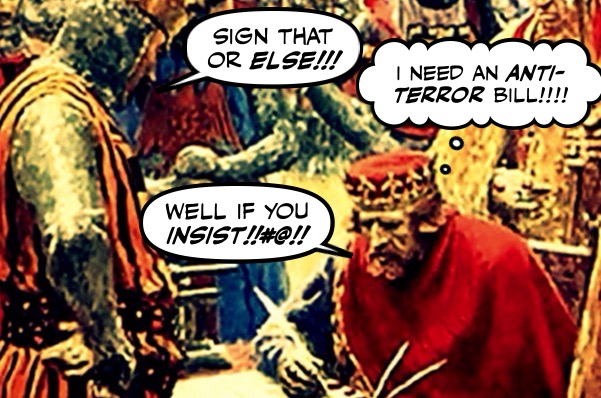 Yesterday was the 800th anniversary of the day King John reluctantly signed the Magna Carta, the document that was the foundation of our parliamentary democracy, and the rule of law.

And most importantly declared that nobody was above the law, not even the king.

So it's ironic that few people have celebrated that anniversary more than Jason Kenney.

Even though we are now ruled by his mad king, who has placed himself above the law over and over again. And has made a mockery of our democracy. 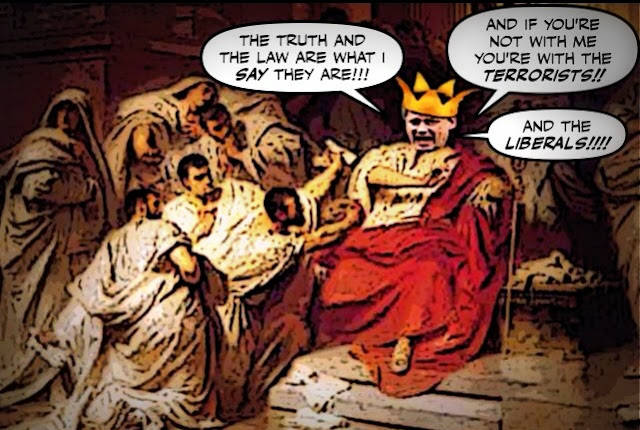 And what this country desperately needs, as Errol Mendes points out, is a Magna Carta moment.

In the actions of the Harper government we see all too many instances of powerful people trying to set themselves above the law. How else can one read an attempt by the government to hide inside a massive omnibus budget bill a law that would retroactively invalidate an investigation into unlawful conduct by the RCMP — an attempt to re-write the application of the law in the past?

When a government elected on a promise of accountability and transparency works to undermine every independent officer of Parliament charged with keeping the government open and transparent (the nuclear safety commissioner, the parliamentary budget officer, the chief military police complaints commissioner, the acting privacy commissioner and, most recently, the correctional investigator), is it exercising power on the people’s behalf, or merely to trash its enemies and settle scores?

For Stephen Harper's assault on our democracy is without precedent, and the list of his democratic atrocities is so long and so foul it's almost beyond belief.

As a new report called Dismantling Democracy, which is being released today by the non-partisan coalition Voices-Voix, makes only too clear.

It has been brutish, boorish, and in the case of his recent decision to rewrite history for crass political purposes, couldn't be more contemptuous or abhorrent. 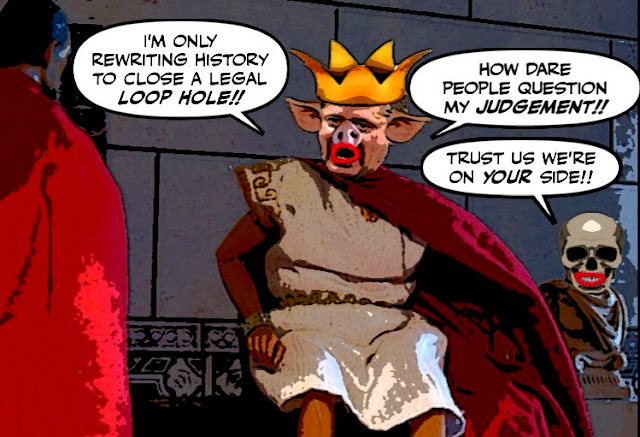 When is a constitutionally protected right in Canada not a right after all? When Prime Minister Stephen Harper’s government says so, it appears.

The “law-and-order” Conservatives have just set an appalling precedent by using Bill C-59, the budget bill, to retroactively erase citizens’ Access to Information rights and to protect the Royal Canadian Mounted Police in connection with the now-defunct long-gun registry, one of the government’s pet hates.

This casual assault on the rule of law is unprecedented, and abhorrent.

And Mendes is right, if Harper and his Cons are allowed to get away with calling that action merely "closing a legal loop hole" our bleeding democracy could be fatally damaged.

When a government’s abuse of power is laughed off as a “loophole”, a mere detail, we’re watching the foundations being laid for arbitrary government — for government operating outside the rule of law. The kind of government the Magna Carta was supposed to free us from.

The Magna Carta is the foundation of the British parliamentary system and, through that system’s legacy, of free societies around the world. In Canada, in 2015, we’re seeing that foundation being torn down, brick by brick.

And yes, after looking on so helplessly or so passively for so long, as Stephen Harper demolished our democracy and our values, we really do need a Magna Carta moment.

A moment when we finally say enough is ENOUGH.

Which is why I've always argued that progressives need to view the next election as more than just another election.

If we want to motivate as many Canadians as possible to turn out and vote, we need to turn it into a sacred crusade or movement to take back our country and restore the rule of law. 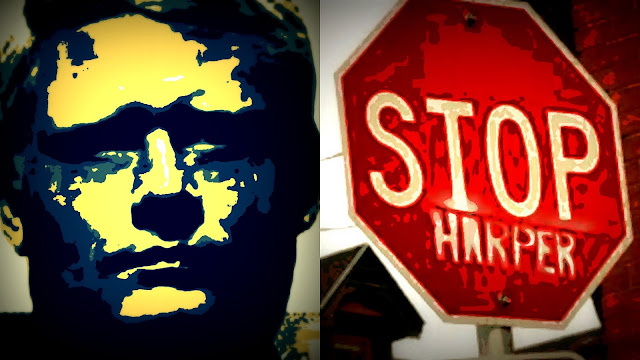 And of course, stop the tyrant.

Before we wake up some morning, and find ourselves living in a police state, in a Canada we don't recognize.

We need to put our country before our parties, and unite to defeat the Con regime, instead of fighting each other.

So we can make sure we crush them.

And are able to send our mad king a message he can't rewrite, or ignore... 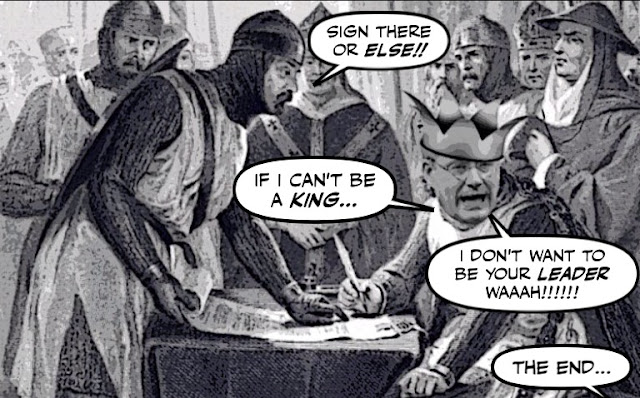 His rule of terror is over.

Enough IS enough. His time has passed.

Access to my private information, about what I own violates *my* basic right to privacy. Your basic right does not extend to that invasion of my personal life.

Mad King Harper is acting on orders above him from the wealthiest In Canada and the World. They think they are above the law too.

Notice how their bombing arm NATO goes and destroys countries that have their own Central Banks Free Education and State Run Infrastructure? These hungry for power boorish bastards want to control the entire Planet then cull the human race to 500,000,000.00. That is why they want to privatize every thing food water roof over your head goods and services etc so they can take it way from anybody a will.

I am beginning to think they are not from Earth and want to steal our planet because she is so beautiful. Then keep half-a-million of us around for slaves. Why are they so alien and cruel to real people and why are they so cold-blooded?

Retroactively changing a law is absurdity extreme and will lead to another Supreme Court smackdown on this ridiculous bill. Stevie will be left to warble out Cher's hit single "If I Can Turn Back Time" at his next "concert".
JD

Yes, I'm sure Jason realized the King was not above the law but we are speaking of his Lord harper, just next to god or some such junk.

This is no longer a true democracy. Harper uses his majority in Parliament to achieve his goals. Sort of like the current Egyptian government. I still would not be surprised if he changed the date of the election and didn't hold one. I am not kidding. he could do it and if the polls suggest he will not win, at all, he just might do it. Like who is going to stop him, really, who would stop him? The RCMP is simply arm of the PMO these days. the General who runs the armed forces things rape, harassment, etc. is simply a matter of "wiring". the GG is one of harper's annointments. So who would stop harper. he really isn't any different from Putin, that much I have concluded.

hi anon....No I am not a liar, and your are an idiot. This case has nothing to do with the gun registry that would have been destroyed if the RCMP had waited a few weeks or not. This is about a police force that deliberately broke the law, and about a Prime Minister who counselled them to commit an illegal act, and then rewrote the laws that existed at the time to protect the police and himself. So write that down ,and paste that on the fridge, so you can read it fifty times a day when you reach for another beer. And let me leave you with this question: how would you like a progressive government to rewrite laws with the police to use against YOU? Oh, you hadn't thought of that. Wake up you fool....

hi Mogs....I don't know what hellish planet they came from, but they have indeed always acted like aliens. Aliens to our traditions and values, and wherever that planet is we must definitely insist they call home, and ask them to come and get them...

hi JD....yes it will no doubt lead to another Supreme Court challenge. But if you notice just about everything they do seems to be designed to pit themselves against the court. So it looks like that is going to be a big plank in their platform, and it couldn't be more disgusting....

hi.e.a.f...I have no idea why Kenney is so excited about the Magna Carta, but he has been tweeting about the anniversary for MONTHS. And as I pointed out in this post, it couldn't be more ironic or hypocritical. But I did notice one thing, Kenney may have fired off dozens of tweets, but his Great Leader failed to even fire off one to mark the anniversary. I wonder why?