The Mohawk Institute and the Disturbing Silence of Stephen Harper 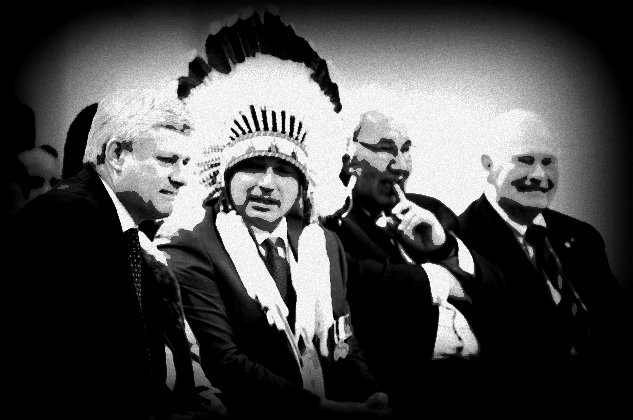 After following Stephen Harper's bestial political career for so long, I didn't think anything he did could shock me.

But I must admit I was stunned by his strange silence at the closing ceremony of the Truth and Reconciliation Commission.

I wondered why a Canadian Prime Minister wouldn't say something, anything, to mark the significance of the moment.

Or recognize the pain and suffering of so many. Or all the horror stories like this one. 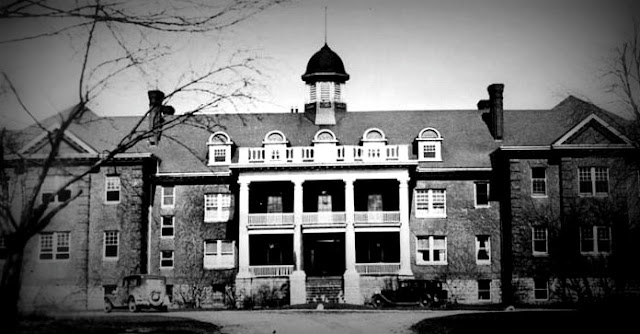 The story of what happened to Russell Moses in a hellish place called the Mohawk Institute.

The Mohawk Institute, referred to by the children as “the Mush hole,” was a dark and horrible place, the stuff of children’s nightmares. Food, as described by the Moses letter, was “minimal in quantity and appalling in quality.”

Moses laments in his letter that he had seen “Indian children eating from the swill barrel, picking out soggy bits of food intended for the pigs.”

Robbed of their names, forbidden to speak their languages (severe beatings would follow any use of traditional language), subjected to harsh physical punishment and deprived of love, the children suffered enormously. 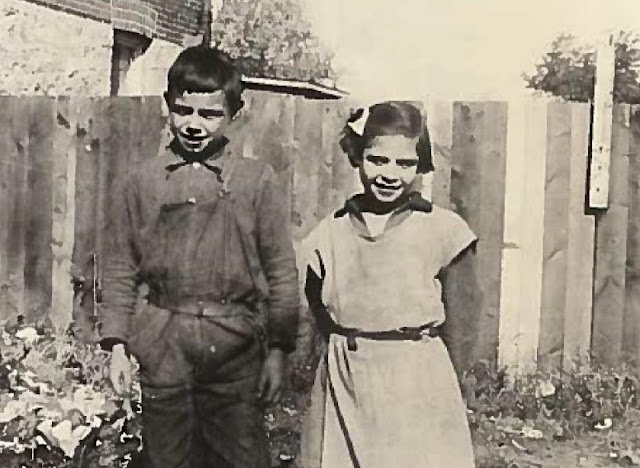 And which was by any standard of human decency, nothing but a concentration camp for children.

So why would Harper remain so silent about such a tragic episode in Canadian history? Why wouldn't he say something to acknowledge the pain and suffering, and reach out to the survivors. No matter how hollow his words might be.

And I can only think, like Karl Neremberg does, that's it's because his silence is like a dog whistle to his ghastly racist base.

The reason Harper and his government have adopted this grin-and-bear-it attitude toward the TRC is that they hear other voices than those that have flooded the media this week. The Conservative leader is acutely aware that many of his party's "base" have views quite at variance with the "politically correct" consensus.

The kind of people who gave been flooding the comment section of newspapers or websites with comments like these:

"You don't think the taxpayer pours enough tax money into Indian Affairs? Geez. Time for them to go back to the tee-pee, out of our sight !!

"Stop being a blood sucking parasite. The world does not owe you a living because you were here first... and there is some question about that …"

And when I think that Harper is pandering to those kind of people I am even more convinced that he is unfit to be a Canadian Prime Minister... 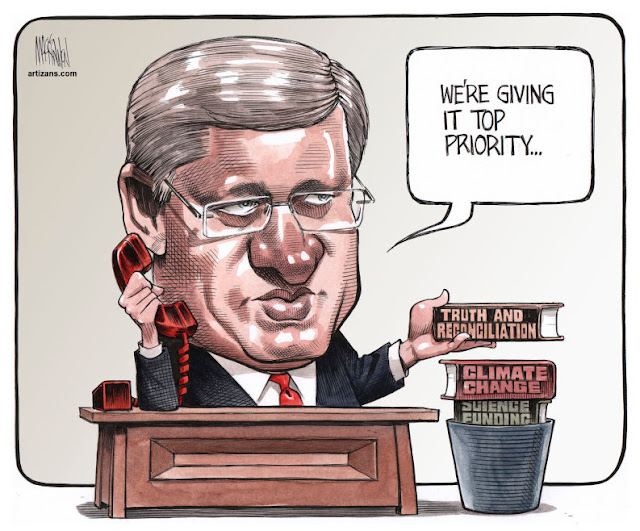 And the more I like Don Martin's idea. Why don't we scrap plans for the monstrous  monument to himself Harper is building in the heart of Ottawa?

The so-called Memorial to the Victims of Communism... 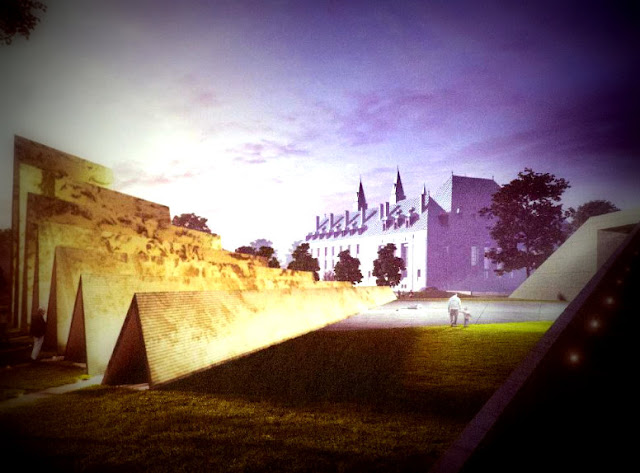 And turn the site into another kind of memorial.

Prime Minister Stephen Harper should dedicate the site to the victims and survivors of Canada’s residential schools.

The Truth and Reconciliation Commission suggests a national holiday and memorials in major cities. But what’s needed is a national focal point to reconcile the ugliest truth of our history in a hugely symbolic, yet tangibly concrete way.

Because that would indeed be a grand gesture, and a way of finally acknowledging our history. One that would hopefully also celebrate the existence of our aboriginal peoples, their culture, and their survival.

One that would mark the moment when a Harper-free Canada could begin to write a new and better chapter in the history of this still young country.

And the ghosts of those poor children might rest in peace at last... 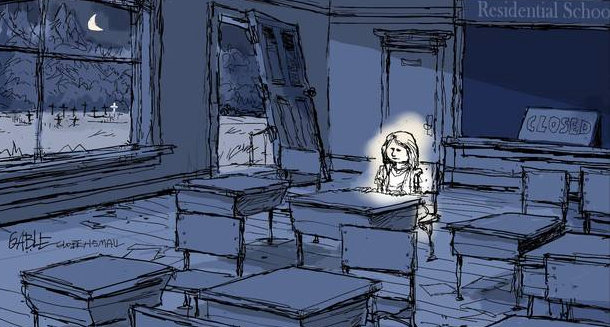 I don't 'get' this Memorial to the Victims of Communism........would someone out there please explain this to me?

You mean the monument that is a big chunk of concrete that looks like Soviet Russia's monuments. totalitarians think alike. They find concrete powerful.

This is Harper telling his base that Mulcare and Trudeau are communists. A multi million dollar dog whistle you pay for to scare his base out to vote.

The land in Ottawa was originally slated to be the location of a new Supreme court site named after Pierre Trudeau. To understand the relevance of building an anti-Communist memorial read about Canada Russian relations on this relatively short article http://en.wikipedia.org/wiki/Canada–Soviet_Union_relations with particular reference to Trudeau's 1971 visit.

It is being built in spite of Harper's childhood demon.

Don Martin's idea is a winner, but will go nowhere if we try to change the Conservative's minds about the monument. But the overwhelming opposition to it gives the Canadian people a great opportunity to take over the scheme. Just stop referring to it as a Monument to the Victims of Communism. If everyone--bloggers, commentators, media people, politicians, all of us in everyday conversations--start calling it The Monument to the Victims of Residential Schools, the Conservatives will have lost it.

What would Steve have said? Really what could he have said? He doesn't care about the First Nations, that is easy enough to conclude. We see on the CBC news site he withheld $1B over 5 yrs, which ought to have been used for health, housing, water, education. He says an inquiry in the 1,200 missing/murdered First Nations women isn't on his "radar" and then doesn't put any money into a cold case squad. .

We know John Duncan refused to sign off on 16 new homes for Apawaskat, after the Cons lost their court case to them. the medical clinics in the north are dreadful and there are reports staff isn't up to standard. The list goes on and on and its all been on Harper's watch these past 10 yrs. There was nothing for Harper to say because the only thing he could have said, I will fix this. He has no plans to fix anything when it comes to First Nations people so he did the only thing he could, he kept his mouth shut. First Nations people are not on Stephen Harper's radar. If they were, he would have established a cold case squad to find out who murdered the 1,200 First Nation women. He could have ensured that all bands had a clean water supply and sewage system. He could have ensured each community had a decent medical station with adequately trained staff. The list could go on for a long time about what Steve could have done, but Steve prefers to spend my tax dollars killing people in the middle east instead of helping my fellow citizens have a decent standard of living.

Hi WILLY...thanks for that, it is pretty clear that it is yet another way for Harper to get back at Trudeau and offend our justice system. And Kathleen what you should also know is that the Cons have coughed up $5 million for that ghastly project, as well as giving the builders the land which is worth an estimated $16 million....

hi anon....yes quite apart from the fact it shouldn't be there, it really is a monstrosity, and it couldn't be more totalitarian. If they ever start building it, I hope the new progressive government will hold a contest to see who gets to drive the bulldozer that demolishes it....;)

hi rumleyfips...yes that's no doubt part of the scam, as well as pandering to yet another ethnic group. It's the ugliest thing I've ever seen, and it should never be built in such a location. I am glad to see though that the Ottawa council has voted against it, so hopefully they can hold it up until a progressive government is installed...

hi Editor...well I'm all for that idea,and I can't even bring myself to mention its name. Until Martin suggested that, I'd been calling it the Memorial to the Victims of Harperism...

hi e.a.f...the treatment of our native people has been so shabby, it makes me ashamed to be a Canadian. Surely we can come up with a plan to help them, and stop thinking that money alone can cure that open wound. With more humanity and imagination we could do great things....

The article Willy quotes has a severe fallacy it claims the Soviets were aiding and abetting the North Koreans in the Korean war. Um it was Red China they even had soldiers on the ground there. Wave after wave which is why the war ended in a stalemate and hence the separation of North and South Korea. The Soviet Union may have helped with arms shipments or so but to the best of my knowledge never set foot in that theater of war. The Red Chinese however did:

The Americans proved to be nitwits in that war. I remember seeing on a History Channel documentary about that war. The Americans used to sleep at night out in the open in sleeping bags. So when the Red Chinese waves of soldiers arrived they were sitting ducks. The Canadians on the other hand first thing they would do is dig trenches. They were not so vulnerable the Red Chinese used surprise attacks as the articles document.

Also there was this they interviewed Canadian fighter pilots who were shot out of the air by American fighter pilots over North Korea. They ended up in POW camps for the remainder of the war. When the war ended and a truce was made a prisoner exchange took place. The Canadian pilots got debriefed by their American so-called allies. They were told you can never ever tell the truth about your "friendly fire" you must swear to secrecy or we will let the North Koreans keep you and you will never see your family back home in Canada. Do you understand me son have I made myself clear.

Can you imagine first you get liberated then you get told if you open your mouth about the truth you will never go home again?

There is absolutely no reason to believe that the Harpercons will do the decent thing. His hollow apology was nothing more than a photo op that is now being touted by him and his cohorts as a sign of his caring. While the Cons claim that they have invested millions of dollars in support of First Nations, we see that they have actually withheld much of it. What is happening to the trust fund set up years ago for First Nations people? Have the Cons dipped into it?

Thanks for the idea that his silence is a "Dog whistle" to his base. But to the rest of us it is a deafening call to defeat him at the next election.