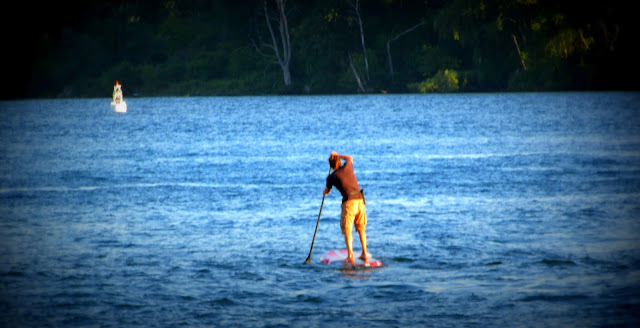 Summer is finally here, and I couldn't be happier. Not just because I live for this season when everything comes alive.

But also because I know that when this one dies, in the land where summers are so short, so will Stephen Harper's deathly Con regime.

But what I also know, and all progressives need to understand, is that the last part of our long journey to freedom will be fraught with danger.

Because we are now entering the perilous waters of vote splitting. And we could still snatch defeat from the jaws of victory.

Just a glance at the latest EKOS poll shows where we could be heading. 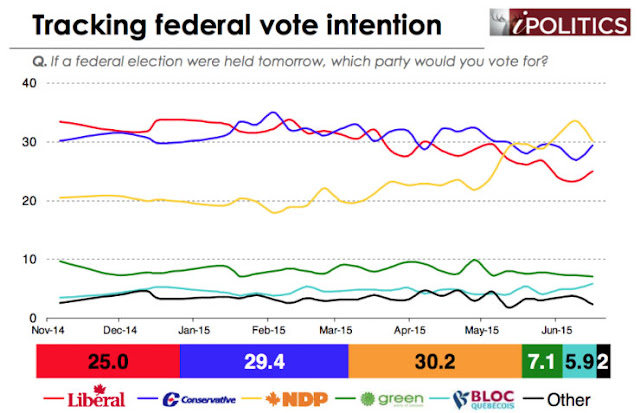 The NDP continues to hold on to an insignificant lead, but they have been brought back to Earth by the return of Gilles Duceppe in Quebec and a mild revival of Liberal and Conservative numbers.

The brief ascent of the NDP in Ontario has halted and the Conservatives now have a slight lead, with the NDP and Liberals tightly bunched at 30 and 27 points respectively. This is a potentially major development in favour of the Conservatives, who — if these numbers persist — could now win many more seats with slender pluralities due to vote-splitting on the center-left.

Heading into a zone, or a Bermuda Triangle, where vote-splitting could cause us to defeat ourselves.

Now I'm not worried about the sudden revival of the Bloc Québécois.

I'm pretty sure it's just an emotional reaction to the election of a new PQ leader, the death of Jacques Parizeau, and the return of Gilles Duceppe.

And that it will almost certainly fade when most of its supporters realize, as they did last time, that voting for the Bloc is not the best way to defeat Stephen Harper. And that trying to revive the independence project at this time, is like planting flowers in a desert.

But what seems obvious to me is that one of these two leaders will have to gain a decisive advantage over the other, if a catastrophic split is to be avoided. 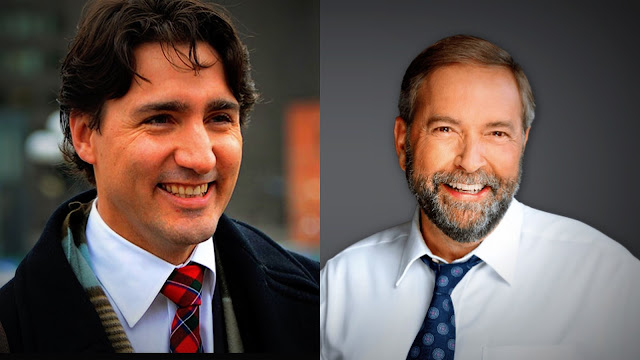 Liberal Leader Justin Trudeau is about to discover how difficult it can be to regain political momentum once you’ve lost it.

NDP Leader Tom Mulcair will learn it is often easier to claw your way to the top of the political heap than it is to stay there.

If by Labour Day, the two have settled into a familiar pattern of splitting the anti-Harper, so-called “progressive” vote, that equilibrium will likely lead to the re-election of the Conservatives.

And what is also true is that progressives will eventually have to support one or the other decisively, if the Cons are to be prevented from sneaking up the middle, in riding after riding.

And that also means that if the equilibrium is to be broken, some supporters of one party will have to vote for the other.

Which won't be easy, because our divisions and our blind partisanship, have always been our greatest enemy... 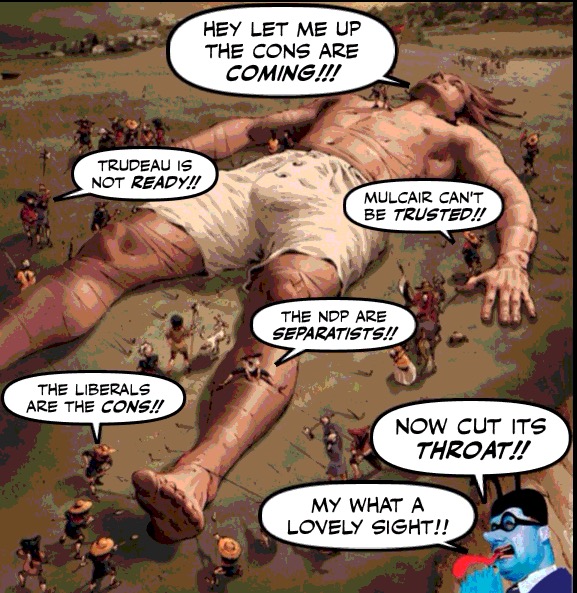 For what else could explain that although seventy percent of Canadians don't support Harper and his foul regime, our country lies in a pool of blood savaged by the bestiality of a Con majority?

If that's not idiocy, it's madness.

And the good news? I'm pretty sure that when the time comes most progressives will do the right thing, put their country before their party, and support the leader and the party polls show is best able to defeat the Cons.

And since both the NDP and the Liberals now support some form of proportional representation, it's only a matter of time before we will finally be able to overcome our disadvantage, make the Cons almost unelectable, even banish them from power for a generation.

And our long journey to freedom will be complete... 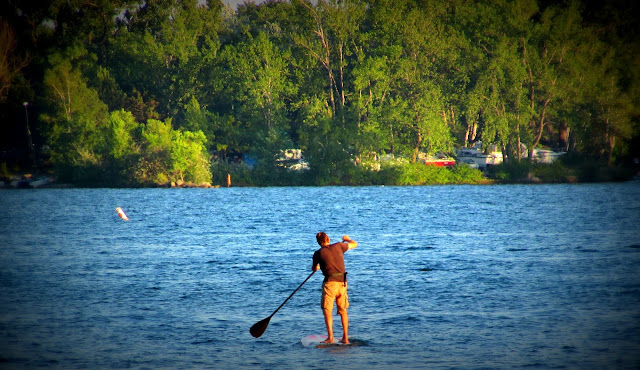 So while we are in perilous waters, and we will have to paddle like hell, the reward for all that effort couldn't be greater.

Let's celebrate that after this long nightmare our Canada is finally in sight again. Let's remember that the best people in this country are with us.

And rather than killing each other.

Let's save our anger for the monster Harperman.

And sing this song together...

Oh boy, do I love that song.

I think I'm going to be humming it all the way to the election eh?

Have a great summer everybody !!!

The mainstream media is frothing for a Justin vs Tom cat fight. So far both sides are saving their powder for the enemy.

Brillant song, I wonder where all the protest singers went, to Church I guess.

I watched political programs yesterday. All the time spent critiquing Mulcair or Trudeau's policies and words.. Not one single world critiquing Harper. Are they all campaigning for him? Stockholm syndrome? CBC, CTV Global - all the same.

Living your politics through polls is an exercise in masochism...they go up and down like yo-yos and various polls lately have been beyond wrong, and in the final analysis it's better for your psyche and heart not to get too hung up on what the polls have to say...it's like being bi-polar, too many way ups and way downs to not get depressed..
I'm keeping my powder dry and ignoring the polls for at least this long hot summer..so much can, and will happen between now and the next election that it's hardly worth getting your heart rate up over it

yes, it does look dangerous. The paddle boarder does not appear to be wearing a life jacket and is trying to get to the light house. that may explain the political situation in Canada today.

People know Harper's record. If he is re-elected then people will get what they deserve, a $30 billion reduction in health care funding in 2017. there are a lot of reasons the Cons need to be ejected from office, because of what they have done in the past, but voters need to look to the future also. A $30 billion reduction in health transfer payments in 2017 will gut provincial health care plans. For all those who think Steve and his Cons have been doing a great job, well think what your health care will be like after that money comes out of the budget in your province. Think you can buy extended private health care, sure, if you don't have a previous existing condition. For a majority over 50, that isn't going to happen, so welcome to the new reality of harper and his cons. American style health care prior to the ACA

The best way to avoid the problem of potential vote splitting is to go to the polls in great numbers.

After all, it is total votes that counts.

If more Liberals or Dippers come out to vote in every riding than do Conservative voters, then the split doesn't matter.

Bring a friend or 2 with you to the polls. Preferably Progressive-minded friends who did not vote last time around.

hi Steve...unfortunately the way the system is setup the NDP and the Liberals are probably going to spend most of the summer attacking each other. And let's just hope the don't cripple themselves. As for me, I've always believed that they should try to impress progressives with their ideas and their policies, and save their vitriol for the Cons...

hi anon...I'm glad you like it. There are quite a few good anti-Harper songs out there, but that one has to be one of the best. I've already learned to play it on my guitar. Now all I've got to do is memorize all those words... ;)

hi anon...yes I've noticed that. It may just be that since both Mulcair and Trudeau have started releasing their policies the MSM feels obligated to critique them. But over the last ten years they have not done enough to criticize the foul record of the Cons, so I'm not impressed...

hi mizadarlin...it's true that the Canadian electorate is extremely volatile, and not fully engaged it being summer and all. And it's also true that this latest Ekos poll seems a little strange. For what can explain that last week the NDP had opened up quite a lead in Ontario and this week the Cons are back on top?But I still think that monitoring the general trend is useful, for over time they can give you a good idea of what works and doesn't. And as I said in my post, they can serve to warn us about the dangers of splitting the vote...

hi Mogs....I know that John Roby song well, and it is also one of the best. I've played it on my blog at least three times, and I definitely will play it again...

hi e.a.f...yes I suppose it is a bit dangerous. One really should wear a life jacket. Especially since there are boats in the bay that can cause quite a wake. And just last week a guy fell off a party boat, and although he was a certified life guard only lasted a few minutes before disappearing below the surface. But us water boys are pretty good on our feet, and there are always others around to rescue us.
But as for the medicare question, I'm making that one of my priorities in the campaign. For as Tom Walkom pointed out the other day, although its a big issue for Canadians, our politicians spend hardly any time discussing it...

hi Eager Beaver...yes you're right, turnout is the key. And if we swamp the polls with our voters it should help us overcome most of our disadvantage. Still, what is fear is that blind partisanship could cause some progressives to vote for their party in a riding they can't win, and that could deprive the other party of the votes it needs to beat the Cons. But then I'm biased, I live for the day when progressives are united...

If the Ekos polls only contact those with land lines, how accurate are they? How many people under 30 have a land line? Then again, most people under 30 don't vote. Sad. They have the power to destroy the Cons