Truth, Reconciliation, and the Shame of the Con Regime 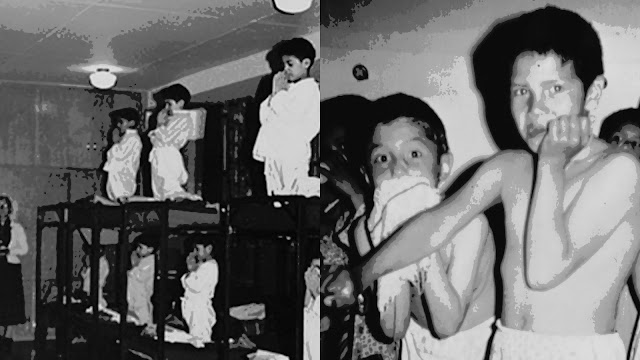 They are images that should haunt every Canadian. Native children taken away from the parents by the RCMP and sent to residential schools with more cemeteries than playgrounds.

And even though our generation wasn't to blame for that story of brutality and attempted cultural genocide, we can't look away or ignore the problem.

Because it is still an open wound that needs healing.

And as the Globe points out, it was, it is, and it will always be our story. Canada's story.

Close your eyes and imagine you are at home with your two children, a boy aged six and a girl aged eight. There’s a knock at the door. It’s a moment you’ve dreaded for weeks. You answer it and there is a man from the government and an RCMP officer who order you to turn your children over to them immediately.

It's a story that couldn't be more painful.

That night, you are alone with your spouse in an empty house, brokenhearted, powerless and without hope, everything that matters stolen by the state. 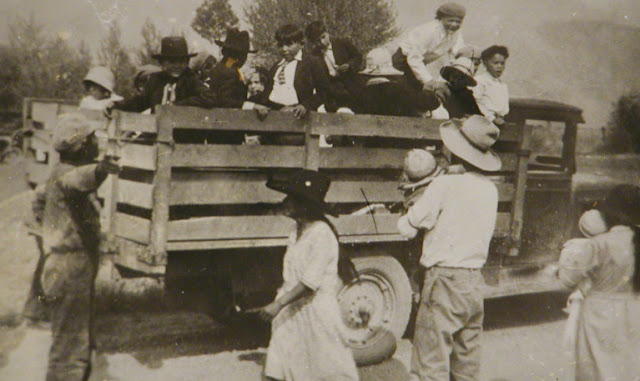 Now imagine you are one of the children. You are driven hundreds of kilometres to a new school run by strangers. When you arrive, your hair is cut off and the clothes your mother made you are taken from you and burned. You are punished every time you speak your mother tongue or cry for your parents.

You are underfed, cold. There is no playground outside, just a cemetery for the children who died in the care of this horrible place.

No country could run away from a story like that one. And to blame its victims is both ignorant and obscene.

A poll in 2013 showed that 60 per cent of Canadians believe that First Nations, Inuit and Métis people are the authors of their own problems.

Not when racism is still a big problem in Canada.

So now is the time for action not more empty promises, or more indifference. 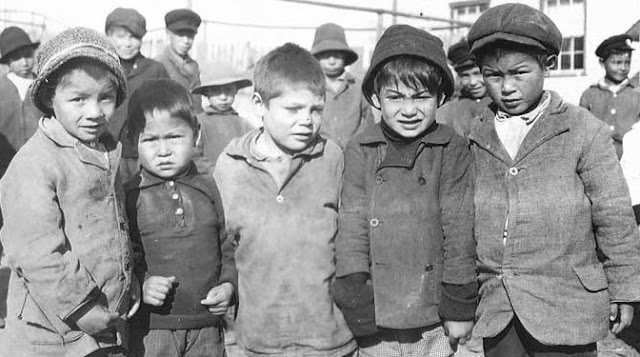 This country needs to be shaken out of its indifference. It needs to acknowledge a dark history that Canada authored. Canadians must consider how to remedy the harm that we – Canadians – caused.

And what must also be said is that we will never arrive at that moment of reconciliation, and our precious native people will never have a better future, as long as Stephen Harper is Prime Minister.

Prime Minister Stephen Harper spent much of Tuesday's question period defending his government's work on aboriginal affairs as the opposition challenged him on the results of the Truth and Reconciliation Commission's findings. But Harper wouldn't commit to any of the 94 recommendations outlined in the summary report, released Tuesday morning.

Because he would rather cater to the racism of his rabid base, he doesn't give a damn about the poorest and most vulnerable Canadians.

And would spend a billion dollars on his porky propaganda, but not a penny on an inquiry into this modern aboriginal horror story. 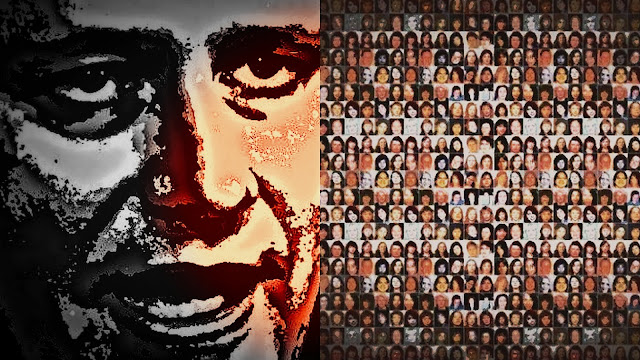 And the reaction of his Indian Affairs Minister Bernard Valcourt, when the head of the Commission said we do need an inquiry into those missing and murdered women.

Says all we need to know about his foul Con regime...

You know when I was boy and living in another country, I used to think of Canada as a land of mountains, bears, Mounties, hockey players, cowboys, and Indians.

If I had been asked to choose which of those things I thought made Canada sound most interesting, and a place I'd like to live in, I would have said native people.

And I've never changed my opinion. Their history, their culture, have have helped make Canada Canada. And in my eyes more interesting and beautiful.

So let's get rid of that ghastly Con regime, and work for that glorious day of reconciliation.

Let's confront our history, not try to bury it. Let's embrace our precious native people, not reject them... 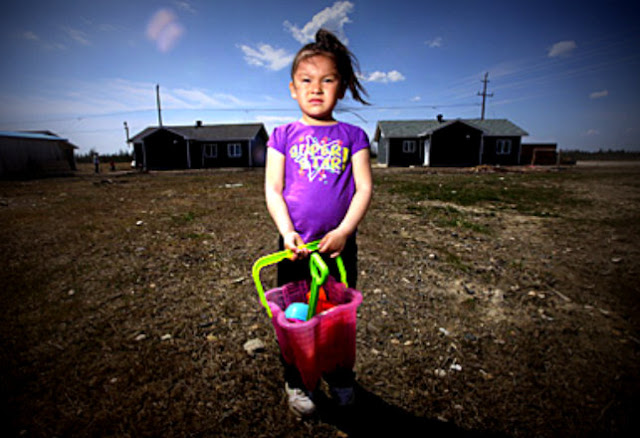 Let's give this tragic Canadian story, our story, the happy ending it so desperately needs...

.. Valcourt remaining seated on his loyal Harper ass.. perfectly eloquent & symbolic
A venemous revelation of The Harper Government's 'stance' ..
He may as well of sat on his hands or turned his back and left
It was a moment of and message of contempt
as without doubt Valcourt's actions
were discussed in advance
& likely dictated

The genocide never stopped...it is simply verboten to mention it by heil harper and his ss wannabes, the royal conservative mounted police.
Resistance is futile!

First Nations People are being targeted even more now so Big Oil and Big Mining Corporations can make BIG PROFITS! Plain as the nose on your face!

Man's GREED will eventually destroy us all!

He cannot allow a rise in the stature of native people and has even spent considerable resources shifting the emphasis in national museums to down play their importance. The reasons are because of his fundamentalist views as well as its more difficult for a marginalized group to have any claim (or voice) over the governance of lands that are an integral part of his oily dream.

Harper has done nothing to improve the lives of First Nations people since he came to office. We can remember Appawaskat and the lack of adequate housing. what was the Cons response. Then Indian Affairs minister, John Duncan, refused to sign documents to provide for 16 new homes the day after the band won the court case.

When asked about a national inquiry into the murder of 1,200 First Nations women, It wasn't on Steve's "radar". Two white men are killed by mentally unstable gun men and we have Bill C-51. We have several hundred murderers walking around free and clear and that is o.k. with Steve. Well its not o.k. with me. He truly doesn't care. If he genuinely thought an inquiry wouldn't solve the problem, then why did he not OPEN A COLD CASE SQUAD TO LOOK AT THE MURDERS. He didn't do it. That tells me all I need to know about his attitude towards women. WOMEN DON'T COUNT in Steve's world. Because if one woman doesn't count, eventually we all don't count.

We are still seeing people put on trial for crimes against humanity 70 years after the end of WW II. I'd like to know when the trial will start in Canada for crimes against humanity. What went on in Canada wasn't any different than what went on in the Holocaust. They rounded up the children, put them in camps, conducted experiements on them, they weren't adequately feed, housed, they were abused, used as sex slaves in some cases. Now someone tell me that this is any different from the Holocaust.

The Canadian genocide of First Nations people was targeted at children. How disgusting. it hasn't stopped to this day. Want to have a look at health care for children in the North or on reserves? Want to look at education for First Nations children? How about their diets? They are just changing their methods, but the aim is still the same.

Totally sad but incredibly true. I hope that the First Nations people and Women remember what kind of monster is doing so much actively to hurt them in myriad ways daily and then vote their common sense this time.
This shit HAS to stop!

If Harper could get a million votes out of helping them he sure would. That's how you get on his radar. Let's hope there's a special place in hell reserved for he and his ilk.
JD

h salamander...yes it did say all we need to know, and you should have seen the look of contempt on Tom Mulcair's face, who was standing next to Valcourt and looking down on him. And you know what the pathetic thing is? Valcourt is or was a cut above most Cons, but Stephen Harper corrupts everything he touches, and drags everybody down to his own level...

hi anon...well now that the words cultural genocide have been used by the Chief Justice, good luck trying to arrest anybody else who calls it what it was. So don't despair the resistance has never been stronger....

hi Kathleen...our First Nations have been picked around forever, even though if it wasn't for them the white settlers would never have survived their first winters in this land. And even though they have given us so much more, including the name Canada. It's absolutely shameless and it's got to stop....

hi anon....yes I'm sure his oily dreams have something to do with his contemptuous treatment of our First Nations. And of course it's his kind of fundamentalists who did the worst damage. But native population is the youngest in Canada, and with our help they will raise their status, and help correct this outrageous and racist injustice....

hi e.a.f....I was pleased when Harper issued his apology on behalf of us all, but I should have known it was just more empty words. And his failure to hold an inquiry into the missing and murdered women, even though it means so much to so many is simply unforgivable. The man as far as I'm concerned has absolutely no leadership qualities...

hi JD...well that's the problem isn't it? He's only interested in massaging the prejudice of his rabid base, whose comments about First Nations have to be seen to be believed. As I said in my post, I believe that reconciliation can be a way of renewing this country and making it a better place for all to live. But it won't be Harper who does it, so if we want to renew our country we've got to get rid of him and his filthy government...

hi anon...that idea and that organization is brilliant. Wouldn't it be great if First Nation's people helped defeat the Cons in some ridings, and wouldn't that be justice? I wish them all the luck in the world...

They certainly did so in Québec in 2011. The two largest ridings here, each one larger than a great many countries, have NDP MPs of Indigenous origins. Roméo Saganash (Cree) from Abitibi—Baie-James—Nunavik—Eeyou - a riding which is pretty much the northern half of Québec, and home to Cree, Inuit, Innu, Naskapi and other peoples, and Jonathan Genest-Jourdain (Innu from Manicouagan, another huge riding in northeastern Québec (largest city, Sept-Îles, and some very large reserve towns).

I'm always annoyed at the degree of anti-Native racism permitted in comments to supposedly reputable media, even the CBC. If those comments targeted another group, they'd be deleted. John Pilger is among the journalists and human rights advocates in Australia who document that treating Indigenous people down there in the same way - yes, including the residential schools (the "Stolen Generation") - has had the same impacts upon them, in a very different climate, with people of very different cultures and genetic origins. http://johnpilger.com/articles/the-secret-country-again-wages-war-on-its-own-people

The smarmy piece of shit in the blue shirt and baseball cap in the photo on the right is PM Tony Abbott, Steve's thinner Austral twin in contempt for Indigenous people and ecocide. We see him feigning friendship with some Aboriginal Australian youth...