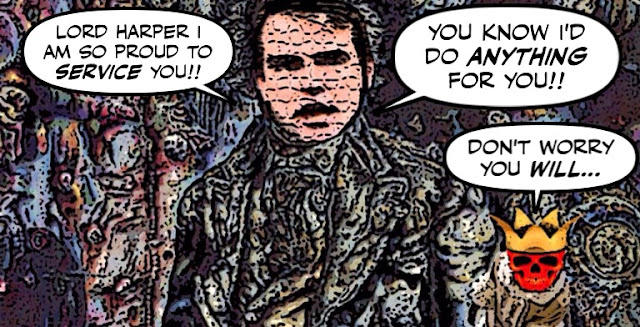 As some of you may know, I like to compare the Con Immigration Minister Chris Alexander, to the ghastly portrait in The Picture of Dorian Gray, Oscar Wilde's classic story.

Except in this story Dorian is Chris, and his portrait starts to turn monstrous after the once young bright diplomat sells his soul to Stephen Harper.

And today I have another scary chapter in that horror story.

Which begins when Alexander is interviewed, appropriately enough, by Vice Magazine.

Where in the course of explaining why the Cons are fighting a court decision allowing women to wear niqabs during a citizenship ceremony, he delivered this gem:

The overwhelming majority of Canadians want that rule to continue to apply. We've done a lot in the past year to strengthen the value of Canadian citizenship. People take pride in that. They don't want their co-citizens to be terrorists. They don't want people to become citizens who haven't respected the rules.

Which seemed to suggest that women who wear niqabs are terrorists.

And since Chrissy has gone on about that a LOT, and once confused niqabs with hijabs... 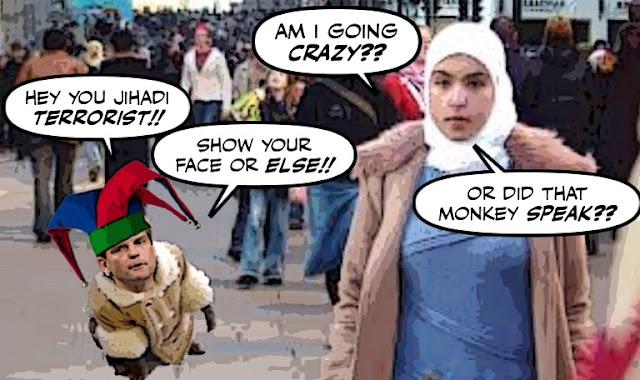 I was naturally alarmed AND disgusted.

Especially since as I pointed out yesterday, the Cons are again playing the dirty game.

And stirring up bigotry for crass political purposes.

But then believe it or not, it got even worse.

Because when challenged by the Liberal MP John MacCallum, Alexander responded by accusing the Liberals of being the "racist party."

“It is that party that has been the racist party in this parliament over decades,” Alexander concluded.

And since that gave me a concussion, after I fell out of my chair laughing, I think I'll leave Paul Wells to finish this sorry chapter, sum up the situation.

Chris Alexander is Canada’s Immigration minister, and during the longish period when he was an MP but not yet a minister, people used to say a smart fellow like him should totally be in the cabinet. Now fewer people say that. Let’s see why.

And correct the record... 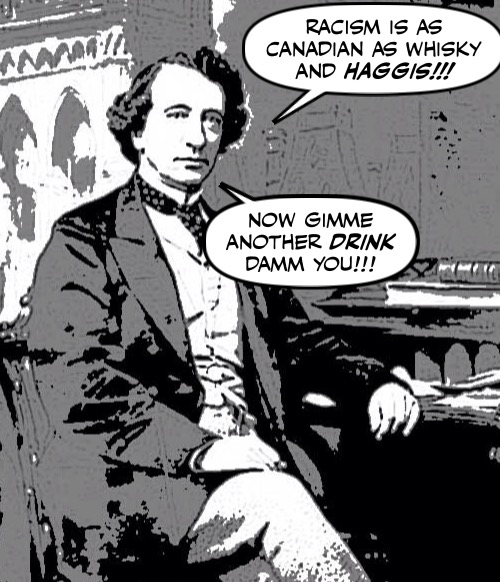 In 1885, the federal government passed the Electoral Franchise Act, which excluded all Chinese persons, whether naturalized or not, from the federal franchise. … Macdonald justified the denial of the franchise on the basis that the Chinese worker in Canada was merely a sojourner, and while ‘valuable, the same as a threshing machine or any other agricultural implement,’ the Chinese immigrant to Canada ‘has no British instincts or British feelings or aspirations, and therefore ought not to have a vote.’

Before reaching the obvious conclusion:

So yup, those were definitely laws, plural, that limited immigration to certain groups on an ethnic basis, passed before Laurier and King. It is certainly impossible for Chris Alexander to know about their policies without knowing about Macdonald’s. So he’s a liar.

And delivering the obvious verdict:

Chris Alexander, speaking with the authority of his ministerial office, delivered a delusional and culpably misleading capsule history of Canadian immigration policy. As if he takes Canadians for fools. He’s one of the least impressive ministers in an increasingly weak government bench.

And all I'd add is that Stephen Harper does corrupt them ALL... 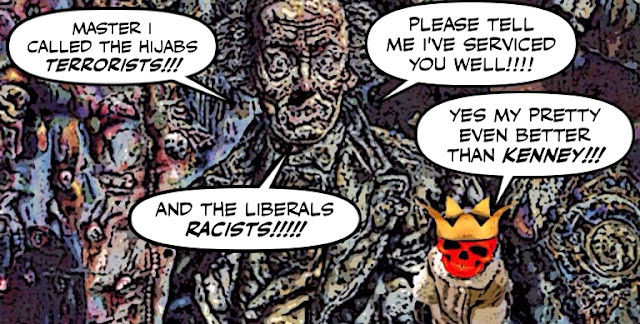 And of course, that when the day of justice finally arrives.

Chris Alexander will have to explain his ghastly record.

And his crimes against Canada and its values.

In the box with all the others...

Perhaps Alexander is suffering from the Cons version of PTSD (Post Traumatic Stephen Disorder) which results in severe premature senior's moments that come about from being around a leader to whom, as Flanagan had told us, words do not mean much? :)

Other than obviously genuinely, or wilfully, forgeting MacDonald's well known racist treatment of Chinese people who had come to contribute to the building of this country, MacDonald was also involved in what has now been called "cultural genocide" of our AFN people by no less than our Chief Justice of the SCC, Beverly Mclachlin, and Paul Martin.

Seems poor Alexander has delusional moments where he thinks that all the shameful acts that had happened in our nation's history could only have been committed by those nasty Liberals because that must be what his revered leader, Steve, had been telling him, eh?

And if the people in his riding are paying attention, and are not stupid, come Fall, I suspect he will have a new disorder: "electile dysfunction".

This is just a cheap trick to adjourn parliament on a divisive hot button that has been overruled by the supreme court and in total probably affects less than 20 people per year. The law is purely symbolic and does nothing except portray Canada as a racist nation as anyone who does not become a citizen can still retain their residential status. If we were to follow this stupidity to its logical conclusion we would not let anyone into the country wearing a face covering and could logically extend it to those with full face beards, shaggy hair and sunglasses. The opposition should respond by tabling a bill to have a moratorium on wasting taxpayers money on items that have already been struck down by the supreme court and have no bearing on the well being of Canadians. This is the same game the Cons in the senate are playing to prevent the release of documents related to lack of procedural control over senate expense. They are using tax payer money to interfere with the legal process.

I do know there are 1,200 murdered/missing First Nations women and Steve said it wasn't on his "radar". I know something else, if there were that many women missing from the 10% neighbourhoods of Canada, the Bridle Path, Kerrisdale, etc. there would be police investigators hauled back from retirement to ensure the murderers were caught.

Paul Martin would tell that differently. anon, try and get your facts straight before you run off on your mouth.

Sorry Simon, I respect your posts very much but I do not respect people that make stuff up to suit their lies.& agenda's. from Irene

@Anon 7.11 pm : You are the one who should get your own facts right before you make a fool of yourself like you have just done: http://www.cbc.ca/news/politics/paul-martin-accuses-residential-schools-of-cultural-genocide-1.1335199

I take it you are capable of reading from the link above that Martin called it "cultural genocide". Are you really a Cons supporter pretending to post here? This is not the firsr time I have noticed you shooting off your mouth. Lol

hi anon...thanks for that link. I didn't think to checkout Wells' twitter feed, but I must say he's never sounded better. And I REALLY enjoyed this tweet:

Don't even bother trying, Chris. You had a lousy day thanks to your firehose mouth. Give it a rest.

@Anon 7.11 pm or "Irene": I am the original 8.48am. Further to the link for Maartin, here is another link that shows that Beverly Mclachlin also considered the treatment of our AFN people as "cultural genocide": http://www.theglobeandmail.com/news/news-video/video-highlights-from-chief-justices-lecture-on-canadas-attempted-cultural-genocide-on-aboriginals/article24697633/

And here is a link that shows what John A. Macdonald had done with regard to the residential schools that has now been called "cultural genocide" by both Martin and Mclachlin: http://aptn.ca/news/2015/06/02/canada-guilty-cultural-genocide-indigenous-peoples-trc-2/

I have been posting on Simon's site for some time. Once in a while, apparently, Cons trolls show up here to attack his views which I agree with in the large majority of the time. So, perhaps you think you can fool some people by appearing to apologize for calling me out for shooting off my mouth? Interesting twist ... but it did not work. ;)

I've thought that all along. If they haven't solved the cases how do they know. Said it to everyone I know and even written it on comment threads but the main stream media hasn't thought their way through that.