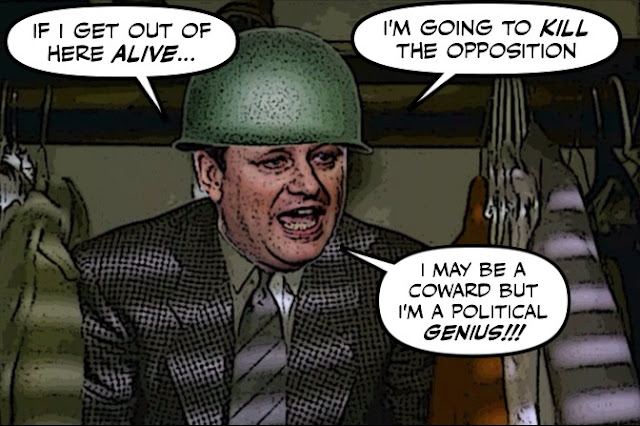 I wouldn't be surprised if the dark idea crept into Stephen Harper's Jurassic brain even as he cowered in that closet, on that fatal day on Parliament Hill.

And at the time he must have thought it was brilliant.

He'd draft a sinister anti-terrorist bill that would turn Canada into a police state, and end internet freedom. Use it to go after his many enemies real and imagined.

And if the opposition parties dared vote against it, he'd accuse THEM of being terrorists.

But sadly for Stephen Harper, he is no political genius.

And as Bill C-51 clears the Senate today, he must be back in that closet, shaking like a leaf or running for his political life... 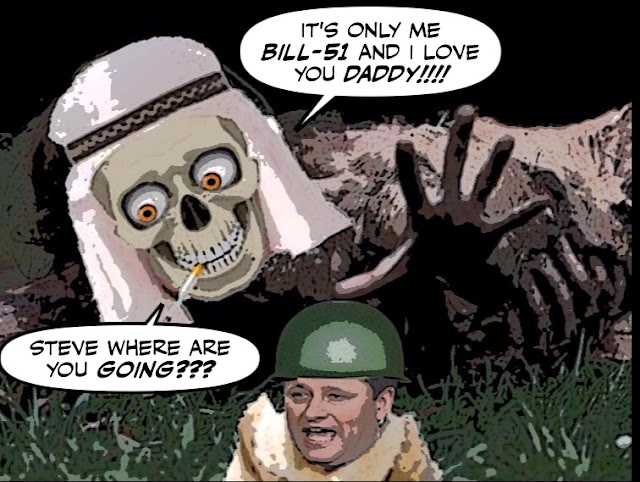 And whether as Steve Sullivan suggests, it will be his Waterloo.

Things are not going Stephen Harper’s way. People aren’t as scared as they used to be — and fear is the fuel that keeps his government going.

Politics is all about unforeseen events, of course, and while Harper might have anticipated the lingering sickliness of the economy and the growing restlessness of his caucus, he couldn’t have predicted how quickly a political asset like terrorism could turn into a liability.

The Fear Factor is fading. His never ending campaign to scare Canadians into voting for him is backfiring. Even some of his own supporters are abandoning him.

And every time he sends out his shuffling stooge Steve Blaney to try to crank up the Fear Factor... 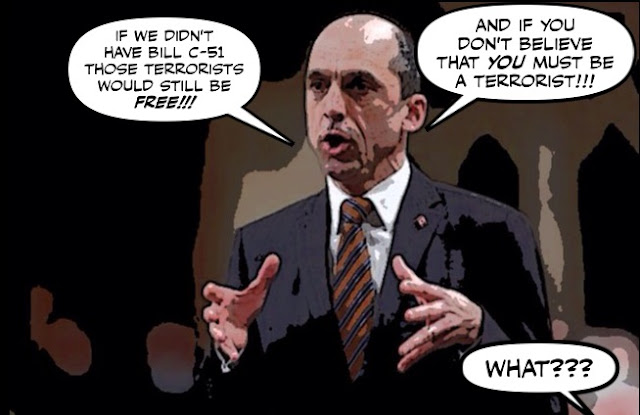 When John Nuttall and Amanda Korody — that drug-addled B.C. couple whose only connection to jihadi terrorists seemed to be an undercover RCMP officer pretending to be one — were convicted this week, Blaney again assured us that ISIS has a knife to the nation’s throat and only C-51 can save us.

He only makes himself look more ridiculous.

Either he missed the irony or he was ignoring it: Nobody is claiming terrorism isn’t a problem — and the police appear to be doing their jobs just fine without C-51. For Harper, the terrorism threat only works politically if it’s vague and easy to exaggerate. Specific cases that end in conviction don’t help him; they only undermine the argument that the bill is necessary. 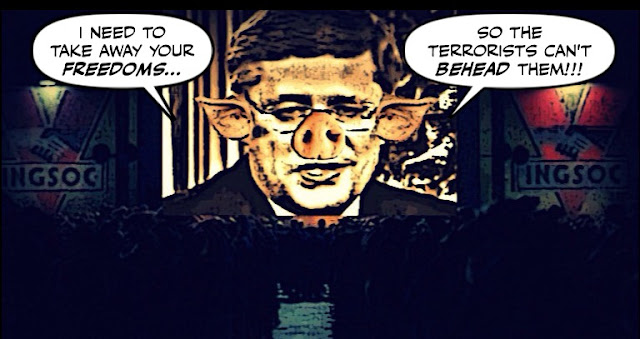 And if all that wasn't bad enough, this scathing report makes his claim that only HE  can keep us safe look even more fraudulent.

The events from last October remain a “grim reminder that Canada is ill-prepared” to stop terrorist attacks, with the RCMP suffering a lack of “planning, training and resources” to protect the Parliament buildings, a long-awaited Ontario Provincial Police report says.

The report, one among several released Wednesday, says the RCMP’s ability to protect Parliament Hill has been stretched by resource issues stemming from budget cuts imposed in 2012 by the Conservative government.

Which must surely shock Canadians, and make many of them wonder who is the REAL terrorist supporter? 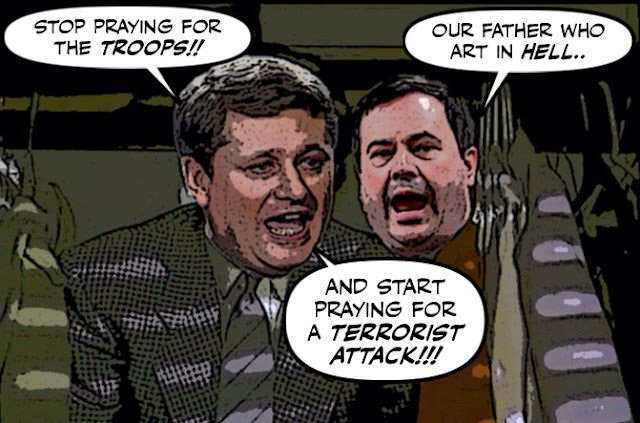 For who stands to benefit more from a terrorist attack than he does?

Which of course makes his defeat only more necessary and urgent.

For we must make Canada safer.

We must defeat that fascist Con regime so we can scrap that dangerous bill.

And send the most dangerous terrorist Canada has ever known.

To the place he rightfully belongs... 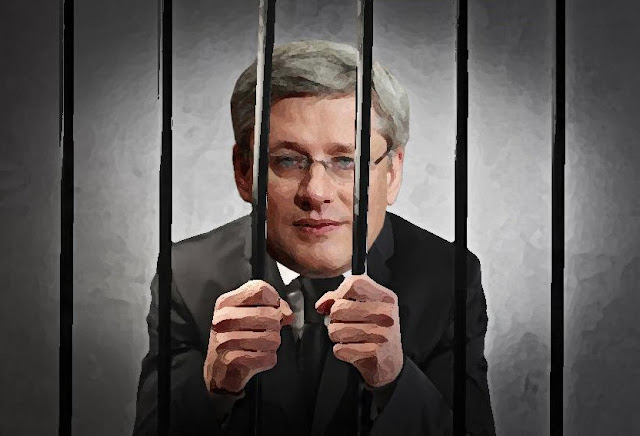 The fight against Bill C-51 will continue all the way to the next election.

Twisted Sister "We aren't gonna take it no we're not gonna take any more..." my theme song on the way to election time. I can hardly believe it but out here in BC everyone I talk to is against Harper. Plus we know Alberta just went Orange in a landslide victory. Harper is in his closet wetting his pants.

I haven't seen any terrorists here in Canada. we had a couple of mentally ill people running around and a couple more mentally ill men who killed 2 soldiers. For that we don't need Bill C-51 which destroys our democracy.

if Steve is so concerned about people being killed by terrorists why hasn't he armed the RCMP. He had from 2004 to 2014 to ensure the RCMP had an adequate supply of carbines. But no. Steve wanted to save money to give tax breaks to his base. What happened? Well 3 RCMP officers got murdered in Moncton. They didn't have the necessary carbines. yes, we've hear Poulson say they were available. But he forgot to tell us the rest. there were only 6 and they were on a training exercise over an hr. away. Can you believe it, a major city in Canada's police force did not have adequate fire power to deal with a deranged armed man and 3 RCMP officers got shot to death.

Even a year following the shootings and deaths in Moncton the RCMP have only one carbine for every 12 RCMP officers in Canada. Oh, shit. Lets not hope there is a gang shoot out because the RCMP won't be able to deal with it. Their vests are 25 yrs out of date. There hand guns are vintage material. So much for law and order. Its so easy to pass 81 bills, but to supply police officers with adequate work equipment, impossible. The Cons ought to be arrested and tried for not providing the RCMP with adequate work equipment.

If 3 guys were killed on a construction site and didn't have safety equipment, the CEO would be in jail. a good place for steve and his Cons.

The guy at the dentist office awhile back thought Jim Prentice was a great guy and he soon found out......Not!
I haven't had anyone say to me that they think SH is a great guy........hope it happens soon........I won't stay silent if this happens.......won't be 'holding my breath'!