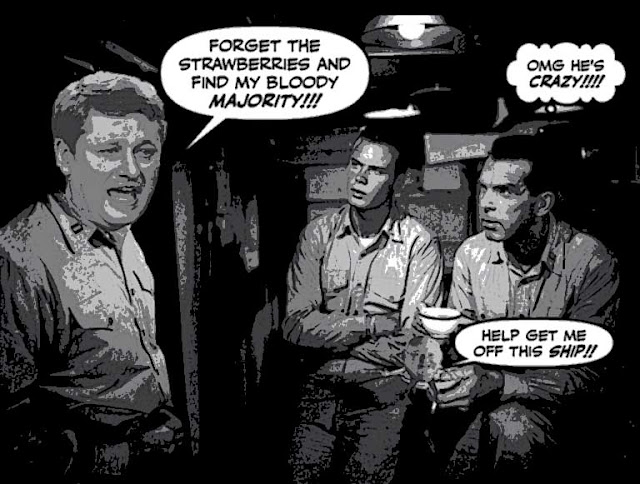 He's still the Captain of the dilapidated Con ship, the rusty tub that should have been scrapped long ago.

And like the crazed Captain Queeg in The Caine Mutiny, he's still going after his bloody majority, like Queeg went after the strawberries.

But unfortunately for Stephen Harper that majority is proving as elusive as those strawberries.

Because as yet another poll suggests, the Con ship is slowly sinking. 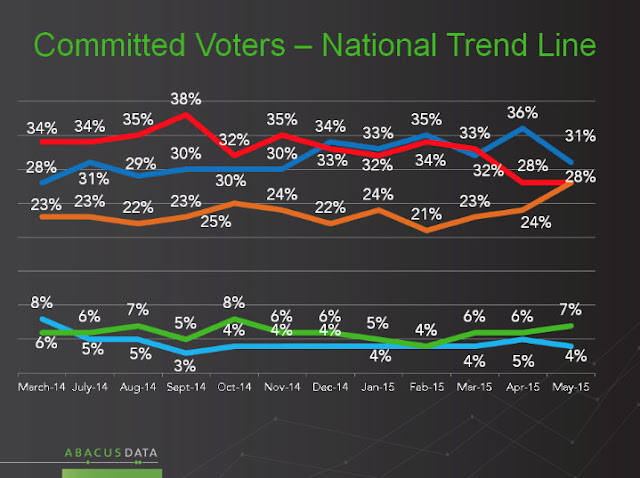 He's still heading in the wrong direction, heading further and further away from his precious majority. While the Liberals appear to have stopped their steep slide, the NDP is still surging.

The desire for change is still growing.

In this wave, 76% say they would prefer to see a change, although not all of these people feel strongly about the need for change.

And on the bridge of the Con ship, Queeg Harper must be growing increasingly desperate... 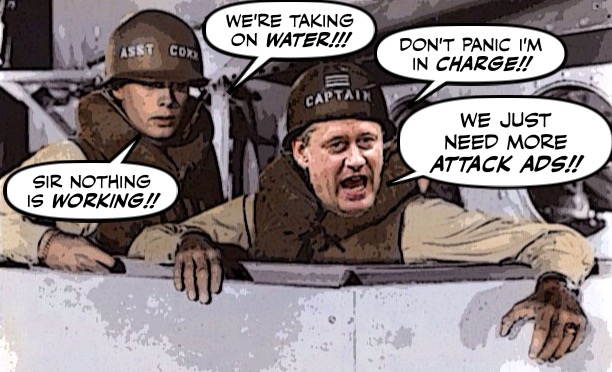 The results are sobering news for Conservative election planners. While our data had shown an uptick in support based on the recent budget, this effect has dissipated. With 20 weeks to Election Day the incumbents are struggling to build enthusiasm around their economic record or plans, and as our next release will reveal, the terror/security issue is losing momentum for the CPC as well.

Nothing is working for him. The economy is sinking or shrinking. The War in Iraq is going disastrously, as is his Great War on Terror.

And to make matters even worse, thanks to his dangerous anti-terror bill C-51, even some of his most faithful supporters are threatening to jump ship. 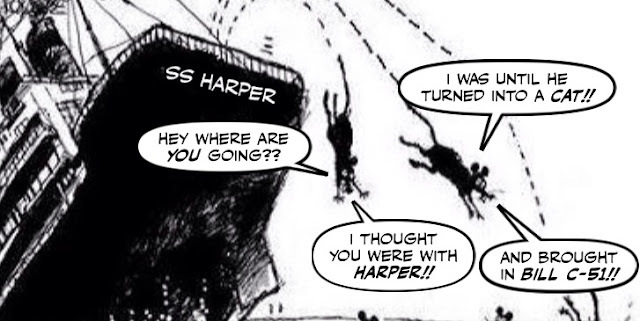 As the government's proposed anti-terror bill heads towards the legislative finish line, some of its more conservative-minded critics are warning Prime Minister Stephen Harper and his caucus that its passage could carry a heavy cost for his party when it hits the campaign trail later this year.

Libertarian-leaning voters who have backed the Conservatives in the past may choose to throw their support behind the Libertarian Party of Canada or independent, small-c conservative candidates, it says. "Although these might not attract large vote totals, they could drain off enough votes to deny the CPC a victory and lead to the return of the Liberals, or insert the New Democrats or a coalition into government."

And when even the gun lobby is angry at him, you KNOW he's in trouble... 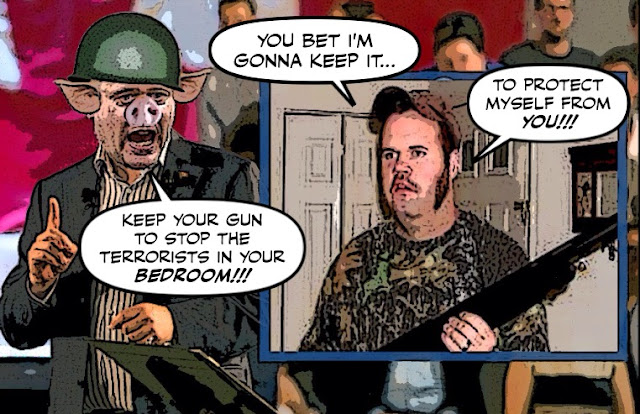 And as if all of that wasn't bad enough, it now appears even more likely that as the Con ship heads for the official start of the election campaign, blowing propaganda out of every funnel or orifice.

It's heading for an almighty collision with the humungous iceberg called Duffy.

Could the prime minister’s former chief staff and several senior Tory senators wind up testifying at Sen. Mike Duffy’s trial just as the federal election campaign gets underway? This scenario is becoming increasingly likely, as the pieces move into place for extra trial dates to be set aside in August to hear Duffy’s case.

Which would only increase that already strong desire for change.

And help send him to the bottom... 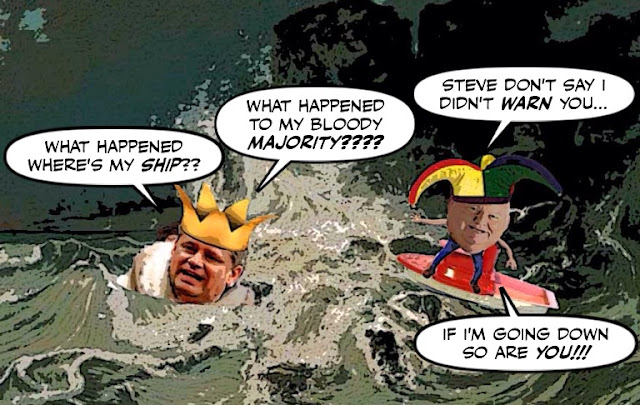 You know, the more I think about the great voyage we are about to embark upon, the better I feel.

The winds of change are in our sails, the rusty Con tub is slowly sinking.

And whether or not he's still sane enough to know it.

Queeg Harper is going down...

And that's an ABACUS poll. One run by conservatives.

Q: How often does the association representing all Canadian lawyers urge Canadians to march in protest of a Government bill (C-51)?

I presume that it's a fairly rare occurrence, good grief.

It was interesting to see the article about the "conservatives" not liking Bill C-51. they do ask a very good question; how would he feel with another party in office with access to that legislation. My response, he never thought about it. it never dawned on him he wouldn't be the P.M.

As housing becomes more expensive and salaries don't keep up, more and more Canadians are wondering what is in it for them to vote Con. they don't own homes, if they do 50% of their income is going to the mortgage. Pensions are becoming a bigger issue and then we have the mother of them all, the Truth and Reconciliation report. Some party or group is going to remember his response to Mansbridge, an inquiry into the 1,200 murdered First Nations women was not on his "radar", and run an interesting ad.

If each group Steve has offended simply worked within their group, we would see the end of him. Its ABC. We need to get people out to vote. That is what will make this election work for Canadians.

Could the prime minister’s former chief staff and several senior Tory senators wind up testifying at Sen. Mike Duffy’s trial just as the federal election campaign gets underway? I suspect this will not happen because there will be a "deal" made before they can testify. This happened in BC with the Basi, Virk trial and I suspect it will happen in the Duffy trial. This government will stop at nothing to win.

I hope his "loyal" followers throw the anchor around his cowardly neck as the ship goes down as it's only fitting he wear it as he wears the blame for all the corruption under his watch that he conveniently blamed on others.
The screws are tightening on this ship of fools and I will savour every cannonball that blows another hole in any credibility that remains. Abandon ship!!!
JD

hi anon....it may be conservative oriented, but the important thing is that it reflects exactly the same trend that other polls are showing. And all show the Cons heading in a downward direction....

hi Hugh...the fact that the entire legal establishment from the Chief Justice down have made clear their contempt for Harper and his gang is an extraordinary situation. And that alone should be grounds for removing them from office.I don't exactly know what to call the Cons, there are so many choices. But one thing is for sure, they're not a Canadian government....

hi e.a.f...yes I like that too. I've asked the occasional Con who comments here that same question: how would you feel if our side is in power and used Bill C-51 against YOU? Needless to say that question was greeted with a long silence... ;)

hi Royce Shook...I don't think a deal can be worked out in this case. Duffy's lawyer seems to think he doesn't need one. And I don't blame him. The Senate seems to have had no rules, and the overall case against Duffy seems rather weak. If Bayne didn't think he could win on the evidence he would have been looking for a deal long ago. And remember, it's not the legalities that will hurt Harper, it's the public's perception of his role that will do him the most damage...

hi JD...yes it's encouraging to see how many of his one loyal followers have been alienated by his foul bill, as they should be. For they will be losing their freedoms along with everybody else. And it's only appropriate that it should be a wedge issue designed to try to trap the opposition leaders, that should end up trapping him. I like to think of Great Leader as a U-boat commander with the depth charges getting closer and closer. Sooner or later his whole rotten government is going to implode....

Yes Simon they are not a 'Canadian' government Harper merely usurped power. A disgusting sad sack is he. Full of hate and judgements I can't stand the sight of him or his crap con ads we all pay for. So let me be clear I cannot even watch a decent game of NHL playoffs with out those creepy ads. Harper is delirious if he thinks he can tom fool his way back. He is toast done like chicken done like dinner he is on his way out. And may I add looking increasingly nervous. Now he does not want to appear in public he wants to stay in his broom closet. He is dumber than a sack of ball-peen hammers. Actually I think I have just offended the hammers at least they are useful...

Good on you Simon.