Solo Stephen and the Scary Collapse of the House of Harper 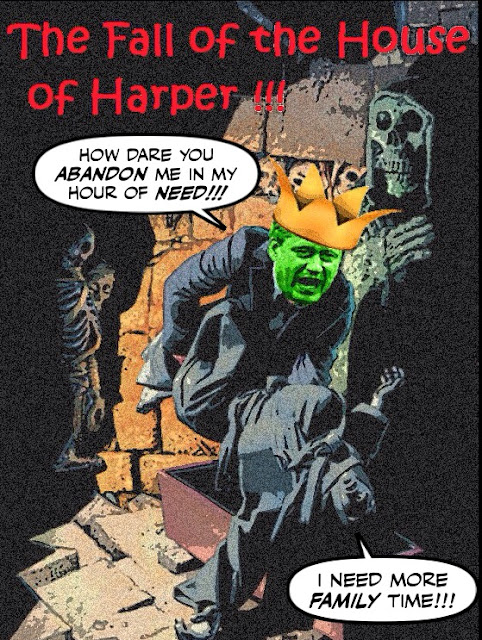 As you know Stephen Harper has been losing so many ministers recently, that even though he's a psychopath not a people person, he must be feeling awfully lonely.

And of course desperately vulnerable.

For how can he claim that the opposition parties are unfit to govern?

When his front bench is now so thin, and his talent pool so shallow, one really has to wonder whether the Cons can still call themselves a government.

What with their Great Leader looking so shrunken... 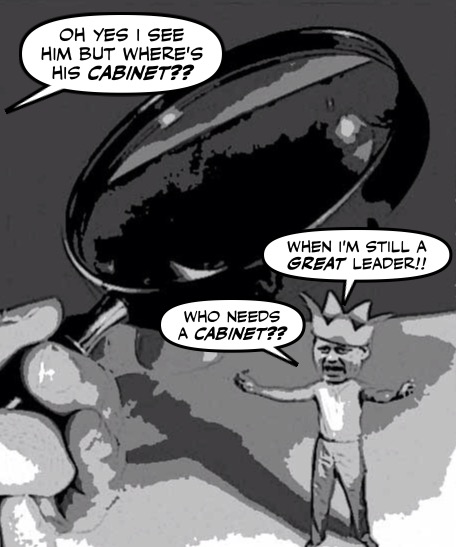 And as Lawrence Martin writes, his Con regime looking so enfeebled.

Wherever you look in this government there are signs of what the French call “dégringolade.” With Industry Minister James Moore calling it quits last week, the cabinet has now lost most of its lead players. In the Senate, big Tory names have fallen, the Red Chamber fast becoming the dead chamber.

In the Prime Minister’s Office, chief of staff Nigel Wright went down owing to a cover-up operation and others have been caught in dirty tricks.

Or looking like something out of the fall of the House of Usher... 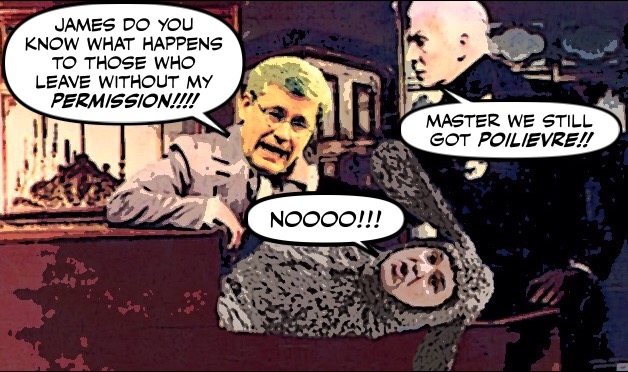 What can be said? With all the falls, all the ignominy and gloom, does the House of Usher come to mind? In Ottawa, whispers about a pending collapse of the sort that has befallen other governments of long incumbency have become more than whispers.

Smelling of death, and teetering on the verge of collapse.

With its deathly leader's claims sounding ever more fraudulent or hollow.

The exodus does make it harder for the PM to belittle an opponent as not being ready for prime-time. When so many of your own prime-timers have deserted you, it risks ringing hollow.

In fact so desperate is the situation, that even Tasha Kheirridin is alarmed.

At this rate, Prime Minister Stephen Harper might soon be able to hold cabinet meetings in the back of a van.

It’s never a good thing for an incumbent party to lose some of its strongest players, but for the Conservatives the problem isn’t just who’s leaving — it’s who’s not coming in through the door.

And with good reason. Not only is Harper losing all his best people, he's not recruiting any new talent. And looking more and more like solo Stephen, or a one-man band... 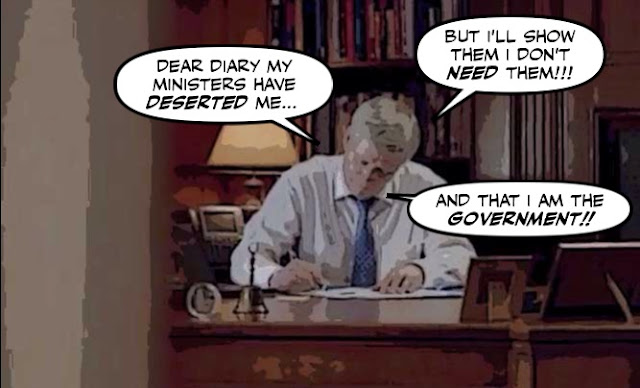 Ironically, the Conservative party’s own ads buttress this storyline by showing Harper working alone, late into the night — presumably to drive home the idea that the PM is the one man alive who can keep Canadians safe from terrorism and economic chaos.

Unfortunately, this also reinforces the idea that he’s a one-man band.

Or more and more like a monomaniacal leader whose depraved lust for power and total control has ravaged his country, decimated his own ranks, and is destroying the future of his own party.

Strong leaders leave a legacy for their parties. That means recruiting talent, nurturing it and planning for succession. Elections aren’t just about the next four years — they’re about the future. In the Conservatives’ case, the future seems to be eroding.

Which of course couldn't be better news. Because at a time when the desire for change is so strong, all of the above can only fuel it further.

And make our message REALLY simple.

The Con regime is rotting from the head down, and way past due.

This is NOT a government.... 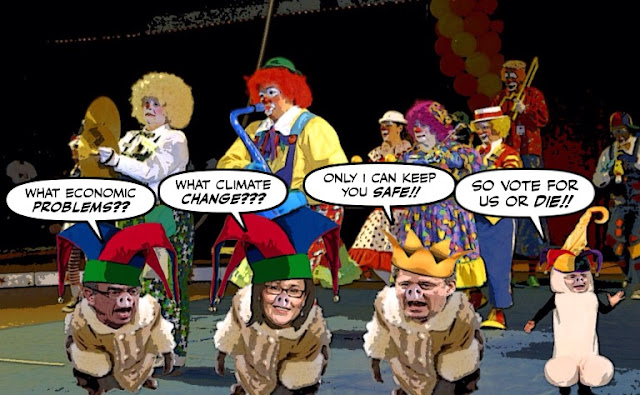 And this is NOT a Great Leader... 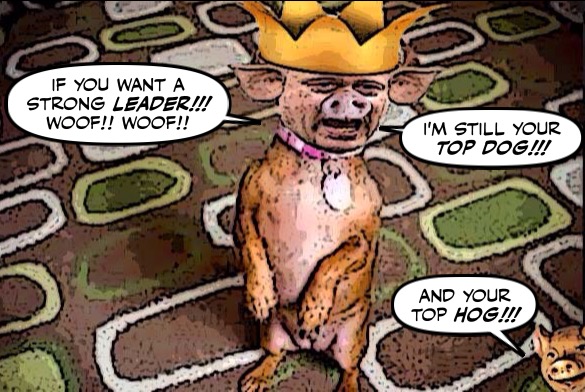 Who for his own protection and our own.

Back of a van ; supply closet surely.

Those "Lonesome Steve" ads crack me up..the fact that he is sitting there writing something supposedly, no computer in sight, says all you need to know about these Flat Earthers...

today's CBC news announces yet another Con appointee "overspending" with her spouse. Yes, another Marie An. moment.

Lonesome Steve, yes, no one wants to play with him anymore. they saw the internal polls and decided best to go for the pension asap.

Now that Moore has announced he isn't running, they are talking about the former mayor of Surrey, Diane Watts, being a "star candidate" for the Cons in B.C. If that is "star" material they are in trouble. Its not like she doesn't have administrative skills, but there is that little problem of a hundred cops short and not doing anything about the shootings and crime in Surrey while she was mayor. Now do you really want that in a federal cabinet??

Simon: You likely have already seen this but some of your readers may not have: https://www.youtube.com/watch?v=Ei50lM6ab1c

Harper is getting what he deserves after 10 years of his one man freak show. They cant stand him anymore or his hideous c-51 and that will ultimately be the anchor that drags him to the depths of irrelevance come election day.
JD

Those are pictures of him writing his book on hockey! Don'tcha know? He doesn't give a shit about Canada!

Pride goes before destruction; a haughty spirit before a fall (Proverbs 16:18)

Maybe Lonesome Steve could convince his fellow right-wing extremists such as Ezra Levant and Brian Lilley to run in the next election. And make Sarah Palin an honorary Canadian citizen so she could run too!

hi rumleyfips....you mean his mobile closet, or Anti-Terrorist Command HQ. Which is closely followed by a tank, and his mobile diaper changing room... ;)

hi mizadarlin....yes it is outrageous isn't it? A Canadian Prime Minister pretending to work while a film crew tries to make it look like reality. And of course the scene where he turns out the lights leaving the film crew in the dark is absolutely hilarious. You know I have in my possession a long ago tape of Harper taping a message, flubbing his lines over and over again, and getting more and more frustrated. That's even funnier, but I'm saving it for an election video...

hi e.a.f....yes I saw that story. Old King Steve really has the reverse Midas touch. Every appointment he makes, produces one appointee after the other who think that they too can live like kings...

hi anon....Thank you for the compliment. I too can't stand the sight of Harper. That's why I try to "improve" his look by giving him a monkey's coat, furry arms, and a pig's snout and ears. I find that makes him look a lot more attractive, and definitely reflects how I feel about him... ;)

hi anon...yes I ran the song in a recent post. I've learned play it on the guitar, and am now trying to memorize the lyrics. It's a great production and I intend to play it as frequently as possible all the way to the election.... :)

hi JD... I also feel that he is getting what he deserves. If he had been a more decent person who knows what he might have achieved or how many years he might have remained in power thanks to his divided opposition. But he wasn't decent, it was all and only about him, so he's left no positive legacy, and no serious replacement, and will almost certainly take down his party with him. He'll be remembered for all the wrong reasons, and I predict quite soon forgotten...

hi astone....I wouldn't be surprised if he was signing his book. I understand that's the only way he can get anyone to buy it. I have to inquire whether I can get a stack of them for a dollar or less, to build a bonfire on the beach... ;)

hi David...yes it does indeed, and there is no more haughty spirit or monster than Harper. He had chance to build many things but all he has ever done since he was in high school was attempt to destroy things...

hi David....well that would at least give the two Con clowns Levant and Lilley a semi-respectable occupation again. Because goodness knows their Rebel media gig isn't going anywhere. I've heard stories that they are fighting each other and I give it until the end of the summer before it finally implodes...

hi anon...yes I saw that story. I didn't link to it because it was a little too vulgar for this blog. My Mum very occasionally reads it, so I can't be too careful ;) Besides I'm not interested in the private affairs of Con Minister I'm only interested in their hypocrisy. But why do you think I had Moore wearing that bad doggy suit in that crude photoshop I made? ;)

I wonder if anyone who went to high school with Harper has commented on how they perceived him.

Was Harper a loner or did he have lots of friends? Did he join any school clubs? etc.