The Day Canadians Sent a Message to the Terror Cons 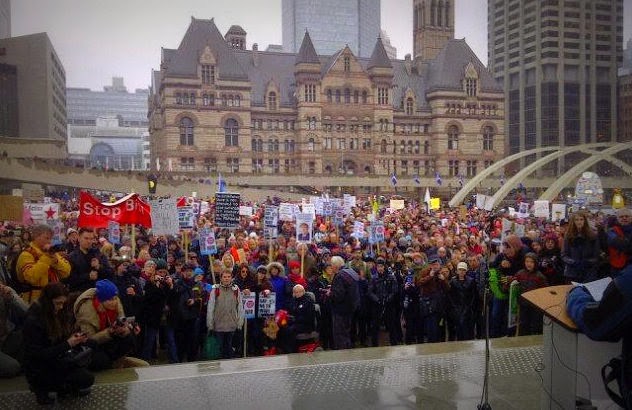 It was cold, wet, and miserable across most of Canada today. A day to stay at home if ever there was one.

But that didn't stop tens of thousands of Canadians from turning out to send a message to Stephen Harper and his foul Con regime.

We are not afraid, and Bill C-51 must be KILLED.

Approximately 1,500 people converged on Toronto’s Nathan Phillips Square on Saturday to protest the federal government’s proposed anti-terror bill, one of 55 rallies planned across the nation on what is being called a “national day of action” against Bill C-51.

Other major cities holding protests included Vancouver, Montreal and Ottawa, where hundreds of chanting protesters clogged the street outside Prime Minister Stephen Harper’s office before marching onto the grounds of Parliament Hill. 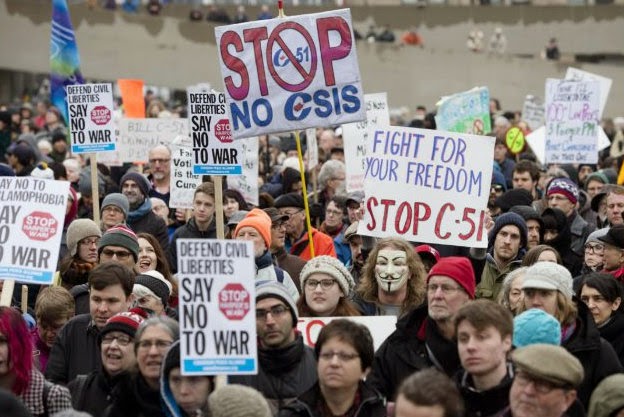 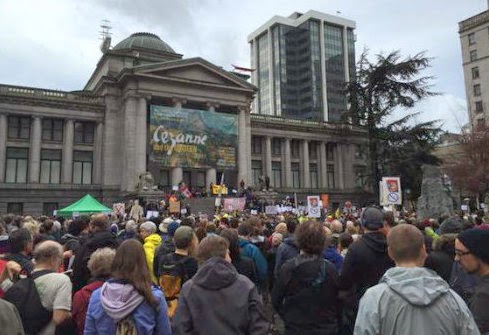 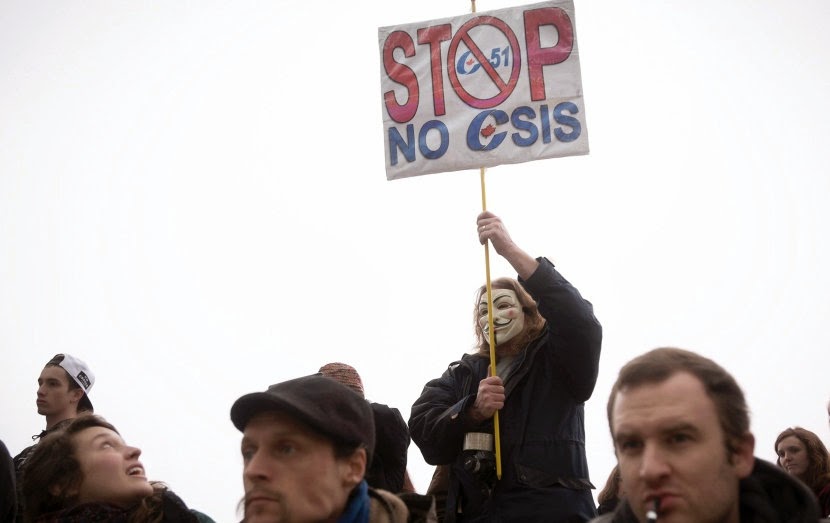 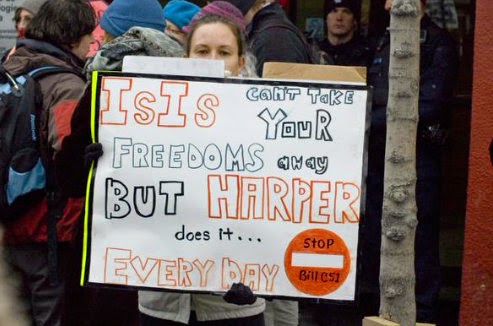 The glorious sights and sounds of freedom over feardom ...

As you know, I sometimes despair that progressives seem to find it so hard to take to the streets in protest.

But today I was so proud of them.

The young ones, the older ones, the red, the orange, and the green. All of them.

And you should have seen all the Stop Harper signs... 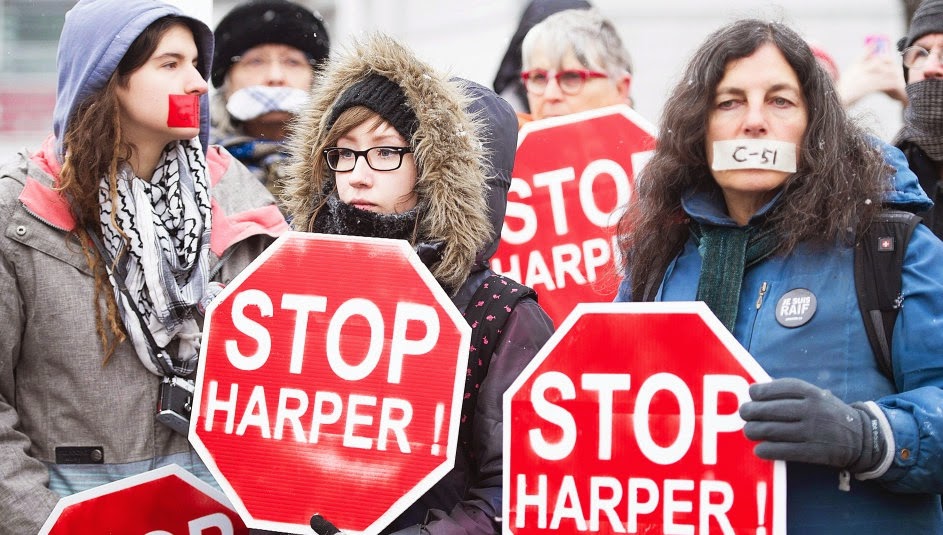 It sent my spirits soaring. It made me think that anything is possible.

And of course, it should make Great Closet Leader very afraid... 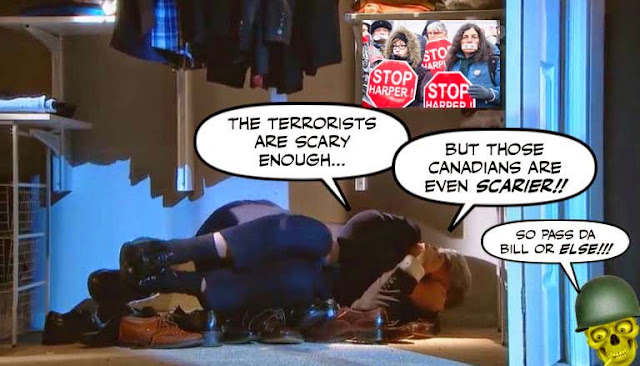 Because Canadians are aroused at last.

And it is just the beginning... 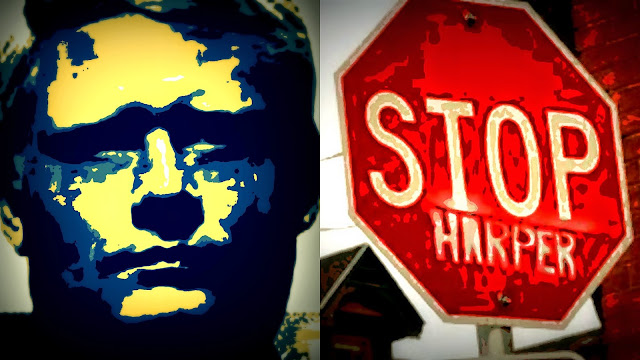 Like the dress, you either get this joke or you don't.

Can someone please post the weblink that asks for the United Nations to monitor the upcoming election?

Yeah, maybe 10,000 people out of a population of some 35 million sent the Harper government a message. Some message. If anything it's a positive message for Steve to continue doing what he's doing.

hi Morlock...thanks for the link, and I must admit it's a pretty good one. But it is frightening isn't it, that it makes so much sense. When I saw the hapless stooge Blaney invoke the holocaust to justify that police state bill I knew we had hit rock bottom...

hi David....in another time that request would have sounded absurd. But so low have we fallen, and so corrupted is the Con regime it actually makes sense. My god what a nightmare...

hi Omar...now don't be so gloomy. What's a matter is baby keeping you up at night. ;) Seriously though everything is relative, and it's a good start. It was well organized, and it got people to turn out all over Canada. And since we are such a complacent country that is something to celebrate. Next time there will be even more of them, and it does help build a movement...

CSIS just called out the rise in white supremacy as being a greater threat than ISIS.

Hey Simon - cut Omar some slack. My numbers were a little higher, anecdotally doing head-counts on photos and seeing several of the 'national level' demonstrations - thus maybe 15,000, On the one hand, this is pathetic turn-out for a large country like ours - I seem to recall that the anti-prorogue demo's of 2010 attracted bigger crowds because I was at one in Barrie which for a smaller centre did attract 400 people at that time.

However, yesterday, no there were not 100,000 people nationally which would at least have been a 'blip' on the CON's radar.

"Maybe next time" but the issue will have to be more immediate and threatening - this probably won't happen between now and election time.

The bigger issue, I was at a small demo in front of a cabinet minister's riding office, big deal 45 people showed up in a riding of 90,000 voters, but heck, we did have a good time and it felt good to get some bile off our chests.

Bigger issue: when the demo leaders were asked 'are we just here to protest or are we here to vote out this CON MP and if so, how are we going to avoid vote splitting?' - the discussion got contentious. Some said they will still vote for their favourite even if no chance but some said they'd vote for the leading opponent regardless of party.

So at the end of the day if you're not hitting the streets to kick out the government, then what are you doing there?

I just think that the event failed on 2 counts - small numbers and lack of political outcomes. However, I'll go again whenever that is.

Ha! No, the baby is almost 5 years old now so her keeping us up at night is in the past. I try not to be gloomy, but there has been so many of these "good starts" over the years that staying positive is trying. People should have started paying attention to this situation the moment the Reform Party came to power. Seven months prior to the federal election is too little too late I fear. On a positive note; my mutual fund portfolio continues to kick ass and has done so regularly under Harper's stewardship of the economy. I hate saying that, but it's true.

This bill is not about terror or terrorists. This bill is about gaining total control over Canada and its citizens. This bill will be used against Canadians by the Cons when Canadians protest against foreign governments and their corporations when they start their incursions into our economy. Protest TFWs, get arrested. Protest Chinese government corporations--you're an economic danger to the country, get arrested, the list goes on. First Nations, don't want a pipeline through your land, don't want your land fracked? You protest, you get arrested. You've acted against the national interests of the country. This bill is about total corporate control, not about some foreign or home grown terrorist wannbe. We have enough laws to deal with them already.

hi anon...I always cut Omar some slack. I love the guy. But what I'm trying to gently suggest is that we should celebrate the burning candles rather than just curse the darkness. The fact is the organizers did get people to turn out all over the country, they prepared good posters and had a decent internet campaign. And the event got reasonable coverage in the MSM which wouldn't have happened if we stayed at home. Hopefully those who heard about the demos will be motivated to learn about the issue and more will join us next time. We need to stay as positive as possible if we are going to have the strength to defeat the Cons...