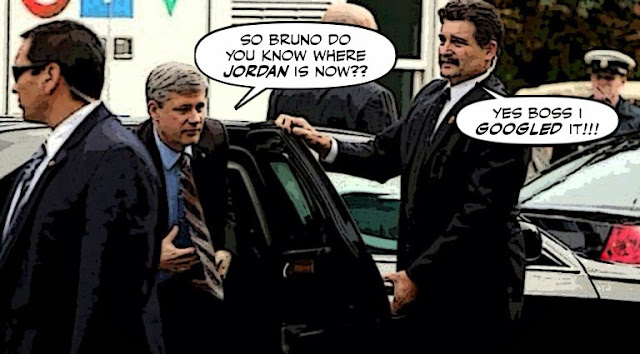 Well don't say I didn't warn you eh? Two years ago I wrote a post saying that I didn't think it was a good idea that Stephen Harper should appoint his chief bodyguard Bruno Saccomani to be our new ambassador to Jordan.

Not with Bruno's lack of diplomatic training, and not when so many of those who worked for him thought he was a bully.

The management review included interviews with 41 per cent of the 116-member unit, many of whom reported problems with their boss including intimidation, favouritism, discrimination and harassment.

And I also warned that I thought that CSIS was out of control, and also hiring the wrong people... 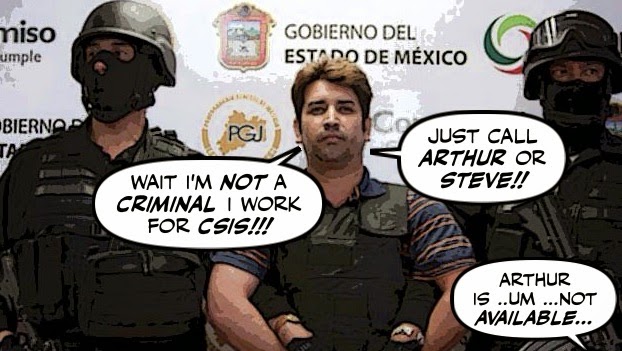 Especially since the guy Harper appointed to keep an eye on its activities, Arthur Porter, was by then in a Panamanian prison.

And sure enough now we have the makings of a double disaster.

The Canadian embassy in Jordan, where Stephen Harper posted the former head of his security detail as ambassador, is at the centre of new allegations linking Canada to a suspect arrested by Turkish authorities and accused of helping British schoolgirls join Islamic State militants in Syria.

Canada is being accused of funnelling young girls to the ISIS crazies.

Even as Great Strong Leader claims only he can save us from them... 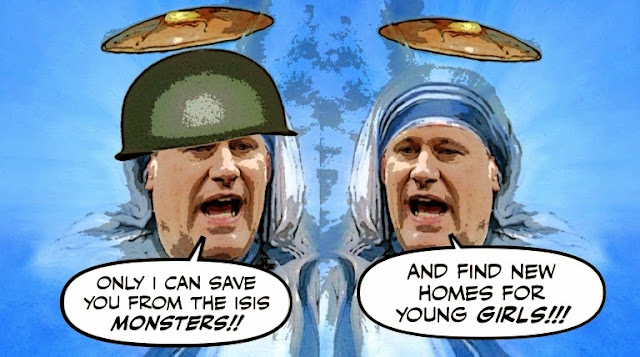 Champion the rights of women. And lead the war on human smuggling.

And all I can say is, the story of these three young runaways is HUGE in Britain and other countries... So he better have a REALLY good explanation.

No political leader likes to see his country’s spies being outed. And Prime Minister Stephen Harper, a Conservative who embraces secrecy as a sturdy article of faith, is no exception. But there are times when silence is anything but golden, and this may be one of them.

The allegations make Canada and its spy agencies look complicit with human smuggling in aid of the enemy, not an attractive image.

Because this scandal could really damage Canada's image in the world. Make us look even more like a grubby pariah nation, if that's possible.

Which is horribly depressing.

But of course there is a HUGE consolation prize. This sordid scandal could also put a massive dent in Harper's credibility.

They cast a shadow over Harper’s relentless drive to expand our spies’ operations abroad and to increase their powers at home under the hugely flawed Anti-Terrorism Act — even as he rebuffs calls for greater oversight and insists our spies can be trusted to do the right thing at every turn.

And make even more Canadians question his motives... 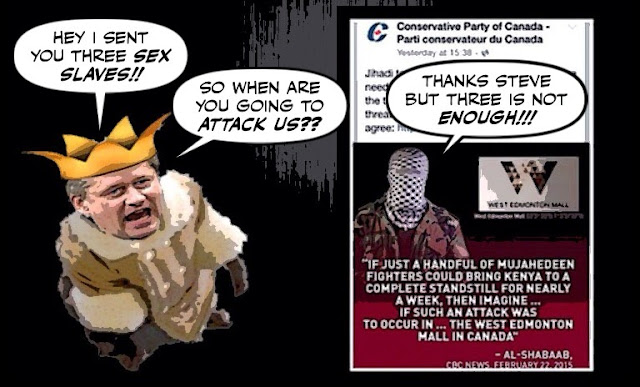 As well as his fitness to remain in office.

But we know what we have to do to fix that problem: defeat him in the next election.

Which just became a little easier now that we can accuse him of being an ISIS collaborator, who supplies them with young women.

But what we need to do now is demand that CSIS not get even more powers. By among other things attending one of these rallies today. Because he does want to turn us into a police state.

He is out of control.

And he does need to be restrained. Before he pimps our values.

And turns this country into a mad house... 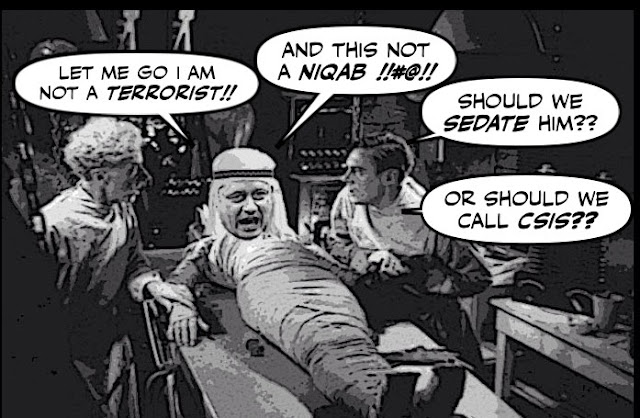 we want to play with the big boys but the country is run by the short pants. Little wonder they do Monty Python abroad.

Sorry, you have touched on it so I will repeat: With Harper's ex security boss/chauffeur running spies out of the Lebanese embassy and trading girls into ISIS territory I think he had better rethink our strategy. Does Harper think he is James Bond or our chief spy master. He must have planned this fantasy world when he appointed this man to the ambassadorship. It is so completely detached from reality that I think a shrink is indicted.

James Bond in 'short pants'! Now that's a visual I don't wish to have!

hi Steve...It is a horrible mix of ideology out of control and sheer bumbling incompetence. But Monty Python is too good for them, unless you're talking about the dead parrot skit... ;)

hi anon...as I said in my post, I knew that Saccomani was sure to screw-up considering his limited diplomatic skills,and his appalling personality. But I never thought that he would be running such a dubious and clearly incompetent spy operation. I defies belief, and as you point out, it is insanity...

Unfortunately Steve has ruined our reputation abroad now it turns out he is literally a pimp. That would explain the drunk passed out over dosed on alcohol 18 year old girl in his driveway the media blamed on Ben Harper's party. Since Steven is heartless um you put two and two together makes four does it not?

Yo right baby and if you believe that baby guess what I have an island in the Caribbean I can sell you cheap. Stephen is a pimp if that does not get him out of office? The drunk teen in the driveway should have gotten mister tough on crime gone gone gone...

Whole article is rubbish ... speculation and no proof provided. Leftist fear mongering is a greater threat to the country.