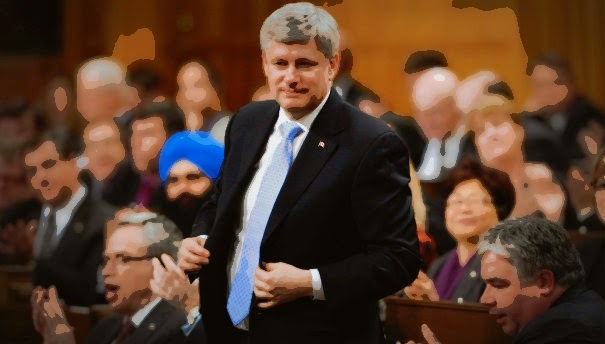 It couldn't have been a more deeply disturbing sight. A pumped up Stephen Harper soaking up the applause of his wildly clapping and cheering Cons.

With a weird smile on his face.

Even as he prepared to vote to send our troops into a bigger and more dangerous war.

Canadian fighter jets will soon begin bombing Islamic extremists in Syria as the federal government moves ahead with its expanded military mission in the Middle East.

In a vote Monday evening, the Conservatives used their majority in a 142-129 vote to overcome New Democrat and Liberal opposition and extend the ongoing mission in Iraq by up to a year and expand bombing operations by CF-18s into Syria.

Now I realize that Stephen Harper is a clinical psychopath, and he's never quite sure when to smile or bare his teeth. But that was obscene.

Smiling even though he's just increased the chances one of our pilots could end up in a cage like this one... 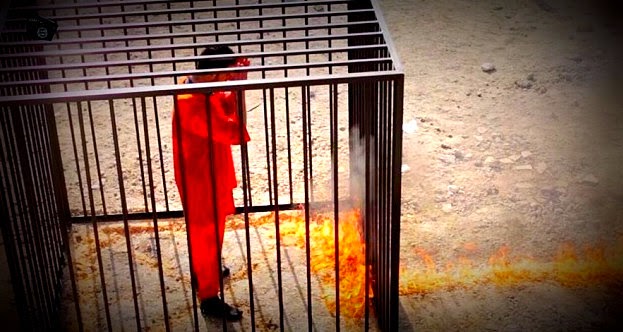 And Great War Leader just made our lives more dangerous. While claiming he's making us safer.

“We cannot stand on the sidelines while ISIL continues to promote terrorism in Canada as well as against our allies and partners, nor can we allow ISIL to have a safe haven in Syria,” the prime minister said.

When in fact ISIS has not declared war in Canada. A six second reference to Canada in a 40 minute rant by some hairy fanatic with a tape recorder does not a declaration of war make.

The two lone wolf terrorists had no known connection to the ISIS crazies, beyond the internet propaganda which triggered their own crazy actions... 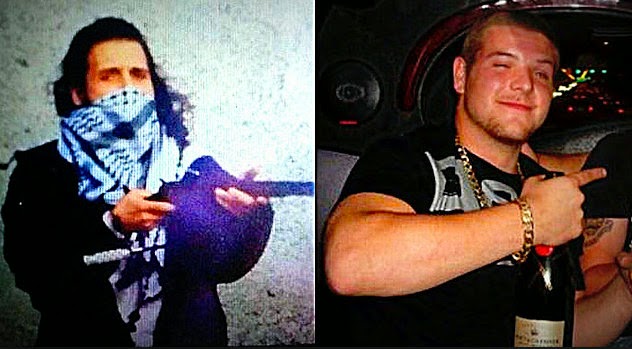 As I pointed out last night, the reason ISIS doesn't carry out attacks in the West like Al Qaeda does is because it's an apocalyptic cult more interested in seizing territory in that region to facilitate the return of their Messiah.

Which explains why although dozens of wannabe jihadis have left for Syria, the only ones who attacked us were two losers who weren't able to make it there.

And the only reason Harper wants to expand the war to Syria is to please his rabid religious base who want him to save the Christians in that country and their leader Bashar Al Assad. 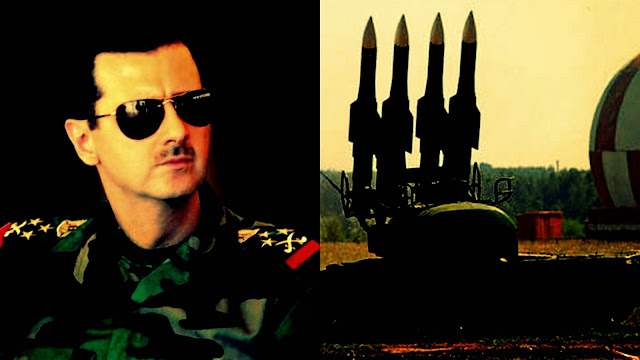 Even though the dictator himself says the bombing campaign in his country isn't degrading ISIS, it's actually swelling their ranks.

Syrian President Bashar al-Assad said in a U.S. television interview that Islamic State of Iraq and Syria (ISIS), which has seized swaths of territory in Syria and Iraq, has been gaining recruits since the start of U.S.-led air strikes against the militant group.

"Sometimes you could have local benefit but in general if you want to talk in terms of ISIS, actually ISIS has expanded since the beginning of the strikes."

So Harper's War could end up helping ISIS instead of degrading it, while also helping their rivals Al Qaeda AND the dictator, which takes some doing and couldn't be more insane.

Canada’s economy stalled in January, as harsh winter weather and the oil shock took its toll on retail and wholesale trade. Statistics Canada reported that gross domestic product fell by 0.1 per cent in January, slightly better than the 0.2 per cent economists had anticipated, but a reversal of course from December’s 0.3-per-cent growth.

And I don't think it's going to work.

His war is too crazy to be popular.

The economy is too much of a disaster to ignore any longer... 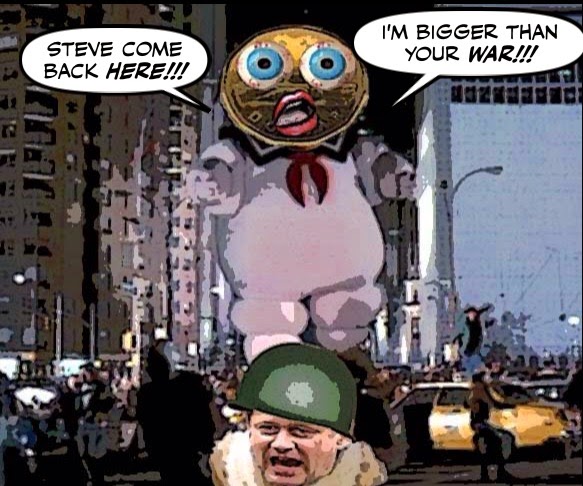 And Stephen Harper will soon find himself running on empty. And more desperate than ever.

For in the end Great Shrinking Economic Leader was left with nothing.

And in the rubble of Syria his fate was finally sealed... 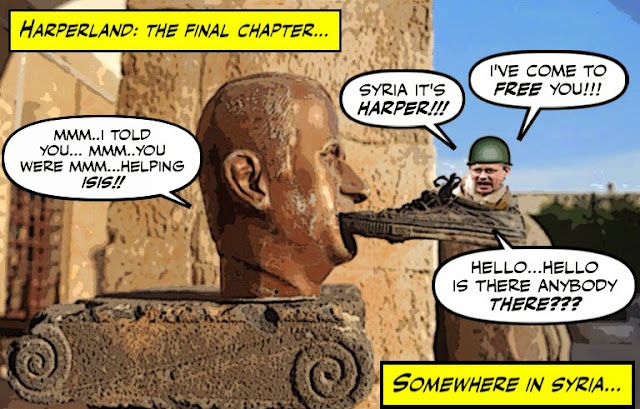