Stephen Harper and the Great War on Women 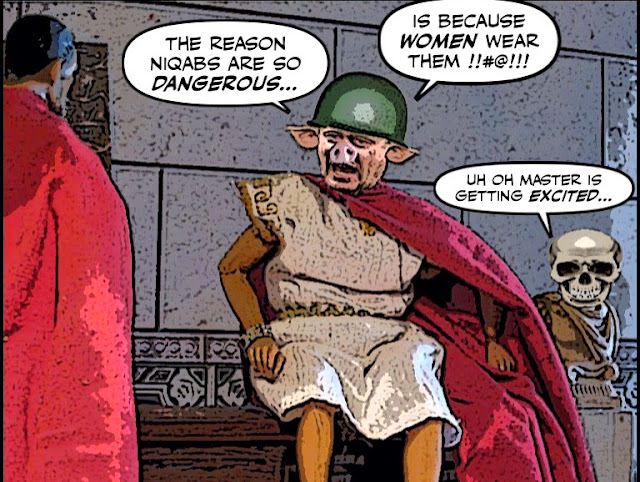 There are so many things I hate about what Stephen Harper is doing to Canada. I hate the way he is trying to scare Canadians into voting for him.

I hate the way he is trying to turn us into a police state with his totalitarian Bill-C51.

Or the way he is murdering our values with his brutish Life Means Life campaign. 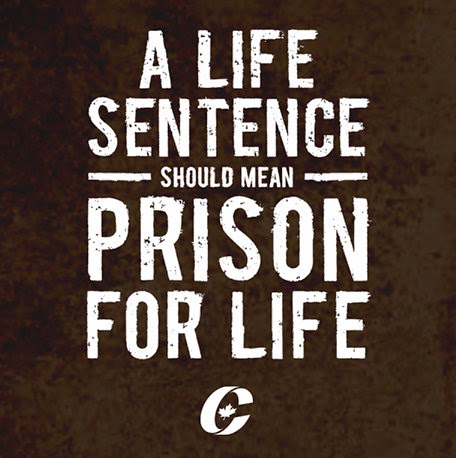 But most of all I hate the way he is stirring up hatred against the small group of Canadians who wear a niqab. While claiming to be a champion of women's rights.

When in fact, as Antonia Zerbisias points out, from the moment he came to power he has waged a never-ending war on women.

For whatever the voices in his head command him to do, he seems to get a kinky thrill out of putting women in their place. It really turns his crank.

His church tells him women should be submissive, so to please it and his rabid base he destroyed a national daycare program, and is using his income splitting plan to help keep them at home barefoot and pregnant 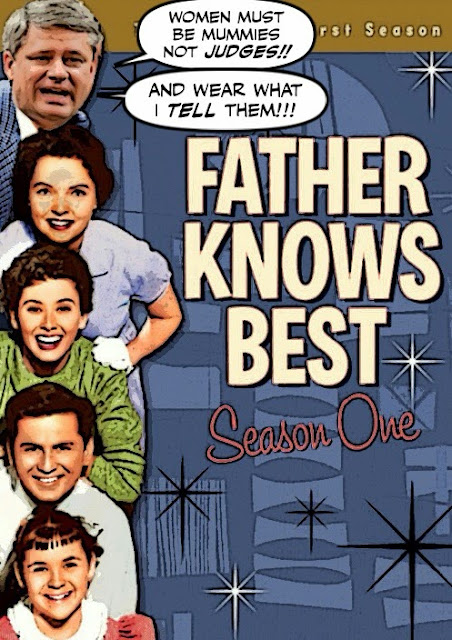 And when women get too uppity he likes to punish them. So now he's bullying another group of women, claiming he's doing it for noble purposes, when he's really pleasuring himself.

And since he also likes to see fear in the eyes of others... 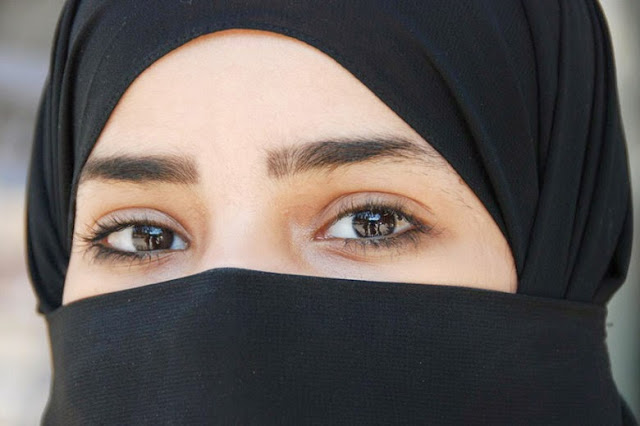 And no doubt many women who wear a niqab are now afraid of being insulted, assaulted, or even murdered in the street.

He must be getting a double thrill, it must be driving him wild with excitement.

And it's all so disgusting and insane, all I can say is thank goodness for Antonia, and this Twitter site. 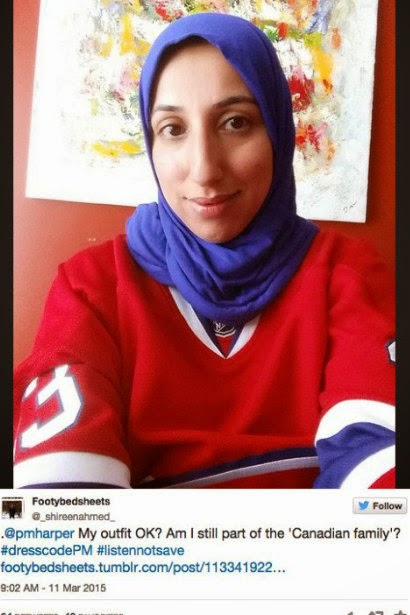 For it is a great way to reinforce our common humanity, stand up for our Canadian values, and show him that we are not afraid.

And of course we can't mock him enough... 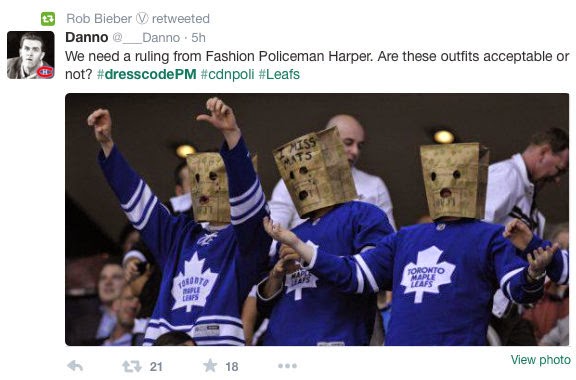 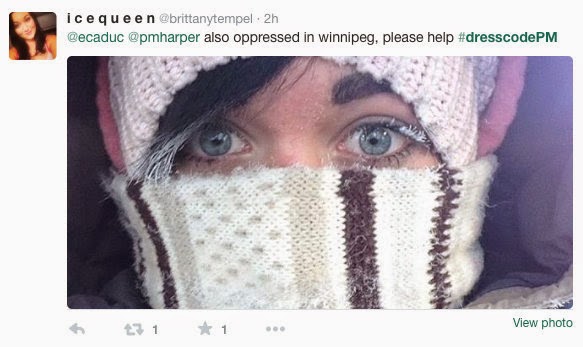 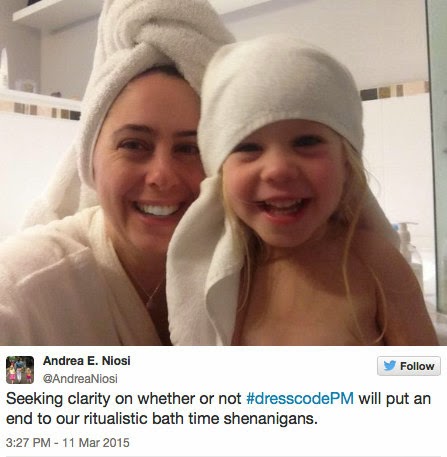 Mock him for trying to scare us into voting for him, mock him for claiming he's standing up for freedom, while trying to turn us into a police state.

Let's show him we are better and more Canadian than him.

And respect all women in this country.

Until the glorious day when we can finally fire that freakish leader... 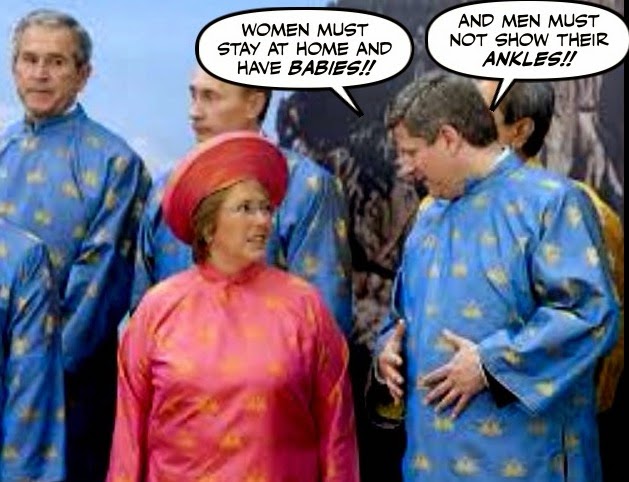 As per people in parkas and mufflers, several times this winter I was thinking we should start up a "spot the niqab" contest.

Personally I'm not keen on niqabs but I will defend any woman's right to wear one. The Canadian constitution gives them that right. Canadian traditions give them the right to wear a niqab.

Harper wants to make this an election issue? He may find it doesn't work. People may realize that women who wear a niqab are only the first. What about women who wear a hijab? What about men who wear turbans, i.e. Sikhs. Come to think of it a lot of Hindi and Sikh women wear scarves around their hair. Is that going to be unacceptable in Harper's version of Canada? Beware because eventually Harper will come for all of us who do not believe as he does, He is a member of the Christian and Missionary Alliance church. They believe the bible is "inerrant" and the second coming is "imminent".

Harper needs to keep his religion ought of my House of Commons, because if he continues on this road, that bible is can be a very scary document and we don't need another version of the Taliban in Canada.

I think we should have a day when all Canadian women wear a niqab and as many men as would like to. One day every year and call it niqab day in honour of women's rights.

Next it will be aboriginal women wearing ceremonial dress! More fear-mongering!

I wish I could download a picture so my words will have to paint it. In the winter when it gets cold out here in BC I wear head gear from Nepal were it gets equally cold it covers my entire forehead top of head and back of head and neck and then I wrap an equally colorful scarf around my face covering my nose mouth and chin exposing only my eyes. So do you suppose Simon that Steve will sick the secret police on me next winter?

What a joke that empty/boy/child/man Steve is, let's laugh him out of office.

No, I wouldn't go that far. Most of the women I know from relevant countries hate the niqab - as well as Harper's dog-whistle politics.

Thank you for writing this. I agree with e.a.f. as I searched "Stephen Harper racist war on women" to find out more about our missing First Nations sisters. However Harper's fear mongering Islamaphobic oppression of our Muslim Canadian sisters is very relevant to the sad state of affairs we call womens rights in Canada! Thank you for your comments on keeping women at home. Sadly for Harper, stay at home moms are just as politically powerful and have just as much fierocity to support resistance as our sisters in the workforce.