Stephen Harper and the Day the Fear Factor Ran Out 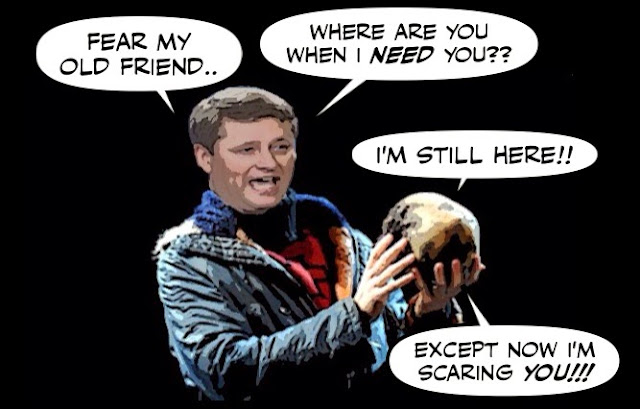 I can only imagine the state Stephen Harper must be in this weekend. Because it can't be pretty.

Not after being he was forced to promise changes to his anti-terrorist bill. The one he claimed, so long and so loudly, didn't need to be changed.

And not after the evidence keeps growing that his war and fear campaign just isn't working.

For that's what I take from this poll and this one.

Not how Justin Trudeau and Tom Mulcair are doing, because I'm basically cheering for both of them, and they'll soon be working together in a coalition government whether they like it or not.

I'm more interested in how Stephen Harper is doing. And in that regard I like what I see.

His negatives are up... 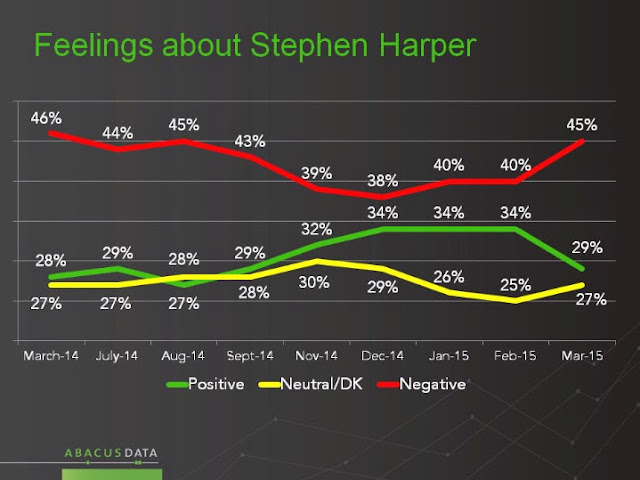 The Fear factor is clearly fading, his campaign is stalled.

The party has stalled (and may actually be falling back), while confidence in direction of the federal government is dropping. Support for the anti-Islamic State military mission — to which Mr. Harper has closely tied his political fortunes — is, as we told you Thursday, beginning to fade. Support for extending the mission is dropping fast and Mr. Harper risks finding himself on the wrong side of this issue very soon.

This, combined with the continued poor performance of the national economy, presents clear areas of opportunity for both the Liberals and the NDP (as well as the Green Party and Bloc Québécois).

And the more he tries to scare people, or beat the drum for war, the more irresponsible or insane will he appear.

And the more ridiculous... 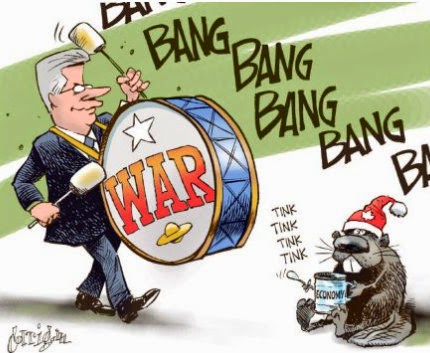 Because the economy will be THE issue of the next election campaign, and after what he's done to it, and where it's going, it won't win him any votes.

And neither will the Duffy trial which begins in just ten days and promises to be HUGE.

The Ottawa courthouse is preparing for an onslaught of spectators at the criminal trial of Sen. Mike Duffy.

The Crown is calling a host of Conservatives on Parliament Hill to testify against the suspended senator, including current and past officials from the PMO. Top senators are also expected to take the stand for the Crown. 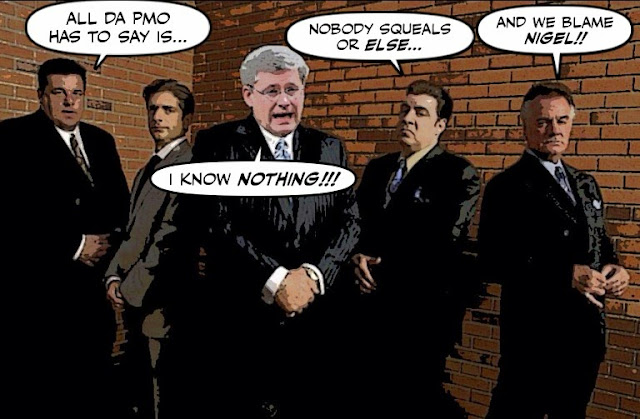 And go on FOREVER.

The trial is scheduled for 41 days. But given the number of witnesses and the volume of documents submitted – there remain hundreds of pages of emails the RCMP have yet to make public in its case against Duffy – the trial could last beyond its scheduled end date of June 19.

And let's not forget that two days after the Duffy trial begins, Dean Del Mastro will be sentenced... 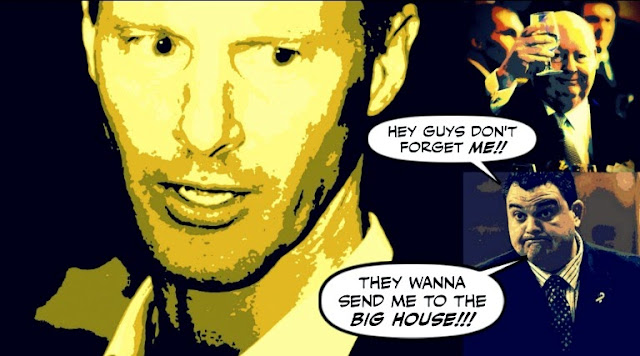 And that should also be quite a show. Double the sleaze factor, and knock a few more points off Stephen Harper.

You know, at the end of a long and brutal winter it is easy to feel gloomy. Or think that this Harperland nightmare will go on forever, as some of the progressives I know have come to believe.

And get VERY annoyed when I dare suggest otherwise. Or throw things at me for being so cheerful !!#@!!

But all I know is that where I live the ice is melting like the dictator... 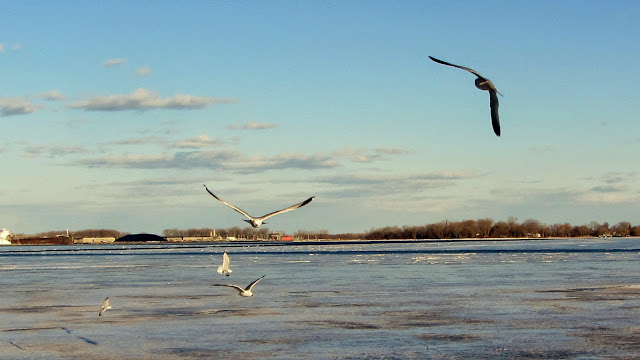 My spirits are soaring at the thought of better days ahead.

And on the eve of my little blog's ninth birthday, I've never been more confident that this long horror show is almost over.

And I can't wait for the final scene... 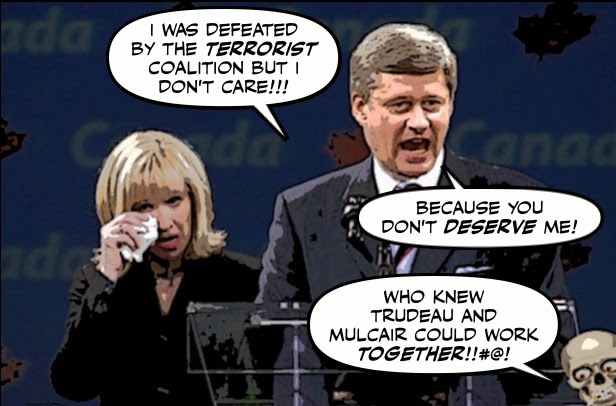 Now won't that be worth waiting for?

Doesn't that cheer you up?

The article about how Iraqi Shia fighters are refusing to fight with the coalition and threatening to shoot down coalition planes has been buried under Word News. Strange it was released late on a Friday. Please everyone read it and let's bring our military home.

This is all starting to stink up the joint, kinda like the Liberals in the past...'
Hopefully, Justin's public actions of quickly disposing of problems will bear out in the future, because still more non-Con sleaze is not what is needed now..

Harper's war which will expand to Syria is another attempt to deflect attention away from his failures at home. As you point out Simon, his fear campaign is weakening and his only hope now is to keep provoking the wannabe Jihadis to attack us at home. This reckless and desperate behavior is befitting a tyrannical, tinpot dictator, not the leader of this great country. I believe Harper is slowly going insane(if not already)and as his grip on power keeps fading, his desperation will lead to even more reckless behavior that will put innocent lives at risk. Let's hope he's ousted before that day happens.

Happy birthday to your blog Simon, it is a gift of hope and a catalyst for positive change. Thanks for your energy, passion, Humour, and dedication.

The Consevative Ice Age is ending. Harper and Company can not melt away fast enough.

hi anon 10:21...yes as I said before I will use that in the next post I write about the war. That may take I while though since I am absolutely sick of having to talk about war all the time, when there are so many other urgent issues that need to be discussed. And Harper is hoping his war will distract us from them...

hi anon 5:06pm...yes as I said this war is insane. The Shia militias who are largely responsible for driving the relatively secular Iraqi Sunnis into the arms of ISIS with a whole series of atrocities, are now are best chance of defeating them and stopping their atrocities, while no doubt committing others. And they are backed by Iran who the Harper regime never stops attacking, while embracing the Saudis, who are practically the nexus of terrorism. As the doctor in the Bridge Over the River Kwai says at the end of that movie "madness....madness..."

hi mizdarlin...I'm not quite sure what you're talking about, but you're right this whole Harperland stinks, and that government has never sunk so low....

hi anon...yes it is as you say just a distraction, and I honestly believe that the man is so desperate he is capable of anything. He has nobody to put the brakes on him like his old buddy Nigel Wright used to do, his young fanatics only encourage him, so he's basically out of control. But the good news is that I don't believe this crazy act can be sustained for long. So he has dug himself a hole that hopefully will be very hard to get out of. If Canadian don't recognize a desperate maniac when they see one, then they will deserve the leader they get, and this country will become a mad house...

hi Bill...thank you, I appreciate your kind words and your encouragement. I might write something about the blog before the weekend is over, But if I don't I just want to say that it is the support of readers like you that has kept me going for so long. And yes, I am really looking forward to the day our crazy snowman melts, and we can get our good old Canada back...