How We Can Help Defeat Stephen Harper's Fear Campaign

As you know, I have a dream. One that I hold tightly to my chest in this dark Harperland, where hope goes to die.

The dream of defeating Stephen Harper and his foul Cons who are trying to scare Canadians into voting for them.

By helping to create a Great Stop Harper movement, and using hope to conquer fear.

So I was glad to see Bruce Anderson ask this question: is it too much to ask our politicians to inspire us?

In contrast, George H. W. Bush, the only one-term president of the last five, lamented after the fact that he didn’t put enough thought and effort into what he clumsily referred to as “the vision thing.” The lesson he learned was that it matters, and that being able to articulate it is critical to successful leadership.

Because the "vision thing" is critical. This is no ordinary election. It's a battle for the very survival of what's left of our Canada and its values.

And although Anderson is a little naive to suggest that Stephen Harper could ever inspire anyone.

Or lift his snout out of the gutter... 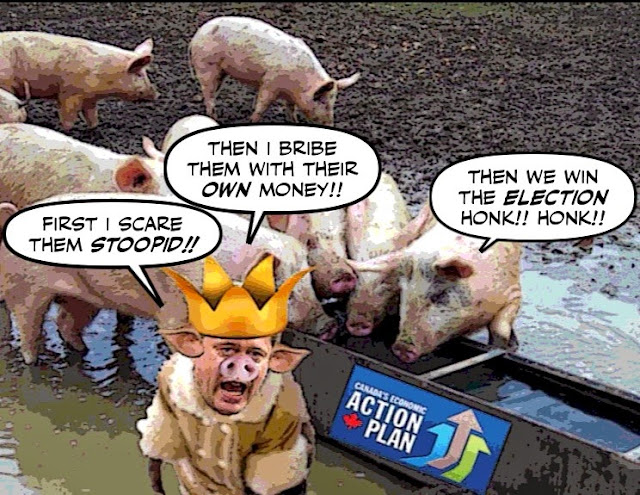 Fighting Harper's fear campaign, without offering a nobler vision to make him look even more like a hog by comparison, is a dangerous game.

And Anderson is right about this:

Opposition parties are naturally tempted to spend much of their time campaigning about the blemishes and errors of the government. It’s a natural extension of the work they do every day. You develop a head of steam about the things that have offended you, have raised money, and rung the bell of the Prime Minister.

But there’s a vacuum to be filled. It’s rare to hear leaders talk about dreams, except maybe how to avoid a nightmare.

Our progressive leaders may be fighting Harper and his Con gang as hard they can in places like Question Period, but they are not doing enough to inspire us. They are thinking too small, at a time when our marching orders should be go big or go home.

We can be happy that we have three distinct choices. But the conversation can feel more like a “what do we need to do” list than a “who do we want to be” list. More about means, less about ends.

And that could be disastrous, because in a country as complacent as this one, if you do not inspire them many Canadians will not vote. Especially the young, who are already alienated from the political process.

So it really is time to go bigger:

The rewards of good pugilism are instant and satisfying. But it could well be that the best way to break out, to find momentum, to set the political agenda, would be to imagine a future that is less about responding to threats, fixing what’s gone wrong, or improving things at the margin. More about what leadership can inspire, when at its very best.

And the best way to do that, is to build a movement to nudge our political leaders in the right direction, give them the courage to stand for real change. And in the process inspire more Canadians to vote for them.

Because it does work, I saw it with my own eyes in Scotland last summer... 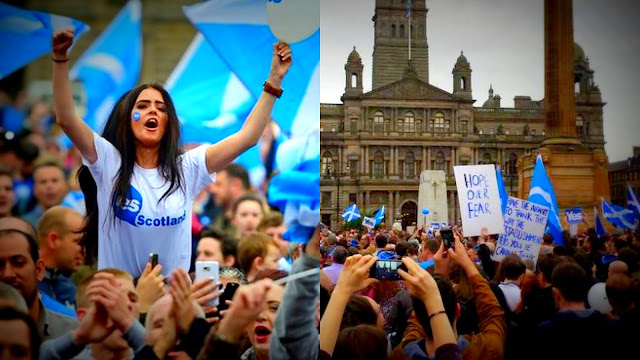 Where the YES side built an awesome movement, which although it did not win them the referendum.

And ended in tears for me and so many others... 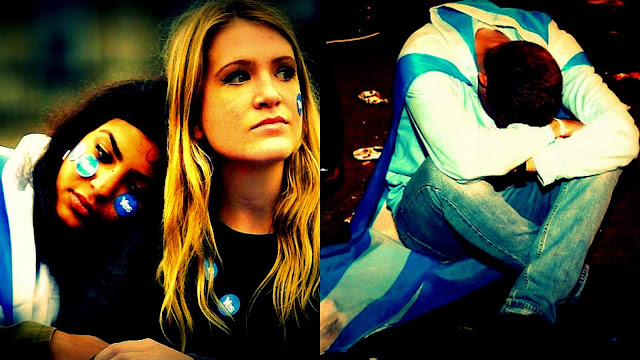 But because that movement inspired so many Scots with its vision of a kinder, gentler, more left-wing country the dream did not die. And polls now suggest that the Scottish National Party is heading for a historic breakthrough in the upcoming British election.

The poll by Lord Ashcroft – which is of a series of parliamentary seats across Britain – indicates that the SNP, led by Nicola Sturgeon, could win 56 of Scotland’s 59 parliamentary seats, according to the veteran polling analyst Mike Smithson. This would virtually wipe out the Labour party and the Liberal Democrats north of the border.

The projected success of the SNP would almost cancel out Labour gains in other parts of Great Britain, producing a dead heat between the two main parties on 7 May, according to Ashcroft’s projections.

A breakthrough that could give the SNP the balance of power in the Westminster parliament, send the brutish Cameron Cons packing, and with its anti-austerity platform set the whole of Britain on a new and better course.

And guess who is largely responsible for powering that surge?

According to Lord Ashcroft and several other pollsters it’s 18-24 year olds that are one of the main driving forces in these landmark opinion poll figures.

Many of them cast their first ever vote in September for ‘Yes’ and are now moving to the SNP as electoral politics in Scotland becomes divided first on the constitution and second on economy.

Yup, the young. Because if you inspire them they WILL get involved.

And the way they and others were inspired, was with a shining vision of the future, a grassroots movement that had to be seen to be believed.

And with political messages as beautiful as this one... 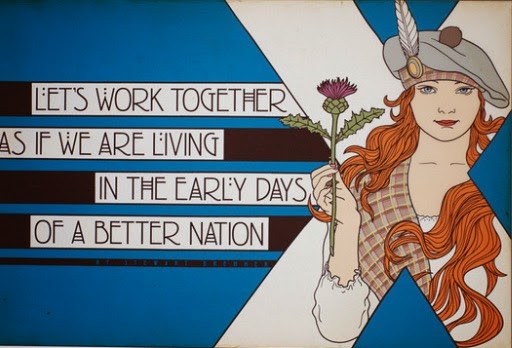 And the best news? That slogan comes courtesy of the Canadian writer Dennis Lee.

Let's work together to build a Great Stop Harper Movement... 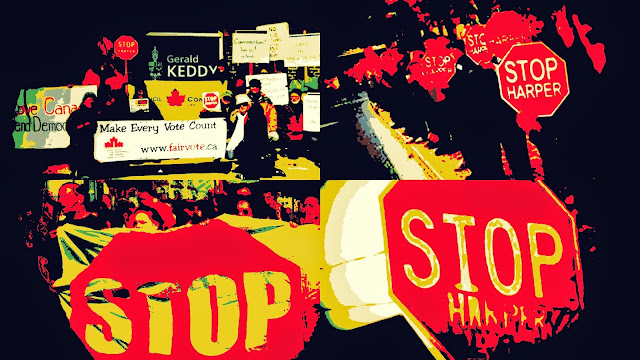 Let's conquer his fear with our hope.

And take our Canada back.

Oh yeah, one more thing, I'll be at Edinburgh Castle later this year.

To watch little Scotland help lead the world towards a better place...

Come on Canadians. Tell the dictator we are not afraid.

And show the Scots if they can march bravely towards their destiny.

I don't know if I told this to you Simon already [my memory is fading at my tender old age] but there is a wonderful movement out here in so-called Beautiful British Columbia where people paste a Harper-con bumper sticker named simply "Harper" right underneath the "STOP" on the stop sign...

Cheers to you buddy,
Mogs Moglio

One problem with that is that ALL of our political parties have drunk the kool-aid and believe we can't afford dreams. They all want to be "sensible" managers of austerity.

And then the Cons and the Libs plunge head-first into budget-busting imperialist wars and tax-cuts for the wealthy.

Another movement could be placing a Liberal and NDP logo beneath a Merge sign. Harper would probably retaliate with a picture of himself with To Me written beneath it, below a Yield sign.

I called it a month ago. Haper lied and now a Canadian has died in vain glory.
http://thinkingaboot.blogspot.ca/2015/01/harper-lied-and-unnecessarily-canadian.html

hi mogs...I'm glad to hear that. The more we can get that message out the better. I've got one in my front window, and I'm consulting my finances to see if I can afford a giant banner... ;)

hi thwap...yes I know, as I pointed out in my post it is small thinking, and a total failure of the imagination. But as I also pointed out it did work in Scotland, the Scots are a lot like Canadians. And whatever anyone says creating a movement could improve our chances of winning the next election. And those who ignore the obvious will pay for it sooner or later...

hi Steve...yes it's true, he placed our soldiers in danger for crass political purposes, are now they are paying the price. I am not opposed to having troops kill as many ISIS crazies as possible for I loathe those genocidal bastards with every bone in my body. But I also loathe liars, and the Cons have been lying to us and parliament from the moment the war began...

hi Kathleen...thank you, you're welcome, I'm glad you liked it. I am not about to mope about the present situation like so many I know. I'm a fighter from the highlands, and the more desperate the situation the harder I fight. It's a 1000-year-old family or clan tradition. So I can't help myself...;)

Bless you Simon Bless you...