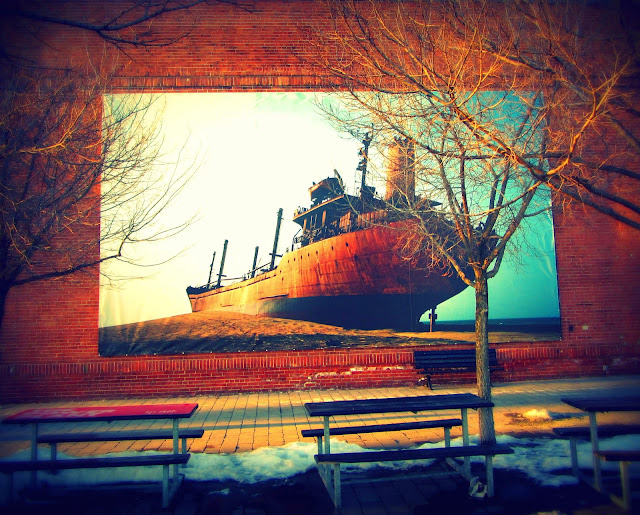 The snow is finally melting on the waterfront. If I close my eyes and feel the warm sun on my face, I can almost dream that Spring is here at last.

Which is a good thing, because there isn't much else to celebrate in Canada these days.

Not when the country is as beached as the boat in that painting. Looking grubby and going nowhere.

And not when its depraved leader Stephen Harper is using fear as a political weapon.

First we had Canada’s New Government. Then we had Strong and Stable Government. Now we have the Be Very Afraid Government. As even casual observers of the news will know, it’s all fear, all the time in Ottawa these days. 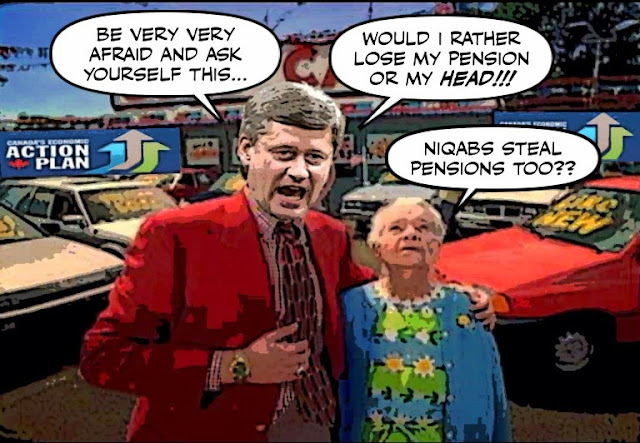 The political premise is slightly disturbing — that terror and crime can be tackled as another marketing challenge, complete with labels, postcard surveys, and mind-numbing repetition of slogans. The potential payoff, presumably, is the re-election of the Conservative “brand.”

Not when so many Canadians are still buying it, according to this latest EKOS poll... 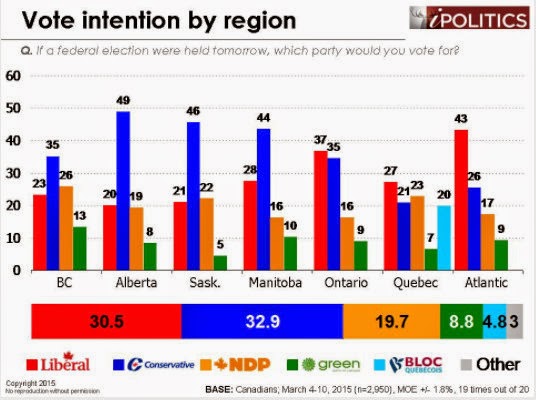 And not when another EKOS poll suggests Canada is becoming more racist.

It may not be particularly insidious but it is racial intolerance — and these numbers should alarm anyone who believes in an open and tolerant society.

And yes it is all about the Great War on the Niqab... 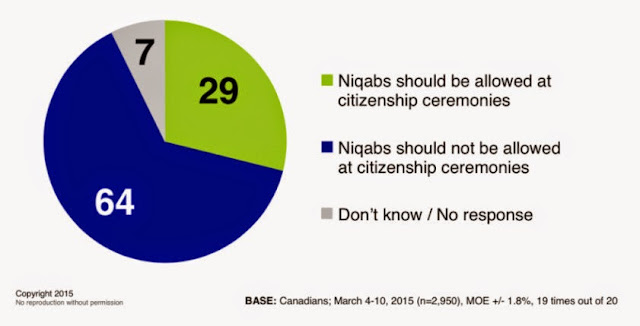 Because not only has Great Bigot Leader been able to feed his rabid base a bloody bone. He has even been able to sucker some progressives into believing that absurd little issue should be THE issue of the campaign.

So for a piece of cloth that some women wear on the heads, a country could be lost.

And get the leader it deserves... 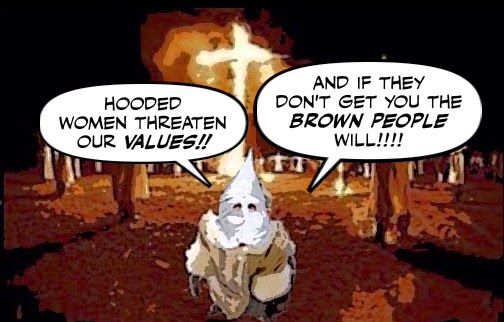 And I must admit that after absorbing that thought, for the first time in a long time I felt really discouraged. Because that's not the Canada I know and love.

And I would rather leave it, than watch it rot from the head down.

Until I remembered that all of this foulness is only being manufactured because Harper and his fear mongering Cons are desperate.

All they've got left is their Great War on the Niqab, and their porky politics of fear... 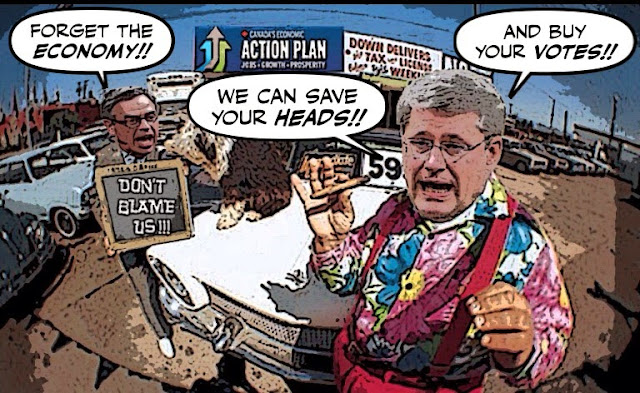 And that this is also true:

Even seasoned marketers know that repetition has its limits. As far back as 1970, the University of Toronto’s Daniel Berlyne produced research showing that repeated exposure to novelty in advertising breeds familiarity at first, then boredom or contempt — the “two-factor” or “wear-in, wear-out” effect.

By marketing wisdom alone, then, this all-fear approach in the current political climate is a risky gambit. Sustaining the nation in a constant state of fear, all the way through an election months away, is a tall order for a government that may have its own wear-out concerns after nearly 10 years in office.

The fever will break. The fear will fade. The disastrous state of the economy will become THE issue.

And hopefully before the winter is over, reality will hit him in the face...

Hopefully more Canadians will realize to what dark place that diseased bigot would take us.

And yes, this Canada I still recognize... 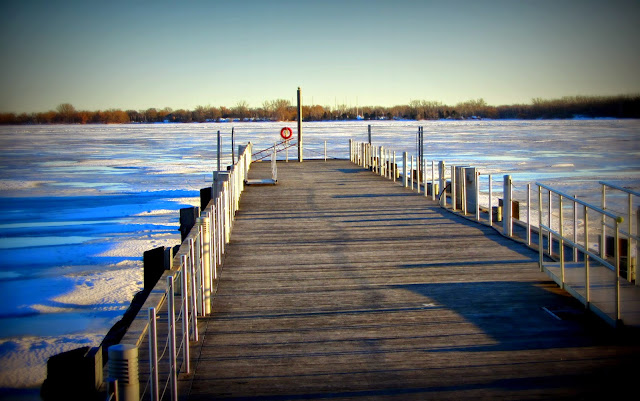 It has been a long winter of the soul.

But the ice is finally melting. It almost feels like Spring.

And better days ARE coming...

Labels: bigotry, racism, Stephen Harper, The End of Con Canada, The Great War on the Niqab, The Politics of Fear

I had realized for years just how despicable Harper was but his niqab comments and then that fool,Diane Ablonsky's despicable harassment of a witness at the C-51 hearings was still a bit shocking.

I really hated Mulroney but he had some ethics (I think) and his opposition to apartheid was a redeeming feature.

It is sad to see how the Tories have descended to being the Harper Cons with the mps apparently a bunch of trained poodles, (sorry that maligns poodles), with no morals or ethics what-so-ever.

George Carlin may as well be talking about Stephen Harper's Canada...

The sun is presently shining brightly here in NS, however, we have been forewarned of another big SNOW STORM heading this way. I've been out to the store for milk etc. , so bring it on!

Yes! I know what you mean, Simon. It has been a long winter of the soul! Thank God I do have a means of communication........although I do have several books to get read in case we lose power!

According to Video Rebel's Blog, a Global Recession will hit us in September and then we will all be in the same boat........sorry to dampen your spirits! Cheers for today.......one at a time!

As the partner of an African-Nova Scotian, and father of a biracial child, I'd argue Canada's racism isn't so new.

With Harper's ex security boss/chauffeur running spies out of the Lebanese embassy and trading girls into ISIS territory I think he had better rethink our strategy. Does Harper think he is James Bond or our chief spy master. He must have planned this fantasy world when he appointed this man to the ambassadorship. A bit off topic but you haven't touched on this subject yet. I have a half aboriginal grand child and he is very bright and I think he has to go to school in Vancouver or one of the more racially tolerant cities. On the west coast preferably. When his parents were thinking of taking jobs in rural Saskatchewan I was very unhappy but they realized it was not a wise thing to do.

Spring is here already in the interior of BC Simon hang in will be there soon. The trees here are already budding and the temperature is awesome. I don't mean to make you jealous that is not my point I just wish to give you hope because spring for you is just around the corner.

And get Daffodils to cheer up your home eh? I have them and other flowers in mine. It is good very good for the emotional body to have those colorful flower beings around.

Thank you for sharing! George Carlin was "right on the money" on everything he talked about. RIP George.........but, then again, he has probably rolled over in his grave a few times!

As a homage to Elmer Fudd, let's change the "Be Very Afraid Government" to the

hi jrkrideau...It really is a appalling spectacle isn't it? I've never seen anything fouler and more disgraceful. If only for what they are doing now they deserve to be removed from office. As for Mulroney, he certainly had his flaws, but even he was more decent and more Canadian than Stephen Harper. And if I was a conservative I would be very upset with what he has done to that party...

hi Liberta...thanks for that link. I had forgotten how eloquent and how prophetic George Carlin was. That has to be one of the most eloquent political clips I've ever heard. How much we miss him...

hi Kathleen....Lordy. I should have known better than to write about how the weather is improving here, or moan about our winter, after the Snowmageddon you poor people have experienced this year. I have relatives in Maine so I know how bad it has been, But think of it this way, you are REALLY going to enjoy your summer... ;)

hi Omar....you're right, that wasn't a very good headline. I was tired. What I meant to say is that I am shocked by the fact that we were making such good if not perfect progress, and now we seem to be going backwards. It's incredibly distressing to me, and I only hope we can regain our sanity, so your beautiful child can be assured of a bright future. You know, I think I fight pretty hard, but if I had a child I'd fight even harder....

hi Mogs...oh great rub it in. I have a very good friend and when he tells me what a great winter you've been having, I'm glad I'm not on Skype so he can't see me turning green with envy ;)
But yes daffodils, or any flowers for that matter, do help brighten things up. I'm afraid I'm not a very good gardener, although I did create a most fantastic patch of milkweed on the island to help feed the monarch butterflies. And although only a few of them came by last summer *sigh* I'm hoping for better this year...

hi David.... You mean the Adventures of Bugged Bunny? The story of the monstrous jumping creature who came out of his hellish hole and tried to eat Canada. Yes I can definitely see that. Just the bizarre combination of extreme fear and extreme fascism should make it unique... ;)

@ Liberta your George Carlin link is priceless the title could be substituted "The Canadian Dream" eh?

Cheers to you,
Mogs Moglio