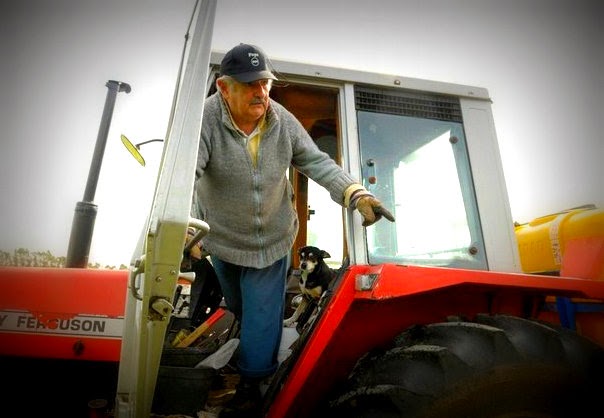 In a world groaning under the weight of poverty, ignorance, and war, it's hard to imagine how we will ever solve all our problems.

Or even save the planet from destruction.

In a world full of grubby self serving politicians, it's hard to find a political hero.

But I do have one, and his name is José Mujica.

There are idealistic, hard-working and honest politicians the world over - although cynics might argue they're a small minority - but none of them surely comes anywhere close to the outgoing Uruguayan president when it comes to living by one's principles.

He was shot six times, he spent thirteen years jail, two of them at the bottom of a dry well, and most of them in solitary isolation.

But the fascist military regime couldn't break him.

"I've no doubt that had I not lived through that I would not be who I am today. Prison, solitary confinement had a huge influence on me. I had to find an inner strength. I couldn't even read a book for seven, eight years - imagine that!"

He legalized abortion, gay marriage, and marijuana. And he will always be remembered as the humble leader with grand ideas. 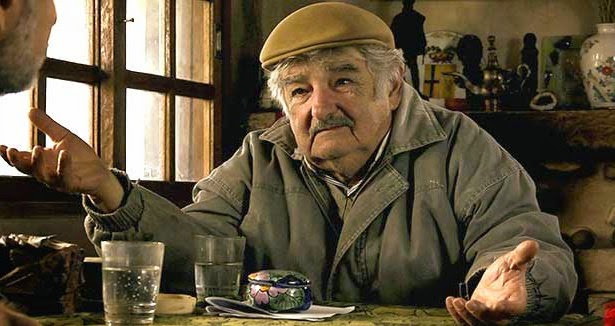 "Politics, which should rule human relations, has succumbed to economics and become a mere administrator of what the financial system does not control."

"My definition of poverty is the one we owe to Seneca: It is not the man who has too little, but the man who craves more, who is poor."

You know, people are always criticizing the young for not turning out to vote in the numbers we need to help build a better country and a better world. And they are right to do that.

But if the young had leaders like that one to inspire them, I'm sure they would flock to the polls in numbers never seen before.

And the best news? That grand old man isn't giving up the struggle.

Mujica, who is sometimes described as the "president every other country would like to have," dismisses all the adulation and attention with a waft of his hand but he is not leaving the stage just yet.

"I have no intention of being an old pensioner, sitting in a corner writing my memoirs - no way!" he barks at me with a grin. "I'm tired of course, but I'm not ready to stop.

May he live forever... 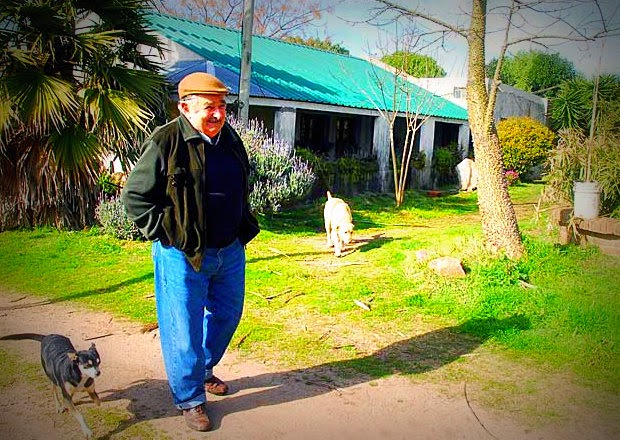 Along with Manuela, the three-legged dog! (At left in the photo).

For those who read Spanish: http://mypets.com.uy/nota-detalle/13/manuela-la-mimada-del-pepe-mujica

By the way, she lost her leg in a farm accident, as often happens (to humans and other animals).

He is my hero too. Sara-Anne Peterson

Thanks for this, Simon. he's always been a hero of mine, the epitome of what a people's leader should be... a humble man who refuses to take all the slavish media hype seriously, and makes himself even more of a hero by his positive energy- his three legged dog makes him seem even more wonderfully human, if that is possible.
If only we could bottle this and feed it to every elected politician, what a nice world this would be...

My friends in Argentina and Chile wish their purported leftwing presidents were more like Mujica (and his companion Lucía Topolansky). Cristina Fernandez is known to aspire to queenly trappings, and Michelle Bachelet, is just not very left; a pallid "social-liberal". Problem is, the largest opposition force in both those larger Cono sur countries is very rightwing indeed, and there are even ties to the bloody dictatorships.

Manuela has a song:

hi lagatta...I knew I should have mentioned Manuela ;) But yes, what a great guy, and being a dog lover makes him even better, if that's possible. I visited Uruguay when my parents lived in Brazil, and its a beautiful little country...

hi Kathleen...my reaction exactly. And what amazes me the most is that like my other hero Nelson Mandela he was able to put the bitterness behind him, and preserve his humanity. I try to model my life after people like that, but sadly I still need a lot of practice... ;)

hi Sara-Anne...yes it's hard not to admire a man like that. In fact I have to admit, that if I ever met him I would not be able to resist giving him a huge hug...

hi mizdarlin...you're welcome, I couldn't let him step-down without marking the occasion, and I only wish we could clone him, Because you're right, this world needs more leaders like him, if we are going to be able to save it...

hi lagatta...yes some of the other Latin American leaders are not as great as Mujica, but the big picture is that they they have done more to fight poverty than any other leaders in any other region. And it's the greatest collection of leftist guerrillas in power I have ever seen. The man who will replace Mujica has been President before, and he's a very respected doctor so that's good. But then Uruguay has a very interesting history, and it brought in medicare and free education long before so-called developed countries like Canada. The country is dotted with worker vacation colonies that they started building way back in the 1920s. I highly recommend the place, and it's BBQs are like no other on earth...

I've never been to the Cono Sur, and I have several friends from those three countries; some living there, some in North America or Europe. One of my Argentine friends, from Buenos Aires, LOVES Montevideo, as it reminds him of his own city when he was a little boy, before it became too gigantic and some of the beautiful architecture was destroyed for bland international-style office buildings.

Oh, I wasn't trying to put down either Cristina or Michelle, to say nothing of Dilma Roussef in Brazil. They all have either personal or family histories of fighting the bloody dictatorships (Bachelet's dad was killed by the fascists in a car bombing). Just saying how much my friends admire Mujica, Topolansky ... and Manuela. There were a lot of anarchists in the early days of Uruguay, who brought a very "social", mutual-aid grounded ethos and a love of liberty from Italy and Spain. Uruguay was also an early country to recognize women's rights. All of those countries have indeed done a great deal for poverty alleviation, and although Roussef has done some things we might criticize, given the size of her country's population and the huge income differential there, she has done more than perhaps any other leader to free millions of people from dire poverty. There is a form of guaranteed income there. For families, it is conditional on the kids (including teens) attending school, to break the cycle of poverty and the lure of a gangster lifestyle and get more kids from poor rural areas and urban slums into university and skilled trades.

A close friend of mine from Argentina is down there now (she is retired so she can take the time off) and hopes she can get over to Uruguay.