Why Bill C-51 Will End Up Hurting Stephen Harper 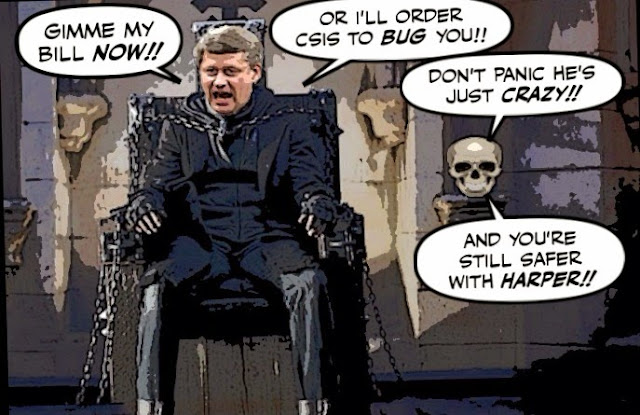 They say Stephen Harper is fit to be tied, or restrained.

He can't stand the idea that his monstrously flawed anti-terrorism bill C-51 is going to take weeks, rather than a few days to study in committee.

And what must be driving him absolutely crazy is the thought that with every passing day more Canadians are coming forward to call his bill bad and dangerous.

More than 100 academics are urging the government to drastically alter C-51, the Conservatives' proposed anti-terrorism legislation, arguing it is far too broad and doesn't come with safeguards to protect Canadians' privacy rights.

One that would not only threaten our privacy rights and our freedom of speech, and turn us into a sinister surveillance state.

But could also make us more unsafe rather than safer.

The question is whether C-51 will make Canadians safer or whether it might inhibit the work done by intelligence and law enforcement officials, said University of Ottawa Professor Craig Forcese.

In an interview with CBC Radio's The House, to air Saturday at 9 a.m., Forcese says the bill chills speech, deters participation in counter-violent extremism programs and sets up a "brave new world in terms of what the Canadian Security Intelligence Service (CSIS) can do. 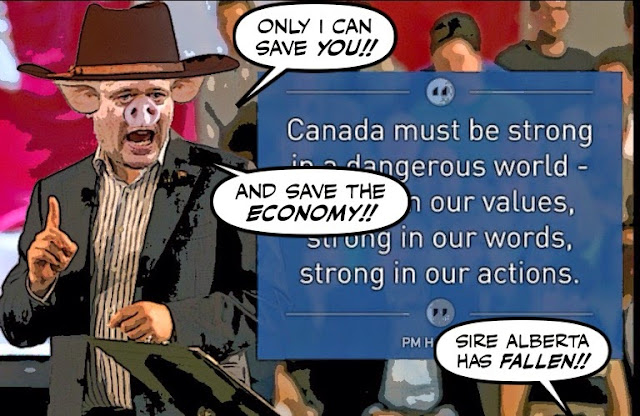 By among other things undermining de-radicalization programs.

"De-radicalization outreach programs could be negatively affected" because those programs depend on frank discussions between the RCMP, communities and parents of those at risk of radicalization, the academics wrote. "The RCMP may cease to be invited in at all, or, if they are, engagement will be fettered by restraint that defeats the underlying methods of the program."

Even though experts agree they are one of the most effective ways of dealing with the threat of homegrown terrorism.

And what must be bothering Stephen Harper the most is that with all that negative media coverage, even the most complacent Canadians will start to wonder about what kind of society their Great Leader or Big Brother would have them live in... 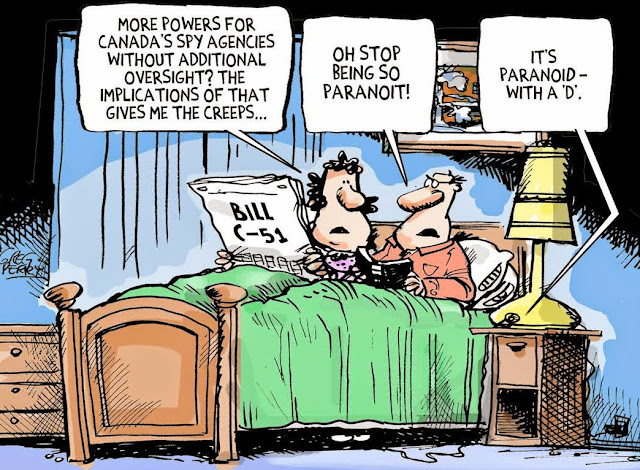 And to make matters even worse even his own Con base might also start to get paranoit... 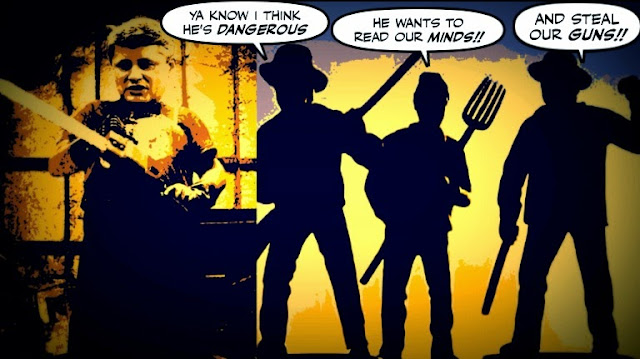 Which explains why he is so desperate.

So desperate to scare Canadians into submission, that he would send his hapless stooge Rona Ambrose out yesterday to trumpet his terrorist message,

Federal Health Minister Rona Ambrose made an unexpected leap Friday from talking about health-care innovation to fears over the threat of the Islamic State.Ambrose was discussing health care in a speech to the Calgary Chamber of Commerce when she abruptly changed topics.

"We're also proud of our record of making careful, principled choices reflecting the values of Canadians whether it's economic and financial security or creating and protecting jobs but also keeping Canada and Canadians safe in a dangerous and an uncertain world," Ambrose said.

You know Rona, the Village Idiot...

Now does that make you feel SAFER?

Or make you feel like doubling your health insurance, or wonder since she's supposed to be the HEALTH minister whether our hospitals will be there when we need them.

But of course the main reason Stephen Harper can't win the battle over C-51 is because after all the negative publicity it will have received before it becomes law, when he passes it anyway.

Or rams it through like a hog in heat... 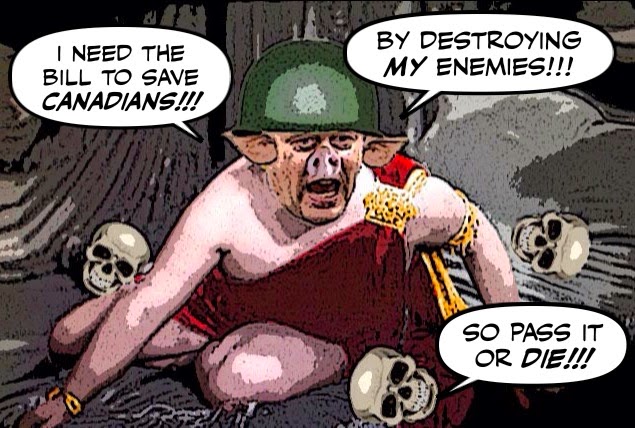 He'll look even more dangerous or more like a maniac, and we will use that against him in the next election.

Poor Great Leader. He thought he could use his foul bill to scare us into submission and destroy his enemies.

But he ended up scaring Canadians more than the terrorists.

And the bill came back to destroy him... 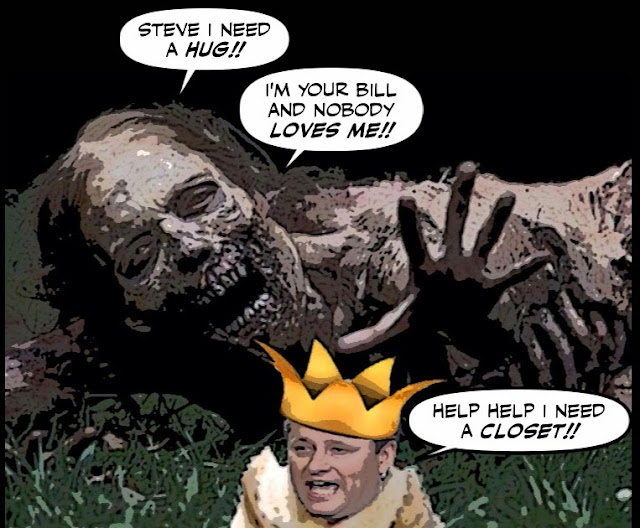 In Ottawa Simon there is no particular "Village Idiot" because every con clown takes turns that and being sentenced to a jail term. Ho hum they are boring the fuck out of me.

Oh sure give away our precious natural resources let no Canadian profit from that except Harper's friends and then announce that you are a great [but lying] economist. Strangle Canada then move on to be a fear monger because your economy 'black magic' failed miserably and Steve you are a hatred loving bastard eh?

If the Prime Minister came out publicly and announced he was passing a Bill that would allow him to murder the occasional first born Muslim child on a whim, Canadians would complain and politely blog about it, but wouldn't actually do anything.

Canada is now full of cowards and Nazis.

There are plans in BC to build new pipelines to ship diluted bitumen offshore.
Tanker traffic would be greatly increased, through Vancouver harbour, and on the west coast.
A major tanker spill would be devastating, not only to the environment, but to local economies.
Proponents of pipelines could then be in contravention of Bill C-51, if passed as is.

hi Mogs.. I made that Ambrose button years ago, so I couldn't resist using it again. And let's face it, she may have many challengers, but she definitely deserves it for bringing the War on Terror into a medical conference. Let's face it, we're dealing with incompetent maniacs, and goodness knows what they might do next....

hi Morlock...I don't think they would go that far, but there is an extraordinary amount of fear and naked bigotry in the air, and it is both frightening and disgusting....

hi Hugh...I haven't the slightest doubt that a major aim of this flawed bill is to try to intimidate and if necessary arrest anti-pipeline activists. That RCMP report that was released recently made that absolutely clear. And it is deeply disturbing...

hi Hugh...first Rex Murphy and now Conrad Black, it's shocking but I'll take it. It shows that opposition to the bill spans a wide political spectrum. And that's bad news for Harper....

hi jolly roger...well my reaction is similar but different. I close my eyes, cover my ears with my hands, and shout: "God help me !!! Not the Village Idiot !!! Not Rona again !!!! " But yes, how much more of this Con clown show must we endure?

This legislation is such a joke. I know plenty of Albertans who don't buy it to be honest. If the security Harper wanted to introduce really matched the level of hysteria he is trying to push on Canadians, his beloved oil sands projects would be crawling with security. They simply aren't. In fact it's so easy to smuggle an illegal substance in to work its rather ridiculous. There are A LOT of things there that don't react well to any sort of explosive device. I expected to see a lot more security there but there simply isn't and no Conservatard can convince me that security is as dire here as they make it out to be.

Yep....thanks to the High River Gun Grab....southern Alberta already thinks we are headed for a police state.

Harper is just confirming it.

Lots of unhappy mumblings in Alberta....