Stephen Harper and the Hypocrisy of Great Warrior Leader 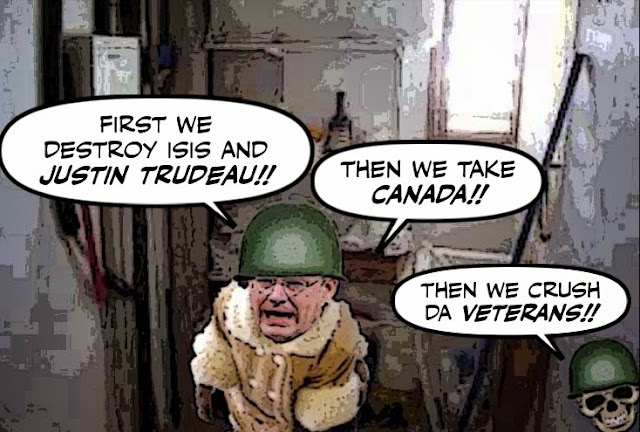 As we all know Stephen Harper is trying to make us believe that we are at war with a giant Jihadi conspiracy.

And that only he can save us from those who would behead us in our beds, and Justin Trudeau and Tom Mulcair.

Because only he is a Great Warrior Leader.

And in pursuit of that absurd illusion he is clearly willing to do or say anything.

Prime Minister Stephen Harper has accused the Liberal leader who aims to replace him of harbouring a "deep distrust" of the Canadian military.

"I do think Mr. Trudeau's comments around the time of the [Iraq] debate indicate a deep distrust and, frankly, dislike of the Canadian military that I think runs very deep in some elements of that party and with him," Harper said at one point in the exchange. "And that's up to him to explain."

Even portray himself as a friend of the military, after slashing services for veterans, or spending a fortune fighting wounded soldiers. 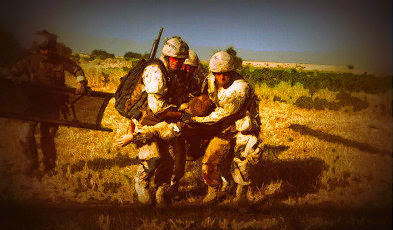 The Government of Canada has spent nearly $700,000 on its defence against a group of seven veterans who were injured in Afghanistan, a sum that one military advocate calls “unconscionable.”

In their statement of defence, lawyers for the Harper government argued that it is unfair to hold it accountable for decisions made by lawmakers a century ago, and that Ottawa has no special obligation to wounded veterans.

Can you believe that? Some Great Warrior Leader, some great friend of the military.

Who rather than asking Justin Trudeau why he hates our soldiers so much.

Should instead, as Rick Mercer points out, be asked to explain HIMSELF...

And the good news? If he thought that replacing the ghastly Julian Fantino with Erin O'Toole would fix the problem, he can forget about that now.

Asked about the optics of spending such a large sum of taxpayer money to fight the veterans in court, O’Toole replied: “I wouldn’t, you know, want to be seeing any veteran who’s disappointed to the point of going to court.

“As a former lawyer, I think court has to be the last resort for anything.”

Because O'Toole is as I predicted just another pathetic Con tool... 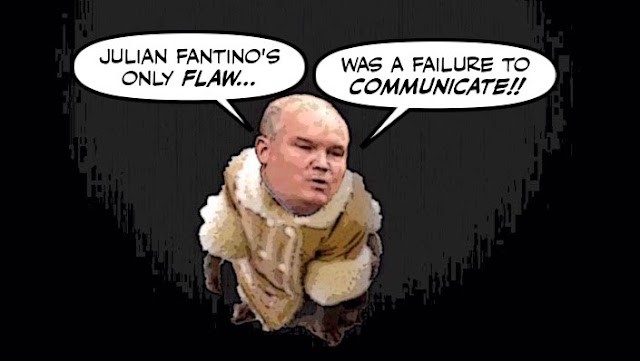 The president of Canadian Veterans Advocacy, Mike Blais, is calling on the government to negotiate a settlement rather than pursue the court case any further.

Blais said if the government does not change its relationship with veterans, including scrapping the lump-sum payment, veterans “will engage” in an anyone-but-Conservative campaign during the upcoming federal election.

And he will pay for it in the next election campaign.

The more the world changes, the more it stays the same... 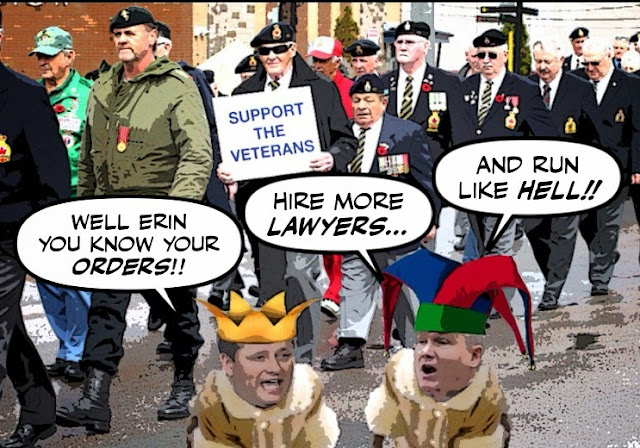 Well put Rick Mercer and Montreal Simon. I am disabled as well and even though I have PWD [Person With Disability] status in BC have worked all my life and paid the system by paying into EI CPP Income Taxes federal and provincial. I was informed by the BC government they no longer want to help me they want me to get federal CPP Disability aid. So the Feds turned me down and I fought them and they lied to me about their own policies and denied me any help what so ever. And further more even though I had legal documents from my family physician and my orthopedic physician they wanted to make me prove all over again that I was indeed disabled.

Stephen Joesph Harper has turned the so-called civil servants into a gestapo like organization who are afraid to lose their jobs if they actually do them. Disgusting.

Military should stand up and say they have no particular obligation to Canada.

Of course they won't say that, because they don't feel that way, but I'd love for the Cons to feel as vulnerable, exposed, and helpless, as injured vets.

Sorry to hear Mogs. Truly I thank you for your past efforts. I do not have the guts or discipline to serve.

It is truly a trying time we are coming to. To re-elect Harper is absolute lunacy. To elect a poster boy is folly. It would seem that Jack died too young. But I am not fond of any of these parties. I worry they are all bought already. I fear our country was sold off previously by Mulroney and there is no hope,

stevie slime "hide in the closet" harper will say and do anything to win an election and stay in power. Comments such as you mentioned are nothing now.

All the other parties have to do is say, they will repeal all the harpercon anti veteran legislation, end of story.

The opposition parties need to aim their "guns" media responses towards the harpercons, not each other. Each of the other parties need to attack harper, not each other. It really doesn't matter who gets the nice house on Sussex, it just has to be someone other than harper. It wouldn't really matter to me if a separatist P.M. won the elections, as long as its not harper and his band of cons. How can you trust a P.M. who has so many appointees in jail, under charges, under investigation?

Anon 4:26 I truly appreciate your feedback! Until I got injured I had a wonderful life and traveled around the world which brought me back humbled. I realized the so-called "third world countries" were no different from ours. Except for one fact you and i can buy a car truck or house on credit they cannot but I loved their ties to family.

Rumors have it the Stephen Joeseph Harper's familia is disinegrating, we will see...

The Colonel would like to hear from you!
http://thesitrep.ca/the-mission/

If Harper's "anti-terrorism" bill becomes law as is (without any deletions or additions eg. it needs robust civilian oversight and ongoing review) .... then look out!

Democracy (with apologies to Leonard Cohen)

It's coming through a hole in the air
From those days in Confederation Square.
It's coming from the feel
That this ain't exactly real
Or it's real, but it ain't exactly there.
From the war against the veterans
From the attack ads night and day,
From the fires of science research
From the tar sands far away
Democracy is coming to Canada, eh?

hi mogs...I'm sorry to hear how you have been treated by those bestial civil servants. The corruption of Canada couldn't be greater. When we defeat those bastard Cons we will really have to rebuild this country on a foundation of Canadian values...

hi Noah...thank goodness we do have a decent military and the corruption is only at the top, where the generals all seem to be dancing to the sound of Harper's trumpet. It is a disgraceful situation, but one we will only correct after the Cons have been defeated...

hi e.a.f...I have always placed my country before any party, and although I wish all the progressive parties well, I will vote for the candidate in my riding who can best defeat the Cons. One can't be too picky or partisan when our country is burning...

hi Grant...nice post, and yes wouldn't it be nice if more Canadians could put their country before their parties. If they can't do that now, when will they ever?

hi David...nice lyrics and I can imagine the Great Leonard singing it. I do wish he would weigh in and let Harper know how he feels about him...

Simon I got over it the only thing I can do is make as many Canadians aware of the Harper-con clown horror show to get them ousted in the next election. You are doing a great job of it Simon ;-)

I saw a large Canadian Forces military supply truck once when I was in Tofino BC on the west coast of Vancouver Island once and they were lost and could not find the only airport. My lady and I were on the beach so the two military men who were quite friendly sauntered up assuming we were locals and asked "Do you know where the airport is?" They had me ROBL [Rolling On Beach Laughing] they had driven right by it imagine this this is hilarious. It was a country type road there was no development yes if you don't have GPS or local directions it certainly can be easy to miss.But now they were at a dead end at a beach we were exploring the road from the highway to where we were was less than a half kilometer in length so they were not far from their ultimate destination and were driving a supply long flatbed semi tractor pulled truck with stuff bound for the war in Afghanistan. So after being courteous and giving them directions on where to turn to get the World War Two Airfield I asked "So what do you think about the Canadian Military's presence in this war?" The reply? "Um we are not allowed to talk about that sir."

Harper has muzzled everyone who gets a pay check from the "Harper Government" this was back in 2006.

If you ever get a chance to go to Tofino British Columbia Vancouver DO IT. The place is quaint and charming you will not find a 'big box' store there nor a chain fast food nor a restaurant chain. It is small and scenery cannot be beat. A word to the wise you had better book at at least a year or in advance that how popular it is no kidding. If you just show up unannounced you will not find a place to stay not even a campsite so be prepared book well in advance.

It is so wonderfully relaxing out there trust me I'm going back:-)