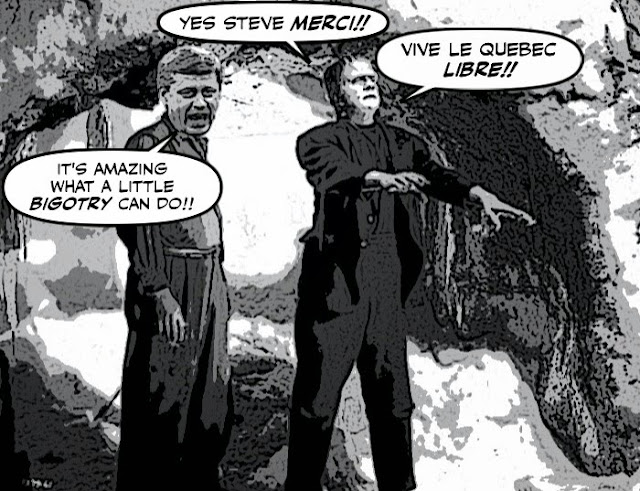 Yesterday I wondered whether Stephen Harper was helping to bring the Bloc Quebecois back from the land of the dead.

Which if you read the hideous comments in the newspapers, is what it has become.

And today when I saw a new Bloc attack ad I got my answer: 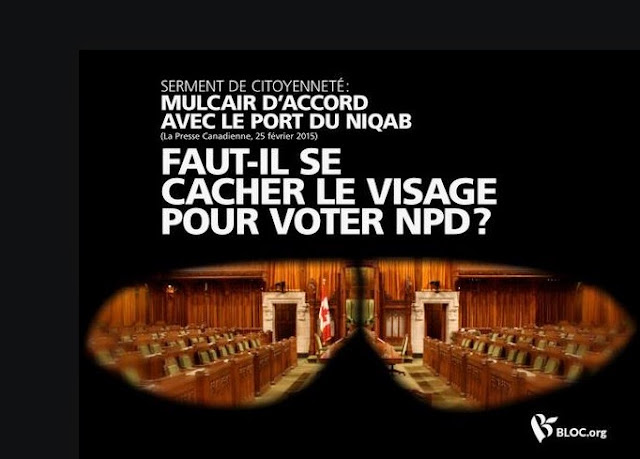 Do you have to hide your face to vote for the NDP?

It couldn't be more disgusting, or more deeply disturbing.

And yes, that is the beast Harper is feeding... 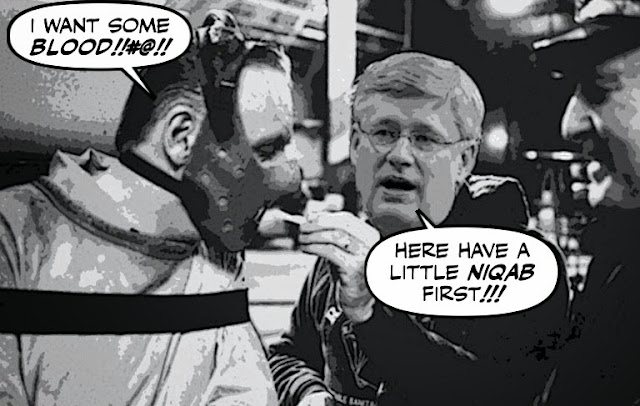 But then the Bloc isn't Stephen Harper's only separatist ally in the province.

With the stench of xenophobia in the air, so is the Parti Quebecois.

As long as the Bloc Québécois has existed, the Parti Québécois has been the formal, natural ally of the pro-independence federal party. But in this year’s federal general election, the PQ may also turn out to be the less likely, unintentional ally of another federal party: Stephen Harper’s Conservatives.

For they were the one's who planted the demon seed of bigotry, with their hugely flawed so called Charter of Values.

It didn't help them in the last provincial election. But fear has made the stunted tree grow. And now they're hoping to reap the sickly fruit along with their new friend Stephen Harper... 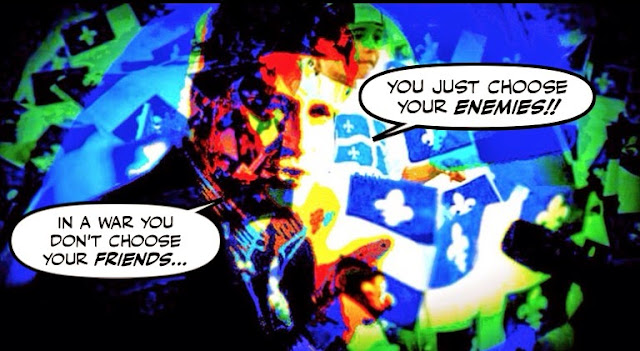 Recently published poll results suggest that fear of terrorism has suddenly boosted the popularity of Harper’s Conservatives in Quebec.

Such gains could make the difference for the Conservatives between victory and defeat, or between a majority and a minority government.

Even as the poison spreads.

A Quebec judge tells a woman appearing in her Montreal courtroom she would not hear her case until she removed her hijab. In an audio recording of the proceedings obtained by CBC News, Judge Eliana Marengo is heard telling Rania El-Alloul on Tuesday that the courtroom is a secular place, and that she is not suitably dressed.

But then why should we be surprised? When ignorance is contagious, and when you light the fires of hatred they are very hard to put out.

There are monsters roaming around out there who would feed those flames for crass political purposes... 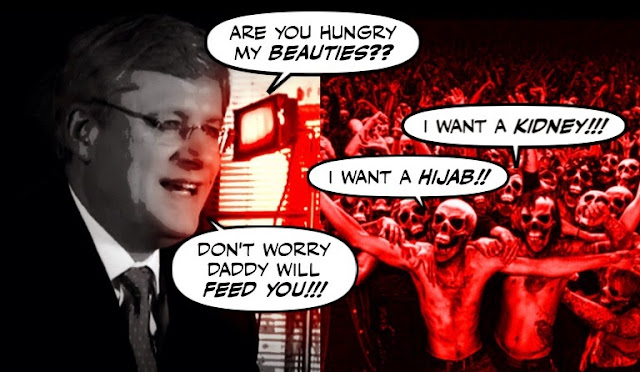 And this has never been more true, or more obvious:

Unless those fires are stamped out, and the sooner the better, they will burn us ALL.

And unless we defeat Stephen Harper and his foul Con regime.

They will tear this country apart...

Yes, the Bloc ad is disgusting. Sad to see the senility of that party in its death throes. And I've known several progressive Bloc MPs, from the labour movement here.

Please don't use the national-oppressive term "separatist". People here who want an independent Québec don't want to "separate" or harm the RoC, they want their own country. You seemed quite strong on that in Scotland last year. Remember that Québec solidaire is pro-independence, as are most facets of the labour and popular movements here. Not just some rural rump elements (which exist in all countries). And that we were in the forefront of LGBT rights in North America, and of a social rather than individualist women's movement.

It is fine to want to prefer federalism - stripped of the legacy of national oppression, but that is not how you will convince your Québécois brothers and sisters that it is preferable.

It is true that the alliance between right wing anti francophone (and anti-Aboriginal) bigots and old pure-laine nationalists of a Duplessis stripe is not only funny, but very dangerous for progressives anywhere.

What those in Quebec might want to remember it is our constitution which keeps them and their language protected in all parts of Canada. Do they really think Con Harper won't target them at some future date?

Con Harper is a creeper, slowly but surely he achieves his agenda. First he de funded women's groups. He tested the waters on abortion and the right to choose. He won't permit the approval of the abortion pill. He doesn't care about dead First Nations women, all 1,200 of them. He says its a criminal matter, but hasn't allocated one nickel to help solve the crimes. Now he says niqabs isn't how we do things. What does he have planned for the women of Canada next. Perhaps a good read of his religious doctrine might enlighten some of you.

Its a short step from banning niqabs and hijabs to banning Turbans. Before B.C. Sikhs vote Conservative, give that a really good think.

Con harper makes some Hell's Angels chapters look down right law biding. I mean how many chapters have a guy with 31 charges against him, two members under investigation; one brought back in handcuffs for allegedly de frauding people of $22M; have one member in jail and another guilty awaiting sentencing. If we want to talk organized crime, I'd suggest we start having a really good look at the Conservative Party of Canada. Now this Conservative Party is also in charge of the RCMP. We know from past history how well things go when you mix police and political corruption. Just have a look south to Chicago.

yes, by all means vote for Stephen Harper and his Cons. Don't call me when they come to arrest you. I'll mostly have moved to another country, before I'm deported because I might have dual citizenship and just am not what Con Stevie wants in his Canada..

hi Kathleen...yes it is his usual modus operandi, and to see him try to divide the people of my province is making me see red. But that's one thing about the Quebecois, they can be divided one moment like during a referendum, but they quickly come together again. And I can't believe that even this terrorist hysteria will make them vote in great numbers for Harper...

hi Lagatta...what's wrong with the word separatist? I'm a Scottish separatist and if a party in quebec ever came up with a shining vision of a kinder, gentler left wing country I could be a separatist there one day. I have many separatist friend and I'm well aware of the days when the PQ was more of a social democratic party, but ever since they started focusing on that so-called Values charter I have had nothing to do with them. And I have to say what is happening in Quebec is shocking me to my core, because that's not the Quebec I love. It's much much better than that....

hi e.a.f...polls have shown that Quebecers are at this time more detached from the federal political scene than any other Canadians, so I wouldn't put much trust in those polls that suggest that Harper is gaining strength in that province. When the time comes to punish him, you can be sure that most of them will...

There is one. It is called Québec solidaire.