Stephen Harper and the Muzzling of the Bill C-51 Debate 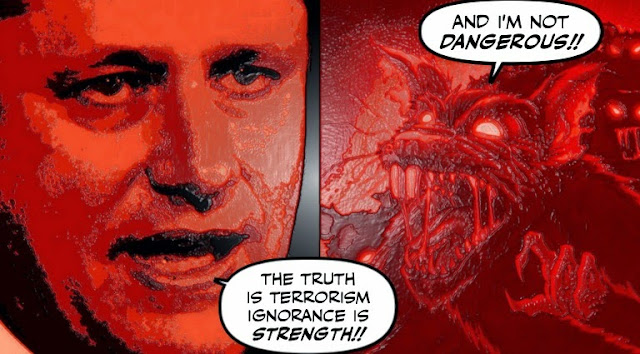 He didn't bother to attend the parliamentary debate on his dangerously flawed anti-terrorist bill C-51. He shut down that debate after only a few hours.

And now he's making sure that even the experts won't have a chance to explain why the bill is such a threat.

The Conservatives are pushing to devote just three meetings to hearing expert testimony on the government's proposed anti-terrorism bill when it goes to the public safety committee for review, CBC News has learned.

Sources say that one of those days would be taken up by Public Safety Minister Steven Blaney and departmental officials, leaving just two meetings to hear from outside experts.

So all we are likely to get out that committee is more of the usual McCarthy style hearings... 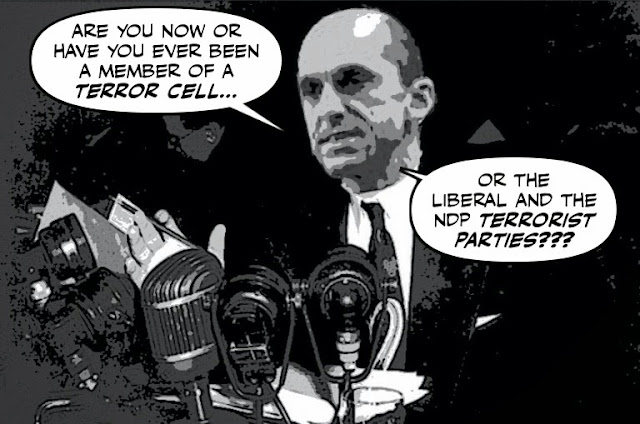 During question period, NDP Leader Tom Mulcair challenged Prime Minister Stephen Harper to commit to a full review at committee — one in which, he said, "security experts and human rights experts [will be] not only heard, but listened to."

In response, Harper called Mulcair's criticism of the bill "ridiculous." "I would urge the committee to study the bill as quickly as possible in order to ensure the adoption of these measures to ensure the security and safety of Canadians," he added.

Because as I pointed out yesterday, this has nothing to do with the safety and security of Canadians, and everything to do with keeping them in them in his darkness, and their ignorance.

Even though his flawed bill will make us less safe rather than safer. 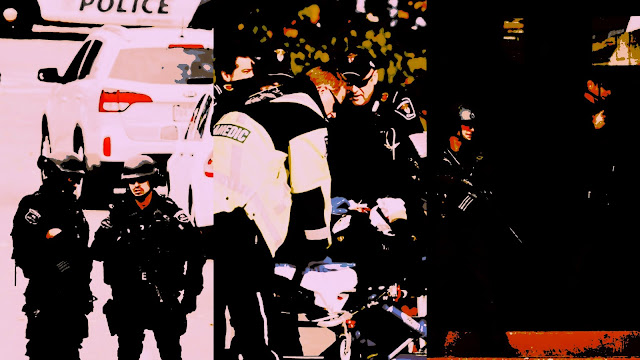 Beefing up the powers of Canada’s spy agency will come at the expense of the RCMP’s ability to investigate and prosecute terrorists, security and legal experts are warning. In addition, giving new powers to the Canadian Security Intelligence Service to “disrupt” security threats will increase the role of political officials in law-enforcement operations in Canada, experts said.

“It’s blindingly obvious that it’s creating a potential problem area, not just in terms of the co-operation between the two agencies, but the efficacy of their work,” said Wesley Wark, a professor at the University of Ottawa and one-time member of the Prime Minister’s now defunct Advisory Council on National Security.

“If CSIS gets involved in too many disruption operations, under a quasi-intelligence mandate, this means that you are removing cases from the reach of criminal prosecutions.”

But will give Harper and his Con regime more powers to go after, harass, and intimidate their opponents.

Because of course that's all he wants... 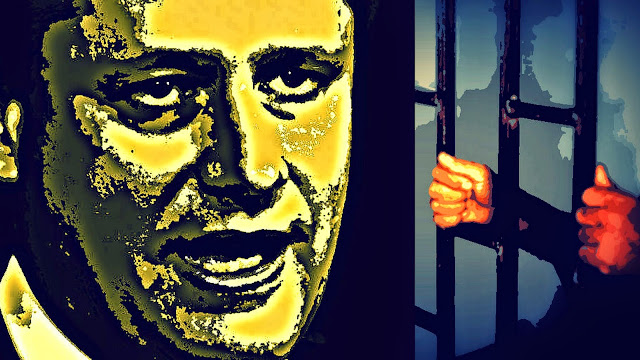 And the good news? As I also pointed out yesterday, the way he is handling the bill only makes the fascist nature of Bill C-51 even more obvious.

And when Canadians see what he is doing, and learn more about the bill, more of them will come to understand that there is no greater terrorist threat to Canada than Stephen Harper himself.

He is crazy, he is desperate, he is dangerous.

And we can't get rid of him of him soon enough...

The question that keeps haunting me, Simon, is when will Canadians rediscover their self-respect? When will they say that enough is enough, that the contempt with which Harper treats us is itself beneath contempt? Until that day comes, I am very pessimistic.

Could it be that the bill is being fast-tracked so Harper can get it in place before calling an early election? How long does committee take, how soon can the bill become law? Then add 36 days.

I've been asking myself the same question for quite some time now..........is everybody asleep?

hi Lorne...yes it's a question I ask myself a lot. And it is easy to be pessimistic. But remember all of this is a product of desperation. He wanted to campaign as a Great Economist Leader, but now all he can do is fan the flames of fear, and hope it alone will make people vote for him. And what he is doing is just showing people how crazy desperate he is, and Canadians are unlikely to trust a man like that with a majority. He may appear like a giant killer right now, but he has feet of clay...

hi Kathleen...I think a lot of people are just stunned and/or frightened. He's appealing to the worst instincts of humanity. But as I told Lorne, I doubt that in the long run that will work for him...

hi anon...an early election is a real possibility, since he would like to strike while the fear factor is still red hot. But he would still have to justify breaking his own election law, and there would be a prize to pay for looking like a grubby opportunist. Still, if I was the opposition, I would be ready for a May election....

I wonder if we will return to the good old days of barn-burning. I am sure there are a few retired RCMP Security Services people who could run a course for CSIS.

We have only too look back to the 1960s and 70s when the RCMP, FBI and the rest of the alphabet "infiltrated" organizations the governments were concerned about. We now know the ones "advocating" violence were the "infiltrators". We can expect to see some of that in the not so distant future, for if there are no "terror attacks" by ISIS types. I'm sure the 'great warrior" just might deem it acceptable to create one, so the great unwashed will see it his way.

it won't be hard to scare the shit out of people. We already have areas of great bias in the country. Gang leader harper will focus there. Yes, if we consider the head of a group of criminals a gang leader, than the Conservative Party of Canada is just another "criminal" gang. 31 charges against Duffy, (should be against Nigel) under investigation is Wallin and Brazeau; Arthur Porter brought back in shackles for $22M in fraud charges, Paul Sona in jail, Del Mastro convicted. Sounds worse than most Hell's Angels chapters here in B.C.

This has been ongoing practice until now. Look for greenpeace and other environmental as well as social justice groups infiltration by RCMP and CSIS, the truth about the Black Bloc (RCMP runs it), also RCMP caught setting bombs to blame it on anti oil protesters and the JDL actions in Toronto. tons of evidence of the federal police and other government sanctioned groups instigating violence in order to justify over the top responses, increased funding and militarization of their members.