Why Progressives Must Unite to Fight the Harper Dictatorship 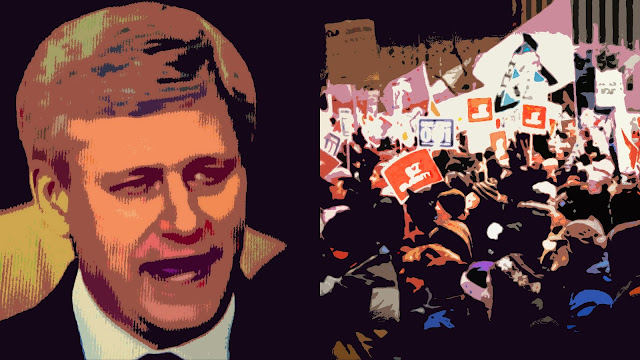 When I see what terrible danger our country is in, caught up in the death-like vortex of the now crazed Stephen Harper.

Whatever they are worth.

I can't help but think how all of this could be avoided if progressives were united.

So I'm glad to see Gerald Caplan urging them to do just that to prevent the unthinkable.

If either the Liberals or NDP end up with a majority government, that party would of course govern. But if any of the other outcomes prevail, a new era in Canadian history must begin. Some kind of long-term rapprochement between the NDP and Liberals must be pursued.

Because the fact that it comes from an old partisan like Caplan makes that message even stronger.

Don’t think, after a lifetime of deep attachment to the NDP, it doesn’t kill me to write these words. But anything else is a recipe for continued Conservative rule, a fate that Canadian progressives must not inflict on our country in the name of party loyalty.

If we take seriously the assertion that the Conservatives have already undermined the values that we and most Canadians hold dear, and that another term will entrench their work and make it irreversible, we have no choice but to place Canada before party.

And if we love this country it's one we can't ignore. Allowing Stephen Harper to win WOULD be unthinkable... 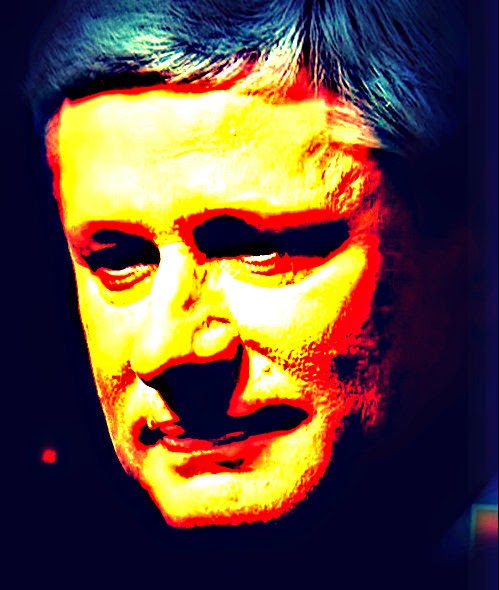 When the damage he could do is so great, and our differences are so petty in comparison with the values we share.

Some in both parties will scream blue murder about such an arrangement. I quite understand because I share a good deal of that reaction. It won’t be an easy negotiation. But the truth is, as Dr. Freud might have said, much of the antagonism between the two parties reflects the narcissism of small differences.

You know, I love my partisan friends.

But when I watch them argue I sometimes can't help thinking of the night when I was a young teenager and found myself in the Protestant enclave of Sandy Row in Belfast, the night before the Orange Parade. 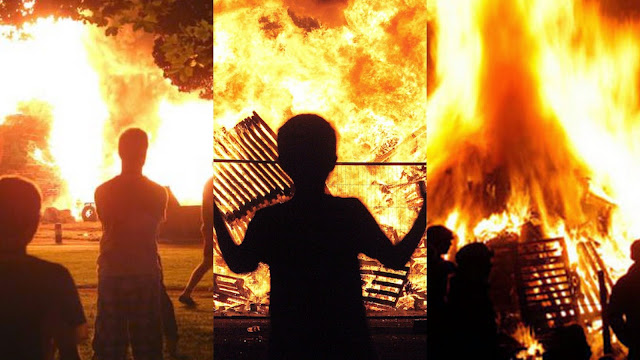 The place was teeming with boozed up kids, who were building a giant bonfire, like hundreds all over the city, to turn the sky orange and intimidate the Catholics. Which also intimidated me, because although I was a Protestant, I strongly supported the Catholics who were fighting for their civil rights.

And I'll never forget when one of the most dangerous looking drunks staggered over to me, and informed me how he'd like to kill what he called the Taegs, while firing away with an imaginary gun.

Claiming that he could line up six naked Protestants against a wall, and six naked Catholics, and be able to tell the difference between them.

Which for one horrible moment made me wonder whether those Protestants were circumcised. And whether, considering my personal situation, it might be too dangerous to take a leak in the street, like so many in that scary mob were doing.

Because it was that ridiculous and that crazy.

And I basically feel the same way about the differences that divide my NDP, Liberal, and Green friends.

Because whatever petty differences they may have, with their clothes on or not, I can't tell the difference between them. I know they have them, and some of them are  worth debating.

But the reason I love them all is because they ALL share my Canadian values. The ones Stephen Harper and his foul Cons are trying to destroy.

And the truth that cannot be denied is that as long as we are divided the Cons will always have an advantage and our Canada will always be in danger of being destroyed. And repeating the same mistake over and over again is the definition of insanity.

Which makes us look like a small people, a petit peuple as we say in Quebec, who can't think or dream as big as this country. Or who would make Canada look old and tired when it is still young and still capable of reinventing itself. And founding a new party is not an act of destruction but one of creation.

Like Caplan I realize that we will not unite before the next election, and I'm patient. I have to be because I'm outnumbered.

But we should start seriously thinking about it, because I know we eventually will. And that's one of the reasons I want us to build a giant Stop Harper movement so it can eventually push our parties to do the right thing.

Like this massive crowd from the Spanish Podemos (We can) movement was doing this weekend in Madrid... 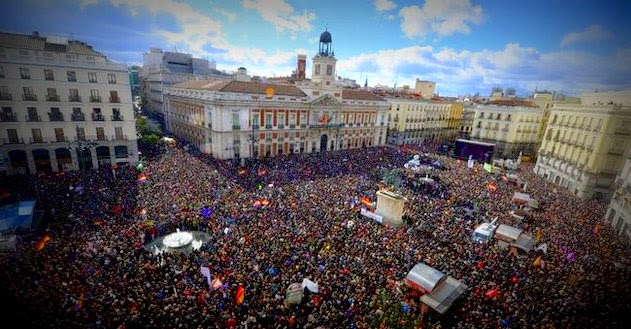 Chanting "tick tock tick tock" to let the old parties know that their day is almost over.

Because I too dream of something bigger and better and live for the day when we are finally united.

And it's not like I haven't had a glimpse of the power of a united progressive movement.

For I also remember the bleak time five years ago when Harper prorogued Parliament, and I saw thousands of Liberals, NDPers, and Greens take to the streets.

And I made this little video to reflect how I was feeling then, and how amazing was the sight of all those progressives working together, and how it inspired me to dream about how we can get our country back...

For we must get our country back.

And the day we finally unite will be a glorious day.

The day I'll be building a bonfire.

And the day we will DESTROY them... 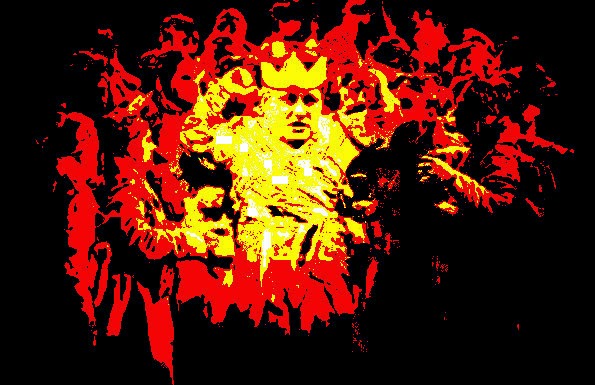 Excellent work, Simon. I am convinced that since the opposition parties will not cede any ground going into the next election, all of us need to do our best, as your video amply does, to remind as many people as possible of the vast record of failure that defines the Harper regime.

it certainly doesn't bode well
our new leadership
can't clear the first hurdle
do you think it's pure ego
or a darker wilful compliant faux-ignorance?
i believe they both know the consequences
and are holding fast for a blue outcome
to be blamed on the voters
god only knows their reasons

Forget the coalition.
trudeau is waaayyy too much in love with himself to ever work with the NDP. The lib "golden child" will be directly responsible for another con majority. You can't be that narcissistic and play well with others. Besides, even if he did work with Mulcair, the libs' corporate masters would guarantee they'd never see power in this province again and they know it.

hi Lorne...thank you. I always hesitate to discuss the subject of uniting progressives because as I said in my post I am seriously outnumbered by the partisans around me. But it will have to be discussed, because the progressive parties may have to form a coalition if Harper wins a majority. But as you point out right now the priority should be assembling all the ammunition we can to use against the Cons in the next election...

hi Hugh...it is creepy and depressing, but remember they are a minority. There are more of us than there are of them. Which only makes the situation even more appalling. That we should be seventy per cent and they still get to govern is simply madness. But yes, the opposition parties need to be hammering away at the Con's dismal economic record, for the economy will almost certainly decide the next election, and as you point out their record is pathetic...

hi lungta...no I don't think it's a conspiracy, I just think it's more like inertia. In a country like ours where democratic complacency is so widespread, it's easy to keep on doing the same old same old and get away with it. We need to demand more from our representatives, and they need to be bolder and more assertive, and inspiring. In the words of somebody or other, no is the time to go big or go home...

hi anon...Trudeau may be reluctant, but if he finds himself with a minority government which is extremely likely, since I don;t see any party winning a majority, he will have to do what his supporters want. And polls show that Canadians are extremely open to the idea a coalition. So public pressure will force both the Liberals and the NDP to work out a deal...

I am a life long NDP and I don't think Trudeau is a narcissist in love with himself. I think he is a decent guy who would make a tons better PM than Harper. When people start trashing him this way I a m lead to believe they may be conservative trolls trying to cause trouble between the libs and NDP.. Sara-Anne Peterson

I personally don't think the public will force a truce between Mulcair and Trudeau reason being okay drum roll please: They are both egotistical bastards that do not care about the general public Canadians except once every four years. They continue to lock horns while the real criminal they should be focusing on Harper literally gets away with murdering citizens in foreign countries we have no quarrel with by his bombing raids. Murdering The Constitution Of Canada The Canadian Bill Of Rights and Steve's favorite peeve The Charter Of Rights And Freedoms.

When are we going to get real representative leadership in this country? When are Canadians and especially the Armed Forces of this once Great Nation Canada seeing how veterans are treated say enough of this con clown show dictated by Stephen Joesph Harper?

Nice video by the way Simon you are very creative. Now that being said there is an underground campaign here in BC to plaster a bumper sticker simply entitled "Harper" beneath every octagon red stop sign right underneath the word STOP! I love it!!!!!!!!!!!!!!!!!! STOP HARPER

The "Anonymous" person who said "trudeau is waaayyy too much in love with himself to ever work with the NDP." is probably a conservative troll.

"John" is one of 200 people who work communications at the PMO. His job is to drop these little grenades into the middle of civilized discussion in an effort to generate support for the Conservative agenda. If you check out his private Disqus profile, you'll see that he's posted almost 14,000 comments online. Who has time for such volumes of pap, except someone who's paid by the hour to produce it? Even if he were capable of posting one piece of nastiness every single minute, it'd take him almost ten full days to reach that number.

The best way to deal with "John" and his colleagues is to vote their boss out of office.

hi mogs...thanks I'm glad you liked the video. I hope to make a few more in the next few weeks. As for the general situation, we have to work with the leaders we have. Nothing is ideal in this ghastly Harperland but only they can evict the Cons. If Trudeau and Mulcair do get to form a government they'll be able to say and do a lot of things that right now they don't dare. ..

hi Sara-Anne...I have some problems with Justin's position on some issues, but I too think he's a decent person, and would definitely make a better Prime Minister than Stephen Harper. A lot of progressives are very picky, but considering the state of our country, all that counts is getting rid of the Cons...

hi David...yes, the Con Ministry of Propaganda and Disinformation does employ a large number of people in its internet department. They know that progressives are way more active than Cons on social media, and they're trying to shift the balance. And anyone who posts 14,000 comments must be getting paid for their efforts...