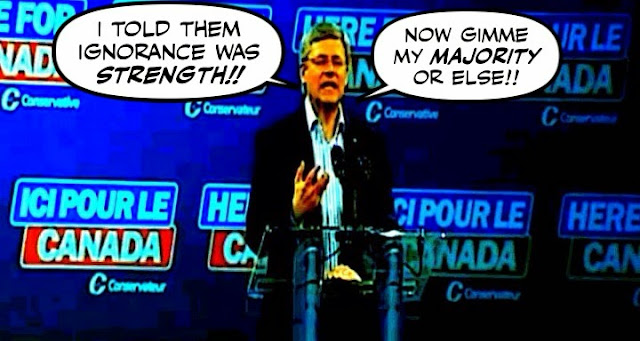 In my last post I wrote about how Stephen Harper had managed to dumb down Canada by killing the mandatory long-form census.

So we're stumbling around in the dark, cities can't make any plans, and we don't even know what diseases are on the rise.

But now it appears that the problem is even worse than I thought eh?

There are apparently so many dumb people in Canada that Harper might even be able to win another bloody majority.

With help from a surprising surge in Quebec, the Conservatives have taken a three- point lead over the Liberals nationally and are again flirting with a majority, according to a new poll from EKOS Research.

Conducted from January 28 to February 3, the poll — which reached 2,974 Canadian adults and has a margin of error 1.8 percent, 19 times out of 20 — found 35 per cent support for the Conservative party. The Liberals were in second, with 32.2 per cent, while the NDP were in third with 17.9. The Green Party and the Bloc garnered 8.0 per cent and 3.8 per cent respectively.

The ground has apparently shifted, and Frank Graves believes the Great War on Terror
has everything to do with it.

“The Conservatives have erased a 12-point Liberal lead and now enjoy a modest but stable and apparently growing lead of three points. The 35-point level is their best poll since 2011 and it is higher than where we had them in the final stages of the 2011 election campaign, which resulted in a majority victory.”

“As for the driver of this big shift in the political landscape, look no further than the role of security and ‘terror’ issues as the trigger,” Graves writes.

Which suggests that Stephen Harper has managed to convince enough dumb Canadians that only he can save them from the terrorist menace... 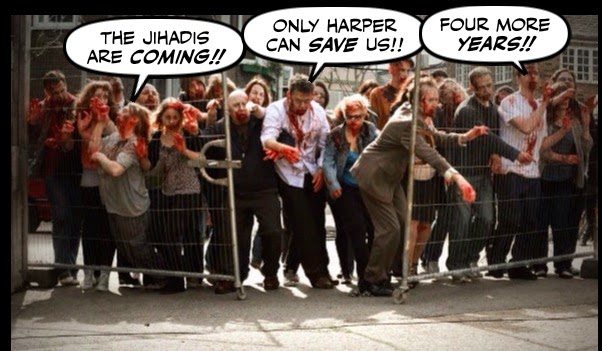 As ridiculous as that may seem...

And the only consolation is that another poll still shows the Liberals ahead.

By the same margin that Graves has the Cons ahead. And Leger's poll has the Harperites at 16 per cent in Quebec, which seems more realistic to me than the EKOS number of almost 26 per cent.

But still it is depressing to see that even after all the ghastly things Harper has done he might be in a position to win another majority.

And it's enough to make even an optimist like me take a walk in the snow... 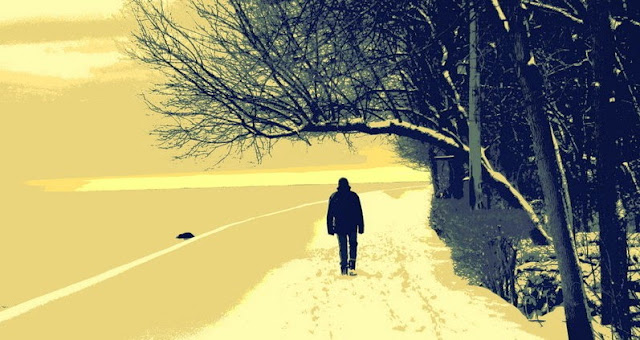 And wonder what kind of country I'm living in eh? Whether it's still Canada and whether I should leave it.

And the good news? Even Graves thinks that Harper's surge will not last all the way to the next election.

The other serious question is whether or not the factors driving their political redemption will persist to October. Frankly, the likelihood of that is not high given the salience of other more important factors such as the economy and regime fatigue. Therefore, the issue of an early election, which has been dismissed out of hand by Mr. Harper, is very much a real prospect.

Although it does make the prospect of an early election even more likely.

And the even better news? I am leaving Canada.

I'm heading down to the Caribbean to move my uncle's boat from one port to another.

And rest up for the coming battle on this beach... 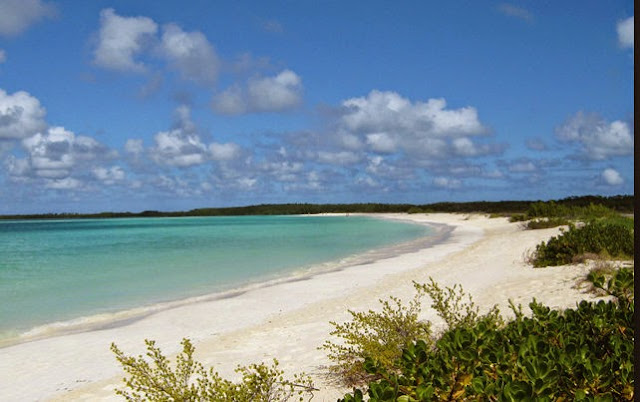 Which I'm sure will give me a much sunnier outlook. Because I have to admit that I could do with a break from this crazy Harperland.

And since Sébastien will be coming with me, it should be a lot of fun. Since we'll have the big yacht to ourselves, can play pirates of the Caribbean, and I get to play the Captain, for a change. While Seb swabs the decks and squeezes lemons for my lemonade.

And as a bonus I will be out of range of the internet for most of that time.

So I won't be able to read about what the Cons are doing to my country.

And all we'll have to worry about are the nasty Con pirates...

Sorry about that, I just couldn't resist. But I think we all agree that we do deserve better than we have, and a better leader than Stephen Harper.

So please hold the fort while I'm gone. And should we Seb hit a reef and the sea swallow us up, remember what I always said:

Never give up hope. There aren't THAT many dumb people in Canada. Except in Alberta.

The Cons WILL be defeated.

And their monster leader WILL walk the plank... 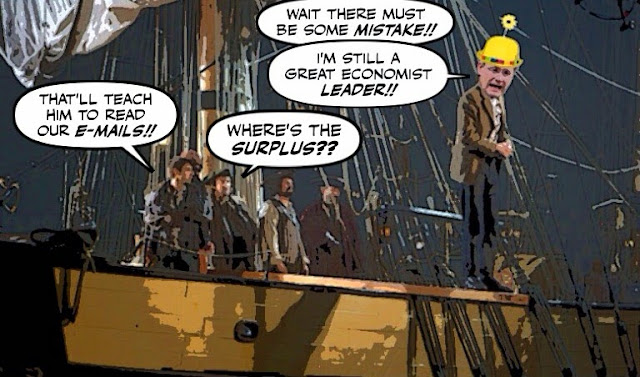 Have a great week everybody, and I'll see you all soon!!!

I simply can't believe how much they're treated as "business as usual."

Now this is the way to make a BIG EXIT! Love it! Have a great vacation, Simon.........will be waiting for your safe return.

Its the big lie, the point of American Sniper. Fight cavemen over there or fight them over here.

If a captured Canadian fighter pilot is executed, burned to death in a cage, it will be a Con slam dunk for the upcoming federal election. Harper drools at the prospect.

Oh, and enjoy your trip to the Caribbean! It's my turn coming up in April. ;-)

Have a great holiday Simon!

have you listened to Harris speech to UNIFOR, Simon? https://www.youtube.com/watch?v=amu-yy5hnFA

I can't stand the parliamentary 'love fest' Trudeau and Mulcair should be going after the Harper-con jugular and bash them for the mess they are making. Have a fun trip Captain Simon and your deck swabbing friend he-he ;)

war on terror is an error.
check Neil MacDonald's article today on the CBC on line news. Its all about how the Saudi's fund groups like El Quida and ISIS. Perhaps "great warrior" P.M. can explain this to us all, how he continues to embrace the Saudi's and sell them armaments while they, the Saudi's continue to fund the terrorists.

The opposition parties need to stop fighting each other and start getting some information out to Canadians. If Neil MacDonald can do it, why can't the political parties do it. Most of them have lists of their members. They can manage to send out requests for money, how about some information and then start putting out press releases about what "great warrior" P.M. is doing.

if Canadians vote for another 4 yrs of stevie slime, they will have only themselves to blame when he cuts the national medical system to bits. People ought to remember stevie, the great economist is planning on cutting several billion from our medical system in 2017. Now how does the fight against terror sound?

The only poll that really counts is the election day poll. Michael Harris and other truly independent journalists eg. http://thetyee.ca/National/

say poll results are just a form of manipulation. Keep in mind some so-called "independent" polling companies can put the fix into their polls depending on who they ask. AFAIK, most polling companies phone land lines, not cell phones. Most people with only a land line are older, and tend to vote Conservative. I read somewhere that the average age of the Canadian voter in a federal election is 65. Can anyone confirm that stat?

Even a few days before the 2011 election, did any polling company predict the number of NDP seats in Quebec?

Have a good one, Simon! So when will you return to regular blogging? AFTER the election?

The Harris speech now has 23,422 hits. Everyone reading this please send the link to all your contacts. In a week check in to see how many new people have watched some or all of it. I regularly send this link plus the following ones to others:

As an Albertan I felt a little stung by your comments about Albertans being dumb.
I know our ethical oil is the most expensive to produce and commands the lowest price.
I know our tailings ponds and environmental record are abysmal.
I know few Albertans vote because they hate government.
I know we get little in the way of royalties from our natural resources because we prefer jobs.
I know we seem ridiculous because we like big ass pickup trucks with fake bull testicles a hangin'!
I know we build transit lines and have them sit idle because of "signalling problems".
I know that Norwegians examined our Heritage Trust Fund, liked it and started their own which now has much more money in than ours by trillions!
I know Ralph Klein gave everyone over 16 in the province a $400 cheque to upgrade their stereo systems instead of putting that money in the Heritage Trust Fund.
I know Albertans are not dumb - just pretty stupid!
Have a great trip Noddy.
Maybe swing by Venezuela and check out their heavy oil - I hear the CIA are doing a number on them as well as Canada's economy (installing right wing neo lib governments!!)

Black belt ass-kissers, the lot of them!
Up Clare Daly! Fuck trudy, mulcair and harpie!

Have a great trip, Simon!

Here's a little something to read...

Just about a slam dunk for Harper coming up. People are just soo dumbed down.

While Simon is away here is some comforting news from Alberta, the Heart of Canada-Energy Super Power.
http://albertapolitics.ca/2015/02/alverta-v-libya-no-danger-regime-change-broke-alberta-now-collecting-plus-minus-zero-petroleum-extraction/
We need the rest of Canada to crowdfund our pickup payments!

Enjoy your vacation.....and you'll be coming back to Sun News being off the air (finally) as way of compensation for the temperature shock at least.