Stephen Harper and the Slow Melting of the Con Regime 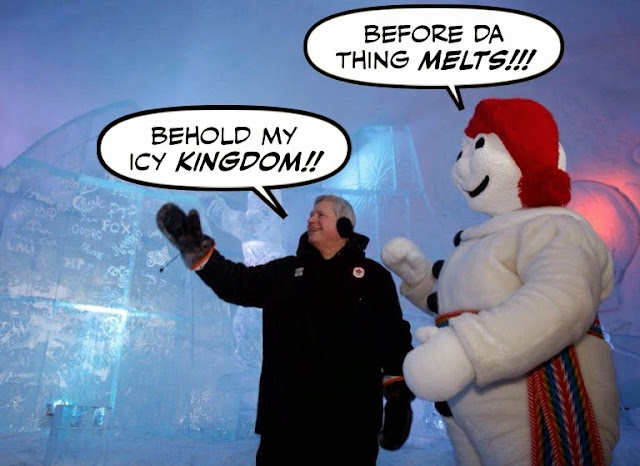 Well I see that Stephen Harper has been spending more time in the tiny Con bastion of Quebec City.

And it seems only appropriate that he should stage this photo-op at the city's Ice Hotel.

Considering the state of his government, and the way his support is in danger of melting.

In a week blissfully free of fresh terrorist atrocities, it now appears that the security wave which propelled Stephen Harper into a clear lead has run out of momentum. The Conservatives have declined three points and the Liberals have risen slightly, by an insignificant two points.

The demographic and regional shifts support the theory that terrorism’s lower political salience in the absence of recent attacks is driving this modest, but statistically significant, shift.

As more Canadians stop worrying about the Terrorist Menace, and start worrying about what Harper and his incompetent oil pimps have done to the economy.

And of course, this is a bonus.

A few weeks ago they were dead even, but a new Forum Research poll has the federal Liberals now leading the Conservatives by a “healthy” seven point margin. The public opinion survey found the Liberals have 39 per cent support, compared to 32 per cent for Prime Minister Stephen Harper’s Conservatives. The Opposition NDP are at 17 per cent.

Even if it is a Forum Poll.

For it all seems to suggest that his balloon is in danger of deflating disastrously.

And that all those rats abandoning that sinking ship blimp are sending out a bad message... 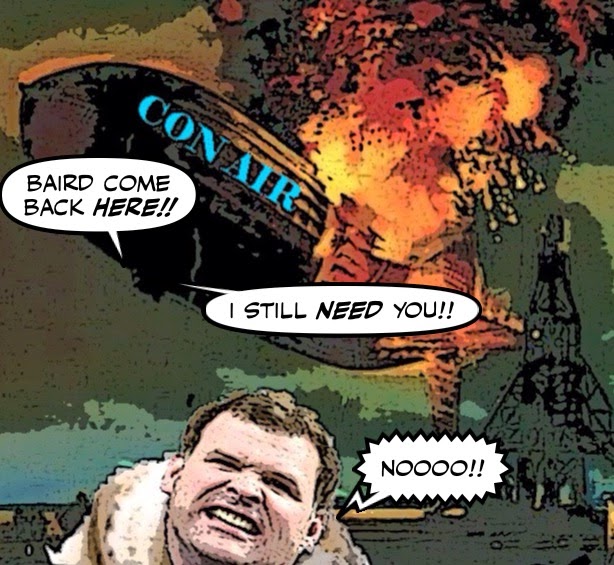 And of course the sight of Pierre Poilievre as the new Minister of Employment... 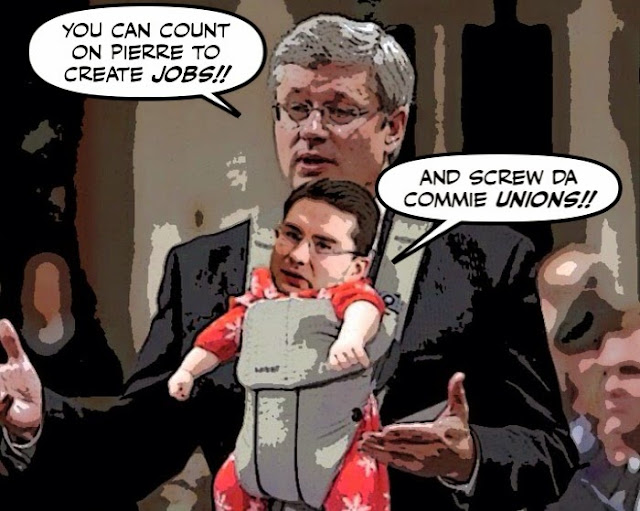 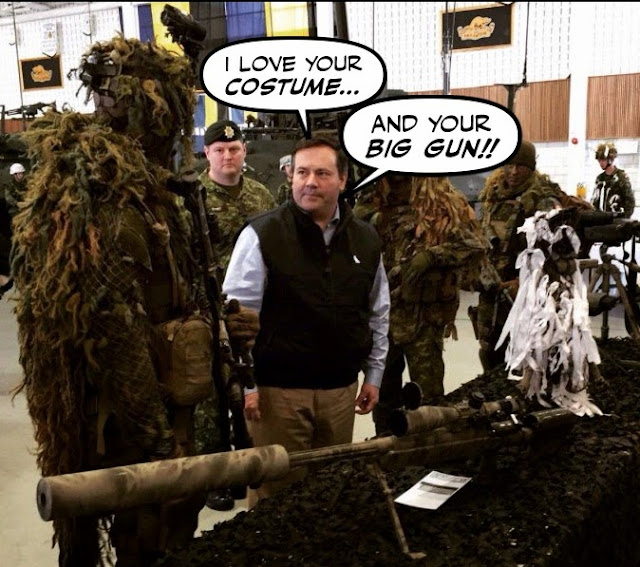 Jason Kenney isn't known for holding his fire on the subject of radical Islam — and now he's in charge of whether the Canadian military will or won't continue to do the same.

The mission is about half-way through the allotted six months and it will be Kenney who will have the task of deciding whether or not to keep it going.

Is hardly reassuring, because you couldn't have two Cons less suited for those jobs.

But then of course Harper is desperate.

He will use any excuse to stir up xenophobia, and try to scare people into voting for him.

While slowly turning Canada into a police state.

And it is all bovine excrement...

Even some of his most dedicated supporters seem to be recognizing bullshit when they see it:

Support from the less well-educated and male voters has dropped more steeply for Stephen Harper, as has his net approval score. It’s possible the government’s recent florid hyperbole on the jihadist threat has actually overshot voters’ capacity for suspending disbelief.

And if he loses the support of those voters he won't have a chance of winning the next election.

The zombie king set out to scare voters into voting for him.

Only to end up scaring them away... 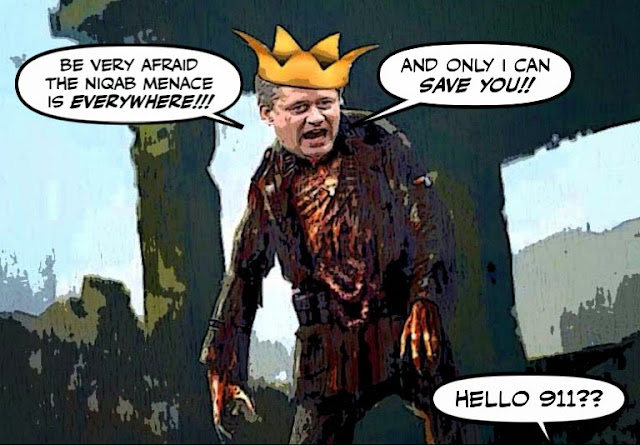 The desire for change in Canada remains as strong as ever.

And in the end it will defeat him...

I want to see harpie institute a military non-voluntary recruitment of all young Canadians into the military here for minimum 2 years service (see u.s. former "draft" policy, israel, Switzerland and South Korea just to name a few) and then start ordering our young folks into firefights around the world like his heroes bush and o-bomb-a and then just watch his numbers plummet to the bottom of the proverbial ocean overnight. The old bastards who sit around in this country safe, drunk and listening to the likes of that fucking moron don cherry in their homes now thinking that Canada has become a great warrior nation because harpie has told them so would have a serious change of heart if their or even a few of their neighbors' kids came home in pieces or in a box. Nothing brings home the concept of reality faster or more brutally than the reality of real warfare does when you see those things up close and personal and you see the kid that used to be a hell of a goalie because of his/her catlike reflexes shitting himself/herself at the dinner table and he/she doesn't even know it now or they wake up screaming in the middle of the night with all the horrors replaying over and over until the end of his/her life. Now that's a neo-con floor show, boys and girls! That's real entertainment as long as it isn't you or your kid(s)! Oh, and make sure to put all the poor and/or First Nations and/or any non-white kids in the front line because it works so well for the u.s. doncha know! ("cannon fodder" is the correct term)
Yep, harpie doesn't know he's blowing the whole "war president" thing right now. He has a golden opportunity here to really become the most remembered p.m. in the history of this country if he'll just get on the bandwagon before it gets too much closer to election time again!
Welcome back!

You know the gene pool is pretty shallow when Harper puts the likes of Poilievre in charge of anything after the unfair election act debacle. It'll be fun watching Skippy implode as his gross incompetence is back in the spotlight and knowing he wont have the time to screw the country up more before the election.

You have been notably absent from the daily slog(blog) and I'm now wondering why your only comment on the Eve Adams stupidity is to call it a reason for the Harper drop in the polls?
If this Junior and Eve photo-op doesn't make the Liberals look just like the Cons, I'm not sure what does...

Stephen Harper is in big trouble, yes the terrorism bubble seems to have burst...However, I believe it`s the economy, the oil disease known as Dutch..

Jim(The Grim Reaper) Prentice has announced 10% percent cuts across the board...How on earth can a Government find $5 billion dollars worth of cuts in one year...Education, healthcare, or slash everything else..

Those announced budget cuts are actually making things worse, people are now not moving to Alberta, in fact those with money and age are planning on getting out of dodge as fast as they can, housing prices in Alberta plummeting, layoffs(Cenovus) are coming fast n furious..

Alberta, these cuts could even destroy the provincial con party, ..Unless Prentice brings in a sales tax (7%)..Alberta populace is going to get real mad...The other provincial parties will advocate for a sales tax and income taxation reform(tax the wealthy)..

The great powerful Alberta, slash, burn and bring pain onto most, ....Prentice vowing not to bring in a sales tax will doom him, ....And it might be possible that so many program cuts get announced that the people of Alberta revolt and demand a sales tax to save healthcare, education and the like..

But more fundamentally, Canada`s populace now realize that big oil is not the answer, all those Canada action ads($100`s of millions worth of them) was money flushed down the toilet, Canada back in deficit Despite Oily Oliver`s claims, while niche income splitting tax cuts for the top 13% of Canada`s wealthy further deepen or national debt.

Lightbulbs across Canada are shining a light onto this reality.

Yes, change is coming to Canada, Harper is going down..

The people have seen the evil and his name is Stephen Harper..


Glad you had vacation, warm dem bones, recharge the battery..

See you on the other side.

hi anon...thank you it's good to be back. I was lost in another world for a few days, and thinking that I was born to live in a sunny place. But then on a BBC news show in a hotel where I was staying I saw Harpo on with Angela Merkel. And just one look at his ghastly persona convinced I must return. For we must defeat him if se are ever going to live in a decent country again. As for the question of the draft, I wouldn't want young people to be forced into the military, but you're right about the effect it would have. And you're right about those who get all whipped up about war without having any idea how awful it really is. I belong to a fighting family, and a clan whose leader led the successful commando assault on Dieppe. I've done a fair bit of fighting myself, too much in fact. But I've also seen the brutal depressing aftermath, so I never romanticize war, I avoid even violent video games, and there's nothing I despise more than blowhard chickenhawks like Jason Kenney and Stephen Harper. For they are truly pathetic...

hi anon...yes picking Poilievre for an important job like employment shows you how thin their ranks are becoming. And explains why they seem to be making it up as they go along. Skippy will probably do better than expected because he does do his Question Period homework. But he remains a visionless ideologue, and a professional politician with nothing to offer anyone. And hopefully the foreign worker's scandal will taint him as much as it tainted Kenney....

hi mizdarlin...I have been noticeably absent because I was out of the country, sailing across the Caribbean and out of internet range. So gimme a break eh? If I had been here when Adams crossed the floor I certainly would have blogged about it. I have a great graphic of Eve and Dimitri in the Garden of Eden being tempted by the Harper snake, which begs to be used again. Now with Justin in a loincloth peering out from behind a tree.;) But look I'm not partisan, and if Eve's defection is hurting Harper in any way I'm all for it. Remember a lot of Canadians don't follow politics as closely as you and I do, so they do see things differently. Ignorance is deplorable, but it is a reality. Harper uses it against us all the time so now its his turn. And if the smitten Dimitri can be of any help I'll take it too. Our country is in real danger of being destroyed and beggars can't be choosers...

hi Grant...I agree with you completely. The most devastating result of a shift away from the terrorism issue would be the way it would allow more Canadians to focus on what Stephen Harper's oily obsession has done to our economy. And that is now his greatest vulnerability. I do fear that some Canadians will be easily bought off by the promise of tax cuts, but surely most must realize now that he is no Great Economist Leader. If I was the opposition I would try to shift attention away from the war and hammer him on his economic record....

"hi mizdarlin...I have been noticeably absent because I was out of the country, sailing across the Caribbean and out of internet range. So gimme a break eh? " ---> Simon

Simon you announced your sail on your father's ship with Seb before you left. Those that were paying attention wished you a happy cruise. Eh?

Ya know miz is amiss eh? He or she missed the fact you published you were gone for a while on a Caribbean vacation. Me and my sweetie are going to The Queen Charlotte Islands this summer [Haida Gwaii] I'll be gone from the the computer too. I hope Miz does not have a hissy fit over it. I know you and Sebastian won't!

I am looking forward to this BC Ferries Cruise with the love of my life. It is nice to take time out eh?

Cheers and much love,
Mogs Moglio!

and the rats are jumping ship!