The Con Regime and the Latest Terrorist Menace 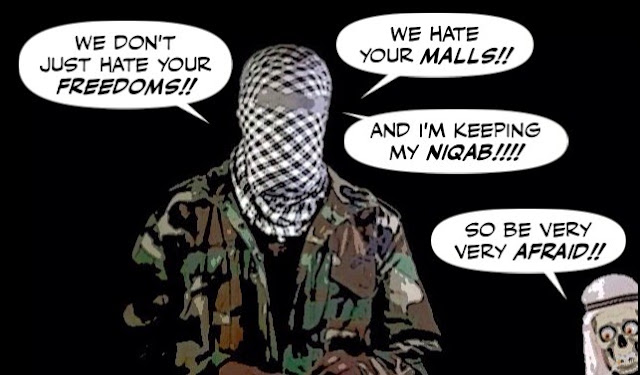 Well it was Sunday, so I'm pretty sure Stephen Harper must have thought his feverish prayers had been answered.

For there was some masked fanatic on YouTube, apparently on the other side of Africa, calling on wannabe Jihadis to attack the West Edmonton Mall.

The RCMP says it’s investigating a reported video from the Al-Shabab group that appears to urge Muslims to attack shopping malls in western countries — including the West Edmonton Mall.

And sure enough it wasn't long before the hapless Con stooge Steve Blaney was out beating his tiny drum: 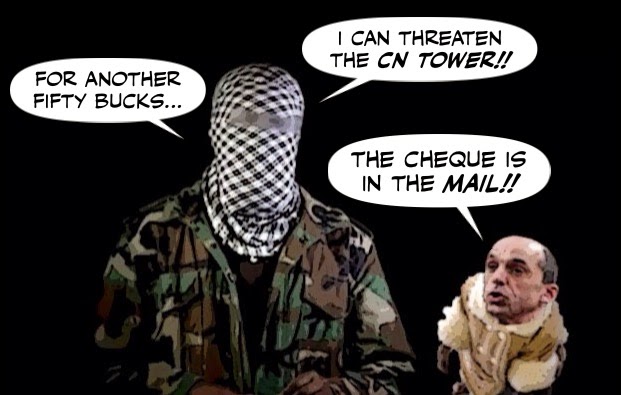 “Canada will not be intimidated by threats from any terrorist organization,” Public Safety Minister Steven Blaney said in the statement.

And making it sound like a serious threat even though it was only a casual reference at the end of a long video. And who is that masked loser anyway?

But then Harper and his foul Con regime will jump on anything they can to try to scare Canadians into voting for them, and surrendering their liberties, so he can turn Canada into a police state. 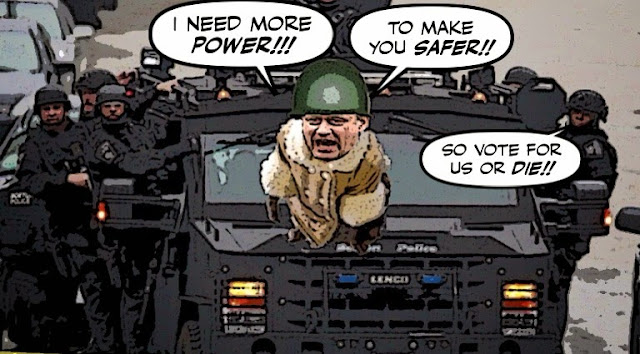 For as Dr Dawg points out we're definitely heading in that direction.

And as Michael Harris points out, Harper is now so determined to inflame the situation for crass political purposes, he really needs to be restrained or recalled.

How fitting that Ralph Nader has put out a consumer warning about Stephen Harper? According to the former U.S. presidential candidate and long-time consumer advocate, this prime minister is a combination of Chevrolet’s doomed Corvair and Dick Cheney: A lemon and a warmonger — all rolled up into a consumer dud begging for a recall.

Because he will do ANYTHING to cling to power, or win another bloody majority.

What Canadians may not realize is that this prime minister has no problem with secret police and other things that deny us our basic individual rights. Harper has shown time and again that he has never been a fan of democracy or the Constitution and never will be. Getting elected exhausts his interest in the principles of democracy. The rest is about the real deal — the naked exercise of unfettered power.

But the good news is, as I pointed out the other night, it still isn't winning him the votes he needs to get anything more than a minority.

And as Tim Harper points out, his Great War on Terrorism and Niqabs, can't be sustained. 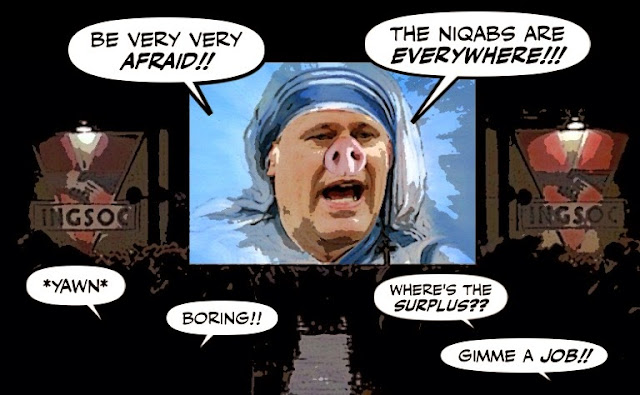 While Harper has now skilfully played wedge politics on three issues, none of them is likely to drive votes in the autumn, although a terror threat will mean that foreign affairs will carry more weight than normal in a national vote. What this troika of hot button issues has done is push the economy into the background in the national debate but this is only temporary.

The election will be ultimately be decided on the state of this country’s economy. Polling in this country routinely puts that at the top of the list of voters’ concerns. That is not the safe turf it has traditionally been for Harper. Things look solid for Harper and his Conservatives right now — but you can only play the fear and division card for so long.

So although it may look like a nightmare right now, it won't last. The economy and all his scandals will come back to haunt him.

And ensure that he'll never be able to win anything more than a minority. So even if he does scratch one out, we'll still be able to topple him.

You know, in my last post I wrote about how gloomy this country has become. And how I could never let Harper get me down like that.

Not when the reason he's acting so crazy is only because he's so desperate.

And not when so many Cons are abandoning his ship or whatever... 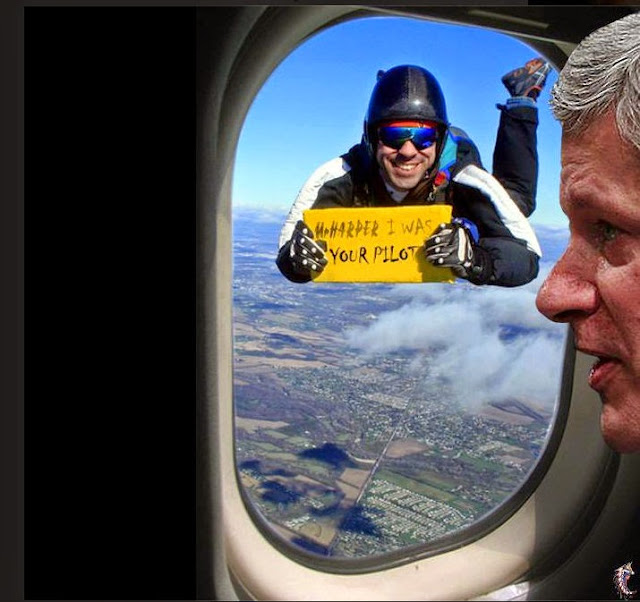 For he may not know it yet, but fear will not sustain him.

His madness will condemn him.

I am far past some traditional response. Which would be normally its a bad harvest and some new crops will come. Why is Canada now a world bully?

The Charter Challenge is getting more fleshed out.

Hi Simon, I just wrote this and its universal for everything you might post. The question is what is Canada and why did it disapper and why are not more citzens upset? Anyway I will like you never surrender. Its like the message from Intersellar. The Goverment of Canada is now a bully. Maybe they can identify something good, but they are like cookware that was costly but flakes off when the heat is applied. I may be one but I am sure I am not the only one who no matter how heartfealt the issue be, does not want to join the UN as part of the solution
http://thinkingaboot.blogspot.ca/2015/02/why-is-canada-new-thug-on-block.html

So, as I understand from listening to Stephen Harper and Steve Blaney, Canadian's should stay away from shopping in Malls because it is far to dangerous to go there. I think Canadians should take that advice and only shop in stand-alone stores. Of course, it is only fair to let companies know that we are doing this on the advice of the Prime Minister and the Defense Minister. Granny Betty

Recent trade deals look like they could cause job loss and undermine economic stability in some areas of Canada.
If that's the case, could proponents of the deals be charged under C-51?

"Once you grant the government some new power or authority, it becomes exponentially more difficult to roll it back. Regardless of how little value a program or power has been shown to have (such as the Section 215 dragnet interception of call records in the United States, which the government's own investigation found never stopped a single imminent terrorist attack despite a decade of operation), once it's a sunk cost, once dollars and reputations have been invested in it, it's hard to peel that back.

Don't let it happen in your country."

Because Harper and his cabal are so ruthless Simon, it would not surprise me if they chose to use "black bloc" operatives to influence unstable "lone wolfs" into doing their dirty work to scare the Canadian populace. The Harperites prove on a daily basis that they lack any semblance ethics and those not paying attention are being swallowed up by his gibberish.

When I saw the video and the Cons response I almost peed myself laughing. They want us to believe this and take it seriously. Like ya. Some of us remember what the RCMP, FBI, and the CIA did back in the 1960s when they infiltrated "terror" groups which were "home grown".

There isn't any proof this is a jihadist video. How are we to know it isn't some Con wanna be trying to move those "terror" bills along. How the hell does some "terror" group out of Africa know about the west Edmonton mall. Like give me a break.

Lets talk about what really is killing Canadians: economic inequity. Stats Canada did a study over 16 years of 2.7 Million Canadians. It compared the top 20% income earners in Canada with the other 80% who made less. What the study reflected was that 40 thousand Canadians died prematurely each year due to income inequity. So before "the great economist" P.M. signs the anti terror bill into law and starts spending a shit load of money, he ought to have a look at what is really killing Canadians: INCOME INEQUITY. IT KILLS. It is extremely doubtful that any terrorist will ever kill 40 thousand Canadians each and every year for 16 years, but income inequity does it. So what has the "great warrior" P.M. done about it? NOTHING. So as 40 thousand people die each and every year in Canada the P.M. does nothing to prevent it. But he is prepared to scrape our democracy and spent tens of millions on a threat which has not yet been proven. The two people killed last year by alleged terrorists, were in fact killed by mentally ill men.

When I look at the death rate in B.C. from drunk and distractive driving it comes out to approx. 160 "kills" per year. Has anything really been done which would impact negatively on our democracy? Na, not so much. But the P.M. and his bunch of Cons are going to destroy our democracy because he thinks some "jihadists" might kill some Canadians. The truth is Stephen Harper and his Cons are responsible for the deaths of more Veterans and Armed Forces members than any jihadist has been or will ever be. So I have a really good idea, lets pass a law to ban people like Stephen Harper, because as always, he is the great terrorist, not some person sitting in the middle east.

stephen joesph harper is the christian jihadest for him the crusades never ended and are enlivened by his terrorist un-holy actions E.A.F.

Why the West Edmonton Mall? Do the Cons risk losing to the Liberals in Edmonton? The Harper menace must be stopped.

hi Steve...the reason Canada is a bully is because Stephen harper is a bully, and he corrupts all he touches. But don't reject the traditional response because it remains true. We have had a really rotten harvest, but new crops and better days are coming...

hi Morlock....I'm glad to see that some citizen is trying to hold the Con regime responsible for the way it supported the murderous assault on Gaza. But of course, the best way to punish the Cons is to defeat them in the next election. And then investigate all their crimes....

hi Steve...as I said above, Canada has been hijacked by a gang of political thugs, but in only a few months we will get a chance to take it back. I look forward to that day, for it will be a glorious one...

hi Granny Betty...yes they want us to feel afraid wherever we go, because scared people can be manipulated into supporting ANYTHING. But for me that would be like surrendering to the terrorists AND the Con regime, and there's absolutely no way I will. And I love your idea. Instead of creating the spectre of terrorists going after our malls, let's have the malls go after the Cons... ;)

hi Hugh...well if there was any justice, they would be charged with treason. But as soon as they are defeated hopefully we will be able to throw the book at them....

hi anon...We owe Edward Snowden a lot, his warnings couldn't be clearer, and if Canadians ignore those warnings and what has happened in post 9/11 America, they really will deserve the police state they will end up living in...

h anon...I wouldn't be surprised either because I do think they are now so desperate to cling to power that they are capable of anything. I am absolutely convinced that Stephen Harper and his gang are trying to provoke another terrorist attack by shooting their mouths off all over the place. And they could not stoop lower than that....

hi e.a.f... yes that video is ridiculous and I'm sure you noticed how some of the same words in that video seem to be taken directly from Harper's speeches. He really has gone off the deep end, and there is no greater terrorist...

hi Christine....I understand the Liberals are a threat to the Cons in Edmonton. But I think that terrorist loser chose that mall because there are 20,000 Somali Canadians living in that city. I've done a little research on that terrorist group, and from what I understand they are doing so badly, all they can do is hope to motivate some lone wolf nut case into making it look like they are still a serious threat. Trust Harper and his Cons to come to their rescue....