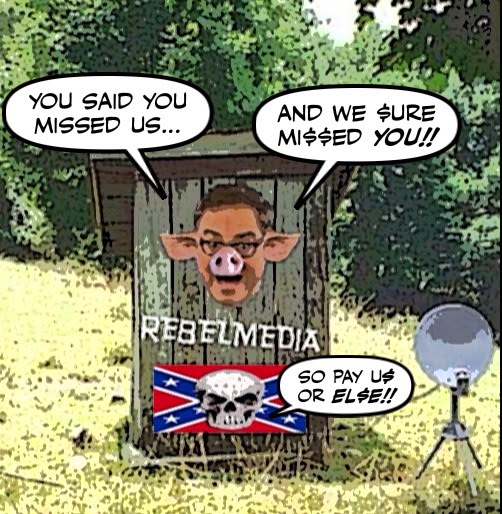 Well you've got to give Ezra Levant credit. It's only been a week since his ghastly TV show, and the entire Sun News Network, went down the toilet.

But already he's back on the air again.

Or at least living under this rock.

And although there's not much one can say about that sordid website, because there isn't much there eh?

It clearly is being published out of Levant's living room.

The website’s beginnings are certainly humble. In a manifesto video (above), Levant notes he is filming from his living room and his spouse wants him out of the room. “I am literally standing in my house right now. How pitiful is that?” he asked.

And yes it is pitiful.

What with the Muslim bashing, and the assault on the rights of bullied children, and the one on unions.

And soooooooo much of his favourite Brian Lilley... 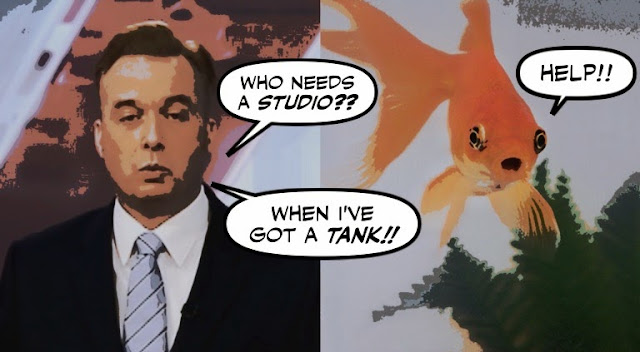 The boring Con fish who blows bubbles and bigotry out of every orifice.

But then goodness knows Levant, or the "Rebel Commander" as he now calls himself, is going to need all the money and the hustlers he can get...

If he's ever going to pay his tiny staff more than bottle tops, or pay off all his legal bills.

And when I look at that site, or smell its rancid stench, I am reminded of what Levant and those others really represent.

And all I can say is, in case I didn't make myself clear before eh?

And while I thought I carved a classy gravestone to mark its sudden passing... 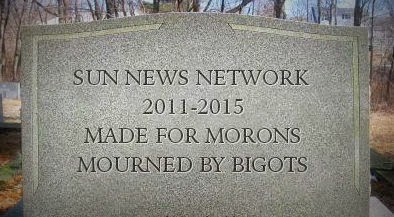 I'm not going to be that generous with Levant's latest misadventure.

Because although I don't know the exact date of that Con site's demise.

I'm willing to hazard a guess.

And I do know its epitaph... 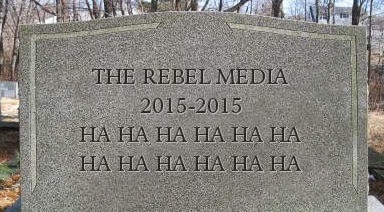 Anyone know how to whistle Dixie?

I pretty well laughed for half of a day when I saw his little website a few days ago and is moniker of "rebel commander". Worst. Rebel. Ever.

Weirdly, Ezra Levant wrote an entire book about Omar Khadr without ever interviewing him once. Investigative journalism for the win!
https://twitter.com/canadiancynic/status/568892355014586370

CBC's Kady O'Malley: "I will say this: I know a lot of conservative-minded folk who loved the fact that Sun News existed, but wouldn't actually watch it."

rebel commander, sort of like those "southern" rebels, guess you could say they are all in about the same club. Good luck Ezra. but you know I think the guy will land on his feet once again.

I'm not sorry Ezra's gone and a lot of the less than kind material the station put out, but a lot of people lost their jobs and in this economy, that isn't a good thing. They had families to support. I never agreed with what they had to say, I just feel they have the right to say it. Its what a democracy is all about. Its freedom of speech, even though it is in my opinion awful stuff they spew.

hi Richard...yes isn't that special? The Rebel Commander. That greasy oil pimp posing as a rebel. Somebody should sue him to take the word back. .. ;)

hi David...Ezra Levant's book on Omar Khadr was an appalling screed, riddled with factual errors and totally biased. But he is a bully he bullies those who defend the rights of LGBT children, and he attacks the former child soldier to pander to his rabid base who hate all Muslims. The man is a lousy Con and a horrible human being...

hi e.a.f...yes it does have a Dixie feeling to it. Either that or it's out of some Star Wars movie which tells you what kind of a fantasy world Levant is living in. Once he was rotten but at least tried to pretend he was a nice guy with a wacky sense of humour. But now he's just a vulgar hog...

That is all Red Chinese oil dripping off the wall with EZ puppet....

2017 and his Rebel Media is not only there but growing without our taxes (1 billion for the CBC remember).

hi et quoi encore...yes Levant may have been saved by the rise of Trump. But no decent person can have any respect for that Trump impersonator, and I've got some bad news for his admirers. I have just been informed by my fraud squad friends that the CRA has just begun a massive investigation into The Rebel and its fundraising activities. Stay tuned for further developments...