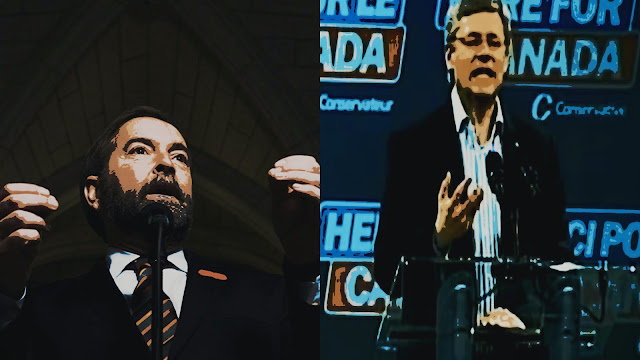 It was good to see Tom Mulcair finally take a stand against the Con regime's totalitarian anti-terrorism bill.

Opposition Leader Tom Mulcair says the NDP will fight the Conservative government's new anti-terrorism bill when it goes before the House on Wednesday and pushed for the Liberals to do the same. After his party's weekly caucus meeting, Mulcair said the real threat of terrorism requires responsible measures, not the "dangerous, vague, ineffective" Bill C-51.

Because it needed to be said: Bill C-51 is a rotten bill and should be scrapped.

But what was depressing, and deeply alarming, was to see how Stephen Harper reacted:

Because it's clear that he's the one becoming more and more extreme. And is not only trying to scare people into voting for him, and turn this country into a sinister surveillance state.

But is also unbelievably enough, trying to stir up xenophobia for crass political purposes.

He has seen that fear and ignorance is on the rise in small town Quebec. 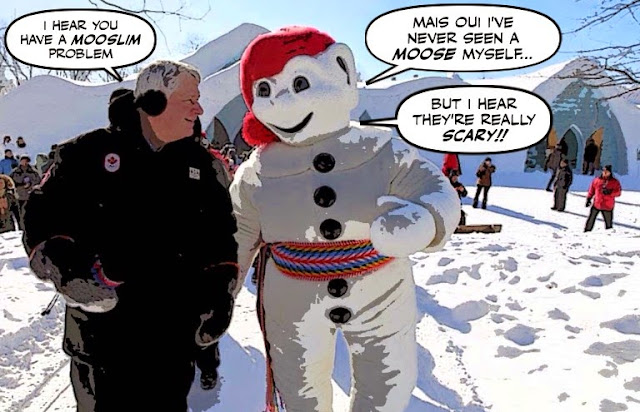 And like a shark attracted by blood in the water, he is determined to exploit it for maximum political advantage. 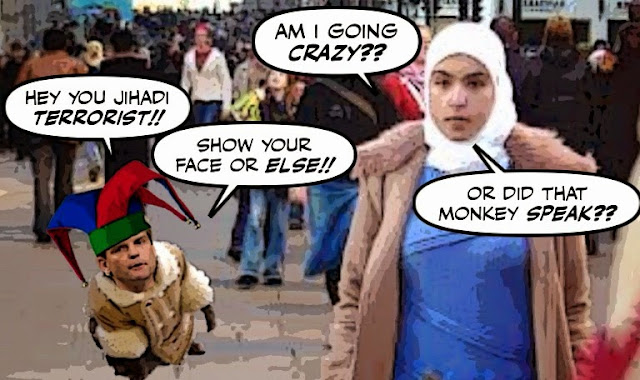 When the two are quite different, and even a page in the House of Commons wears a hijab. As do thousands and thousands of other Canadian women.

Why would he say something so stupid, if it wasn't part of an organized campaign?

Only a week after the Harper government asked supporters to sign a "sickening" online petition invoking negative stereotypes of First Nations, the Conservative Party of Canada has released a new and equally divisive petition to supporters, rallying against "face covering" during citizenship oaths.

And Alexander wasn't trying to please his boss... 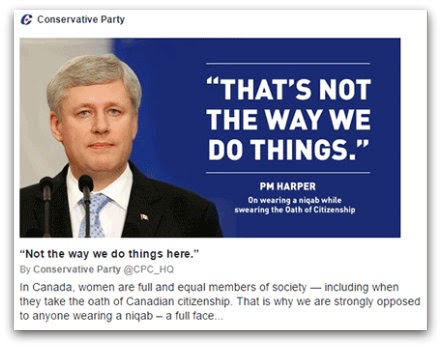 As he always has since he sold his soul to him... 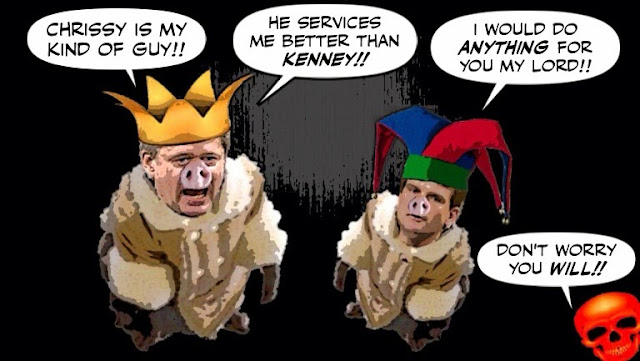 Even though the niqab issue is a fake one, since the woman in question has agreed to reveal her face in private to citizenship officials before the ceremony.

And whether you agree with the use of the niqab or not, and I don't because I'm an atheist and a supporter of women's rights. The fact is, it is a violation of her religious rights.

"Freedom of religion and conscience are at the core of the Charter of Rights and Freedoms because they are at the heart of what it means to be Canadian. We don’t ask people to give up their religion when they come to Canada; on the contrary, Canadian law protects their religious practices, which is why Canada has long welcomed all sorts of faiths persecuted elsewhere."

And all the Cons are trying to do is stir up anti-Muslim feeling all over country, in a depraved attempt to create yet another wedge issue, and try to win another bloody majority.

For why do you think Peter MacKay would define terrorism as being "culturally motivated" even though the Criminal Code does not? 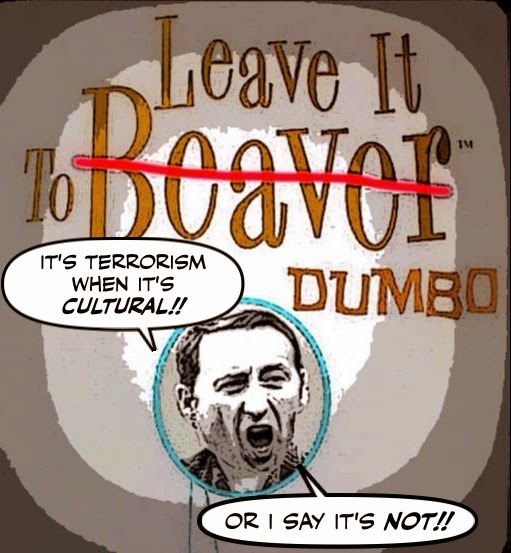 And when asked to explain himself yesterday did reply like this.

Peter MacKay had a simple, gruff reply when asked by reporters what the definition of terrorism will mean in the government's latest anti-terrorism bill, C-51. "Look it up," the justice minister said as he walked past waiting journalists on Parliament Hill Wednesday.

Because he knows he's wrong and he can't defend the indefensible.

But since he once borrowed his neighbour's dog to try to guilt out Belinda Stronach, he must surely know what a dog whistle sounds like... 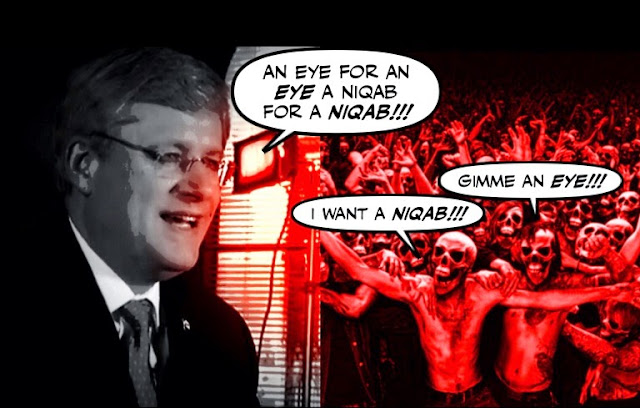 And that Stephen Harper is appealing to the most bestial instincts of Canadians, in a last desperate attempt to win another majority, even if he rips apart the social fabric of this country.

Think about it. That's how low he has fallen.

And yeah, Tom Mulcair did well today. But let there be no illusions.

Stephen Harper is taking us to a hellish place.

Until the day that maniac monster is defeated...

Even if the niqab is not a religious component it is still clearly a cultural clothing choice, and we have in this country chosen to accept multiculturalism as our norm and any reasonable accommodation to various cultural preferences, including dress, so long as it does not cause things like safety concerns, which in this case it clearly does not. We are seeing a level and kind of dog-whistle politics in this campaign similar to what the GOP have been using in their southern strategy that I've watched for decades that I never ever believed would be used in Canada.

Harper and his people are pandering to some of the ugliest and worst traits within human nature, xenophobia, and one of the greatest accomplishments of Canada was being a community of communities as Joe Clark once put it, and for such a nation xenophobia is especially toxic. So for a sitting PM to be going out of his way to pander to it is arguably a betrayal of the most basic of Canadian values, tolerance and acceptance of diversity within our nation. While it may not fit the legal definition of treason against Canada I would submit on the moral/ethical level it most certainly does.

This has to be stopped, and at all costs. Like I keep saying, whatever people think of Trudeau and the Libs, this is not the sort of thing they would ever do, and that alone makes them a far less toxic choice than anything that enables the Harper CPC to retain power. Get rid of Harper first, then go back to your more usual preferred choice,s but as this latest example clearly shows, removing Harper is clearly an "at all costs" imperative, especially if you believe in traditional Canadian values like tolerance, acceptance, multiculturalism and diversity.

so stevie slime is opposed to women wearing a niqab because women are supposed to be so equal in Canada. Right, who is he trying to kid? The cons are trying to ensure the abortion pill, which has been in use in France since the 1980s and is in use in 60 countries doesn't make it to the market in Canada. After 3 yrs of study they want to study it another year.

if women are so equal in Canada why aren't the murders of 1,200 First Nations women on stevie's "radar".

if women were so equal in stevie's mind then he would ensure women were in fact treated equitably. But given stevie's religion, I doubt that is ever going to happen. Stevie just doesn't like Muslim women. this twit, twitted his first frontal assault on Muslims. In stevie's mind, let the war on Canadians of the Muslim faith begin.

The real terrorist in Canada is P.M. Stephen Harper.

Halifax, nation relieved to hear mass shooting plot was planned by white people and not terrorists

hi Scotian...it is dog whistle politics, and it is the lowest the Cons have ever fallen. For that alone they deserve to be defeated. Because imagine what the country would resemble if their filthy tactics succeeded? They are disgusting and shameless and getting rid of them will be one of the best things that ever happened to this country. I live for that day...

hi e.a.f...yes you're right, Harper's hypocrisy couldn't be more blatant. Posing as a champion of women's rights when the first thing he did when he came to power was order the removal of the words "women's equality" from thousands of government documents. It's pure xenophobia and its absolutely disgusting...

Look at how bad it is already with the tactics of division they have used in the last three elections. We have already fallen so very far from what we were in 2005, were it not for the courts and PET's Charter we would have been totally and completely destroyed. Again, this is a point I'd been making for well over a decade, I just hope that finally enough people are really starting to see and understand this as I have all along. As I've noted before, living the Cassandra Curse in full really and truly SUCKS!