Jason Kenney and the Strangelove Cons 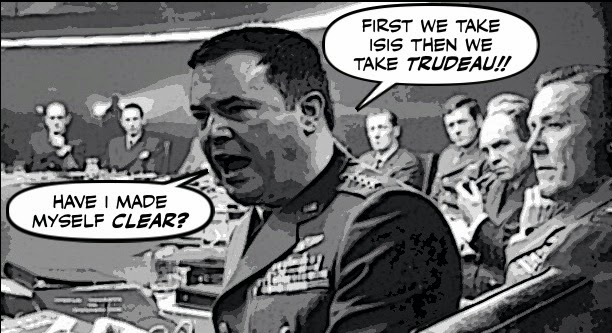 It was just a coincidence that the Turner Classic Movie channel should be running Dr Strangelove yesterday.

On the same day that Jason Kenney made his first major speech as the Con regime's new Defence Minister.

But in a way it seemed strangely appropriate, because I did have trouble distinguishing between the two movies.

Or deciding which one was more hilarious or more deeply disturbing.

Defence Minister Jason Kenney is warning Canada faces a high probability of another attack from homegrown jihadists as he plays down the threat to civil liberties from proposed anti-terror legislation.

“There is a high probability of jihadist attacks from within,” the minister told the Conference of Defence Associations. “The threat of terrorism has never been greater. Combating them becomes more difficult as they merge, morph and migrate.”

Because that scene in the Jason Kenney Goes To War movie, reminds of the one in Dr Strangelove when the deranged General Ripper explains to his shocked assistant why he's starting the Third World War.... 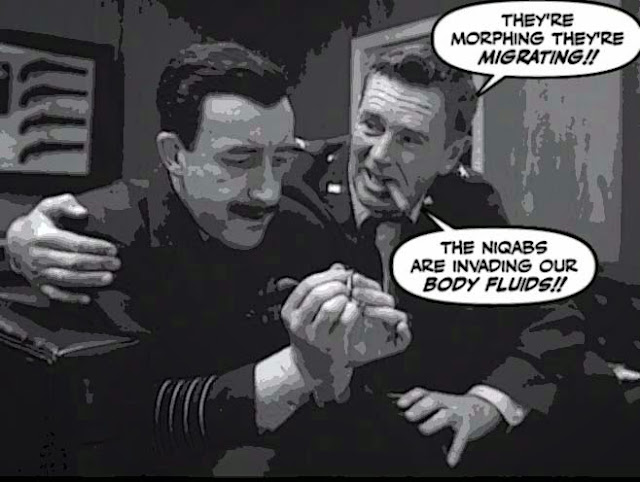 And as for Kenney's apparently irresistible desire to turn us into a police state or a Jesus State:

The threat that is going to keep mutating. We have to be flexible in addressing the needs of our police and security agencies to counter the threat.”

It only needs the presence of the mad professor Tom Flanagan to make it look and sound even more insane... 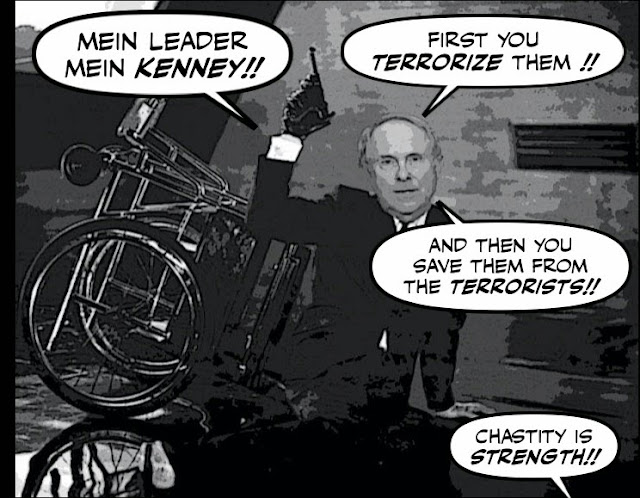 Or make it look like Kenney is trying to provoke a terrorist attack...


By shooting his mouth off all over the place.

But then that's exactly what the Cons want, nothing would suit them better, and that's what makes it so monstrous.

Because as Michael Harris points out, it is all about Stephen Harper, and the unmaking of Canada.

Stephen Harper’s not-so-benign dictatorship is picking up speed. Bill C-51 is merely the latest sprint toward the Rule of Steve.

Even the PM’s most ardent enablers must be choking on their lattes. They have to admit that the government has produced no evidence to justify the draconian measures contained in legislation it will not permit to be amended — unless, that is, they’re gullible enough to accept the government’s hysterical homilies about the battle against evil-doers. These days, Harper sounds like George W. Bush after the third martini.

For who would else appoint a religious fanatic like Kenney to drag us further into a religious war?

And why does it all remind me of the final scene in Dr Strangelove? 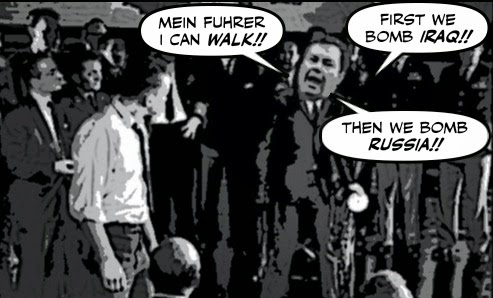 The last one before the bombs go off.

And the good news? Kenny really is the wrong man for the job.

His fanaticism, and his obvious desire to expand Canada's mission in Iraq, is sure to make Canadians nervous.

Make them question his sanity, and wonder where his equally deranged leader might take them... 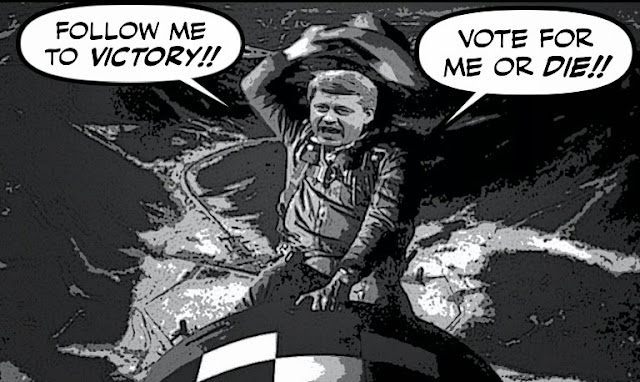 And give our horror movie at least a happy ending.

For he is crazy, and he is dangerous.

But his madness will destroy him...

I thought that of the Americans in the 2004 Presidential elections too, and look what happened there. I am growing more worried that Harper may manage a pull-out, not less, and I've learned to my sorrow that pandering to the worst instincts in people, especially fearfulness when there is any hint of a reason for it, can for a time be very potent. Do not underestimate this Simon, just remember how pernicious things like homophobia are to eradicate even now, and how easy it is even in this enlightened age for some people to blame the fags for why things are going wrong, I know I've heard it still a time or two, don't tell me you haven't. Or for that matter how things would be better if we had women back in their proper place. The darkness within the human heart is something we cannot ever afford to overlook, nor to underestimate, even in the best of people the right piece of straw can be backbreaking and turn them down that path at least for a time.

I hate to be the downer, but as I've noted before, until Harper and the CPC are gone from government I am not taking ANYTHING for granted, the stakes are simply too high/important.

What threat? The threat is as big or little as we want it to be.

What the PM is saying basically is that there are people in Iraq who feel the need to travel all the way to Canada, on the other side of the world, to kill Canadians. Because they supposedly hate our freedoms and society. Sure, whatever.

Apparently the Crusades never ended and another insane man is taking it to a new level. Welcome to the new dark ages called hauntingly enough "The New World Order.".

And just as I thought things were finally getting better we have a string of right wing wacko's in North America doing the absolute slavery bidding of the 1%ers. Stephen is their attack dog. Problem is he is willing because of his insanity hate to say it but it must be done by somebody. People around the world hate Harper because of his temper tantrums around the world in foreign meetings if he does not get his way. He is now shunned around the world and Canada is considered a third world banana republic. Nobody shows up at the United Nations when he gives one of his phoney speeches about freedom. This is the most repressive government ever I knew we were in trouble when he re-named it from "The Government of Canada" to the "Harper Government". He needs to be removed from office as he is not mentally capable of being Prime Minister. I don't say this lightly folks and this is not an ad hominem attack it is my observation. The longer he has been in power the more corrupt he has become. Add to that that "ad hominem attack's" is all he ever does in Parliament when he is not globe trotting on the Canadian taxpayers expense account. My cat is smarter than Harper.

hi Scotian...I share your fears, he is stirring up some ghastly demons. And when you unleash xenophobia there is no telling what might happen. But remember he must fight people's perceptions of him. A more decent man might get away with it. But by now most people know him too well, and so far at least there is no evidence that heated sentiment is moving his polls enough to give him a majority. So that is definitely s good sign...

P.S. you're not accusing me of being an optimist are you? I mean really. ;)

hi Steve....there are so many other things to fear in this world, that Harpo's terrorist menace doesn't phase me at all. And I very much doubt that his campaign of fear will be effective for very much longer...

hi Hugh...yes it is absurd isn't it? I kept waiting all during the Afghan war for the Taliban to find us and float over on a raft, but they never came. And the day an ISIS thug scares me will be the day I die...

hi mogs....you're right, the man has gone off the deep end. But as I told Scotian, and as you point out, his record precedes him. A more decent man could scare the bejeesus out of Canadians, but it doesn't help his case, when so many fear him...

Lungata and Simon we all see the same and fear another four years of war against Canadians under a Harper not so benign dictatorship. Anyone that has children should be deeply distressed if Harper wins the next election. They are now born in a Military Surveillance style dictatorship that brings back ugly memories of the Pot Pol dictatorship in Cambodia that slaughtered not hundreds of thousands but millions of innocents that did not agree with his regime back in the 1970's sickening thought eh?

Come on we are Canadians let us unite and run this Harper-con clown show out of office with a united vote ABC [Anything But Conservative] the CPC will whither and die which will be the best thing for freedom in CANADA!

[I am the same Simon but have changed computers and do not remember my passwords so for now until I uncover them I have to post as an anon and since I am never ashamed of what I say I will sign off as Mogs...]