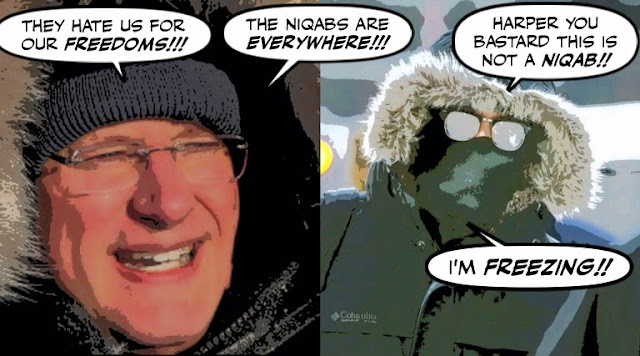 He is using his Great War on Terror to try to scare Canadians into voting for him, even as he turns the country into a police state.

He is using fear and bigotry as a blunt weapon against his own people. He couldn't sink any lower.

But of course that foul campaign isn't just intended to appeal to the most bestial instincts of Canadians.

It's also The Great Distraction.

He can't talk about his disastrous economic record, and he doesn't want to talk about the greatest threat we face: climate change.

But unfortunately for him, the economy will drag him down. And climate change will not be denied.

For as most of Canadians who live east of Alberta know, the dreaded Polar Vortex has returned with a vengeance.

A persistent, quasi-stationary high pressure system off the West Coast has caused the jet stream to flow from the northwest down into the southeast, helping to bring frigid temperatures that have shattered cold weather records in Ontario and Quebec, according to a meteorologist at Environment Canada.

And it's not just Ontario and Quebec that have been bearing the brunt of the blast. Temperatures have plunged across the Prairies, Atlantic Canada and into the U.S.

And as the CBC's Margo McDiarmid explains, it is all about climate change.

And when more Canadians understand the connection, we will be able to use his criminal record on the environment against Harper and his Cons in the upcoming election campaign.

Because while Canadians may have been far too complacent about climate change, thinking that a few extra degrees, and a few extra palm trees, might actually be good for Canada.

The thought that they could be condemned to even colder winters FOREVER is sure to make them unhappy. Or really ANGRY. 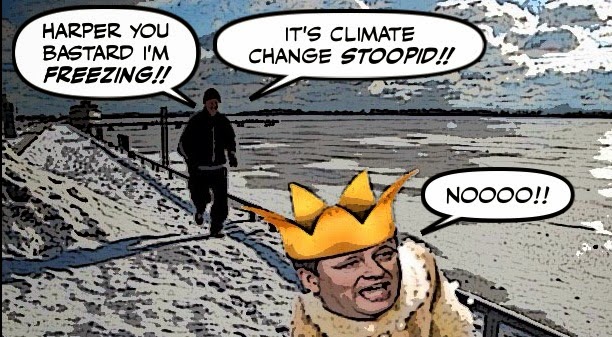 And of course those who live in B.C. or Alberta won't be too happy either. Because if the polar vortex becomes the new normal it could consume their forests and turn parts of Alberta into a desert.

But it caught up with him.

And it too will help destroy him... 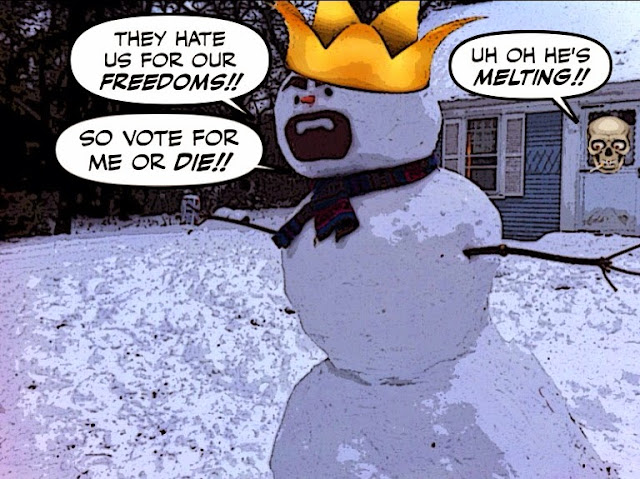 The worst ski season in 100 years in BC, there is no snow on our north shore mountains, I have never seen that, not just lost jobs and revenues, we need a snow pack for water, drinking water, forecasters say this could be the new normal.. Back east You freeze ur azz off and we BCers will grow dates, and produce palm oil,,

Sounds like there may be a drought in BC this summer........similar to what California has been experiencing the past couple of years. Here in NS, we are having record snowfalls and freezing rain and colder then we have had for sometime! No doubt in my mind that these climatic changes are due to climate change. But, the government is not responsible, eh?

Even the wildlife are screwed up this year!

Actually a lot of B.C. forests are already dead and have been since the 1970s. Its called the Pine Beetle. The reason it was able to survive and kill pine trees is because the weather wasn't cold enough to kill the beetle.

we can only hope the Green party runs a good campaign and Elizabeth May makes it to the national debates, reminding Canadians of the horror Stevie and his cons have brought to this country with his oil pimping ;ways.

the economy is not doing well. Stevie can't blame that on the women who wear niqabs or hijabs. He may try, but that won't work. With Stevie and his cons attack on women wearing niqabs and hijabs many Jews and Sikhs may decide voting Con is not the thing to do. They could be next on "great discriminator's" hit list.

there is one thing Stevie can't escape and that is after him and his passing 81 crime bills he looks more like a gang leader than a political leader. We would be hard pressed to find a Hell's Angels chapter which has as many criminal charges and convictions as the Conservative Party members. Lets remember:
31 charges against duffy
Wallin and Brazeau still under investigation
Aruther Porter, CISIS board appointment--back in Canada in handcuffs for a $22 M fraud
Paul Sona, in jail
Del Mastro, harper side kick, Guilty
and if Duffy was charged with accepting a bribe, how did Nigel Wright get away with offering a bribe.

Upp there are gangs all over Canada who don't have that type of record. Welcome to the cons. really truly cons.

Its pretty clear harper and his cons don't like women of colour because he sure hasn't paid attention to 1,200 murdered/missing Canadian First Nations women. They aren't on his "radar".

Income inequity has increased by almost 4% from 2010 to 2014. That doesn't read like a great economy. Perhaps that is truly why he is waving the niqab and hijab.

Oh, well lets hope the next thing he waves is good bye