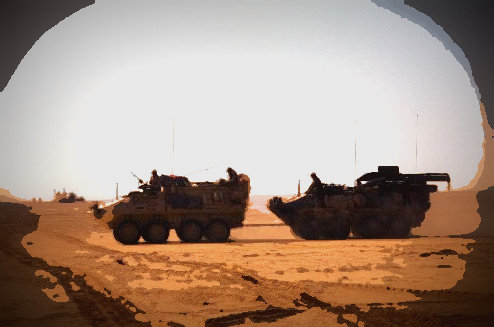 Well it's taken a while, but now we know why the Liberal government is so reluctant to scrap the deal to sell armoured vehicles to Saudi Arabia.

Not just because it would cost thousands of jobs, in an area of Canada which has been ravaged by the collapse of our manufacturing industry.

But also because there would be a huge cancellation penalty. 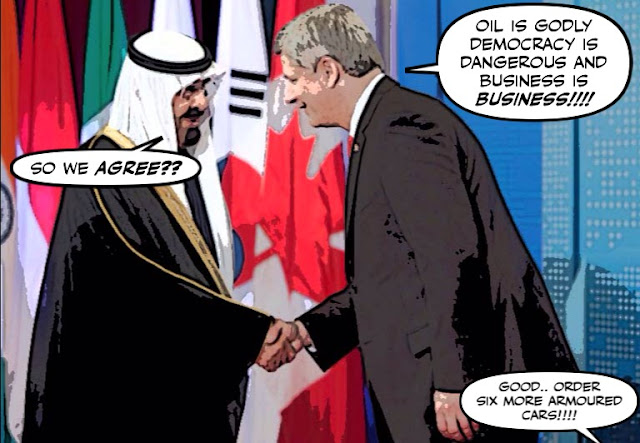 Negotiated and inflicted upon us courtesy of Stephen Harper.

The government of Canada would be on the hook for a multibillion-dollar cancellation penalty if it were to break a controversial deal to sell light-armoured vehicles to Saudi Arabia under the contract signed by the previous Conservative government, the Star has learned.

A source who spoke to the Star on condition of anonymity said the cancellation penalty is part of the contract reached after Harper personally sought support from Saudi Arabia’s ambassador to Canada to secure the 14-year deal to deliver weaponized vehicles — a deal that was otherwise looking certain to go to Germany.

And other Cons like Ed Fast, who now says the deal is the Liberal's problem.

“I’m not going to comment on the details of the contract. That’s for the current Liberal government to respond to,” said former Conservative international trade minister Ed Fast, who worked on the deal along with Stephen Harper’s foreign affairs minister, John Baird.

“All I will say is it is a very significant-sized contract. It has very significant benefits to Canada’s economy and I will certainly acknowledge that a termination of the contact unilaterally by one party will have very significant consequences,” Fast said in an interview with the Star.

And John Baird who says it isn't. “In fairness to the Liberals,” Baird said, “this was successfully negotiated by General Dynamics Land Systems under the previous Conservative government and you shouldn’t blame the Liberal government for that. Contracts should be sacrosanct, and the new government is honouring that and it’s the right thing to do.”

But having flogged the deal so furiously, insists the Liberals must honour the contract.

“This is good for the economy of Canada, but it is also good for the security of Canada because we don’t want ISIS moving into Saudi Arabia,” Baird said.

And really what more can you say about a government that would saddle another government with a deal like that one?

Except they really are shameless... 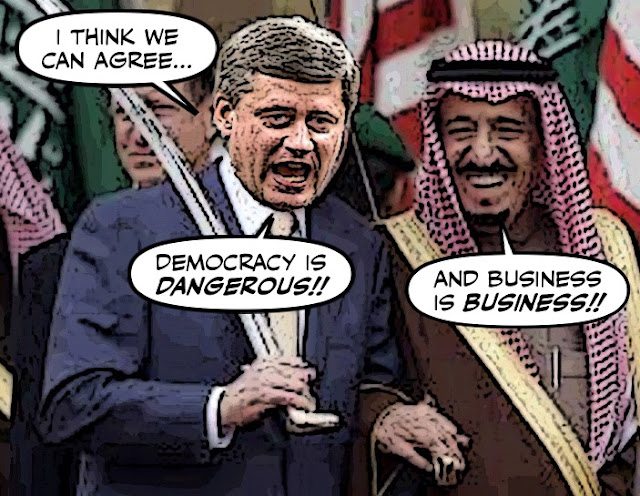 And for making us all financial hostages of the ghastly Saudi regime.

He really should have been jailed... 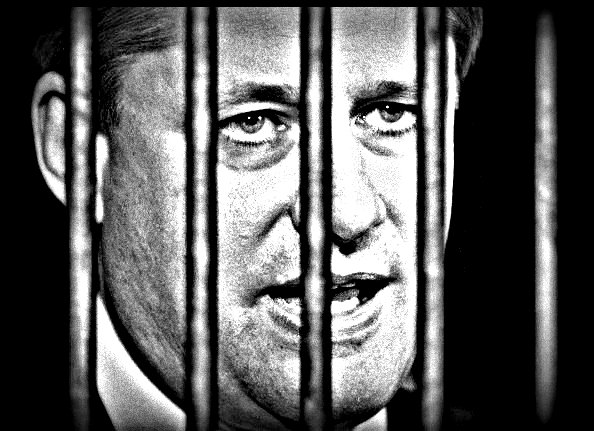 The days when idiots ruled Canada...... Hitler Harper, two faced John Baird and Ed Fast with his head firmly stuck up his arse!,,,,,, I know they are all gone for good but it's going to be some time before Canada rids itself of the stink they left behind. Good one Simon, keep up the good work. FS

I'll bet my bottom dollar this deal is linked to giving the Saudis our Canadian Wheat Board. We should have a full enquiry on what Harper did.

The hypocracy of the Tories on this is Saudia Arbian

This contract protected the Saudi's and the company producing the vehicles should a new government come to office. Its like the HarperCons "gift" just keeps on giving.

Now if ISIS "invaded" Saudi Arabia, what would be the difference in the attitude of the government. Not much that I could see except who got the oil money. ISIS and the Saudi government have about the same attitude towards money, any one not of their religion,

145. "Last year I signed a 14-year weapons contract worth 15 billion dollars to supply light armoured vehicles to Saudi Arabia. If the Saudis use them to crush human rights, that is not our concern, since we must abide by the Prime Directive."

Chretien cancelled the EH-101 helicopter purchase made by the Mulroney Conservatives, and the government was hit by a cancellation penalty that was close to a billion$ back in 1994.

Trudeau and Dion could have chosen the same route. They are in government now, so they make the decisions. They decided to keep the contract as is, so they own it as much as Harper & Co. did.
BW


It's reassuring to see that Harper has managed to screw-up this international deal as he did every other international effort. He's at 100% so far.

Truly despicable man. Hope your illustration of Harper behind bars reaches fruition Simon. One can only hope.

Apparently Baird doesn't read the news written by other than MSM Canadian outfits.

Saudi Arabia funds ISIS - why would ISIS invade the kingdom? People need to read infoclearinghouse, dissidentvoice, counterpunch and yes even the Guardian from the UK if they don't want to be complete dumkopfs, which Baird apparently is. Or perhaps it's our senior public service nitwits leaning back in comfy chairs waiting for their pensions, since Dion seems no better informed. ISIS and the Saudis are Sunni Moslems as is Turkey who buys ISIS oil and has Saudi jets on its airfields. Assad and Iran are Shiite Moslems. Sunni and Shia do not see eye-to-eye.

Man we get fed so much BS by our MSM - basically it's copy and paste from White House press briefings, which is propaganda from beginning to end. Just google "does saudi arabia fund ISIS".

And then cry at how we are fed pabulum and horse manure in equal measure in this country of ours by the people pulling the strings. Plus Saudi Arabia fed the oil price collapse which has shaken our economy. We owe them zero favours, especially as they are now and have been bombing next door Yemen just for spite, and old LAVs are in action there, so there are nil reasons to suspect the new ones we supply will be used any differently.

Thank you so much, Stephen Effing Harper for screwing up everything completely from beginning to end, up down and sideways.

hi FS...yes they really did leave a stink behind them didn't they? I can't believe how low they took this country, for crass political purposes. But at least they won't be back for a very long time....

hi anon...I wouldn't be surprised. Who knows what Harper told their ghastly king while on his knees before him?

hi Steve...yes their hypocrisy knows no bounds, and neither does their shameful behaviour...

hi e.a.f...the way Harper has engineered all kinds of things to keep his influence alive long after he was booted from office is a real scandal. We can't get rid of his NEB patronage appointments, or his stooges at the CBC. And this Saudi deal is the absolute limit....

hi David...the fact that Stephen Harper grovelled before those Saudi autocrats should shame him and this country. But he has no moral compass so who can be surprised?

hi BW...this is a far more expensive proposition. We would have to give up a $15 billon dollar contract, throw 3,000 workers and their families into the street in one of Canada's highest unemployment areas. And to add insult to injury we would have to pay the Saudis billions of dollars so they can use that money as a down payment for armoured cars made in Germany. Good luck with that one, but if you feel so strongly about the mess Harper left behind, may I suggest you raise the billions yourself...

hi jrkrideau...yes it is pathetic isn't it? And don't forget that Harper is now marketing himself as a real statesman. With a statesman like that on your side, who needs enemies?

hi TS...yes it is despicable. There used to be an unwritten agreement that one government would not spring any surprises on its successors. But Harper hasn't enough decency to respect those kinds of agreements, and he definitely should be held accountable. But as for ever seeing Harper behind bars it is only wishful thinking.
I'm sure he will get away with it, but as I have said many times, he will not escape the harsh verdict of history....

hi anon...yes the Saudis are the nexus of terrorism, and you're quite right they deliberately caused oil prices to tank, with absolutely no consideration for other countries. I do hope that one day after we have taken as much money as possible from them, that we can finally tell them where to get off...