The G20 Summit and the Police State in Toronto 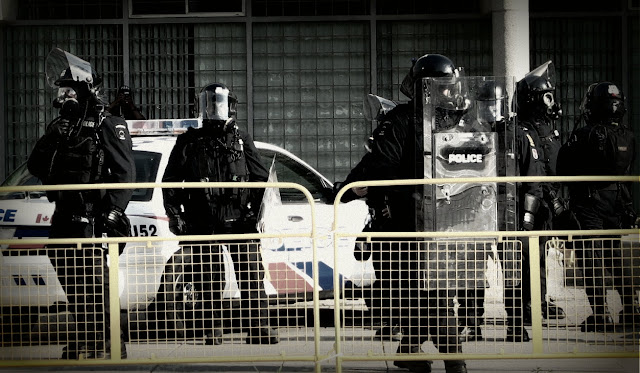 It's been almost six years, but I'll never forget that weekend. The weekend of the G20 Summit in Toronto.

When they turned my neighbourhood into an armed camp, more than 1,000 people were arrested.

And I felt like I was living in a police state. 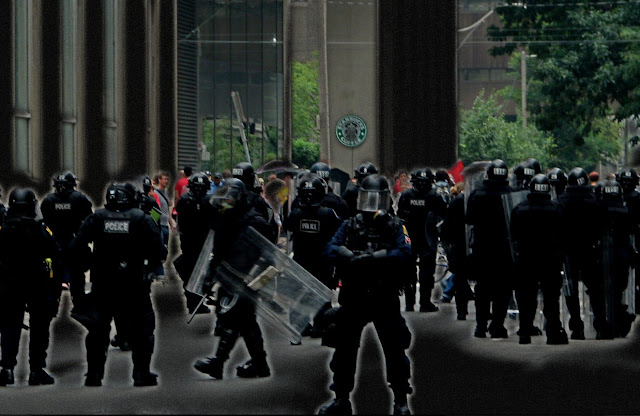 Now Supt. Mark Fenton, the only senior police officer convicted for his actions that weekend, has finally been sentenced.

And the result couldn't be more disappointing.

For three counts of misconduct under the province’s Police Services Act for ordering two mass arrests — including the prolonged boxing-in at Queen and Spadina during a torrential downpour — Fenton will instead lose 30 vacation days and receive an official reprimand.

“A reprimand for violating the Charter rights of hundreds of Canadians? That’s absurd.”

For let's never forget what happened. Not only were more than a thousand people arrested and caged like animals... 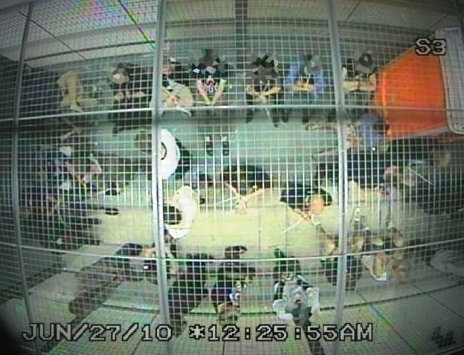 After Fenton unleashed his riot cops on them like pit bulls...

He kettled his prey... 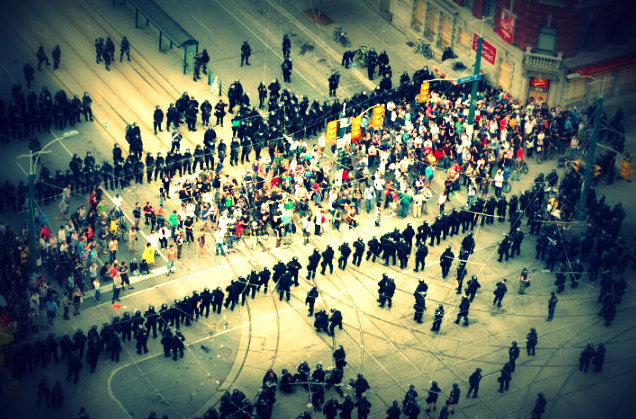 And held them for hours in the pouring rain...

And for that, 30 vacation days and a reprimand, don't seem to me to be punishment enough.

But then we'll never know who was really responsible for that fascist nightmare.

Because Fenton was getting his orders from Bill Blair, the then police chief of Toronto... 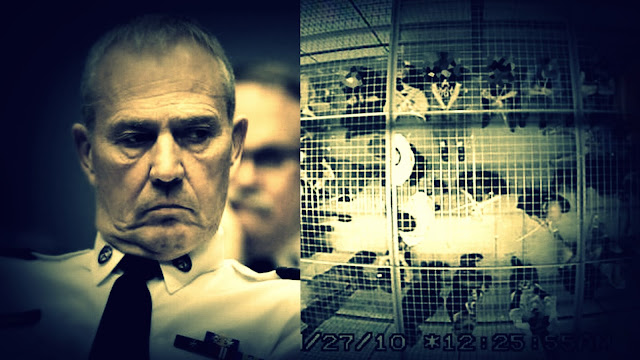 Who was granted the right not to testify by the same judge who gave Fenton his light sentence.

And Blair in turn was receiving his directions from a massive command post 80 km from the city... 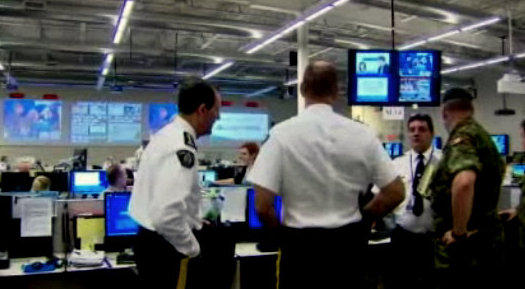 Which was in direct communication with Stephen Harper's PMO.

So I've always felt that he had something to do with turning my neighbourhood into a police state. 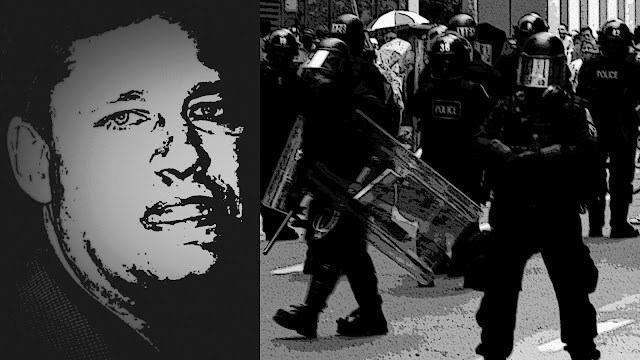 But like all the others he also got away with it.

You know, almost six years later, I have to at least hope that something like that could never happen again in Canada.

What if Donald Trump becomes President and turns the U.S. into a fascist nightmare? What if the economy collapses? What if war breaks out? What if climate change finally bites us so hard we can't ignore it any longer, or escape its deadly consequences?

And what I do know is that when police officers can violate the Charter rights of so many Canadians in such an outrageous manner, and get off so lightly, nothing can be ruled out. 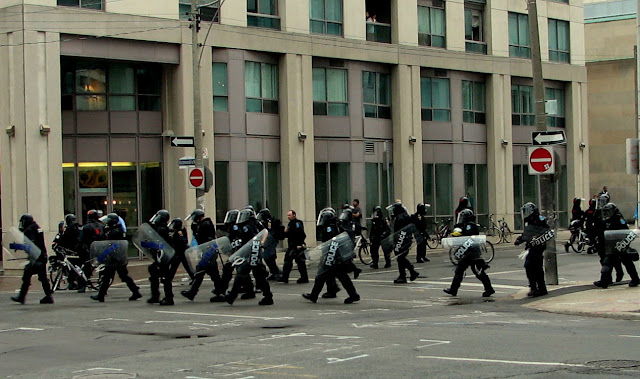 And nobody can be sure that it couldn't happen again.

For on a brutally hot and humid weekend, it was absolute madness.

And no song has ever summed up that madness better than this one...

And yes, in a world that seems to be spinning out of control, and getting crazier by the day.

Those who don't learn from their mistakes.

Could very well be condemned to repeat them...

Who does Blair work for now?

Your misgivings about future possibilities are, I believe, well-founded, Simon. Even though I wasn't caught up in the dragnet, that weekend, it will always be seared in memory for the terrible violations of rights that you have described. Indeed, if memory does serve me, it was that fascist nightmare that became a tipping point in my own radicalization as I realized how fragile and porous our Charter rights really are.

The 'punishment' meted out to Fenton is an insult to all Canadians.

The G20 in Toronto was considered an experiment in Urban mass crowd control and according to PERF a law enforcement think tank of which both Blair and TPS spokesperson Puglash are members, a highly successful one The "gold standard"

Sadly, Blair is with the Liberals. Will there ever be an investigation under his watch? Unlikely.
But that's what's still needed: a full public inquiry.
We need to know if Stephen Harper and the RCMP were in cahoots. Only a public inquiry will at least point us in that direction, but we all know slippery Steve will get away and laugh at us for all eternity.

hi anon...Blair of course works for the Liberals, but it was the judge who gave Fenton such a light sentence who said he didn't need to testify. But that decision is being challenged, so he may end up telling what he knows if this slap or stroke on the wrist is appealed...

hi Lorne...I'm not a vindictive person, but being stuck smack in the middle of that nightmare was truly disturbing, and an example has to be set if something like that is not going to happen again. I was very nearly arrested for simply bing curious, or trying to take a short cut to work. And I'll never forget how I once smiled at one female police officer and she literally snarled at me !!! I'm hoping that since a class action suit has been recently authorized, that this is not the end of that story....

hi Kev...was it really? The gold standard in crowd control? That's outrageous, the only award it should have received is the Pinochet Award. I was roaming around Queen street earlier in the afternoon and only left because I saw it was about to pour. But while I was there all I saw was harmless guerrilla theatre, so there was absolutely no reason to kettle all those people. And keeping the arrested in cages, in a warehouse, was something you might expect in a Banana Republic. As I said, I hope that isn't the end of the story and that Blair is somehow forced to tell us who was really giving the orders...

hi anon...well as I said, a class action has been authorized, people have been given the right to sue the police for the way they were treated, so that could lead to the case being re-opened again....

Yep that's what they called it I know one of the plaintiffs in that lawsuit, believe me she ain't giving up

Makes me sick the way they locked them in there like animals. I've been stuck in jail for 3 days in a cage like that for possession of drugs. 12 people in a long rectangle prison locked up 23 hours a day.