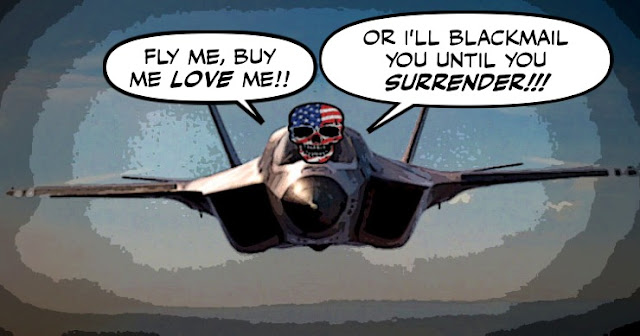 I'm glad to see the Trudeau government has told Lockheed Martin to take its threat to blackmail us, and shove it.

And that if it doesn't provide the jobs it promised, the company that wins the contract for new fighter jets, will provide them instead.

But what I find so ridiculous about this whole F-35 fiasco, is that whatever plane Canada chooses is going to be obsolete in a matter of years.

For this is the shape of aerial warfare to come... 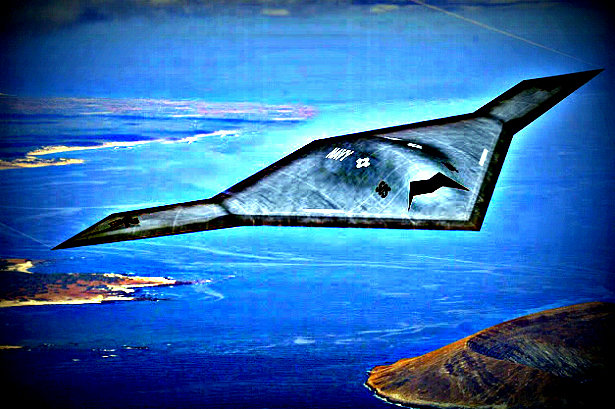 High powered drones, that are equipped with artificial intelligence so they can seek out targets without human intervention.

The depiction wasn’t a single, ominous glider high over a training camp in Afghanistan, or another flashpoint in the long war on Al Qaeda. Instead it was dozens of synchronized drones, looking like a swarm of wasps, slicing through the layered air defenses of an enemy, unnamed but possibly China or Russia.

“It will be machines against machines in warfare,” U.S. Air Force Col. Brandon Baker said at the May Pentagon briefing. Swarms of the robot aircraft will effectively fly themselves, with people simply setting up the plans in advance. “You will tell them where to go and they will fly there by themselves,” maneuvering and evading air defenses on their own.

And as a bonus, will be considerably cheaper than any fighter jet we are now thinking of buying.

Almost as important as their performance, Baker said, an expendable drone equipped with improved missiles or radars would be cheaper and faster to build, instead of incorporating technology into aircraft such as the F-35 fighter jet, which costs $100 million or more, or the planned B-21 bomber, with an estimated $550 million purchase price, and a lifetime cost that might reach a billion dollars.

But of course this is not a good development, for those swarming drones will make the world a more dangerous place.

“Autonomous weapons are a salient point of departure in a technology-fueled arms race that puts everyone in danger,” wrote Mark Gubrud, of the Curriculum in Peace, War, and Defense at the University of North Carolina, this month in IEEE: Spectrum. “That is why I believe we need to ban them as fast and as hard as we possibly can.”

And isn't it disturbing that at a time when the greatest threat the planet faces is climate change, the military industrial complex is still coming up with better way to kill ourselves?

When will this madness end?

And of course, what was Stephen Harper thinking when he got us into this mess? 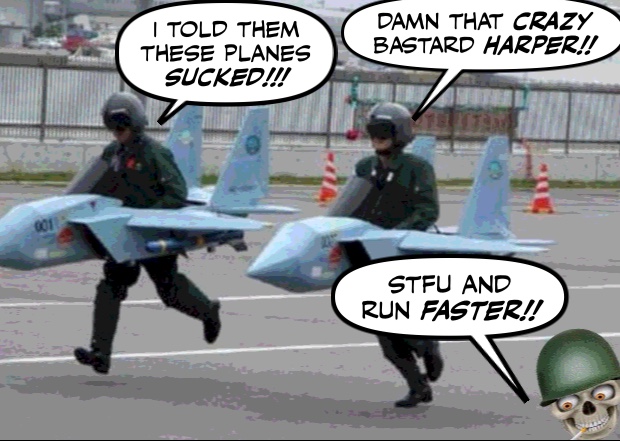 The man was a maniac, who didn't know what he was doing.

And this whole competition to buy new and soon to be obsolete fighter jets, is an absolute fiasco.

I welcome our new Skynet Overlord!

While they're at it, the federal Liberals should look into repatriating the Census gathering and assessment from Lockheed Martin. After all, it can;t be that big a deal for Lockheed - right?

The economic ripples of Harper's archaic vision of an economy based on tarry oil and war industries continues to reverberate through the Canadian economy, although thankfully with decreasing amplitude. The fact that there are well known links between the PMO's office and the F35 affair that no one is investigating is unsettling.It shows that either lawyers (some taxpayer funded) built an impenetrable firewall between the various participants in the multi billion dollar fiasco or the Federal justice system has still not recovered from the Harper years.
RT

We need jets, just not those that Harper and his Cons wanted. I am sure there is a decent jet at a cost much less than $35M a piece. Some one much have a "chevy" somewhere instead of a Cadillac.