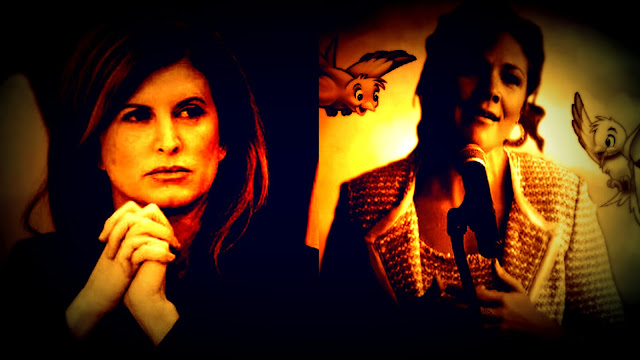 As you know the last month has been a horrible one for Sophie Grégoire Trudeau.

Rona Ambrose and her monstrous Cons have gone after her, her children, and her mother in law Margaret.

And Sophie even had to lecture her husband about minding his elbows.

But none of that seemed to bother her last night, when she appeared before her enemies at the Press Gallery dinner. 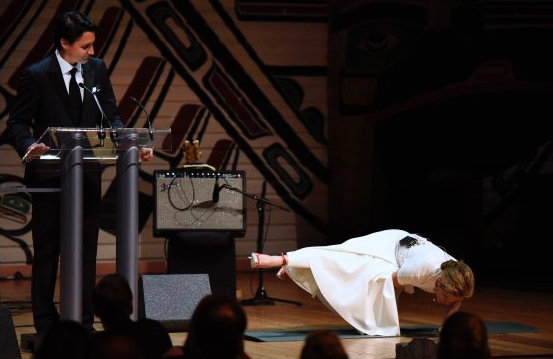 And managed to steal the show.

Justin Trudeau became the first prime minister in a decade to crack jokes at the Press Gallery dinner — but it was his wife who ran away with his part of the show.

After a few jokes, the prime minister brought Sophie Gregore Trudeau to the stage at the Canadian Museum of History: "I want to ask you to join me to welcome the mother of my oh-so-convenient and effective props, my children."

By firing off a few zingers in the general direction of her tormentors.

"When I thought of the opportunity that I was going to have here on stage in front of all of you tonight, I thought, it's the best chance I have to express myself in song. And you were so kind to me the last time I sang," she said, referring to the public scrutiny after she burst into song at a news conference in January.

"In order to do this, I need a pianist, a cellist, a violinist, because I need a team. I need to feel supported," Gregoire Trudeau declared to laughter.

And after singing and pulling off a really hard yoga pose, still managed to spare nobody.

"You should be doing more of this, then you'd be hitting less people, right?" she said to her husband, fresh off Elbowgate.

"And this is really good for anger management. Tom, you wanna try it?" Gregoire Trudeau said to NDP Leader Thomas Mulcair, who has a reputation for having quite a temper.

While angry old Tom Mulcair gritted his teeth, and shocked the audience by firing off a few F-Bombs. 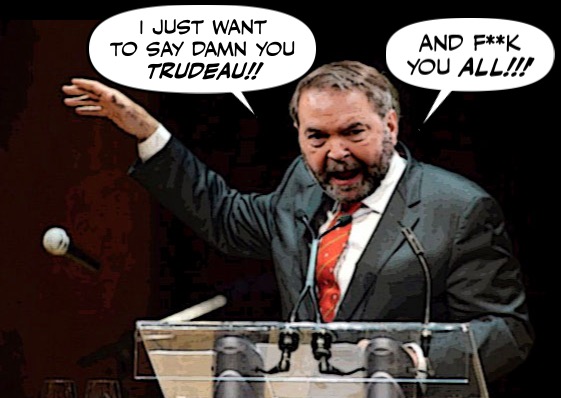 At a roast of journalists and politicians, NDP Leader Tom Mulcair declared he gave "zero f*cks" and then proceeded to drop several of them in a memorable speech.

"It's great to be here at the press gallery dinner and you know why? Because unlike every other person here tonight, I give zero f*cks," Mulcair said.

Which tells you all you need to know about his state of mind. And the state of the NDP.

And no doubt had his caucus members running for the exits with bags over the heads.

While Rona Ambrose did her best to try to make people believe she's no longer Stephen Harper's puppet.

"Stephen Harper actually loved humanity," she quipped. "It was just people that he couldn't stand."

In offering up suggestions for new slogans for the current Conservatives, Ambrose suggested: "The bad man is gone."

For which she will no doubt pay a heavy price later... 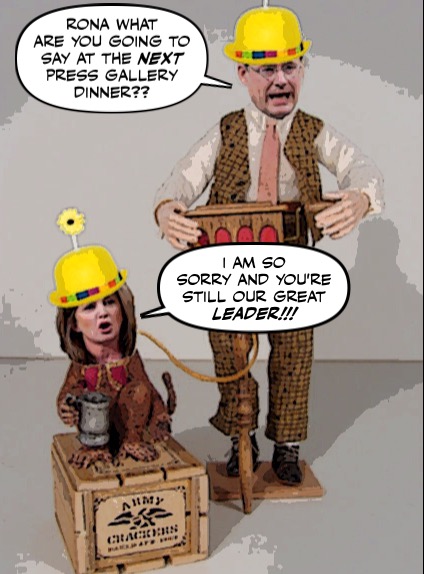 But yes, isn't it great that the Trudeau's have managed to keep their sense of humour despite all the foul attacks aimed at them?

They really are quite a team.

And if the ghastly Trudeau haters thought they could push Sophie around.

From the Huff Post article you linked at the top:

"Stephen Harper gave memorable roasts at the dinner during his time as Opposition leader but he stopped appearing at the functions when he became prime minister."
That pretty much sums up Steve right there.

She really quite the woman. We are blessed to have her at 24 Sussex.

Mulcair? It's really hard to believe he wanted to stick around. From comments on social media, no one is amused by his potty mouth.

Sophie G.T. was amazing. She is so graceful. To do that pose in an evening dress is beyond it..........fun, graceful, wonderful.

I actually liked Rona Ambroses quips. She also has nothing to loose because she isn't running for leader. good on her for her "cracks".

Mulcair, well lets say he was honest. He doesn't have anything to lose so it was funny. (there were clips of all of them on Huffington post. and Sophie G.T. was on last evening's news. She must be the only spouse of a major countries leader who can carry that off like she did. it was funny!

events like that actually help people to get along a bit better.

Lighten up and enjoy the moments! There is enough "doom and gloom" all around us.