Boris Johnson and the Brexit Farce 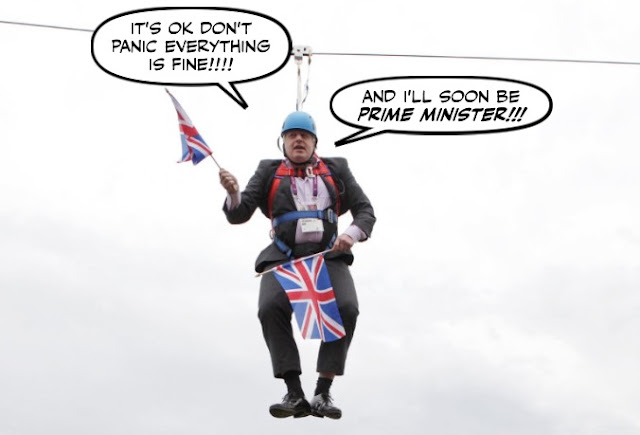 Well it's now five days since Boris Johnson and his merry band of Brexiteers won their referendum to haul Britain out of the EU.

And now the situation couldn't be more disastrous. The pound is still sliding, the country has lost its triple-A credit rating. The stock market and the banks are reeling.

And the UK is in danger of falling apart, with both Scotland and Northern Ireland threatening to separate.

But don't tell the Con clown Boris Johnson that, because he wants people to believe that everything is under control.

For here he is trying to convince Britons that he didn't mean what he said about throwing out the immigrants, while claiming that the economy is doing just fine.

When in fact Britain is in a state of turmoil. It's clear that Johnson and his gang of Little Englanders and racists hadn't given any thought to what they might do if they won.

So now racism and xenophobia are running wild.

For some, the racist taunts of the past few days recalled a time when jackbooted members of the far-right National Front taunted immigrants on the streets of Britain in the 1980s, during the painful deindustrialization of the Thatcher era.

“The normally primordial murmur from the racist swamp has now been released, and people feel empowered to say things they wouldn’t have said before last week,” he said. “I have never heard so many people tell me to go back to Africa as I have heard in the past few days.”

Minorities are feeling threatened. The young are feeling betrayed. The working class has thrown itself into the arms of the New Thatcherites, soon to be free from any EU regulation.

So they can turn the country into even more of a Con jungle.

Firstly, it was the working classes who voted for us to leave because they were economically disregarded and it is they who will suffer the most in the short term from the dearth of jobs and investment. They have merely swapped one distant and unreachable elite for another one.

Secondly, the younger generation has lost the right to live and work in 27 other countries. We will never know the full extent of the lost opportunities, friendships, marriages and experiences we will be denied. Freedom of movement was taken away by our parents, uncles, and grandparents in a parting blow to a generation that was already drowning in the debts of our predecessors.

Thirdly and perhaps most significantly, we now live in a post-factual democracy. When the facts met the myths they were as useless as bullets bouncing off the bodies of aliens in a HG Wells novel. When Michael Gove said ‘the British people are sick of experts’ he was right. But can anybody tell me the last time a prevailing culture of anti-intellectualism has lead to anything other than bigotry.

It's all so predictable, and it's all so depressing.

And since we now know that many LEAVE supporters didn't even know what they were voting for.

I'm not surprised that some REMAIN supporters have been invoking the spirit of Winnie the Pooh... 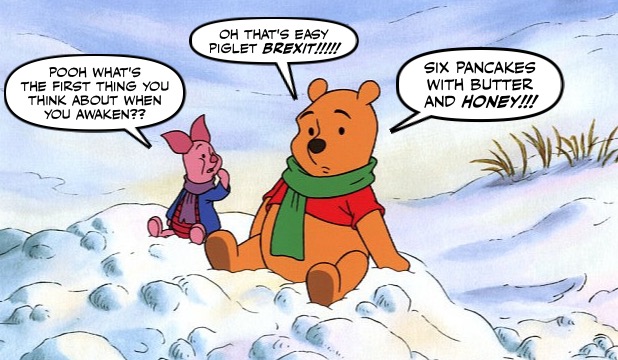 And not surprised that this cartoon went viral... 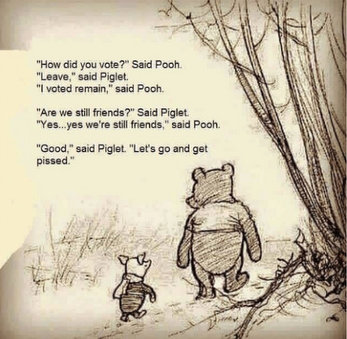 Because let's face it, this Brexit fiasco isn't just idiocy, it's madness. And enough to drive anyone to drink.

The English soccer team was bounced out of the Euro Cup competition by tiny Iceland yesterday.

The Brexiteers who were hoping for a big victory to show that Britain's back again, were horribly humiliated.

And the poor British people just didn't know WHO to blame...

But I'm pretty sure that it won't be long before they blame Boris.

So while we don't know what twists and turns this story might take in the next weeks and months.

We can be pretty sure how it will end... 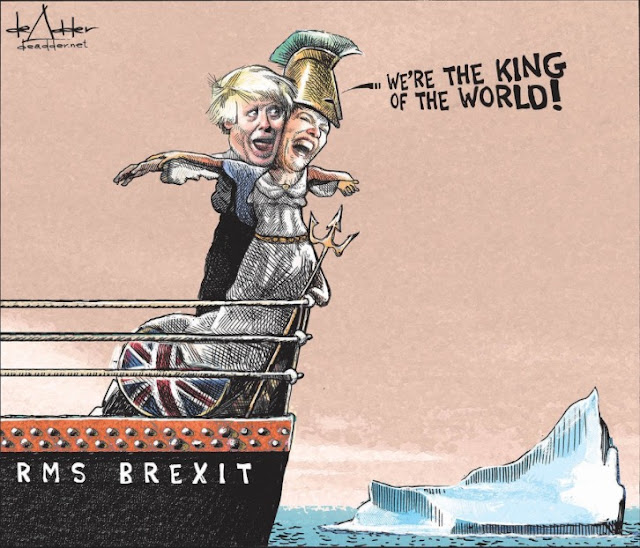 The Cons clowns of this world.

Making it up as they go along. Too dumb to govern.

And heading for disaster....

Ah yes, the hubris of the left. So assured. So arrogant. You know this vote was meant as a slap in the face to people like you, right?

Oh I really love how you completely danced around the fact that the Labour Party is basically in open rebellion right now. Can't let facts get in way of that hubris eh?

Silver lining: The English Leave voters have destroyed the Con in Britain. Scotland will soon be an independant country and Ireland united.

I thought the vote was actually driven by economic inequality and austerity measures so beloved of the right. Our press and media have a duty to report to the general public what is and what isn't trustworthy, they utterly failed in UK, they are failing in the US, and they nearly failed in Canada for the third time last year. Bigotry is a staple of fascism, and it has becoming more prevalent for the last fifty years, and more so with corporate takeovers of media outlets and the increasing use of buzzwords that are meaningless. GS

It is still small potatoes compared to the hundreds of billions of average taxpayer's money used to bail out banks who knew exactly what they were doing, and what the end result would be and are still continuing economically destructive policies. The banks are bailed out and then forecvlosed on many of their saviors. GS

Turns out the so-called Labour party coup is part of a much bigger plot than originally thought...

You trust the press? Don't be such a sucker.

Hi anon 10:13 am...the hubris of the left as opposed to the racism of the right? I'm not arrogant I'm just on the side of decency. I hate bullies, and would dearly like to give them more than a slap in the face for being such low cowards. And why would I worry about the state of the Labour Party when I support the Scottish National Party that all but chased them out of Scotland? Get your facts right And understand that I couldn't be happier with the situation. Scotland forever and bye bye Little England....

Hi anon....you're right that is quite a silver lining, it's so shiny in fact I may have to wear sunglasses. ;) I would dearly like to see Ireland united, I'm not talking to the Welsh for at least a month, and the only people I worried about are the decent people of England. But hopefully this catastrophe and racist outrage will motivate them to get their act together and drive those bestial Cons from office like we did here...

Hi Chris...Jeremy Corbyn has been treated atrociously by those Blairite traitors from the moment he became leader, and I support him 100%. The young helped elect him and the will help defend him. Those fools can't see the forest for the trees, and realize that movements are more powerful than parties and Jeremy is Britain's Bernie Sanders, and is only missing a bit of Bernie's passion. But hey it's Britain not Brooklyn... ;)

Hi anon 4:45 pm....yes that's something good, and I also love the fact that where once Boris Johnson was the teddy bear of the big banks, now they are all screaming at him and calling him a maniac. That idiot didn't know what he was doing, and despite his reassuring words, I'm sure he must be scared shitless....