Harper's Legacy: Now Lockheed Martin is Threatening to Blackmail Us 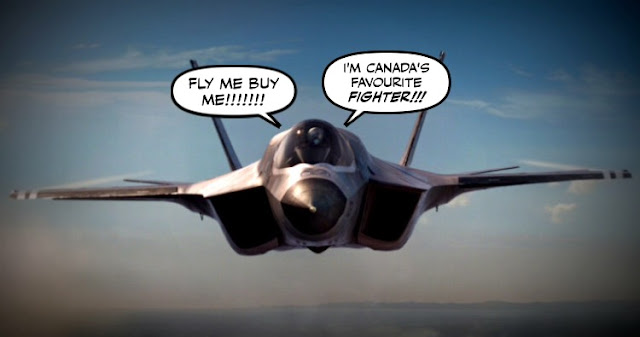 For what sometimes seems like forever, the F-35 fighter jet has been hovering over Canada like some kind of giant bat.

And even though it has been a comedy of errors, more hot air has been expended talking about it than is blown out of its rear orifice.

And now this pathetic saga has taken another turn with its maker Lockheed Martin threatening to blackmail Canada. 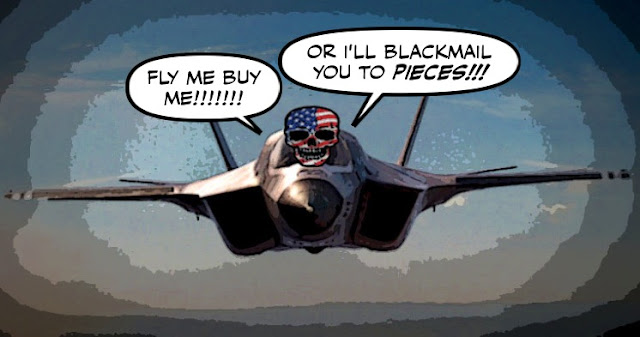 U.S. defence giant Lockheed Martin is warning Canada that $825 million in aerospace industrial contracts signed with Canadian companies to build and equip F-35 jets would be moved to other partner nations if the Trudeau government decides to buy a different fighter jet.

Although they don't call it that.

"It's not really a threat," Over said in an interview with CBC News. "I don't want it perceived as a threat, but we will have no choice, if Canada walks away from F-35, except to relocate work in Canada to other purchasing nations."​

But of course it is a threat, it is blackmail, and it is all Stephen Harper's fault for getting us involved with that ghastly CIA company, and making us believe its phony promises... 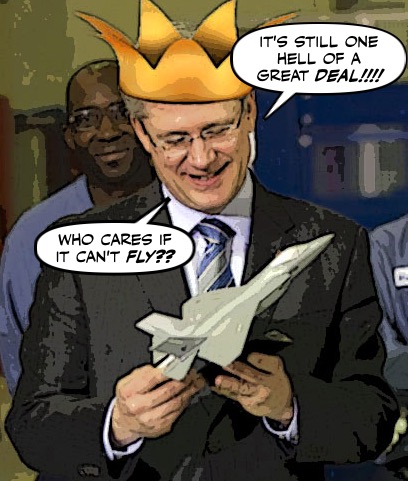 Even going back to 2013, months after the Harper government put the acquisition of the F-35 on hold, company officials were soft-pedalling the consequences, suggesting that if Canada went in a different direction, existing contracts would remain safe but no new work would be offered.

And the fault of his idiot defence minister Peter MacKay for promoting the wrong fighter... 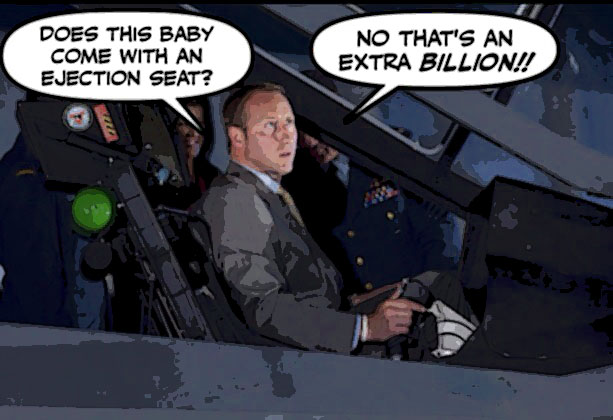 Lying about its real price over and over again.

And making the entire Con regime look like fools or suckers by mixing business with politics... 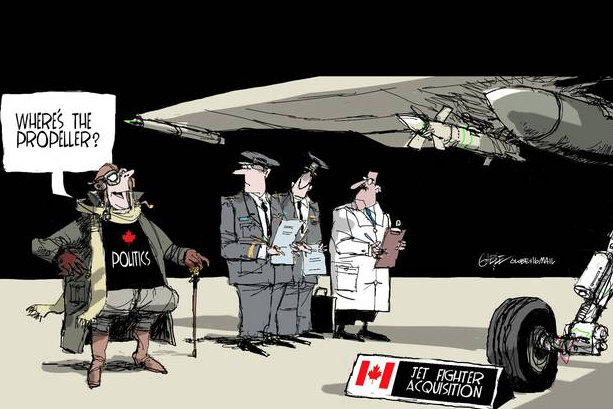 Because they never knew what they were doing, they were making it up as they went along, and it is Harper's legacy.

But at least now we have a good excuse to send Lockheed Martin this message:

(1) We don't need your lousy overpriced and overhyped jet. We need a fighter with two engines not one, because our big country includes the Arctic.

(2) We don't need a fighter with alleged first strike capability because we're not planning to attack another country with sophisticated air defences.

We're not interested in helping to start World War Three. And all we need fighter jets for is to patrol our own sovereignty.

(3) Any other company that gets the contract will also offer similar economic benefits.

(4) If you still have the contract to process our census, if you don't mind your manners you won't have it for much longer.

And lastly but not leastly, we have a million other things we'd rather spend our money on, than expensive fighter jets.

Like modernizing our medicare system, providing for our aging population, improving the desperate conditions in aboriginal communities, and repairing our crumbling infrastructure.

So take your shiny war toys, shove them where the sun don't shine. 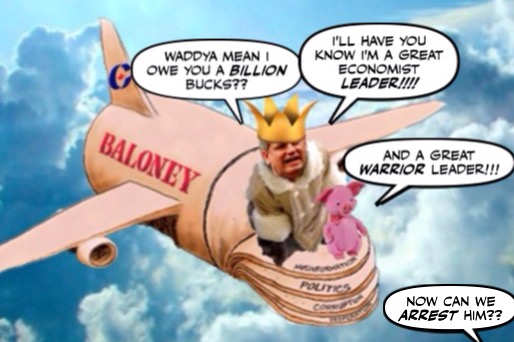 "It's not really a threat," Over said in an interview with CBC News. "I don't want it perceived as a threat, but we will have no choice, if Canada walks away from F-35, except to relocate work in Canada to other purchasing nations." The door swings both ways ...... Bye bye. FS

Simon, I always thought that Mackay was given Defense as a prize/bribe for his selling out Red Tories. No other Minister was given a white card to do pretty much anything they pleased. With his tiny hands, Mackay just went wild.

Remember when Balinda Stronich crossed over to the Liberals, and he went home to Nova Scotia to pick potatoes in his father's garden in his Wellies? Now that's a photo to search for.

Google search, I found your photo of Mackay in the potato field with hilarious comments on your blog. Why am I not surprised... Also noticed that a year later he called Stronach a dog in the House of Commons...that's one cool dude (not).

Mackay just seems self entitled. Now we pay for the mess.

What Lockheed is doing is not technically blackmail. It's actually a form of extortion. They are essentially saying, "You have a nice country up there. It would be a shame if something happened to it." That's a classic Mafia tactic.

A historical note: Lockheed was slammed down very hard in the 70s after it was discovered they bribed many NATO and SEATO members to get the "Deal Of the Century" aka selling the flawed F-104 fighter to them.

As much as I like a strong defense, it is expensive and not economically beneficial.

So yes, it is better to spend it on roads, bridges and the taxpayers themselves. %825 million could be better spent... even on InAction Plan Ads.

Simon, small point, do not call the F35 a fighter. It only became a fighter after the F22 fighter program was canceled. Before that is was a strike bomber. It still is a strike bomber. Cursiosly similar to the F-105 lead sled, the only fighting aircraft ever permanantly grounded by the USAF.

Simon, if what I understand about the F-35 is truth, and I follow The Galloping Beaver posts about the jet, other countries may walk away from this aircraft once Canada does. There are better financial deals and more capable planes that will suit our needs on the market AFAIK, and losing contracts for what could be a financial disaster may be lessened if we can pick up additional contracts by buying and supplying another airplane that is acceptable to Canada's needs. Tell lockheed Martin to take a hike.
GS

The Dutch government scuttled this turkey in 2010.

It is nothing but a money pit.

hi FS...yes, as if it isn't bad enough that Lockheed Martin is breaking its promise and blackmailing us, they're also lying and taking us for fools? Yup bye bye indeed, and don't let the door hit you on the ass on the way out...

hi TS...I'm sure you're right. It was a reward for selling out the Red Tories. Nothing else can explain why he was able to screw up everything he touched, and never get fired. And yes, I remember when split up with Belinda, and how he called her a bitch in Parliament. And even worse, I have an excellent picture of him, posing with his neighbour's dog, to try to guilt her out, and make the rest of us feel sorry for him. If he runs for leader of the Cons, you can be sure I'll be running that one again... ;)

hi TS...I should have read this comment but replying to your other one. Gawd. But yes, the very idea that he thinks that he's still leadership material after all he did, and let's not forget the way he treated the chief justice, is simply mind-blowing. But that's OK, I still have that picture of him chugging beer out of a bong, so that will give me an excuse to also run that one again... :)

hi anon...I was going to write that myself. But then I remembered Lockheed's close association with the CIA and the National Security Agency, and I thought I better not... ;)

hi Dan...that's interesting, and I see the pattern is repeating itself. For let's face it it, it is just a giant payola scheme. And no wonder the planes are so expensive. Unfortunately I have to admit that I love planes and flying myself. It's all my grandfather's fault who flew bombers during the Second World War. But if we are going to get new fighters let's make sure that they are used to guard our sovereignty, and not get us into any more useless military adventures....

hi Steve...thanks for pointing that out. You mean it can bomb but it can't fight? Jesus Christ somebody call the Auditor General.... ;)

hi anon...unfortunately that flying turkey seems to be gaining altitude rather than plunging to the ground. Denmark just announced it will be buying it after all. But the good news is that if we choose planes from another company like Boeing, they can bribe us with jobs in the military AND civilian aircraft sector. So yeah, Lockheed Martin can take a hike, and stop trying to treat us like some banana republic...

hi anon....as I said in my post the whole thing has been a comedy of errors. First they discovered one problem, then when they fixed that one they discovered another. And even as that turkey lost one feather after another, still its price kept going up and up and up. Apparently now they're telling us that we need to at least buy a few, because if we don't we won't be able to communicate with the American planes when we hold joint exercises, or bomb Morocco or whatever. It's insanity, and the sooner we can get that junker out of our systems the better...