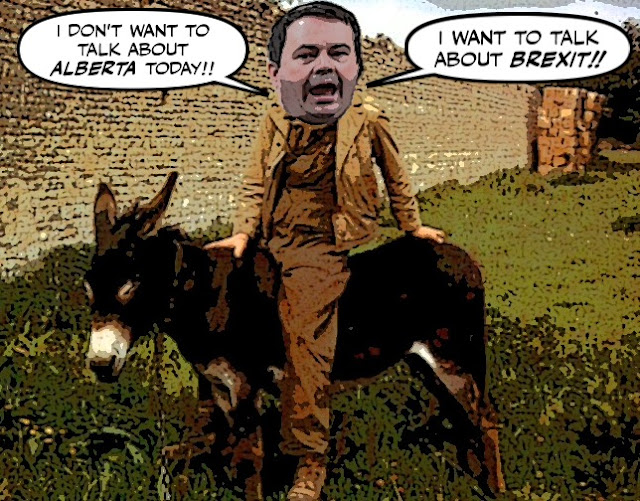 As you know I've been complaining about how Jason Kenney seems to be everywhere these days. The MSM just can't get enough of him.

One moment he's on his burro preparing to head to Alberta to try to unite the right, and evict the NDP commies from power.

The next moment he's causing some scandal on Twitter.

As he was doing again yesterday.

Veteran MP Jason Kenney — a possible top-tier candidate for the federal Tory leadership who is also reportedly mulling a bid for the Alberta Progressive Conservatives — has taken to Twitter to celebrate results of the referendum that have already sent shockwaves around the world.

Even though there was nothing for a Canadian to celebrate. And he got it backwards, it was the triumph of fear over hope.

And as John Ivison pointed out, the triumph of bigotry over decency.

But then of course Kenney wouldn't know what decency is, and is a bigot himself... 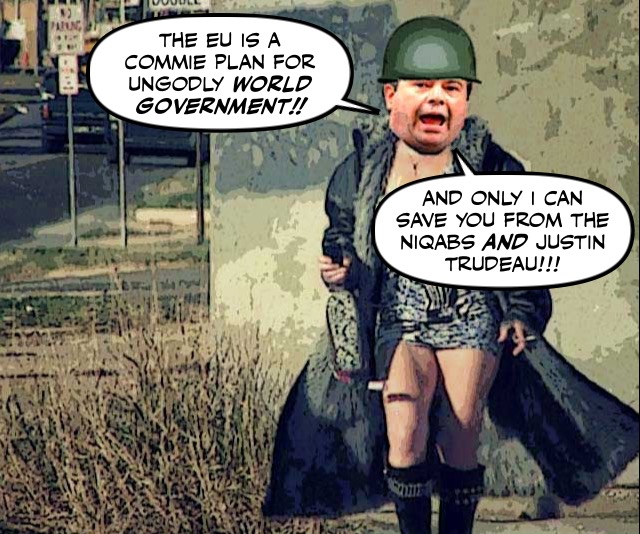 And he hates the EU and the UN as only a crazy teabagger or a Con hooker could.

But at least on this occasion he didn't get away with it, for the Twitter verdict couldn't have been more damning.

With Kenney scoring into his own net, or whatever...

Jason Kenney, a bigot and a buffoon.

Unfit to be the leader of anything.

A tiresome bore if ever there was one. 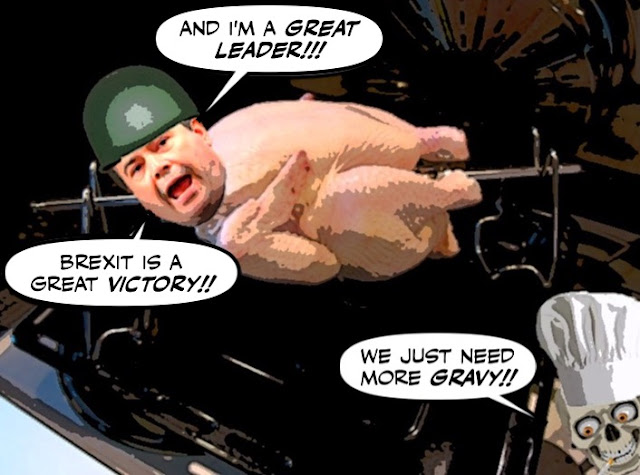 A sweaty man always in a big hurry to go nowhere. Should give up politics for acting.Bit roles as Boss Hog in a remake of the Dukes of Hazard, mayor of Smallville or mayor of Gotham in the early days before the arrival of Batman and Robin would be in character.Seems that when times are difficult there is always someone willing to step up and make them worse.How else can society ever get to a point of crisis?
RT

Unfit to be leader of anything? He's sure as hell gone a lot further in life than you have Simon.

The MSM can make him a "thing" but as hard as they tried with stuff like "New" Coke or Zima if no one wants it then it ain't gonna sell. Kenney is worse than Zima, to be fair.

Even though there was nothing for a Canadian to celebrate. And he got it backwards, it was the triumph of fear over hope!!!!! Seems to be a constant for morally depleted, racist, bigot, Kenny.... Fear over Hope!!!!!! Alberta CONS can have him, don't need that idiot in Canada's House of Parliament. Looks more like we will get our wish.....Kenny has left the building. Such a nice ring on a beautiful day in Ontario!!!!! FS

While UK/EU/Alberta politiks is on the table here, let's not forget about the inspirational Jim Prentice.

'Why should I do the hard ----?' David Cameron 'told aides he would rather quit than do all the work for his successor'
http://www.telegraph.co.uk/news/2016/06/25/why-should-i-do-the-hard------david-cameron-told-aides-he-would/

Hey. Don't use to much electrical power on that beautiful day in Ontario or do. The Libs need their money after all.

Really? And just where has he gone?

Yes Kenny has certainly gone a lot further than most of us, power, money, influence. Something to be admired? A true leader contributing to the betterment of society or a parasite that will ultimately leave his host weaker for the experience.Enjoy the experience but I think I will stick with Simon.
RT

he would play well as Boss Hogg.

Simon, we need to talk. Putting Kenny on donkeys gives donkeys a bad name. it has to stop. I'd rather vote for the donkey than Kenny, so in future could we have the donkey riding on Kenny???

Kenny is one of the batch of politicians (Rob Ford, Stephen Harper, Christy Clark, Jim Prentice, and most of the CPC) who with the free advertising they get from their sponsors bought and paid for MSM, rise on Icarus wings above their own level of incompetence. He is a classless, misinformed ideologue with little in the way of leadership qualities. He has certainly gone somewhere as Anon 10:04 so graciously pointed out, just not sure where that is.

He's made a lot of money, he was elected, he is in the public eye. What do you consider going far in life?

Hitler, Mussolini, Putin, Stalin, Castro, and Pinochet all share the same attributes as Kenny, so I'm not clear on what point you are trying to make.

What if you earn a lot of money, are famous, and maybe even got elected, but you happen to be a bad person, or just all around ass hole with no compassion for others, is that going far in life? CD

Somebody use your search skills. Kenney once tweeted congrats to Croatia for JOINING the EU.